Stephanie Inagaki unfurls her solo show this April 26th at Century Guild gallery. Titled, Metamorphosis, it’s a revelation of anthropomorphic self portraits, undulating transformation & Japanese mythology.  “By contextualizing the female body, hair, feathers, and crows into surrealistic compositions, I am creating my own mythology through these corporeal re-imaginings.”

Far from a Cindy Sherman dialect of using her own body as a political landscape, Stephanie’s portrayals are intimate and quietened to their stark minimalism. Earlier works render her subjects with lips full of feathers, strangled by hair. Like the Japanese pale-faced, long haired, horror girls that only move in fast forward or rewind, they seemed to embody that watery terror between the beautiful dead and the guilty living.

Just in time for her debut it seems Stephanie has undergone her own quiet evolution as an artist. A sensual introversion, a stoic resolve now imbue her subjects. They’re happy to morph before your eyes and this time they won’t drag you under, but rather invite you without trying. I had the pleasure of chatting with the very inspiring, soulful & talented, Stephanie on the eve before her exhibition. Enjoy!

Stephanie, your work deals with some very consistent, bold, juicy themes. Each piece looks like it’s from an artist exploring different facets of the one question – almost like your own personal haunting. So when you look back at your childhood are there any moments that stand out when you first became fascinated with anthropomorphism, death and the aspects of self that keep growing beyond it?

I have always loved animals and I grew up with dogs and rabbits. When we moved into a newer house when I was little, the next door neighbor gave me one of her pedigree Holland Lop racing rabbits as a moving-in present. I subsequently had about a dozen rabbits at one point. I appreciate the fact that my parents let me have pets because I learned at a small age to value life and to have responsibility over another life. I experienced their birth and passing as well. I cried so much every time one of my critters died and I would bury them in my backyard. I gravitated more towards cartoons with animals as the main characters than Disney princess movies. I felt more free to make up my own stories and environments with animals. My mom would craft with me and we would make felt animals together. My best friends growing up loved animals too.

My parents didn’t censor the movies I watched, and my brother and father’s decision to watch horror, science fiction, and action movies played a role in influencing my interest in the macabre. I also grew up in the generation of kids when The Crow, The Craft, and The Nightmare Before Christmas came out.

Your self portraits often remind me of Yurei – the Japanese ghost girls with hair like a rope between the living and the dead. Hair is often represented as a symbol of potent womanhood, of divine femininity or life source. What does hair represent to you?

Hair is all those things for me. It is also an identifier since I have always had long hair. I’ve had bangs or had the sides shaved but I have kept the length my whole life. It embodies strength which used to apply to both genders, not so much for men anymore unless you consider Orthodox religions. Hair also represents a sense of stability and fragility for me. It is such a powerful part of our body, attracting or repelling depending on how its presented. People easily pass judgement based on how it looks on any part of your body. It can be sensually attached to the body but becomes immediately abject once its detached. I find these dualities fascinating. The animal kingdom even bases their mating choices on how hair and horns look. Over the years I’ve come to use hair to represent all these ideas within my work. 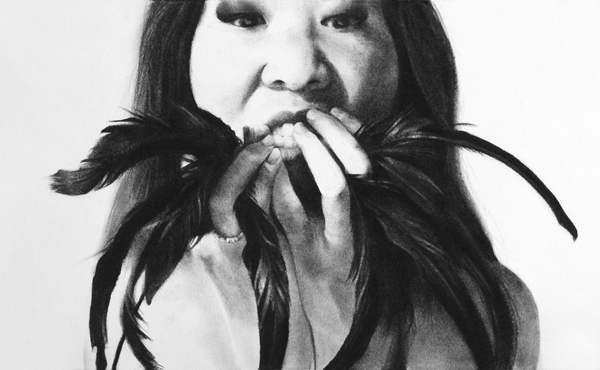 In your most recent Metamorphosis pieces your representation of self seems to have taken a more introverted turn. Cocooned and quiet she looks to be nestling into her transformation. Is this metamorphosis a hopeful transition? How much does it mirror your evolution as an artist?

It definitely is a hopeful transition and moment of transformation. I view birth and death as being cyclical. Death, whether it is physical or metaphysical, can be sad and painful, but it brings new ‘life’ or positive change as well. I aim to be conscious of my experiences, to always learn from them, and to have gratitude for that ‘Death.’ Through the actions of taking responsibility and ownership, I can become more self empowered. As an artist, it has greatly influenced my perseverance and motivation, to continually be better at what I do and who I am as a whole. I wouldn’t be able to evolve if I was not healthy in mind and spirit. 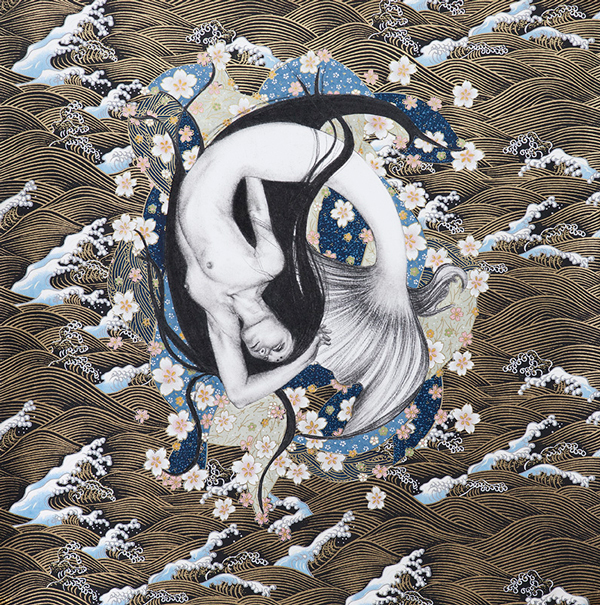 Multidisciplinary is a term we quite readily attach to an artist but I’m really interested in how this translates into a working creative practice. You have your own jewellery line, you work in sculpture, drawing and now collage, how do you pull all of these aspects together? How do you choose what to work in?

I have an underlying aesthetic sensibility throughout all the work I make that I believe weaves the connecting line. I tend to go through waves of what I’m focusing on and will switch between jewelry and art. Not many people realize that I went to school for sculpture (I am happy you brought it up!) since the two galleries that have represented me have only shown my drawings. I sculpt all my original jewelry pieces but I do miss sculpting on a larger scale. I have a few in mind that I would like to make but I don’t have an installation space to create them in. As for choosing what to work in, creating drawings has best served my narratives. The concept usually dictates what materials I use. With my jewelry and accessories I work with a range of materials so that it can be accessible to everyone. I love the arts of the Old World so many of my accessories are amalgamations of fabrics and findings from Japan, the Middle East, Europe, and India. 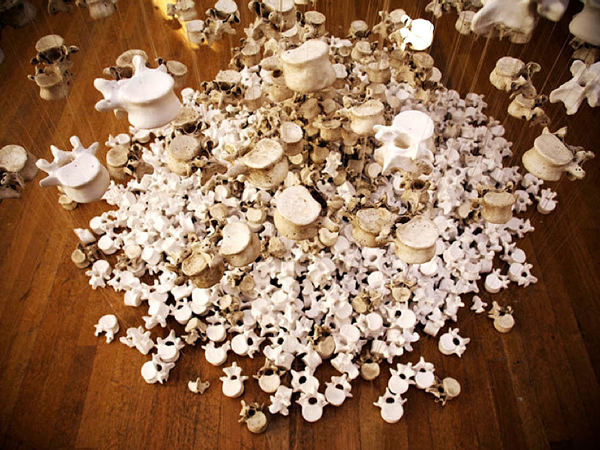 What does a “typical” working day look like for you?

The first thing I do is turn the kettle on to make my bulletproof coffee and feed my cat, Emu! I workout afterwards and then I get my day started. Depending on my momentum and what I’m working on, I will keep working until midnight or later.

Not at all! I have quite a few exhibitions scheduled this year and some things I can’t mention yet. I will be making new work for an exhibition in September at Century Guild with my friend, David Mack and Bill Sienkiewicz. I’m really excited and honored to be showing with two very great and seasoned artists! This show will coincide with David’s new book, Muses, a collection of drawings, including some of which I sat for. I’m also in a collaborative group show that my friend, Allan Amato, is curating. He’s photographed artists from around the country and we use our own mediums to create something new on top of our portraits. The exhibition will be held at La Luz de Jesus in December, accompanied by an exhibition catalog. I finished my drawing for this show a year ago and I have been dying to show it! It was the impetus for me to start using colour and collage.

I am incredibly blessed to be surrounded by talented friends who believe in me and support me. I hope that I am able to do the same for them. No one gets to where they are solely on their own, no matter how hard they work. 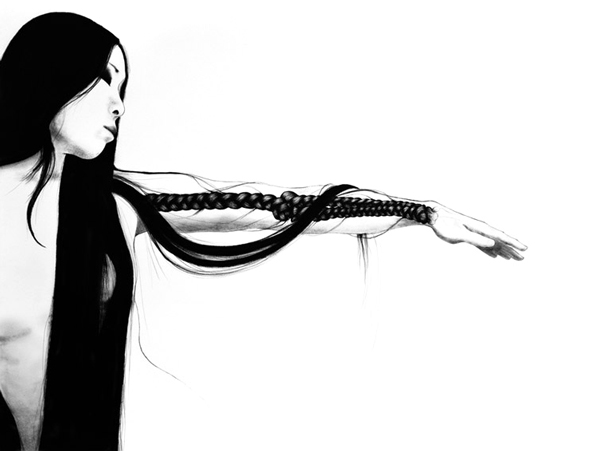 Quick 5
If your latest Metamorphosis Exhibition had a playlist/soundtrack what would be on it?

We’ve seen you morphing into rabbits, fish and birds but what do you think your totem animal is?

I would have to say crows. They carry a certain stigma in Western culture but for me they symbolize Love and Loyalty, which I truly value. They generally mate for life and are very intelligent, resourceful creatures. They take note when we treat them well or poorly, telling the rest of the murder and generations after.

3 words that describe your creative practice

If you could do a collaborative project with anyone throughout history who would it be?

Dali!
Complete the sentence – If humans didn’t have the arts . . .

we would not have the capacity to progress intellectually and culturally. The arts creates the spirit and soul of the people. During massive takeovers and wars throughout history, the arts are usually the first thing to be destroyed because once you take it away, you kill the spirit and the identity. As with most kids and young adults who want to pursue the arts, I was constantly asked by adults, what the point of my career path was. These adults were lawyers, scientists, and engineers. I told them they would have no music or movies to be entertained by. They would be wearing sacks for clothes because no one would be designing their nice clothes. That made them stop asking me every time I saw them during the holidays. :) 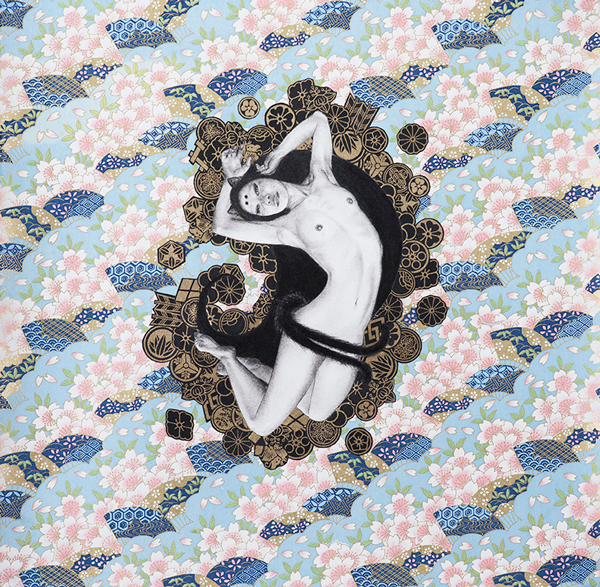 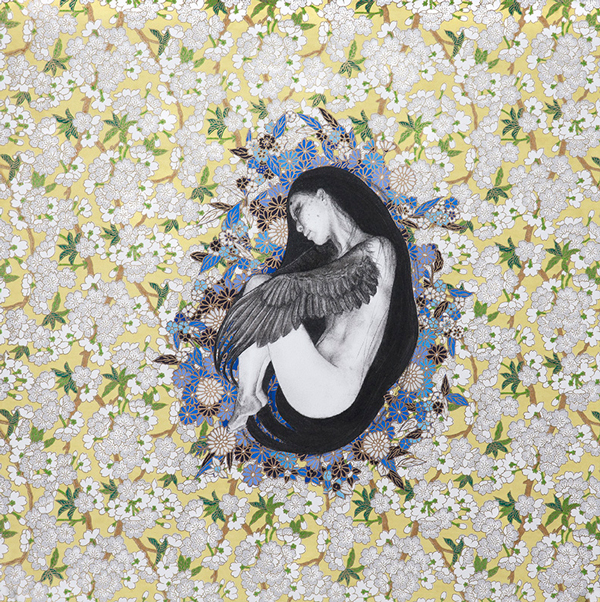 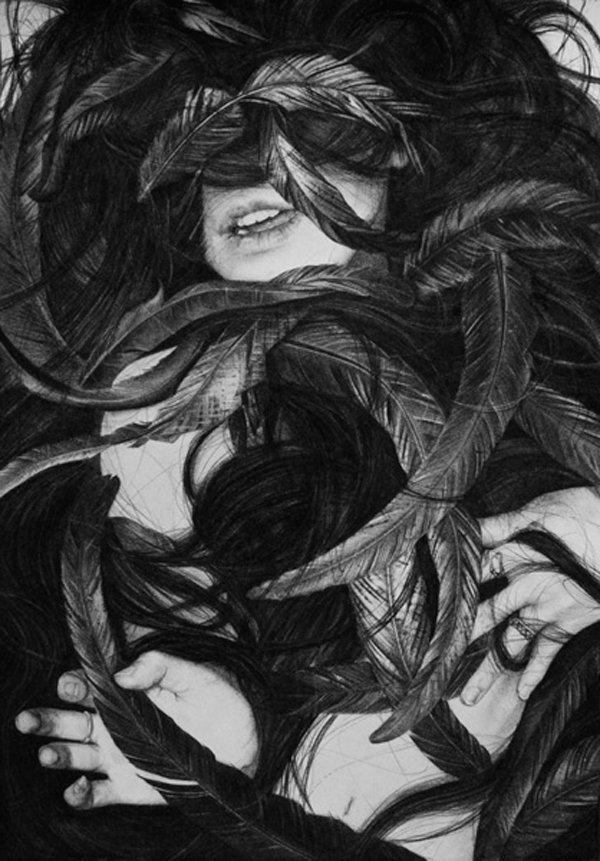 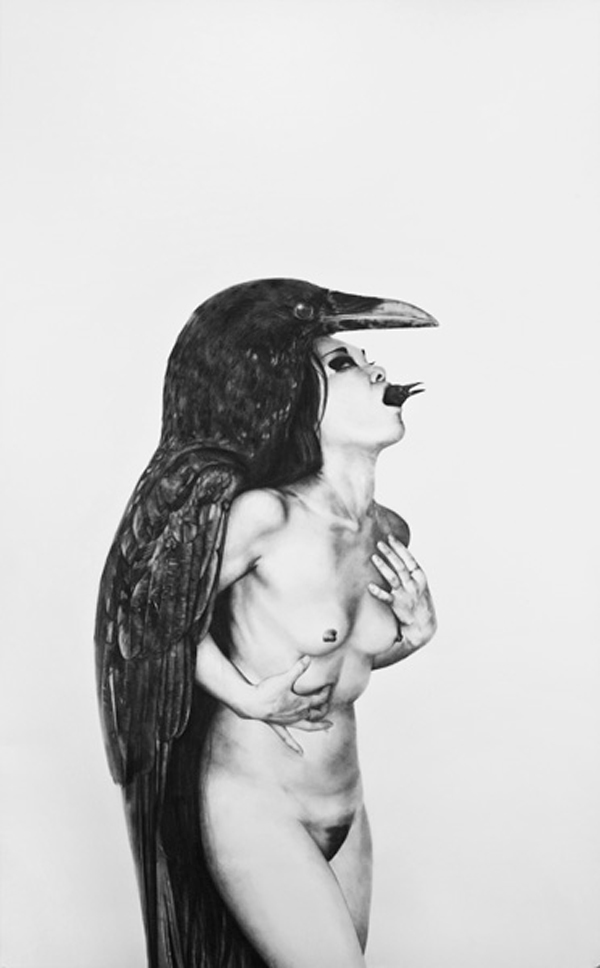 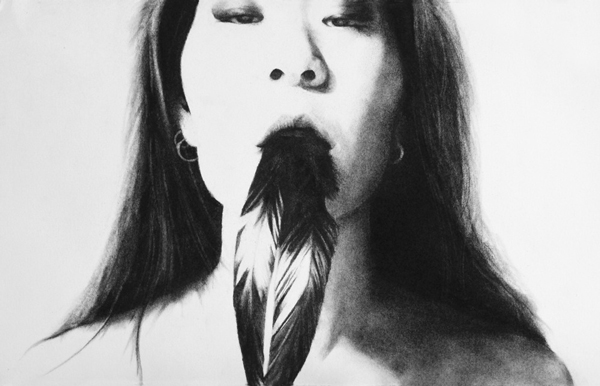 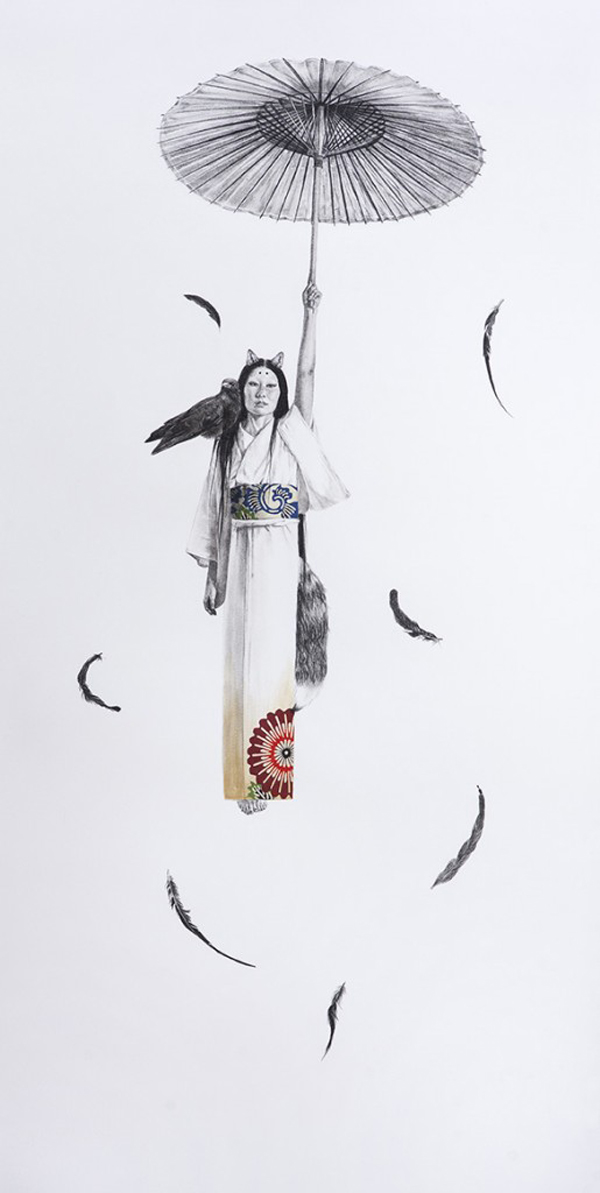 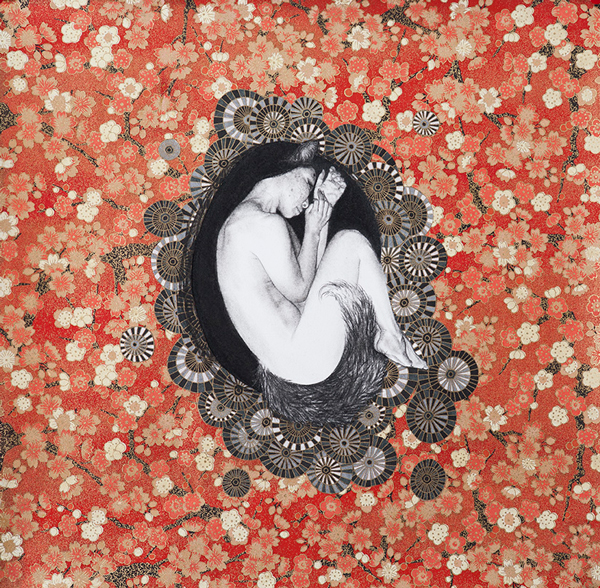 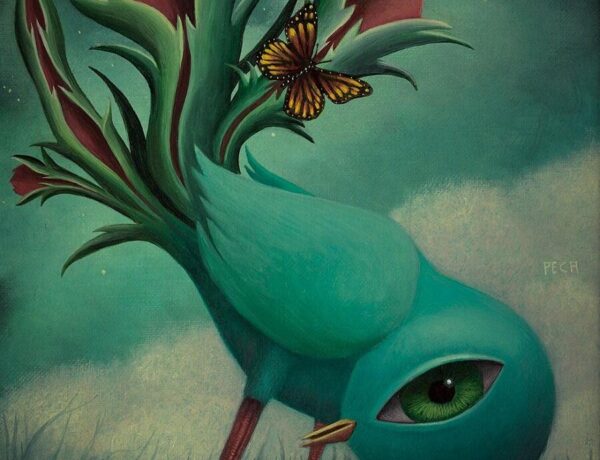 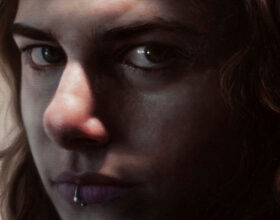 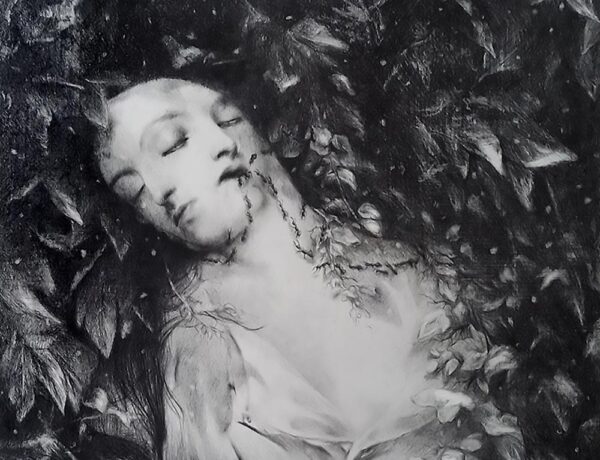 Check out some of the amazing Beautiful Bizarre Art Prize Traditional Art entries!

Julie Filipenko: Drawing Us into Her Sweet Animal Kingdom