As the rabbit dashes past the protagonist and frets about its lateness, it pulls out a watch from its waistcoat before running down the hole. Alice, sitting by the riverbank with her sister, who is reading off texts from a book, follows the rabbit and falls into the deep hole resembling a well. As she lands on the floor of a foreign land, she catches the sight of the rabbit vanishing around the corner. From there, Alice journeys in the Wonderland, a dream state of euphoria in utopia and the primary source of Puntita Meeboonsabai’s influence.

The movie adaptation evokes fantasy and wonder. Every twist and turn in the plot makes me gasp in surprise.

Supernaturality has become the anthem Puntita Meeboonsabai sings in her art. As she picks up her brushes from her canvas-clad studio, she steps back from the blank slate, imagining a regal palace covered in gold and bronze. Inside the grandeur of her interpretation, a whale brushes against the dangling chandelier, a crowned-king dolphin sings its heart out over a microphone, a peacock observes the chaos, four doves attempt to escape the catastrophe, two parrots hover over the whales, a tiger tears a classical painting apart, a giraffe whose neck has reached the second floor peeks at the commotion, a pigeon lazes on the rails, and the poor Red Riding Hood, a reflection of the artist herself, hides in plain sight, surprised and confused.

This is the album cover for the pop-band Whal & Dolph. Its theme is about embellishment and ornament. Since their main characters are a whale and dolphin, they asked for a personal portrayal. This is the byproduct of our collaboration for WILLISHMARA.

Realism and surrealism infiltrate the canvas of Puntita Meeboonsabai. She envisions her audience entering her world of fantasy, as if they were watching a movie, through the strokes of her brushes and the contrast of light and dark hues in her imagery. To concoct a painting that speaks of this ethos. The Thai artist eyes bold and fancy colors, places, characters, and storyboards from literature, photography, and human narratives. As she soaks in the nuances of her research, she imagines a supernatural theme in her mind, weaving the poetry of what the naked eyes fail to see and the wonderland her viewers resonate well with. Just as she finishes curating the motif of her painting, the characters, settings, and scenarios overflow instinctively, fueling her hands to snatch her tablet and sketch the digital draft. After devising a blueprint to follow, she carries her tablet to her art space, thumbing which brush to use to draw the outline on the canvas.

When the night dawns, the crescent moon shows up in the cloudless sky. In the nook of its sharp tip, the Goddess of Moon sits, her hair swaying against the breeze of the cold evening. She attempts to conceal the shiver that runs through her veins as she covers her breasts with her palms, but fails. Fortunately, a cloak made of leopard skin drapes across her back and acts as her cushion to sit on, making her feel comfortable to watch the tigers, pigs, dogs, and birds soaring high around her. As the animals accompany the goddess for the evening, golden lamps hanging on their open mouths to light up the space, they chase each other around the maze of pillars, hoping to scratch or bite some skin to win. This artwork titled Last night (leaving from undesirable world) demonstrates the brainchild of Puntita Meeboonsabai in narrating her penchant for fantasy: a maelstrom of nature and mythology intertwining in one’s daily life.

I paint every day, even during my days off from my full-time job. I prefer it over working as it is more than just a hobby.

The artist raises her artistic vibrations and spiritual life in art as she lives a philosophical life with nature. To escort her ceremonies in making art, she watches documentaries about animals, forests, and traveling, keeping tabs on the visuals and taking down notes on the history and background of the features that strike her the most. When she steps into her ‘zone’ during her art conception, she listens to the sounds of the jungle and the journey of the animals into their environment. The growls, rasps, and screeches pique an idea or carve a certain trail for the artist to follow, allowing her to place the thought from her mind into her painting. Before the strike of the pandemic, she would rifle through the search engines to book flights to other countries, bringing her art materials with her to draw in the forests, by the hills, and on the grasslands of the countryside and city outskirts.

I have never loved my work. To explain, my most favorite piece is the one I recently drew. Then the next day, I will realize that I love another piece more than the previous one.

To celebrate its new reign in the animal kingdom, the tiger invites the fauna of nature into its garden abode, made of ceramic beams and a roof enshrined in pink flowers, to feast over a grand buffet and growl in conversations. What should be a harmonious gathering turns into a catastrophe. Dogs with wings fly to fight the white doves in the air while tigers and dogs on the land bite and claw each other, rolling around the tumbled-over bowls of fruit, or gaze outside the shelter, at the scenic view with the blue sky and mountain ridges on the horizon. The heat of the competition flares enough to make the goddess, or perhaps the wife, sitting on the tiger faint in exhaustion and confusion. In the chaos of celebration, Meeboonsabai may be nowhere to be found in the painting, but the spirit of her fantasy-filtered mind lives in the imagery.

“People have asked me this question, and I always answer that I have never loved my work. To explain, my most favorite piece is the one I recently drew. Then the next day, I will realize that I love another piece more than the previous one. Each of my work has flaws. If I feel that an artwork of mine is 100% flawless, I will not make it anymore since it is already the best. But if I were to choose a series that is dear to me, it would be my bachelor’s thesis project as it introduced my art to the public. It resembles telling the world how a recently graduated young artist enters reality.”

Before graduating at Silpakorn University with a degree in painting, sculpture, and graphic arts, the artist presented her dissertation Freedom Of Women, an anthology of paintings depicting women in power and empowered.

“It is about the attitude of society towards a woman. It is a creation of an independent space for an expression, thought, and imagination through symbolic interpretations. It is an implication of the social characteristics that are currently occurring. It is a demonstration of the bias in tradition from the past until present. This thinking claims the usual men-over-women mentality in rights, but it is time to shed light on giving rights to women, in Thai society for my case, through laws, new traditions, and changed behaviors that contribute to the creation and promotion of these rights.”

Gazing at The founding ceremony of Sir Tiger, Puntita Meeboonsabai’s political spirit adorns the painting with a Queen wearing a gold robe and crown in a castle filled with her usual dogs, tigers, birds, and now, dangling monkeys from one chandelier to another. As the Queen stands before her fauna crowd, behaving in their best manners to respect the ceremony, she unsheathes the sword, stands up from her throne, and walks towards the crouching Sir Tiger who presses his paws on the carpeted floor, accepting the blessing from the Queen as she grazes the hilt of her sword on his body. The scene alone creates an equilibrium of acceptance rather than tolerance in the equal power and rights of human beings, regardless of gender. It shows the prowess of a woman’s leadership commanding the crowd without violence and words, but through an act of service and valor.

Each of my work has flaws. If I feel that an artwork of mine is 100% flawless, I will not make it anymore since it is already the best.

Fantasy and politics glazed with sweet irony, a philosophy of Meeboonsabai’s artistry. To lay one’s eyes upon every painting of the Thai artist means allowing the self to be drawn into her perception of fantasy and the magic that comes with it. If the modern Alice ever falls again into the rabbit hole, she may just find Puntita Meeboonsabai in a revamped dystopia, guarded by her winged dogs and crouching tigers, while meeting the third queen of Wonderland.

Bio: Matthew Burgos is a zealous storyteller, an indie-folk playlist devourer, a self-proclaimed maverick, and a die-hard, 90% dark chocolate glutton. When he narrates stories, he carpets the chronicles with poetry, empathy, and humanness. For every story he jots down, he envisions delight and satisfaction to every reader’s mind. His curiosity streams when he converses with people, compiling a mountain of questions for them to answer to. It’s no wonder he yearns to write about them after the conversation. 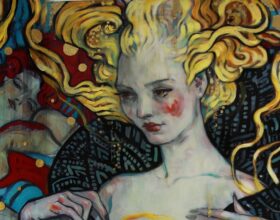 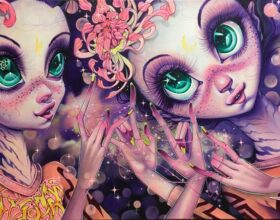