Ole Marius Joergensen is a Norwegian fine art photographer known for his atmospheric, cinematic and painterly works. Like in movie stills, the characters in his photographic series are captured mid-action at the defining scenes of the stories he tells. A storyteller at heart, he knows this will encourage us to pause and ponder about the narratives that are being unfolded, as well as the messages he tries to put across. Through effective usage of colors, he sets the tones of his stories. He also composes his images in ways that encourage our eyes to take all of the details in: The characters, their surroundings, and the situations they are in. So much so that we can almost envision the things that are about to happen. 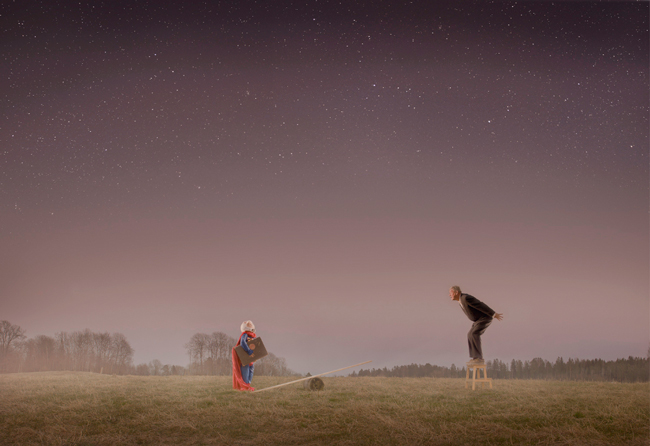 Many of beautiful.bizarre’s readers are familiar with your works, especially those who’ve read a preview article on your exhibition at Baker+Hesseldenz last November. But will you tell us a little more about yourself and how you became a photographer?

I have always been fascinated by movies, and at one point I wanted to pursue a career in the film-making industry. I, therefore, started my film studies in the UK. However, during that period I realized that movie production is an extensive process that is very difficult to complete alone. I was simply too enthusiastic and impatient. I then realized that it was just as easy getting my message across using photography.

I also found it very challenging but even more so rewarding to tell a story in a single photo or in photographic series. After two years of sailing “the film studies boat”, I disembarked and joined “the photographer ship” instead. I simply loved the spontaneity and being able to get a complete result in a matter of hours compared to months, as in the film industry. One simply has the chance to explore one’s creativity in much greater detail because of the rapid results. 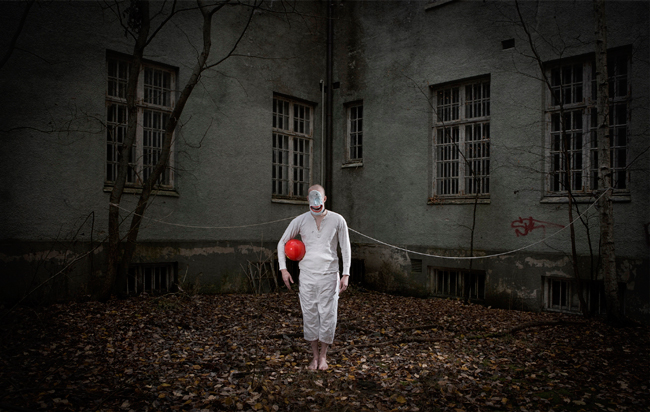 I used Photoshop frequently in the early days of my career. I loved assembling layer by layer, especially in the context of cityscapes. Nowadays, I prefer to do as much in-camera as possible because I find it more fruitful. I would much more like to capture the atmosphere on camera rather than creating it after the fact on a computer. It is definitely more challenging, but I think it gives an overall better quality and result. It is also much more adventurous. E.g. Dragging all the equipment through all kinds of places and having to fight the elements is really rewarding. 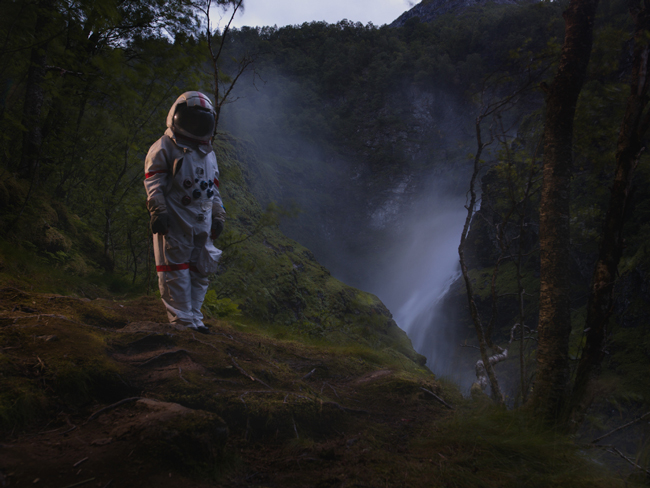 Would you share a little bit of your pre-production and production processes with us?

Yes, and this again comes from my fascination for movies. My current work process is actually fairly similar to the film industry. I have my own location where I have built a set that very much resembles the film industry workflow. Previously, I was very much limited by the location I was able to find. This often resulted in having to adjust my initial idea. Instead of having to find the perfect location/set, I can now build it. This enables me to follow my ideas exactly.

I sketch everything on paper to fully visualize the idea. The next step is to search for the right props in second hands shops and flee markets. This is a part of the process I really enjoy because of the many well-hidden treasures I find, especially in rural shops. I, then, assemble it all at the set before adding lights. I don’t have any assistant, so I test everything on myself first.

Do you (still) incorporate cinematography lighting setups in your works as a photographer?

Yes, this is an important point. I use cinematic light setup/sources frequently to put emphasis on certain aspects of the object. I also often find this adding cinematic realism to the photos. More recently, I find it more and more important to not only include the light, but stress the source of it. 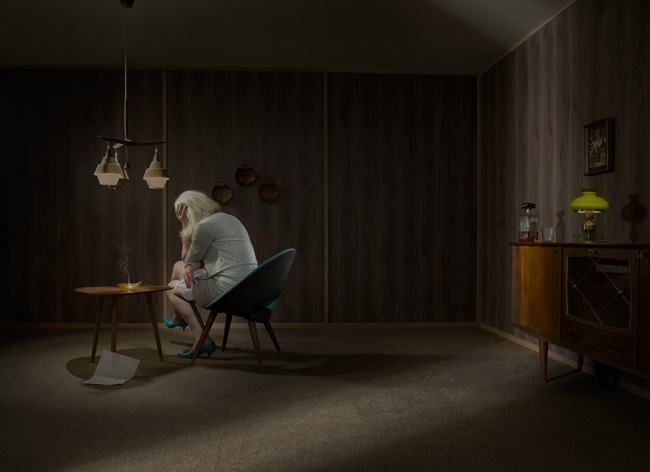 What does photography mean to you?

Photography is an instrument for expressing myself and communicating my artistic ideas. Ironically, I do not do photography a lot in my spare time and I don’t take much pictures of friends and family.

What’s your view on digital vs film photography?

During my photography studies I was very into films and dark room and didn’t like this digital thing that came sneaking up on us. But I went over to the digital world like the rest of us. I am not very fond of exposing myself to chemicals, so I don’t miss the dark rooms. I also like getting the result immediately so digital is perfect for me. 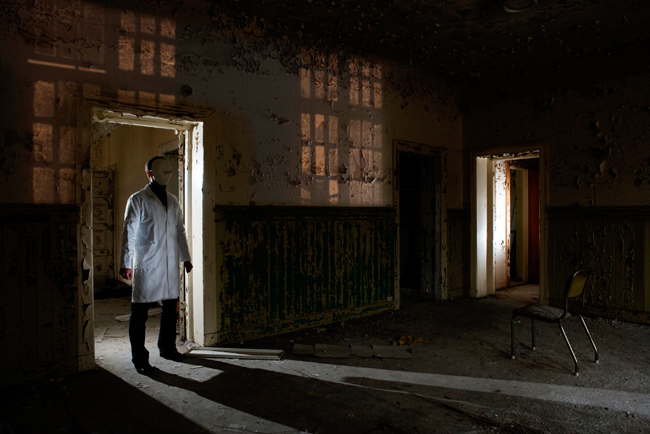 What are the sources of your inspiration?

It is hard to pinpoint exactly, but I have always felt the need to be a storyteller, which is basically what I do using a camera. I often get ideas when watching movies or going to art galleries looking at paintings. There are also a handful of photographers who gets me in a creative mood like Gregory Crewdson, Annie Leibovitz, and Erik Almas. They have had a profound influence on my career.

I am also very inspired by paintings, an interest I could easily have made a profession, had a day had 48 hours. 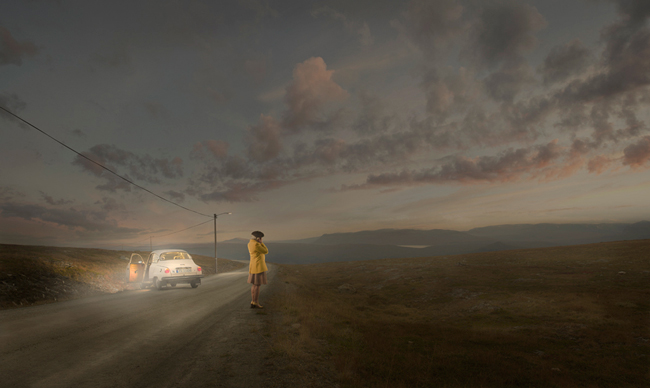 If you have to choose, which three images would you consider your best works?

I am not sure if they are the best ones, but they are the most important ones to me and represent big changes in my creative path. The first one is ‘Woman in a bathtub’ (from my B 31 series) at a abandoned mental hospital. This idea came so strong to me and it turned out precisely as I envisioned. It was also with this idea that it all begun. I started thinking in forms of series and having dreams of showing them in a gallery. 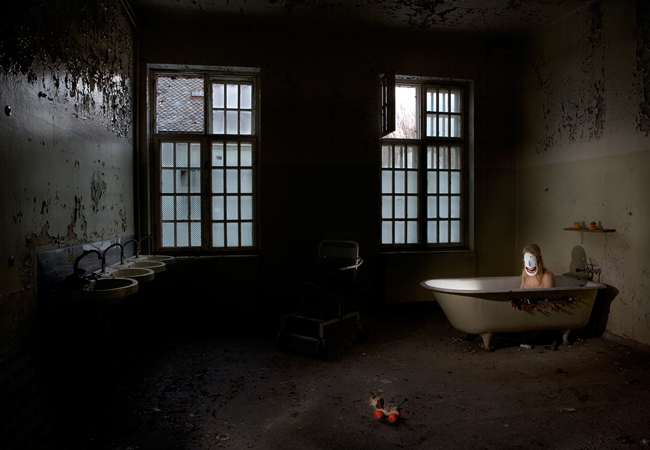 Numero dos is The brave one (No superhero). It also turned out perfectly. It was shot at 5:30 in the morning during sunrise. It was only me and the superhero present at the beach. It was a beautiful morning experience. This one idea just came to me. After maybe 5 month, another Superman idea came and I understood that it could turn into a great series. 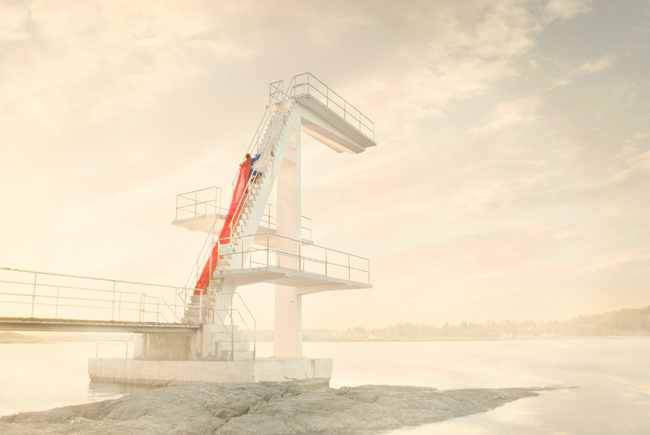 Number tree is the Penumbra motel (Peeping Tom). It was my first shot at a set. I was very nervous because I had never done anything like this before and I was afraid the illusion would not work out; but, luckily, it did. It doesn’t look real but cinematic-real, which is what I am trying to gain. 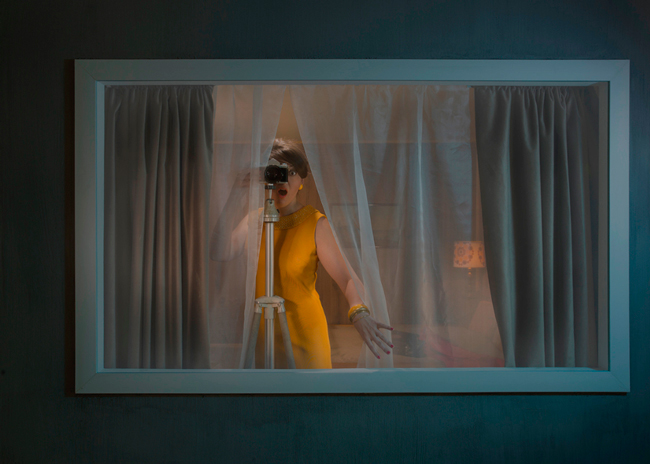 What are you working on at the moment?

I am currently working on finishing the Peeping Tom series. It might only need 2-3 more photos to complete that series. I am also chewing on a Hitchcock project and would one day like to do a project about Mozart (he is my numero uno).

Also, I am working on finding a gallery who wants to show my work. 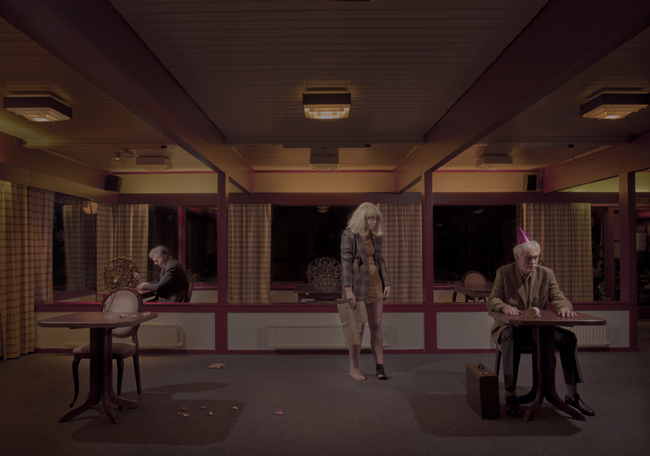 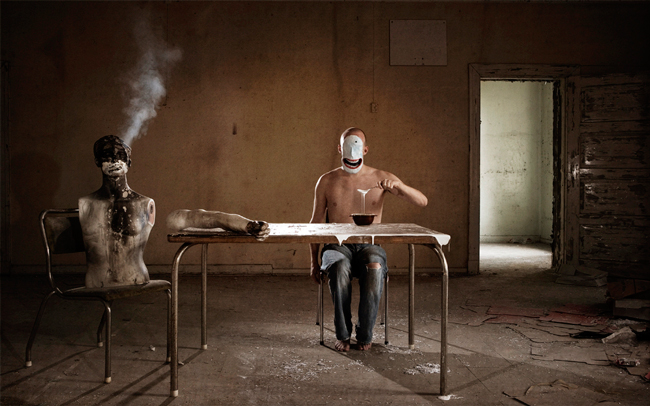 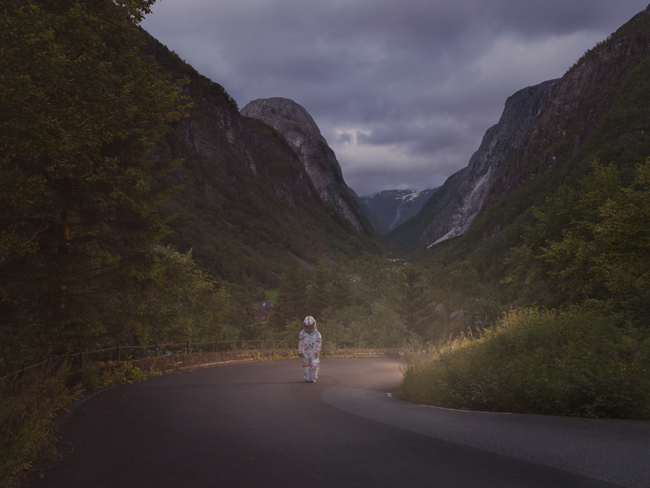 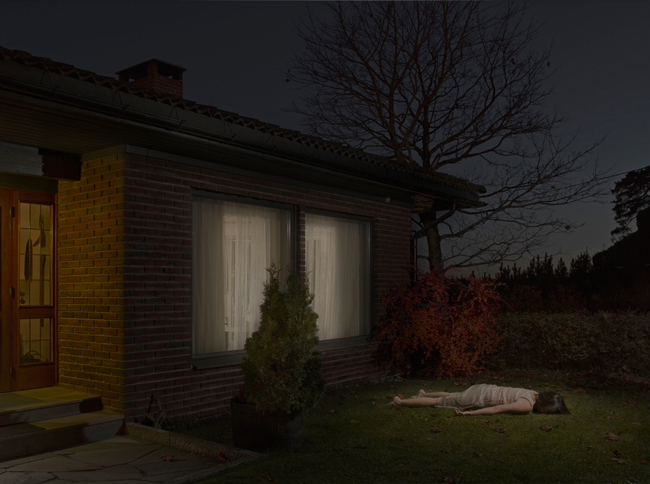 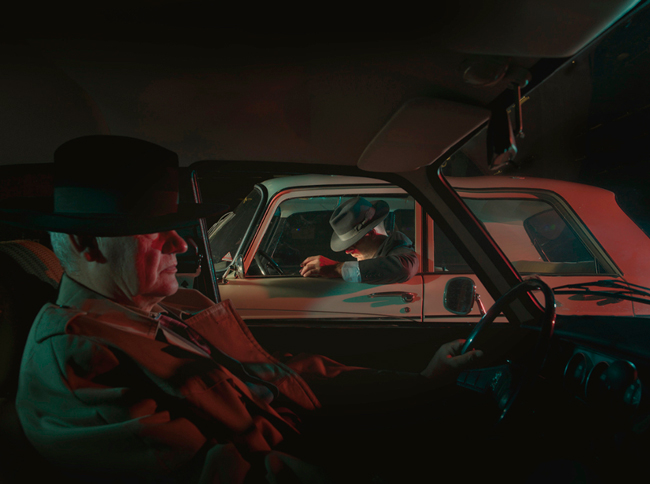 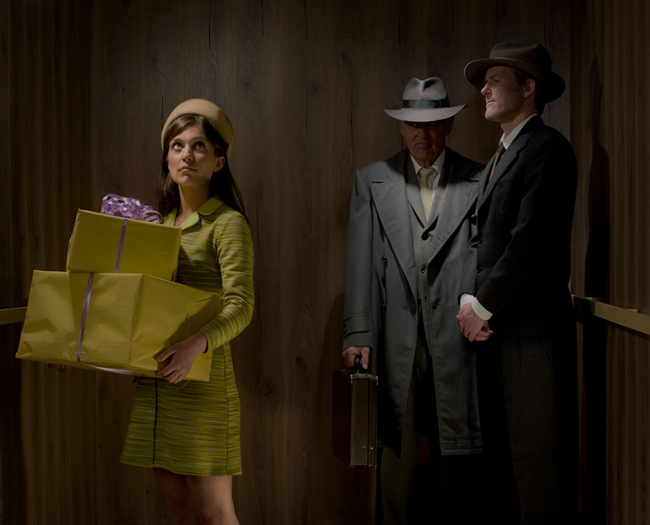 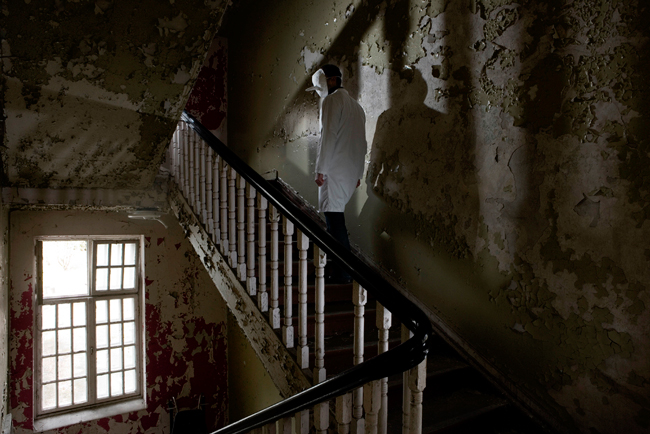 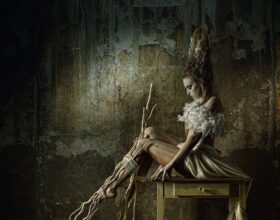 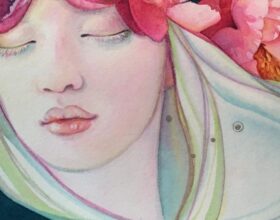 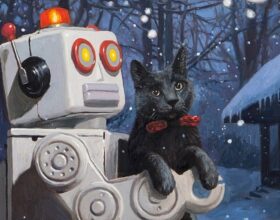