Once upon a time, two artists were working on separate offbeat projects in bubbles of their own. Little did they know a chance follow on Instagram would end up changing both their lives. Perry Logan, originally from New Zealand, was collecting and recycling wood salvaged from the 2011 Christchurch earthquake, the scars of which can still be seen on the landscape today. From these marred and damaged scraps, he carved quirky characters as an escape from his day job. These were occasionally shown in galleries and on Instagram under the moniker Peretopia.

Meanwhile, in Australia, Anika Ramholdt had recently graduated with a PhD in Fine Art and was creating her own offbeat paintings, forming a semi-biography visual diary in a variety of mediums, under the pseudonym Ginger Darkly. Each created without knowing the other existed until fate or perhaps more precisely the algorithms of Instagram exposed Perry’s work to Anika. Mutual admiration, taking a chance on one another’s skills and taste and a new collaboration was born: Darktopia.

You have to be brave enough to not fear destroying the things you’ve created. There’s always more, always another idea or a better idea.

The pair of you create unique wooden art toys with quirky twists. How did the idea to collaborate come about and what strengths do you each bring to your collaborations?

We followed each other on Instagram and over time we became friends. Perry thought my drawings would make good sculptures and so we decided to try one. Perry never enjoyed the painting component and I can’t sculpt, so now we both get to do what we enjoy whilst creating something better than either of us could achieve alone (to our eyes anyway).

Did you know each other before following one another on Instagram or was it a connection simply through your individual artworks?

No, we didn’t know each other. I followed Perry, he followed me back. I remember it gave me a buzz at the time because he seemed cool. Turns out he is cool.

It’s always good to find people that are everything they seemed. Can you remember what that first collaboration looked like? How did you collaborate an ocean apart?

I drew a piece of Perry and I called ‘Let’s Go For a Walk in the Fog’. Perry loved the round, oversized head I gave him and the simple armless body. He thought it would translate well into sculpture. He would send me videos of each step of the sculpting process to see if I liked what he was doing. I was blown away by how effortlessly he put it together. It was probably the smoothest and easiest collaboration we’ve ever had. I’m not happy about my painting because I was still figuring things out and feeling terrified, but the piece as a whole will always be a favourite.

The pair of you have continued that dynamic with Perry sculpting, while you paint and finish the pieces. What does it take to bring a sculpture or a series of sculptures to fruition? Do you start with a shared vision for each piece or is the process more organic and independent?

We used to throw sketches back and forth until we settled upon a design. Now we prefer to surprise each other. Perry sculpts what he wants (usually after we’ve decided upon a theme) and I paint it, however, I see fit. That said, we have a pretty solid understanding of what the other likes so I think we collaborate intuitively.

Solid wood becomes more rare and precious each day and it’s nice to turn it into something that will hopefully be treasured. It has a beautiful aura.

How long does it take for you to decide on a theme?

I think there’s always a bunch of themes we’d like to explore, so it’s a matter of settling on one. It doesn’t take long, but sometimes our mood changes and the theme changes with it. Sometimes the theme evolves because the work takes its own path once we start.

Is that partly because of the challenge of working with wood which I assume is not a forgiving medium?

We actually both find wood very forgiving. Perry has been working with wood since forever (he has a day job as a builder) and has an innate understanding of grain and balance and all the technical stuff.

I found it very intimidating at first, adjusting to painting on a three-dimensional surface and being way too precious with my process. But I always remember something my supervisor at university told me… During her time as a university student, she was supervised by a nun. When writing her exegesis, said nun took no prisoners in the editing process. “You have to be willing to burn your babies!” the nun declared. I’ve always taken this advice with me. You have to be brave enough to not fear destroying the things you’ve created. There’s always more, always another idea or a better idea.

The braver and more destructive I’m willing to be with our sculptures the better the finishes I discover. Knowing that anything can be undone allows me to be bold. Perry will pick up a sculpture that I think is amazing and throw it straight in the fire. I’ve done the same with paintings. A kind of alchemy takes place that allows better ideas and practices to materialise.

Initially, Perry was using wood repurposed from the Christchurch earthquake. He has now joined you in Australia with the pandemic making collaboration by distance increasingly difficult. How has the move to Australia changed the selection and finish of your sculptures?

I buy a lot of secondhand furniture at our local waste management centre. Inevitably I get sick of it and it becomes good fodder for sculptures. There’s always a table leg laying around or some such. I’m always surprised how much Perry can resurrect from so little. Solid wood becomes more rare and precious each day and it’s nice to turn it into something that will hopefully be treasured. It has a beautiful aura.

The works have a distinctive playful style. What drives your imagination and where do you find your inspiration?

I often joke about secretly recording Perry when he’s discussing films and books, I think it would make for an interesting podcast. He’s an encyclopedia of popular culture and his taste is as eclectic as it comes. What he doesn’t have though is the genuine insanity that I bring to the table.

That encyclopedic knowledge of pop culture seems to cross over to the visuals you use as well. Much of the styling you use to showcase your works have a retro 1980s vibe to them. Is there a love of 80’s movies and TV series behind the scenes?

Of course. I’m not sure if neo-retro is an established term but I’d say that’s what we like. One of our favourite films is It Follows by David Robert Mitchell (2014). It’s a dreamy intersection of nostalgia and alternate universe contemporary. It has an 80s teen horror vibe whilst incorporating strange, imagined technology in a super subtle way. I suppose when we started Darktopia we imagined a retro dystopian universe that would exude that 80s lo-fi, plaid den warmth.

Your works always have titles that make people smile almost as much as the works themselves. How do you decide on titles?

Naming is probably the most enjoyable part of the process. We sit the finished pieces on the coffee table and just look at them for a few days, throwing out any suggestions that come to mind. We know it’s the right name when we both say “OMG Yes!”

Are there any names that haven’t made the cut yet but are waiting for the right sculpture to come along?

Have you ever strongly disagreed about a piece or do you avoid this by working separately and trusting the others’ vision?

Yeah, we disagree all the time but I think we’ve come to realise that letting each other do their own thing works best. Just like in all areas of life, it pays not to be fixed. No piece is ‘the piece’, they’re all just experiments and you have to give each other the freedom to explore.

I imagine that is both freeing and challenging at times. What are some of the challenges and benefits of working together as a creative couple?

It’s easy to overthink the work you do independently. Working together takes away some of the pressure and inertia and lightens the load. The process becomes more fun and playful. That said, we both have very busy lives and a lot of commitments to fulfil, so finding the time to be creative is challenging.

There’s certainly tension as deadlines approach and the odd bout of silent treatment when we’ve had to renege on promises due to one or the other of us being overwhelmed or impeded.

Have you got anything planned for the future you would like to tell us about?

We just don’t have the time or capacity at this point to be a production house so our focus is on creativity and exhibiting when we can. We have a special relationship with Quirky Fox that allows us to be moody and self-indulgent.

What do you hope people take away from viewing your artworks?

I suppose they’re really intended to be small pleasures. Touchstones of humour and whimsy to pepper your environment. Colourful moments of respite and ritual. I have a few scattered about that Perry gifted me before we worked together. They make me grin, they add life to nooks and crannies and offer a moment of reverie. They’re not really big enough or bold enough to be decorative homewares or to tie a well-styled room together. They’re just tiny visitors from other worlds. 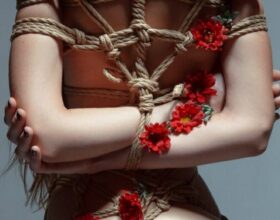 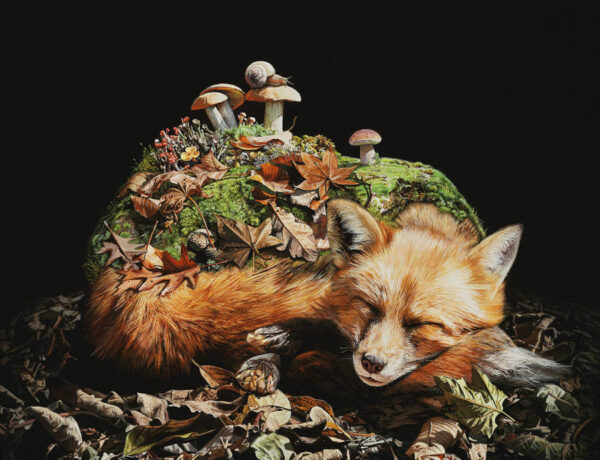 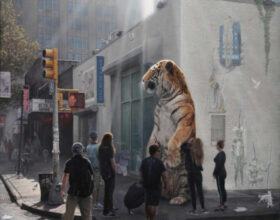