Clasped in the beak of a swooping swallow, a pearl appears in the latest work of Heather Denison. While for many the pearl symbolizes wisdom, for Heather the meaning is even deeper; symbolic of love and support. This pearl will feature in many of the works of New Zealand artist, Heather Denison.

From childhood sketches in Zimbabwe to oil painting in New Zealand, art has been a constant of Heather Denison’s life. Raised in Zimbabwe, Heather’s early years were filled with creativity and exposure to art, artists, and nature. Visiting nature reserves with her family to watch animals gather and interact only grew this fascination. Soon small creatures began to make their way onto the margins of Heather’s school work.

Ready to leave high school but knowing the risks of working as a full-time artist, Heather stepped into the world of graphic design. It was here Heather was able to develop her skills, explore different styles and develop her own narrative.

Having honed her skills and style, Heather took the step towards being a full-time artist exhibiting work inspired by animals and botanicals. Relocating to New Zealand, family mementos made their way into her work, blending nature and still life.

As Heather Denison’s work continues to evolve her paintings sit somewhere between realism, still life, and the surreal. Teacups and antique furniture interact with birds and deer. Fine brush strokes give pelts and feathers a palatable finish. Detailed wallpaper creates backdrops and reveals a love of fine detail. And throughout them all, a pearl brings wisdom to the viewer and the subjects.

It’s a difficult thing to decide whether you reveal your own story behind the paintings or let people interpret them.

Was becoming a full time artist a childhood dream or a passion discovered later in life?

I think I must have been about 8 or 9 when I decided I wanted to be an artist. I loved anything creative and found my mind wandering when we had to sit through hours of maths and science at school; my notebooks were always filled with sketches. I would spend as much time as I could drawing anything that interested me. When I was 12, my parents gave me a book on painting and drawing. That really inspired me to pursue my dream.

Following high school, I was fortunate to be offered a job in commercial art. Accepting this, I studied through correspondence at the same time. I think this is where my precise, realistic style started to develop. I continued to work in commercial art; painting in my spare time and learning all I could from artistic friends and books I collected. When I had my daughter, I made the decision to become a full-time artist and approached some galleries for representation.

Where do you gain your inspiration from and how to you translate this to canvas?

In my early years, I mostly painted animals and botanical subjects in a realist style. I’ve always been drawn to nature, spending time in the national parks and reserves in Zimbabwe, observing the wild animals.

We have always been surrounded by a menagerie of pets who have given me inspiration over the years. When we moved to New Zealand in 2003, I brought with me some pieces of china I had inherited from my mother. I was feeling a bit homesick and decided to paint some of these cups and teapots. I found the process quite therapeutic but missed the “life” in my painting. So gradually the birds and animals from my new environment started to appear in my work as well. It was a turning point for me as it gave me a personal story to tell which, hopefully, a viewer can also respond to.

I get a lot of inspiration from my lifestyle block and the creatures that I see daily. When an idea comes to mind, I sketch it and make notes. Sometimes that initial thought becomes a painting immediately or sometimes it takes a few years before I get around to creating a painting of it.

You mentioned that some thoughts become paintings immediately while others take time. What headspace do you have to be in start creating? Are there any routines you find yourself following?

I think I live in a bit of a dream world as I constantly see things around me that I want to paint, so I’m really never without ideas. The dilemma is what to paint first as each painting takes many hours and I just can’t produce too many in a year.

I go into my studio most weekdays after I’ve tidied the house and played with the dogs and start working. Once the music is on and I get started, the hours slip away. I feel really blessed to have the opportunity to do something that I love.

It symbolizes wisdom, particularly in the choices we make and is a nice way to remember my mother…

How do you spend your time outside of creating?

I enjoy gardening; with my dogs for company and surrounded by nature, it’s a good balance for the hours spent in the studio. Also, walking in our nature reserves and on the beautiful beaches here in Hawke’s Bay is a great way to recharge and after living in a landlocked country,  being close to the sea is something I really appreciate.

It’s a difficult thing to decide whether you reveal your own story behind the paintings or let people interpret them.

I suppose there is a strong leaning towards explaining everything; particularly now with social media. Some people have told me that it brings the work to life for them if they know all the meanings behind the symbols. I do sometimes explain things if I feel it might not be of common knowledge or if it’s some information that I have discovered but I still feel it’s important for the work to speak for itself. With some works, I don’t really know why I use certain objects until it all comes together at the end and a title comes to mind.

I agree it’s important for the viewer to be able to interpret work with their own experiences. However, I’m curious about the pearl which is a reoccurring feature in your work. Are you willing to share the meaning behind the pearl?

The pearl that features in most of my work really came about at around the same time as the still life objects. I had a small collection of pearl earrings and necklaces left to me; they were my mother’s favourite gem. It really symbolizes wisdom, particularly in the choices we make and is a nice way to remember my mother as she was so encouraging and supportive of my art.

Have you had a comment about your work that has stuck with you?

When I first started painting china cups and birds, someone commented that the fragility of the china was symbolic of the fragility of nature. I had never thought of that before and it made me realise that there are deeper meanings that come from within and translate to the viewer.

It’s always interesting to hear how people view my paintings and one of the reasons I prefer not to explain my own thoughts.

Your recent series ‘Allure’ moved towards surrealism with rabbits with barn owl wings and more distinct colours. What inspired this change and is it something you want to pursue further?

My recent series, “Allure”, with brighter colours and more of a fun theme was really an escape from all the seriousness we’ve faced worldwide over the past year. Although they are quite a sweet and innocent group, there is danger lurking for most of them and choices to be made.

I love pop surrealism and the freedom of expression it brings but I also admire the still life paintings of the old masters, so I think my work will probably continue somewhere in between, gravitating more towards one genre or the other, depending on what I want to express.

Do you have a treasured or special work you will never part with?

I painted in watercolour for many years and have kept a few pieces from that time. But, there is one painting that I created after a particularly difficult time that we went through as a family and it will always remain special to me. It’s of a morepork owl and a lantern. The painting evolved after I had heard the beautiful, reassuring call of a morepork one night while I was feeling particularly down about the events that occurred. As I painted, it became a healing process as I realised that there would be light after the darkness.

What advice would you give to your younger Heather Denison self?

A difficult question as there are so many things that I’ve learnt. I think the most important; certainly, something I really struggled with, is not to worry too much about the successes and failures. Sometimes I would get a negative comment on my work and I would spend months without creating anything as I was too afraid of failure. There will always be highs and lows in an art career but the best thing is to just get back to the easel and create some more work. With each painting, there’s something to learn and it’s so good for the soul.

What does the future hold for you? Are there any pieces you are working on at the moment or upcoming exhibitions?

I’ve been working toward a group show and then I have a list of commissions to start on. After that, I look forward to immersing myself in a new series and see where the journey takes me. 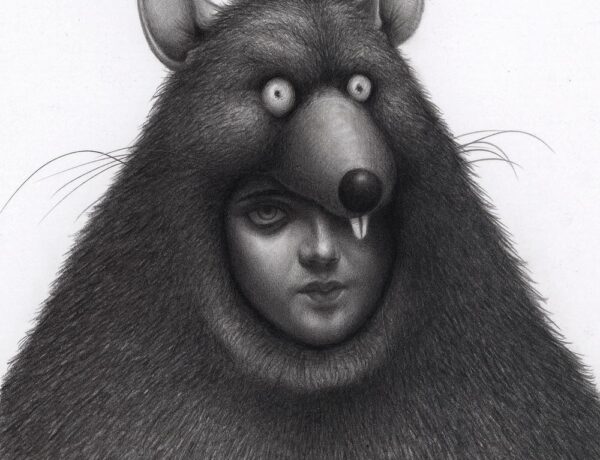 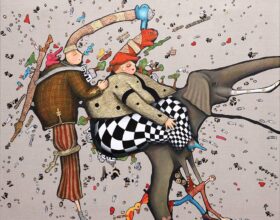 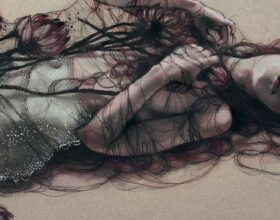