Femininity and masculinity, let’s erase those words for a moment and look closely at the work of Dorielle Caimi. Think, expression. The visual experience depicted in her narrative becomes even more impressive the longer you stare because what rests on the surface isn’t always what it seems.

I had the pleasure of asking Dorielle a few questions about her recent solo exhibition, Fleeting Epochs, at Modern Eden Gallery… and as I studied her work, I found significance in not only the emblematic gestures and figurative representation but in how they spoke to me as a woman – through the dimensions of gender and bias- in today’s stigma-driven society. Each painting transfixed a greater curiosity and challenged me to know more.  Thank you, Dorielle… 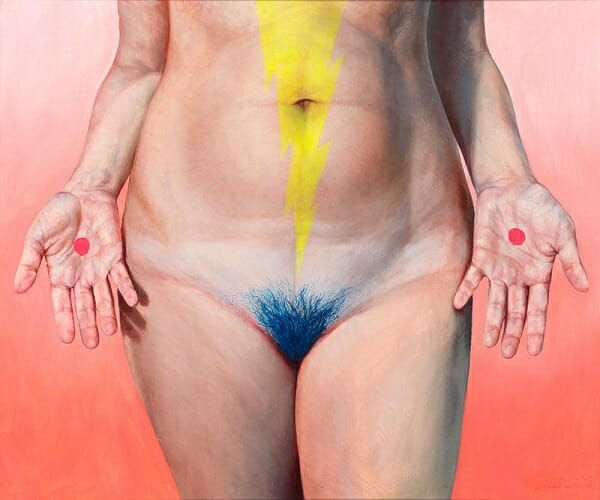 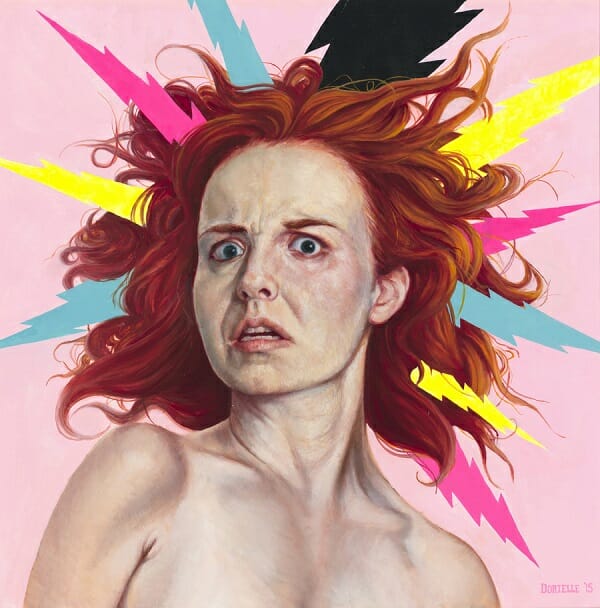 This was your debut solo exhibition at Modern Eden. What do you take with you from this experience?

Gratitude. Kim and Bradley have been so wonderful to work with. They made this exhibition one of the most meaningful experiences in my life.

What was your mental process vs. creative process when preparing for “Fleeting Epochs”?

My mental process was all about pacing myself and keeping focused and organized. I also know about the “show hole” after an invigorating exhibition. The drop in momentum after the initial push towards a show can be daunting, so I made sure that I kept focused on the long term and made my studio ready to jump back into work when I got back. Basically, the mental process is: work; get this many hours of painting in per day, etc. The creative process is: let go. If, by way of the work, I am able to get into a flow state, then the creative process of my career is a success. I did have many late nights working on the paintings for this exhibition where I fell off the face of the planet and into my own wonderful world of creativity. It doesn’t get better than that. 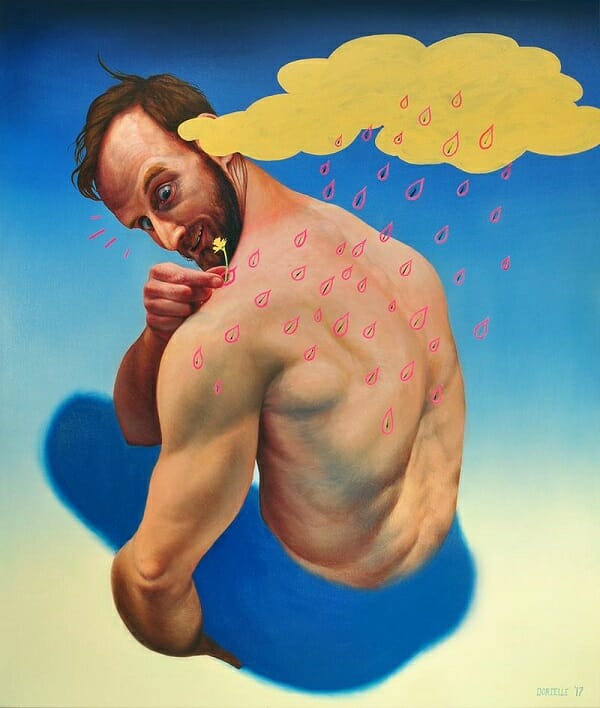 You utilize various elements that seem emblematic to your artistic expression to each individual painting… such as donuts, displaced nipples, and red dots. “BABE IN THE WOODS” certainly lends to the way social media makes me feel sometimes. What did you have in mind when placing these elements into your work? And what do they represent to you?

Most of the time, I just get ideas that don’t mean anything that I can put into words; the ideas and images just come into my head with a strong feeling. The feeling is usually an excited one. It says to me, “Don’t ask questions; don’t analyze me; just paint me. I’ll tell you what I’m all about later.” And usually my paintings do tell me what they were trying to say during their development. In the case of “Babe In The Woods” I had been going through a lot of weird trauma, heartbreak and depression. I felt lost and my world was spinning. I had the idea of a woman who was walking through a forest of symbols that attempted (much like we do to women in real life) to simplify her: the emojis, the ladies’ bathroom symbol, childish scribbles, flowers to describe her as quintessential feminine, etc. All along, however, she is guided by something far more complex and omniscient, and that is depicted in her one eye that is blue. I, myself, had to trust that I would get through the troubled times, and that was what this painting was telling me. “Keep going, human. Keep going; you’re nearly out of the woods.” 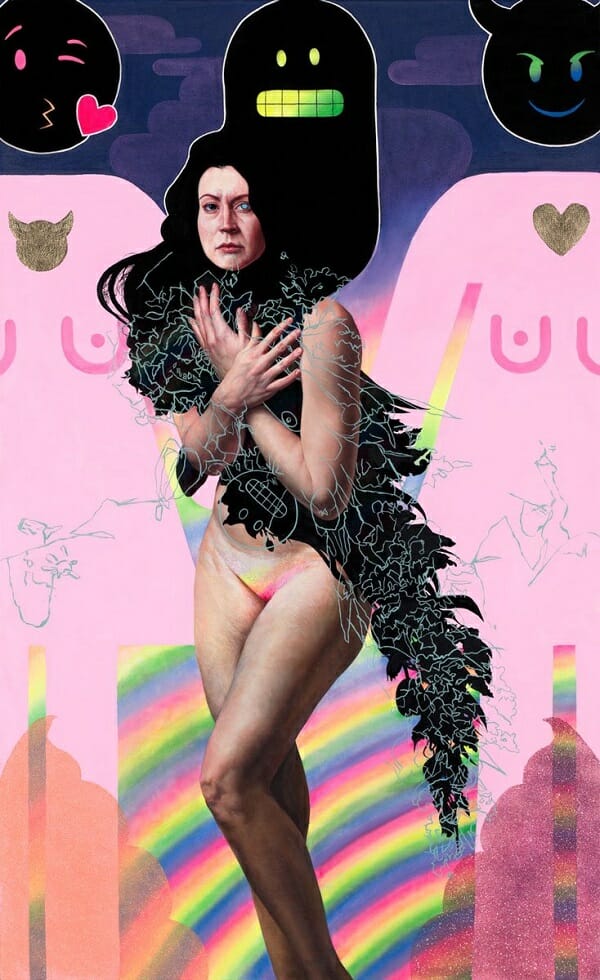 Quite honestly, your depiction of the female figure is delightfully “real” and cultivates a sense of confidence. I feel like I can be myself around your paintings, if that makes sense. How do you feel about the stigmatization surrounding women’s bodies in today’s society?

Thank you. I hate the stigmatization of our bodies. Women, especially, have every inch of their flesh criticized and marketed to, and consequently this somehow correlates our lovability to the “perfectedness” of our flesh. We start as little awake human children, whose mothers and mothers’ cultures tell us that we must be feminine and here’s how: tiny waist, round boobs, tanned skin that used to be fair skin, in-fashion clothes, long graceful fingers, slender wrists (and ankles), handbags, don’t eat too much, one chin, never two, hair removal, cleavage, no cellulite, perky small nipples, cute button nose, long flowing hair, clear skin, make up, stand up straight, full lips, white teeth, straight teeth, no fat under your arm, rolls on belly: NO!, tight, short, or revealing clothing is sexy, the longer the legs, the better, inside of thighs must not touch, pierced ears, small feet, long neck, clavicles sticking out and, if possible, upper ribs along chest protrude for graceful affect, big eyes, flirty, high cheekbones, etc. And these are just things I picked up on before I was even a teenager. None of these attributes fully contribute to a woman’s happiness. This is because no situation exempts a person from the full range of human emotions. In fact many women claim that the pressures to look a certain way lend themselves to low self esteem. Also, this culture that tells women to look a certain way really fucks with our heads when rape culture comes along and says things like, “She was asking for it.” No. She wasn’t; she was trying to be what she has been taught to be since she was born. What happens is that this creates a crushing avalanche of distraction for women. I saw my friends who were funny and smart fall back into a vanity that killed their greater human traits. They started to lean out because there was just too much to take care of in order to be an accepted young female. I mean, imagine for a minute that you’re talking to an alien about the all of this. The alien probably would say, “Wait, if the male humans’ sex drive is strong enough that he would lick a female human’s unwashed waste area, then why are the female humans using so much of their non-sleeping time to work on their physical attractiveness?” Good point, alien. I have no idea.

Judging women’s bodies should be wildly taboo. We make the humans with our bodies. Our bodies take a beating in this lifetime. We do not exist solely for pleasure. We are not here for very long, and enjoying our bodies and minds and hearts and guts before the worms do is our transcendent right. I am so glad that you feel you can be yourself around my work. That is probably the greatest compliment I’ve ever received. 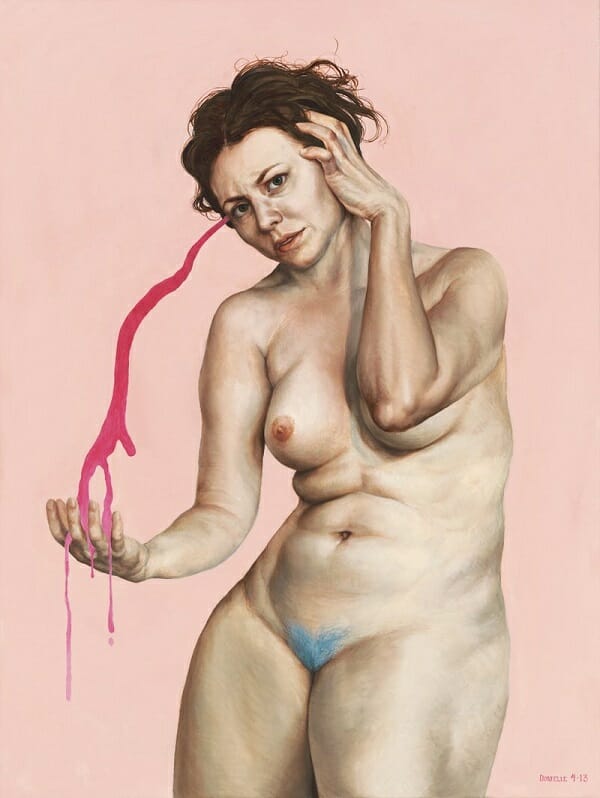 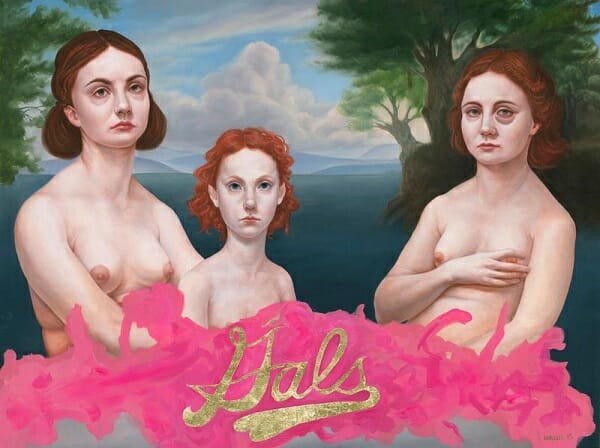 I read in your artist’s statement, “In my future work, I plan to transcend gender altogether”. Will you expand on that notion and allow our readers a better understanding as to what they can look forward to seeing?

In the future, I see my work keeping with figurative representation to a degree, but I want to play with gender roles and norms to challenge the status quo. I want people to see my work and empathize with the universal feelings that all people are given. These feelings, emotions and sentiments include but are not limited to things like jealousy, regret, embarrassment, elation, respect, fear, anger, rage, confusion, relief, safety, power, overwhelm, innocence, determination, illness, anxiety, peace and happiness. None of these sentiments can be genderized. But as I’ve written about previously, the issues between men and women are deeply rooted in preconceived cultural notions of roles and behaviors. Human people have a deep need to simplify and categorize others so that we can keep a point of reference. However, the truth is that no human being is singularly anything. Each person has more potential energy than 30 large hydrogen bombs (this, according to Einstein). Criminals have the capability to change over time and become new people at a cellular level, just like everyone else. So, when you think about it, women couldn’t possibly be as simplified as we’ve been making them out to be. That said, however, I grew up female in this culture and am a “fem-identified” person, so the work I will do will come from my own experience of constantly pushing through the thick stigma surrounding my gender. I will continue to work with that viewpoint because we need to see more art of women through a woman’s eyes. But I do want to fuck with people’s heads in future work to make them question what they think they know.

Staying on this subject, what goals and expectations do you have for 2018?

This year, I am hoping to get into a residency so I can have some time to further push my creative development. I want to create work that scares me, challenges me, and sets me free. I also plan on teaching a workshop in the spring to teach people some things about representational figure painting, but, more importantly, to think critically and conceptually so that their creative efforts lend themselves to a more meaningful existence and context. 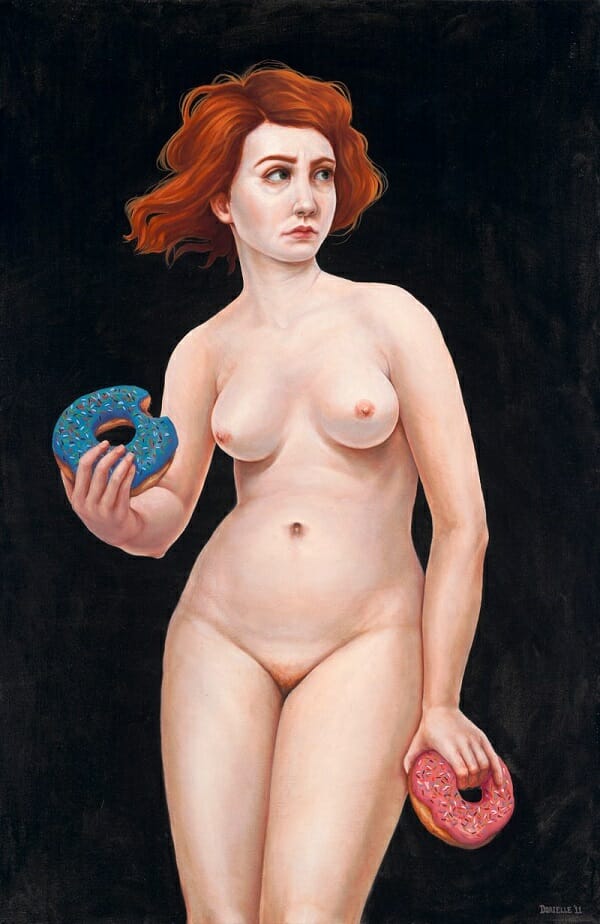 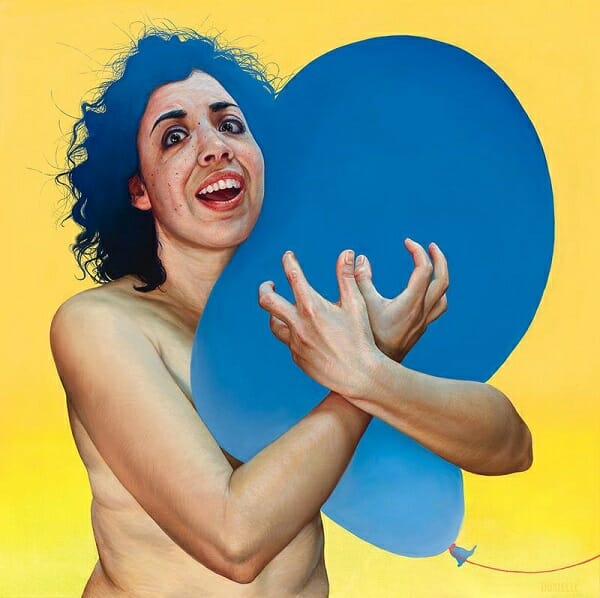 The main thrust of my paintings explores the relationship between the grace and angst that innately occupy our lives. Fusing contemporary painting techniques with classical figurative painting, I am exploring how the dualities of “positive” and “negative” influences and emotions can create ease through acknowledgement. Historically, my work has exclusively illustrated women. However, my newer work incorporates men, or the “masculine” into the exploration of how we impact, perceive, and dance with each that we may understand ourselves in a more empathetic and interdependent context. In my future work, I plan to transcend gender altogether.

Dorielle Caimi was born in Alexandria, VA, USA in 1985, and was raised in New Mexico. She has lived in Seattle, Oakland, South Korea, and Washington D.C. She currently lives and works in Albuquerque. She completed a BFA (Summa Cum Laude) in Painting from Cornish College of the Arts in Seattle, WA in 2010 and a Master Class in Painting at the Art Students League of Denver, CO. with Jenny Morgan in 2013. Caimi’s work has been shown/featured internationally, and in publications such as PoetsArtists  (cover x 2) ,  American Art Collector,   Hi- Fructose, Combustus,  Juxtapoz,  and  Printer’s Devil Review  (cover). In 2015, she was awarded the $10,000 William and Dorothy Yeck Award for work that “visually responds to painting in the 21st century” juried by LACMA’s Franklin Sirmans. Her works have been acquired by Miami University Permanent Art Collection, The Tullman Collection, The Kelsey Lee-Offield Collection, and The Art of Elysium Charity Auction. 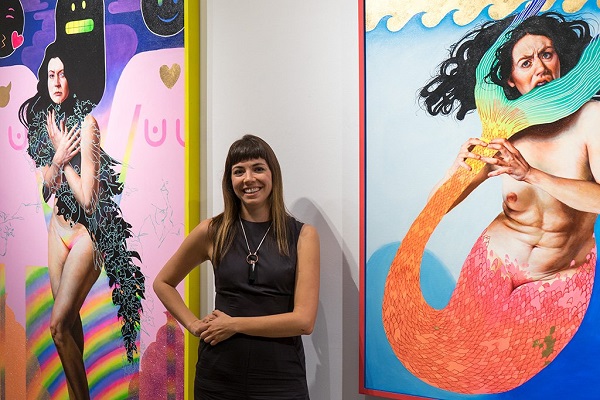 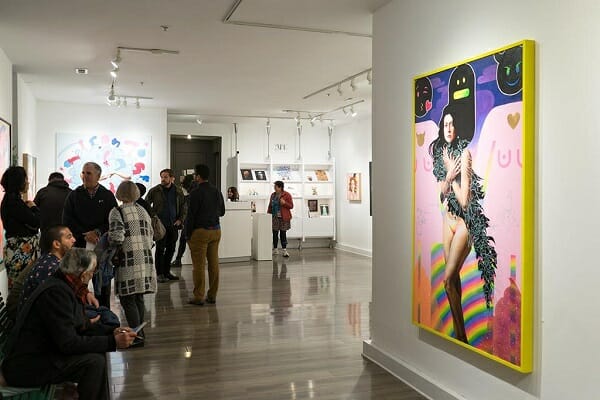 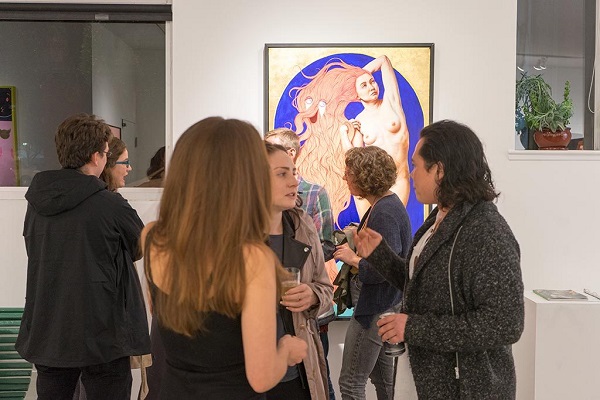