Micah Ofstedahl’s sun-drenched fields, botanically-kissed mountain sides, wind-swept valleys and zen-inducing plains – all of which are featured in his current Arch Enemy Arts solo exhibition, “The Space Between” – seem to scintillate, vibrate and radiate in ways that are typically imperceptible to mere mortals. Upon immersing ourselves within the acrylic painter’s visually transcendent environments, something magical happens – our pulse begins to slow down a little, causing our worldly pressures to fall away. Then and only then are the artist’s glassy, shimmering, time-space continuum ripples finally perceivable to the beholder. It is through his lacy, hallucinatory louvres – which mimic mother nature’s cellular artistry – that Micah Ofstedahl’s mind-bending journey begins.

The American artist’s high-definition, true to life landscapes – with curiously surrealistic distortions that hover in the distance – are a relatively recent hallmark of his creative output. While his fascination with often unseen biological frameworks has always been present in his work, he attributes the deeper visionary/psychedelic flair of his paintings to the fact that he was “ready for a change”. During that fortuitous period in his creative practice – roughly three years ago – a happy little creative diversion presented itself. Micah Ofstedahl was previously accustomed to painting “pretty simple backgrounds”, however – while contemplating how to render some pitcher plants – he “ended up painting the background fairly realistically, and somewhere along the way I decided to paint the pitcher plants as if they were clear, or made out of glass”. And what a brilliantly unexpected yet visually alluring path, indeed.

As for the title of Micah Ofstedahl’s Arch Enemy Arts solo show, it reflects the conceptual heft of his “altered realism” aesthetic and the fact that he “touches on the space between reality and mystery”, which exists “somewhere between the completely unknown, invisible, or imperceptible aspects of existence and the everyday observable reality that we take for granted. It’s those moments that remind you there must be something more than this physical realm, but we can only barely taste it, and just for a brief moment.” Join us in this trippy journey that straddles reality as we know it and the open-minded possibilities of what could be – your great escape awaits.

Micah Ofstedahl, “The Space Between”

About The Artist // As with so many of us, Micah Ofstedahl’s early recollection of how art fit into his life began with a strong gravitational pull and natural enthusiasm for the creative process. His exposure to the mathematically existential works of Dutch graphic artist M.C. Escher in junior high school – and later to Salvador Dali’s surrealistic masterpieces – inspired the Austin, Minnesota-born artist to take as many art-based classes in high school as possible.

His fascination with the visually stunning inner workings of human anatomy – coupled with images of Ernst Haeckel’s meticulously rendered aquatic protozoa – ended up paving the way for his creative exploration of natural marvels, both real and conjured. By the time Micah Ofstedahl reached Minnesota State University, his smooth edged, abstract/cubism-style sculptures and ceramics bore evidence of his fascination with mother nature’s magical truths and surrealistic possibilities.

For well over a decade, the Ashland, Oregon-based artist has further delved into realms that appear as hyperrealistically familiar as they are distinctly alien. His acrylic painting aesthetic – typically regarded as altered realism or bio surrealism – has undergone a unique interdimensional metamorphosis in the past three years that benefits from his great affection for sharp yet flawlessly blended edges and lines. Though the beholder has no earthly idea what exists beyond Micah Ofstedahl’s geometrically ornate, glass-like portholes, stepping through them is an irresistible part of his painterly allure.

About the Gallery // Arch Enemy Arts was founded in 2012 and quickly became Philly’s freshest new venue dedicated to exhibiting emerging and established artists, both local and international. Located in Philadelphia’s Old City District, the gallery has consistently featured lowbrow, pop-surrealism, urban, and macabre art in a wide range of mediums. Arch Enemy Arts was chosen as the best exhibiting space in Philadelphia Magazine’s “Best of Philly”™ 40th Anniversary issue, as well as the “Best Art Gallery in Philadelphia” on Philly HotList in 2012 and 2013. 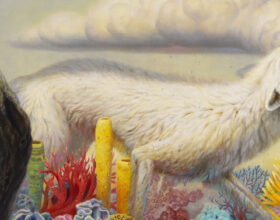 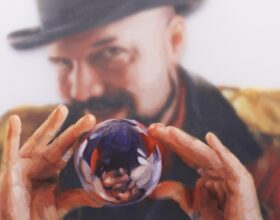 Quick Q & A: How does contemporary always "Plugged in" culture influence your work?