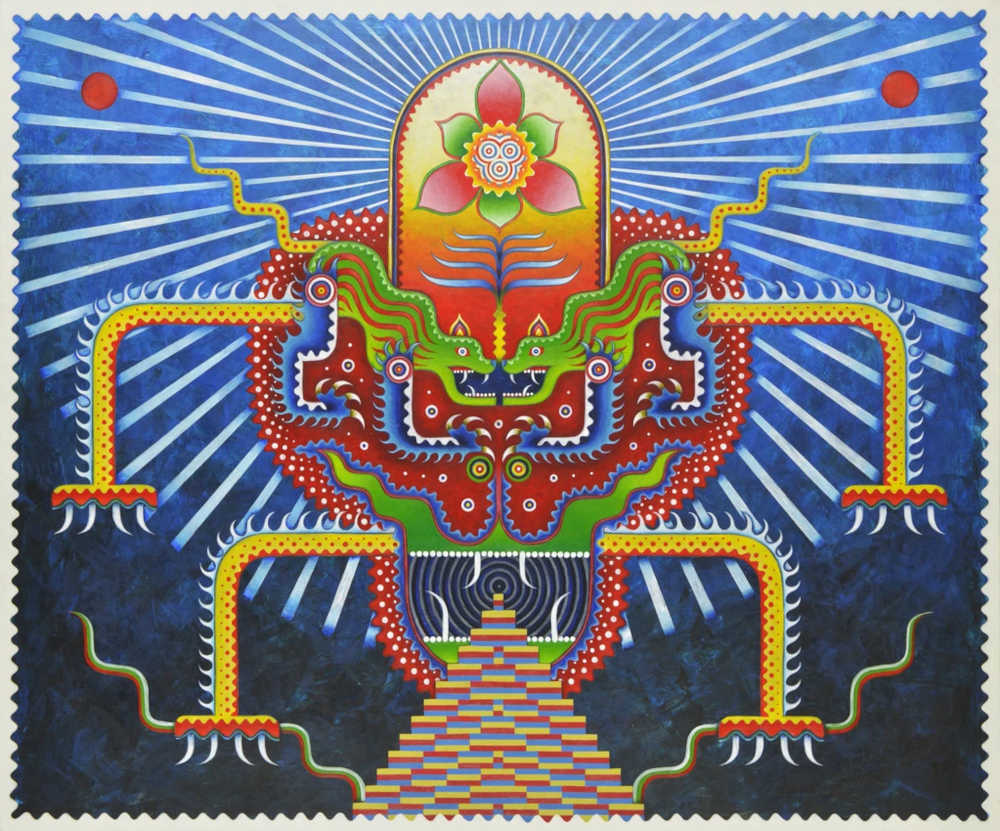 If you’re looking for something to pull you away from the everyday mundane, it’s time for you to step into the world created by Yu Maeda. Encompassing multicultural surrealism, Yu Maeda’s bright creations are a celebration of intuition. The Japanese artist celebrates his cultural heritage along with the principles of Buddhism, Shintoism and Animism, mixed with elements of contemporary lowbrow art, psychedelia and folk art that he discovered upon moving to America. It’s hard not to be sucked in by his stealthily complicated paintings, filled with mesmerising details. The more you look, you more you will discover… so what better place to spend your time than in the realms of such a universe?

Have we piqued your interest? If so, you’ll be interested to know that Yu Maeda is currently exhibiting! His second solo show at Superchief Gallery NY, entitled ‘Something Ambiguous’, “speaks to the artist’s desire to create through intuitive means, leaving behind something cryptic, indeterminate, and unidentifiable.”

The show may almost be over, but you can still pop into Superchief Gallery New York before it ends this Saturday. Additionally, Yu Maeda’s pieces will still be available through the gallery after the event.

It has been a gruelling six months for Yu, who created the entire collection within the past half a year. “I wanted to symbolize animals, plants, and other living things, and reconstruct them to design something [new], another living thing that doesn’t actually exist.” Yu explains. “If there is a theme, it might be the expansion of my (or even the viewer’s) consciousness.”

Yu tells me that he has always enjoyed creating logos and graphic designs. No doubt, this is one of the reasons that he successfully graduated from Kyoto Seika University Department of Design. However, you may be surprised to learn that Yu realised early on this wasn’t the true path for him: “I studied design at university, but realized while I was still in school that I could never be a designer, so I taught myself to create hand-drawn animations. I learned to do things on my own without listening to the people around me, and I think that helped me to build my path as an artist.”

I make paintings with the idea of creating a figure rather than drawing a picture.

Undeniably, there is a lot more to creating his artworks than just piling up countless simple shapes and doodles. Yu skillfully brings a beautiful complexity to the process, and it is clear to see the final creatures birthed from his imagination. His artwork is a mesmerizing blend of, ultimately, every creative and cultural influence he has been in contact with over the years. The effect has easily become the memorable Yu Maeda signature style that we all recognize today.

But the real trick to this? “I make paintings with the idea of creating a figure rather than drawing a picture.” He shares. “I have been repeating the process of simplifying shapes and redesigning them into forms that I find interesting since 2014.” Yu always starts a new design with a freehand sketch, which allows his subconscious to take a role in the organic process of evolving the design. He admits to having an interest in a whole range of influences, including living things, the relationship between nature and geometry, and even psychedelics. “I think my past strange experiences have also influenced my work!” he muses, but we are left hanging to learn more on what these are!

The whole process of creating for Yu is a meditative experience: “I think that painting is a good opportunity for me to face myself.” More recently, this ever-evolving artist has also created 3D versions of his bold designs – including some new artworks in his current solo show, ‘Something Ambiguous’. These rather adorable small collectables have become a favourite for Yu, who feels that 3D works are often more attractive as objects than 2D paintings. With that in mind, Yu shares that he hopes to create more works which are a good combination of both 2D and 3D works in the future.

For now, however, ‘Something Ambiguous’ is the pinnacle of Yu Maeda’s current creativity. The show is an absolute delight. Fresh and fun, this exhibition at Superchief Gallery NY is a true wonder. 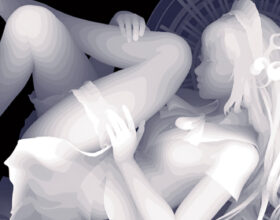 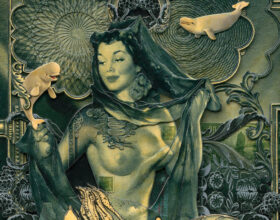 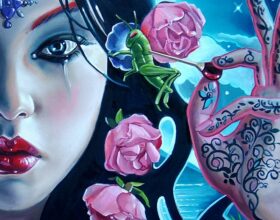 Exploring Kaitlyn Stubbs' 'So Far in a Few Blocks' Exhibition