If you love dark art, then you’ve come to the right place. Delve deep into the strange and unusual and feast your eyes upon new works from Rick “DIENZO” Blanco, Richard J. Frost, and Bob Doucette in this triple-treat exhibition, Prone to Exaggeration. Join The Dark Art Emporium as they welcome the debut of these talented artists on Saturday, May 11th!
Cast in heady imagination while balancing the scales of real and surreal, the unique styles and perspectives of each artist meld seamlessly into a mysteriously-dark dreamscape where anything feels possible.

As gallerists, we find ourselves in a near constant state of infatuation. Falling in love with the works of artists and occasionally enamored with the idea of bringing them together. In an attempt to create that “Peanut butter in my Chocolate” moment, where these works blend together into a show that not only compliments but contrasts in a way that brings out the best of each series. Such is the case with “Prone to Exaggeration”. All three of these artists are well known, respected and accomplished. Each has a very distinct style, and while thematically not dissimilar, (they do all enjoy the portrait) they stand apart as much as they flow together. Often caricaturesque, the exaggerated features and disparate expressions lead us by a firmly gripped hand into allegorical worlds, where beauty wears many masks. Wether Dangerous, melancholy or humorous, each piece feels like it has been waiting for us to find it, to dive deeply into those big wet eyes and to find the secrets they are hiding just behind the varnish. 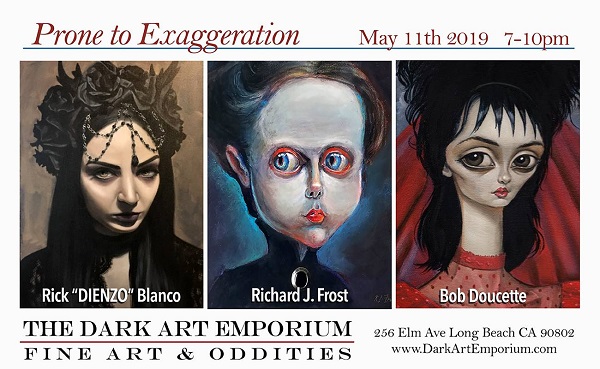 Saturday, May 11, 2019 | 7-10pm | Artists will attend
After party immediately following the reception at The 4th Horseman

Rick “DIENZO” Blanco is a Los Angeles area artist whose collection of dark little characters are meant to intrigue, entice and perhaps cause a bit of anxiety. While his experience in commercial art as an award-winning designer spans over 20 years, his love of fine art has existed since he was old enough to hold a pencil. His style is greatly influenced by his work for Disney, Mattel and Cartoon Network. In his current role, he serves as Creative Director at Xbox. Dienzo received his bachelor’s degree in graphic design and an Executive MBA from Loyola Marymount University. 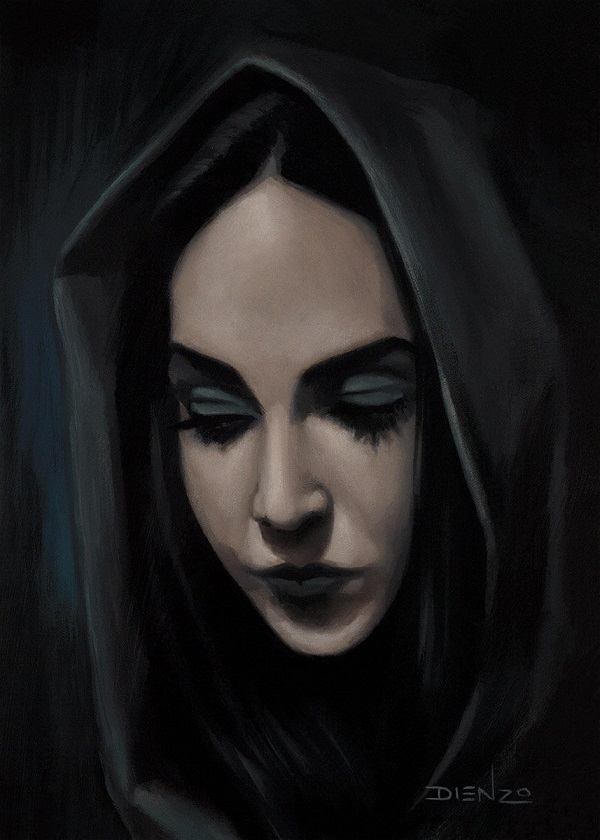 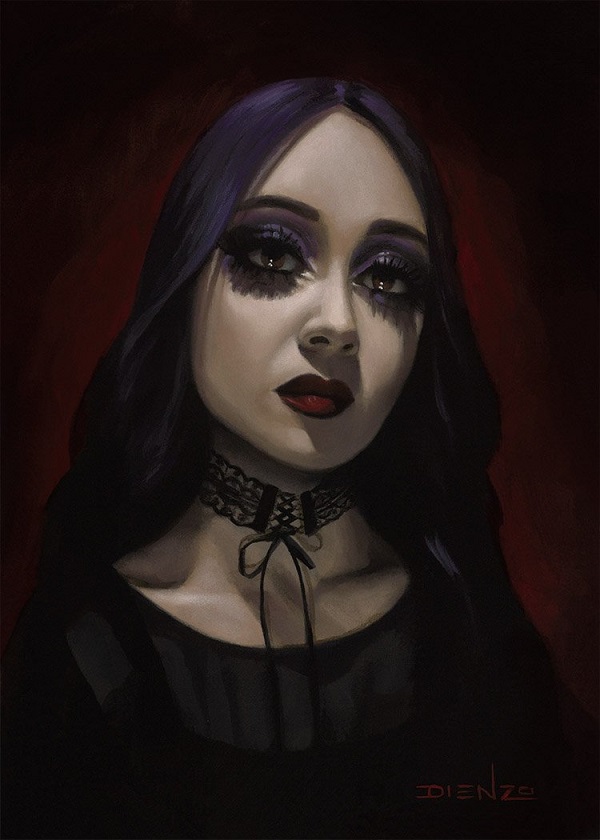 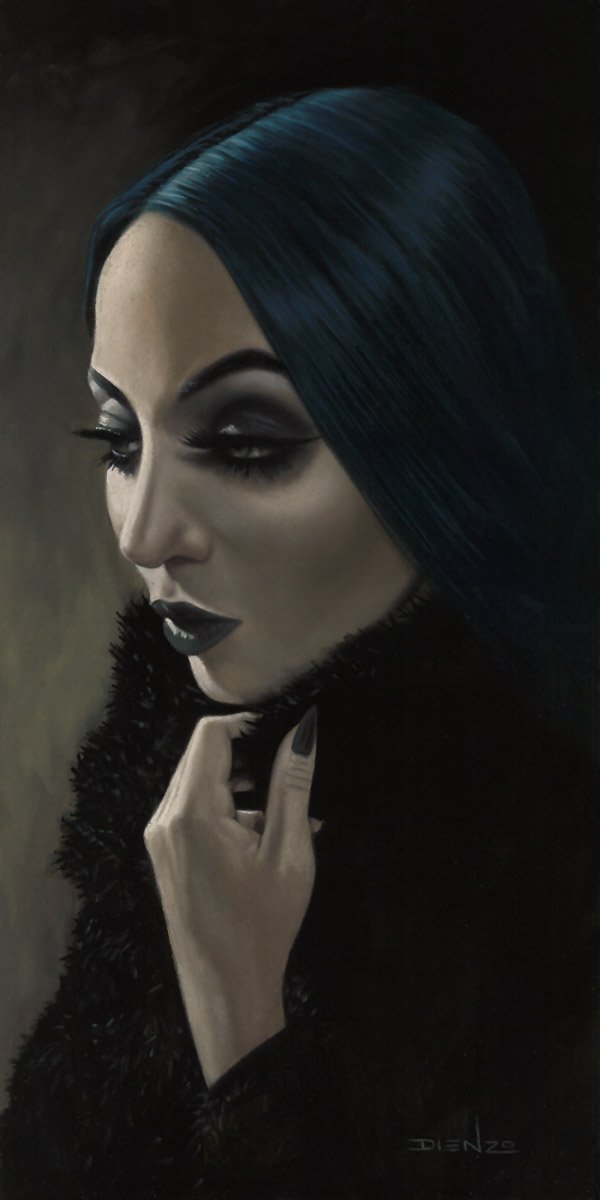 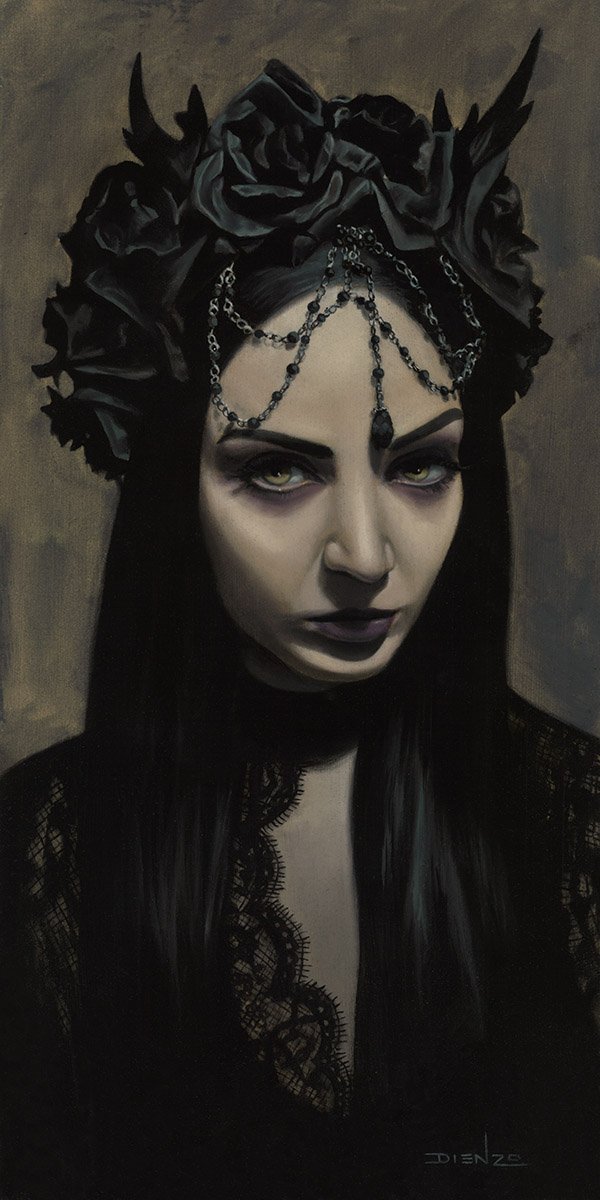 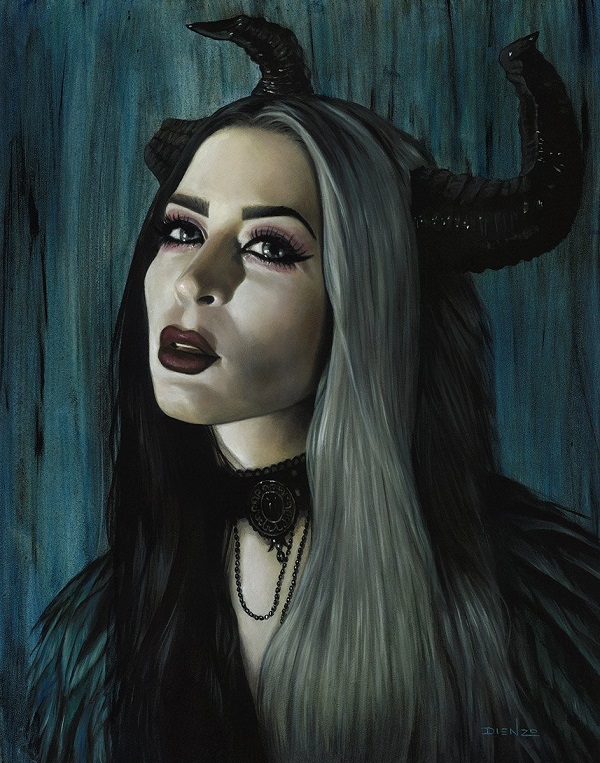 Bob Doucette’s whimsical and highly saturated paintings come from the world of dreams. Sometimes bordering on surreal, his imagery is a product of a decade of theater work, puppetry and twenty-five years in the world of animation. As an animation director he was responsible for many well known animated children’s programs for PBS including, Chloe’s Closet, Dive Olly Dive and Clifford’s Puppy Days. He started in animation at Warner Bros. and was involved with many classics like Tiny Toon Adventures and Animaniacs. His independently animated films won him many prestigious awards and honors and his MFA thesis film Pink Triangle, the first animated film to depict the persecution of homosexuals by the Nazis, is in the permanent collection at the New York Public Library. 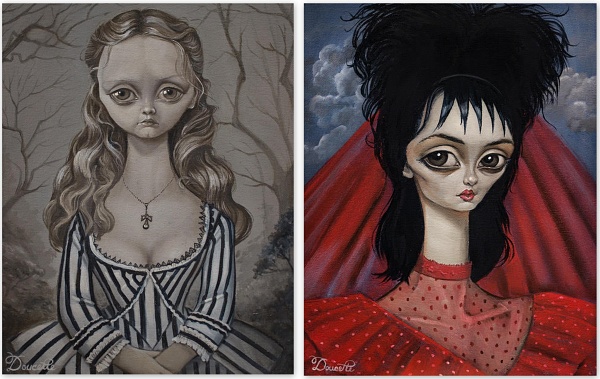 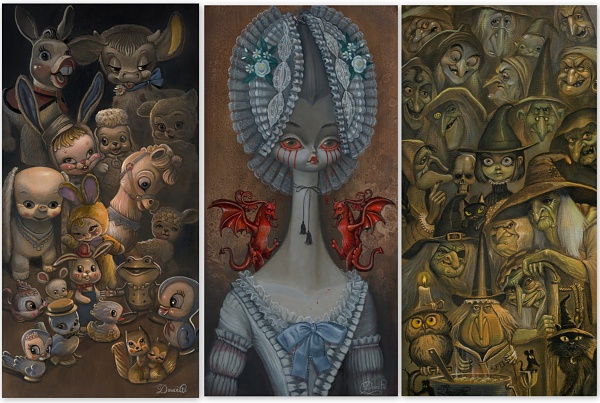 Richard J. Frost’s self-described style is “tweaked realism” or as he heard a critic say “Norman Rockwell meets the Twilight Zone”, which is fairly deft description of how Frost re-imagines his subjects. Frost is fascinated by faces which tell a story and lists a dysfunctional family as well as hitch-hiking as a part of his educational experience and influence. A graduate of Otis Parsons Art Institute, Frost lives and works in Los Angeles. 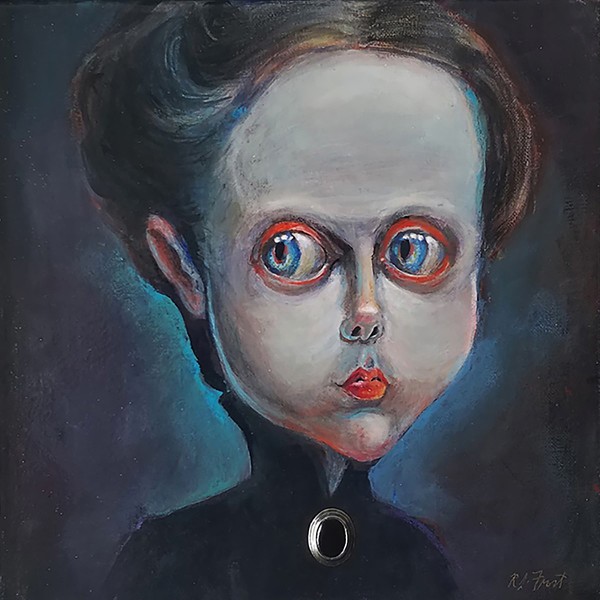 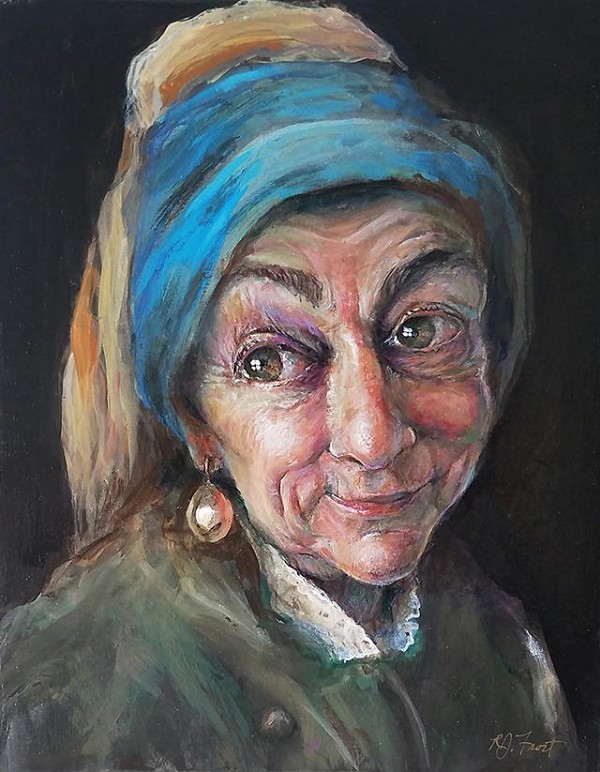 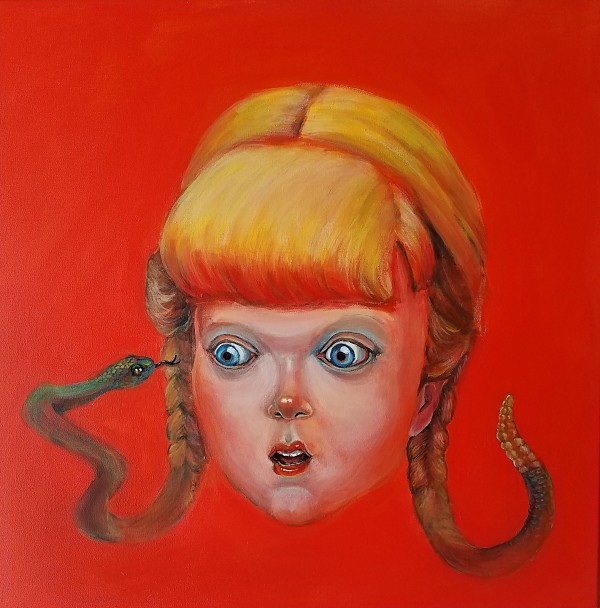 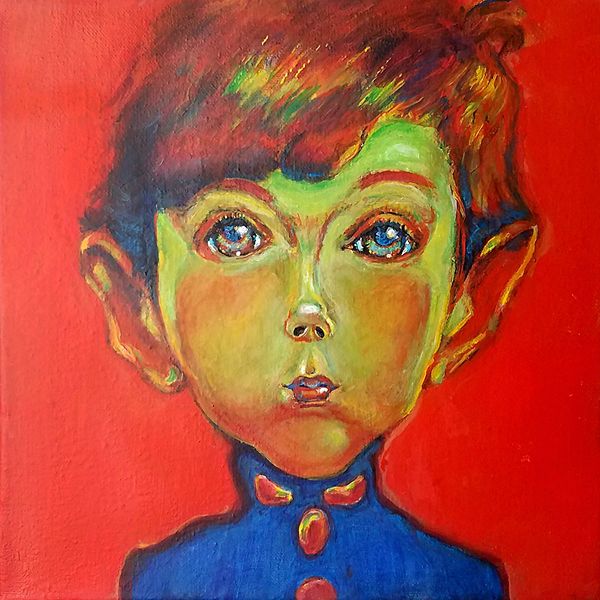 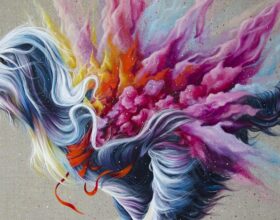 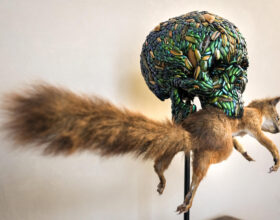 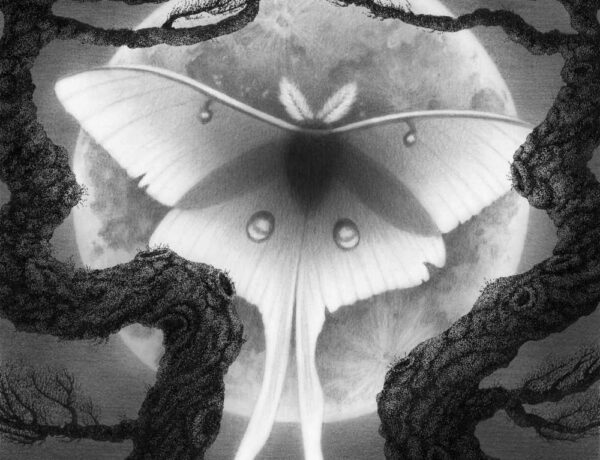