Every month we choose one of our favourite creatives to TAKE OVER the Beautiful Bizarre Magazine social media for the day. For June, we chose sculptor Juz Kitson to share with us the artists who have inspired her through her artistic career. Just in case you missed it, below we present the full TAKE OVER.

Juz Kitson // Juz Kitson divides her studio practice between Jingdezhen, the Porcelain City in China and the south coast of New South Wales, Australia. Her sculptures reveal a fascination with feminine and masculine ambiguous forms and the sensuality of materials. They invariably reference human and animal parts in uncanny and fluid combinations. Informed by traditional Chinese techniques of moulding, casting and glaze firing, her graceful and elegant palette, soft hues and high gloss porcelain creates a friction posed by fleshy bodily subject matter with a strong sense of materialism, cascading off a wall or suspended from a ceiling. The work’s tension lies in resisting traditional conventions, both central to ceramic traditions and pushing the boundaries of a material steeped in history.⁣

Matthew Barney // Cremaster Cycle – The Cremaster Cycle five feature length films literally blew my mind into a thousand million pieces when I first saw it. My words can not give it justice. I first saw it during art school and it gave me this heightened sense that ‘anything is possible!’ These images are stills taken from the films – the Cheetah was played by Aimee Mullins who was born without shinbones, the result of a condition called fibular hemimelia. At the age of one, she had both of her legs amputated at the knee. With aid of prosthetic legs she not only learned to walk, she learned to run… and fast… she was the first athlete to wear the “Cheetah” carbon-fibre sprinting legs and collaborated with Barney to make the Cheetah legs in Cremaster Cycle.

David Altmejd // “L’oeil”, 2017 – David Altmejd is one of my all time favourite contemporary sculptors. It’s his vast array of materials and sensory explorations I find so satisfying along with most of his influences being a heady mix of post-apocalyptic vision, science and magic, science fiction and gothic romanticism. Most of his work provides a basis for rethinking a vast array of topics, such as art and energy, the ongoing dynamics of becoming, the divide between human and animals and the artist as facilitator instead of sole generator of an idea.

Polly Morgan // Polly Morgan is a British artist working in the form of contemporary taxidermy, I’ve been an admirer of Polly’s work for the last decade and it’s been fascinating to watch her progression and how she has re-contextualised the traditional practice of ‘stuffing animals’. Her newest series of snakes in my opinion are exceptionally good. I also highly recommend checking out her new YouTube Channel filmed directly from the studio. There’s a dark humour in the dialogue as she works with her studio assistant and collaborator in the studio.

Dale Frank // “Sabco Peroxide”, 2016, installation view – I think Dale Frank is one of the finest Contemporary Australian painters and I’ve admired his work since an early age. Actually I think he’s a genius. His paintings are monumental and push the boundaries and blur the lines between painting and sculpture, the titles of the works are poetically ambiguous leaving the viewer in absolute awe. It’s hard to really grasp the fluidity and profound effect these paintings have, they need to be seen in the flesh to absorb their power. I picked Dale not only for his incredible repertoire of work but also because I believe he ‘lives his life as a work of art’, he’s the real deal! The second picture taken from inside his wondrous and eclectic home, the gardens surrounding his home and studio are exquisite – he is currently creating 50 acres of botanical gardens devoted to rare species that he will open to the public on completion for viewing.

Kiki Smith // “Born”, 2002, Bronze – I remember so vividly the first time I came across a Kiki Smith bronze sculpture in Berlin, I was lost and trying to navigate my way through a small ally when I saw it in my peripheral. It stopped me in my tracks. She was certainly a huge motivation and inspiration during my formative years and development as a female artist. She uses a multitude of mediums and materials and her collections are meditations on life and spirituality, often featuring narratives about origins and endings.

Julia deVille // “Mother is my Monarch”, 2018 – To me Julia is the Taxidermy Queen. I adore her work and ethics surrounding her practice and life. I’ve always felt a strong affinity to deVille’s work, namely that we share a fascination in gothic romanticism and giving inanimate objects a spark of life. One of my favourite works would have to be “Mother is my Monarch” – Thirty-five years ago a giraffe died at the Adelaide Zoo. Its body was kept in the freezer of the Queen Victoria Museum, Launceston, until it was acquired by Julia deVille five years ago. In “Mother is my Monarch”, all of the decorative components have been handcrafted by the artist using precious metals and gemstones. The vitrine, commissioned by deVille, was created by artist Kate Rohde.

Belinda De Bruyckere // “Marthe”, 2008 – I’ve always had a strong affinity to Belinda De Bruyckeres wax sculptures, the first time I saw ‘Marthe’ in the flesh it had such a profound effect on my entire body… I stood there… entirely still in the Satchi Gallery London, completely captivated, provoked, disturbed, shocked… and then these emotions were all replaced by an overwhelming sense of calm.

This was the last piece chosen by Juz Kitson for her TAKE OVER. Thank you again Juz, we really appreciate you taking the time to put this day together. 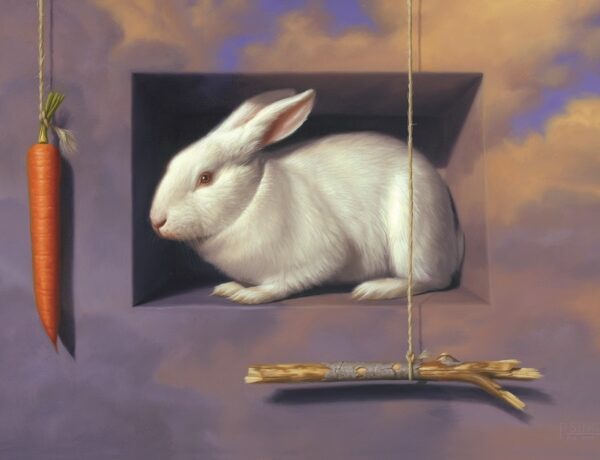 Christian Zucconi: Pretending to be a Stone 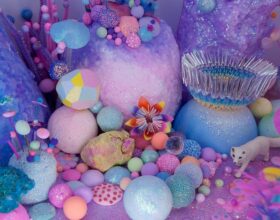 The Sweet Dreams of Pip & Pop