Every month Beautiful Bizarre Magazine chooses one of our favourite artists to TAKE OVER social media for the day. For September, we chose Laura Colors to share with us the artists who have inspired her throughout her artistic career. Just in case you missed it, below we present the full TAKE OVER. 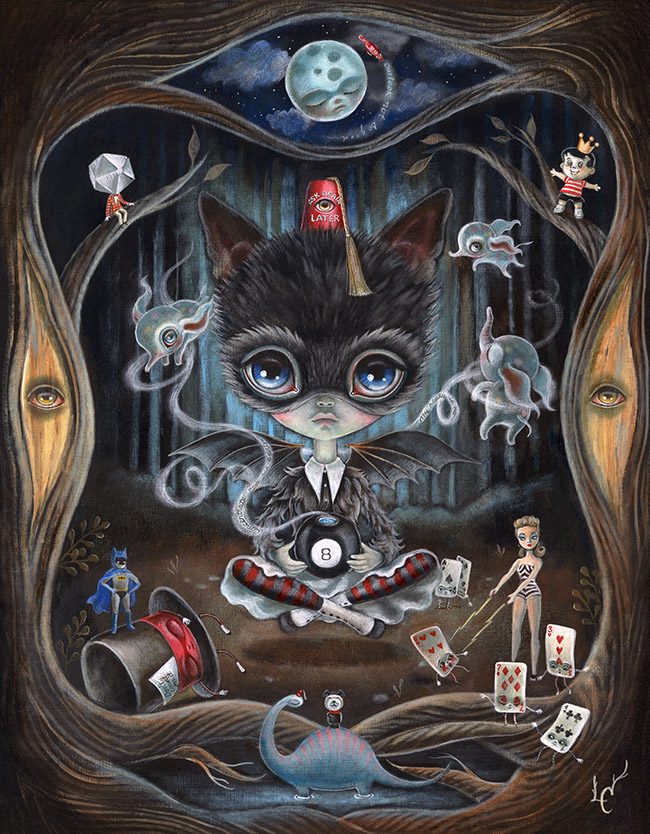 Laura Colors // “Ask Again Later” // I’m so honored that I was asked to do Beautiful Bizarre Magazine’s take over. I said yes without really thinking about how difficult it was going to be. There are so many spectacular artists- how would I get my list down to only seven? I have many, many more favorites than I’m able to show you. I’m always adding to my list and layering my influences. Here’s a little bit about what works for me. I love a feeling of magic, fairytales, storytelling, beautiful rendering, and I also love when you can look at a piece and know who it belongs to. Coming into my own style is something I’m working hard at. The other challenging part about doing this is picking your own favorite piece. It’s kind of like asking someone to pick their favorite child. I don’t have a favorite piece of my own. I like some things and dislike some things about every piece that I do. I ended up picking my piece “Ask again later” because it has a lot of the things that I like to put in a painting in it. It was a piece for “The Joys of Toys” official Mattel exhibition at Galleries 1988 in 2017. It has Batgirl levitating in the middle of a mysterious forest while waiting for her answer from the magic eight ball. My painting is centered on a magic eight ball because when I was a kid I thought it was really magical and my parents wouldn’t let me have one. So when I did see one at a friend’s house it was like seeing some kind of mysterious orb of magic. I was actually afraid of it. I have tiny elephants circling Batgirl’s head, curious to see the answer from the magical orb. I love framing my pieces with trees and hanging a moon in the sky. I hope you like this painting as much as I enjoyed making it. And I hope the pieces that I picked give you a glimpse into what I’m trying to accomplish with my work. 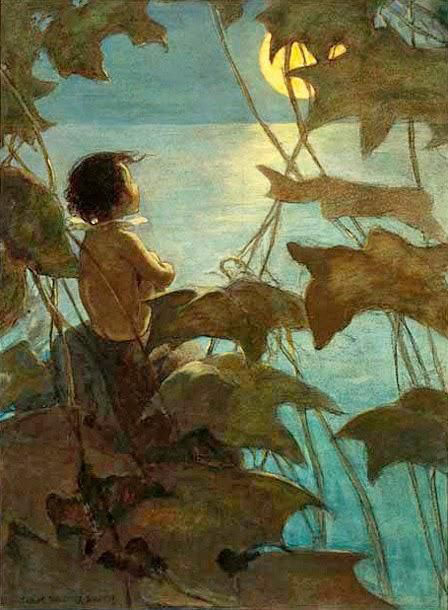 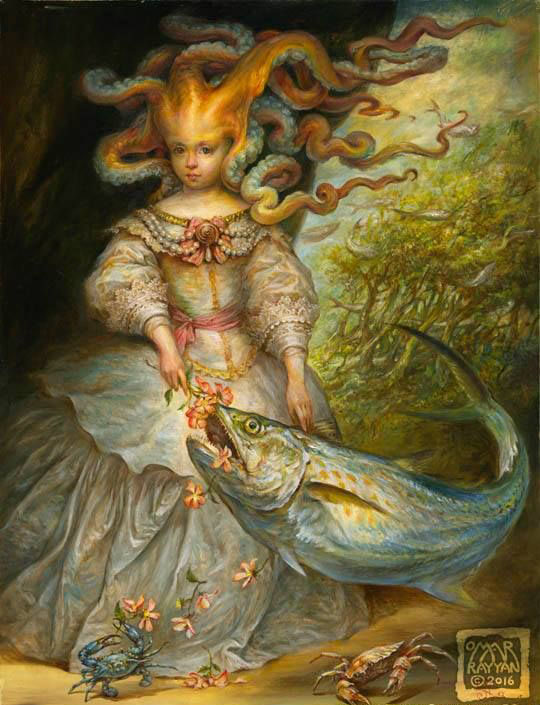 Omar Rayyan // “Spanish Mackerel” // I recently discovered artist Omar Rayyan. I love everything about this piece, “Spanish Mackerel”. I love how the warm and cool colors work together, the subject matter, and how the layout leads your eye around the page. It has a dream-like quality about it and I love the idea of a mackerel swimming through the air of a magical forest. If only I could go there with my sketchbook and observe! Imagine sitting there as magical sea life flows through the enchanted forest. The painting technique is beautiful! It just glows!! 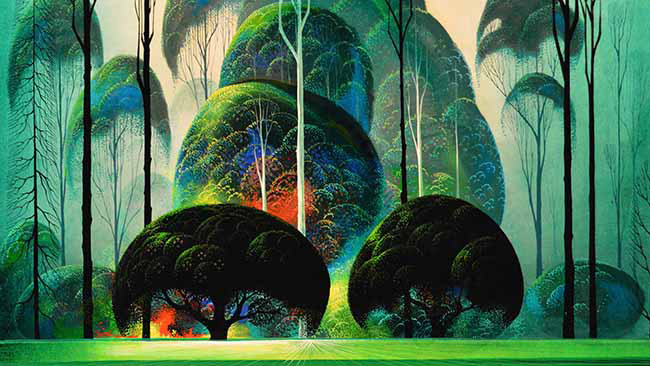 Eyvind Earle // “Green Forest” // I’m sure that most of you will recognize this beautiful background style from Disney’s Sleeping Beauty. This one is called Green Forest and it was painted by Eyvind Earle, one of the Disney greats. He and Mary Blair are a couple of my all time favorites! In 1951 Eyvind Earle went to work for Disney as an assistant background painter. He worked on many animations but I will always love Sleeping Beauty the most! I’ve watched it so many times with my daughters and never tire of looking at it. It’s so beautiful and highly stylized. The trees blow me away. I love the graphic quality of the piece but the gentle nature of it all is so soothing. The color palette is genius. I want to live there! 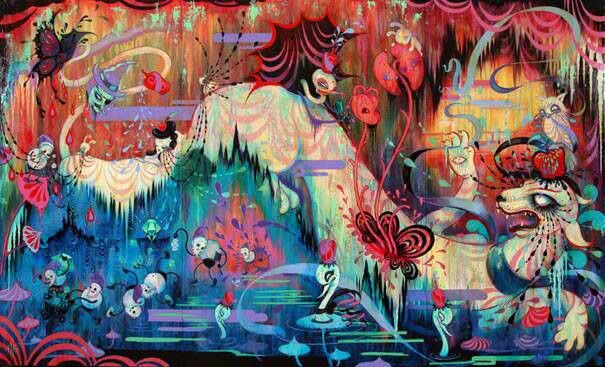 Camille Rose Garcia // “Hunters and Warriors” // I love Camille Rose Garcia! Her work is just off the charts cool! Her colors are so rich, vibrant and the subject matter is like a dream. There is so much to look at. You can literally see the role music plays in her work. The piece I picked is titled “Hunters and Warriors”. I’d love to have a piece like this covering an entire wall in my studio. This piece is epic! So powerful and yet so delicate. 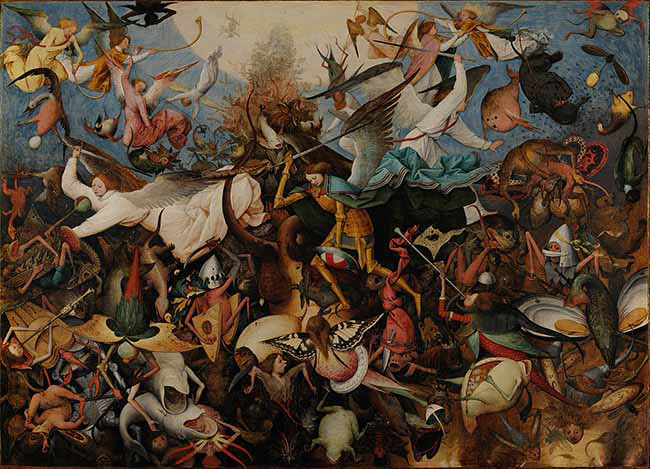 Pieter Bruegel the Elder // “The Fall of the Rebel Angels” // Pieter Bruegel the Elder, a Netherlandish Renaissance artist, painted this in 1562. “The Fall of the Rebel Angels” is an all time favorite of mine. It’s a crazy religious oil painting depicting a great battle between good and evil. If this painting reminds you of a Bosch painting, it should. It’s a nod to Hieronymous Bosch. The composition of this piece has a central figure with many smaller figures surrounding it. I think it’s amazing and could stare at it for hours. There are so many bizarre, surreal details hidden in this piece! 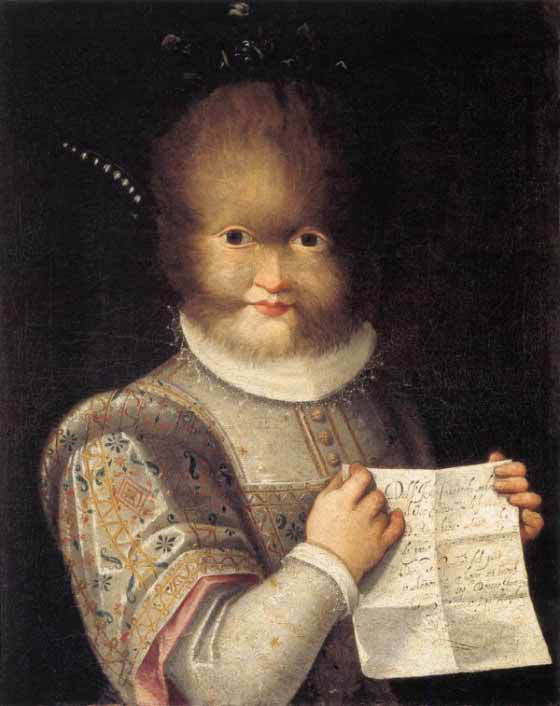 This was the last piece chosen by Laura Colors for her TAKE OVER. Thank you again Laura, we really appreciate you taking the time to put this day together. 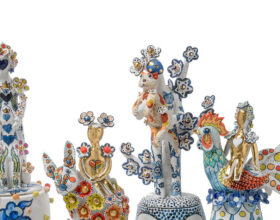 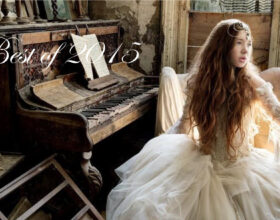