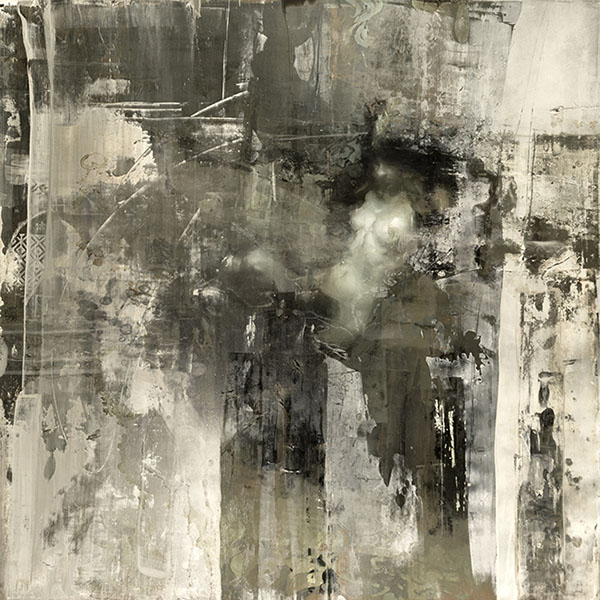 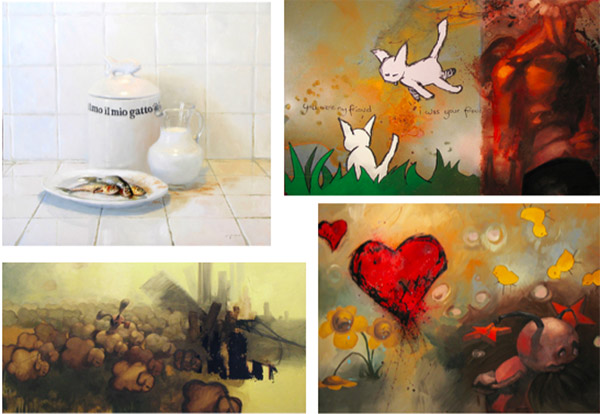 The following posts today will be a short list of the artists who inspire me.  A difficult choice!  There’s literally thousands of images I’m fond of, but when it comes to a true artist of inspiration, I like to guide my life based on a few simple ideals which I believe the artists I’ve chosen exemplify:

– A hard work ethic, usually evident by a limitless amount of studies, sketches, paintings, photographs, whatever it may be, which often leads to:

– A borderless curiosity and creativity in all mediums or forms of art and life, which often shows irrefutable evidence of:

– A self-respecting and truthfully unique style and vision that is not constrained within a particular medium, a lifestyle which allows one to be:

– A soul who understands all facets of life, the beauty and the misery, people’s place in nature and amongst themselves.

These are the artists I would like to have at on my picnic sheet with wine. 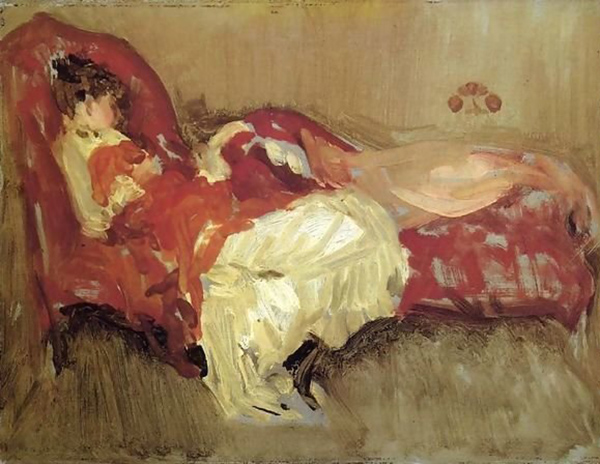 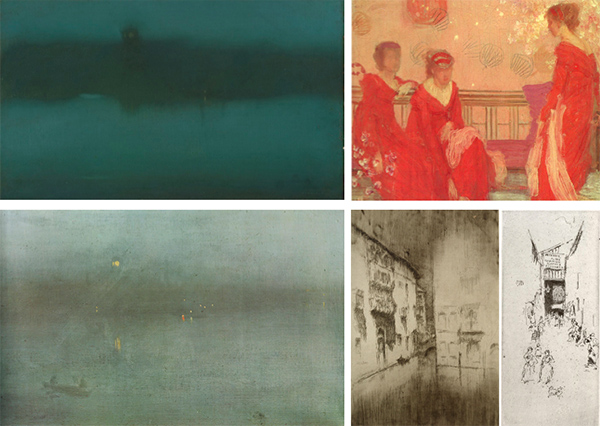 James Abbot McNiell Whistler (1834 – 1903) // A master of muted color harmonies, and the balance between representation and abstraction, Whistler has been a constant source of inspiration with his words as much as his images. Noted as the father of abstraction, he pushed the boundaries in his time of what “painting” really is, and he opened up the world for how many artists paint these days, so much so that he even defended himself against the slander of a critic in an epic court battle, to which he won only a penny. But he stood up for himself, and for painting, where most people would simply slither away. He was famous on the scene of his time, always a character, often in the papers, true to himself, and a revolutionary in artistic thought. His speech “The Ten 0 Clock Lecture” personally presented to a lofty group of London’s elite as simply an entertaining and informative public speech, has deep tones and intelligence, even artistic spirituality, which I feel everyone of any genre should read, and also impressive points which seem lost on the world still to this day. Thousands of etching, paintings, sketches, room design, writings and more are a treasure-trove for any artist willing to explore the life of real artist.
Included here is one of my favorite paintings of all time “Note in Red: The Siesta” which I stumbled into once in real life… a brilliant little 8 x 12 inch note.

(By the way, a note to young artists: if you are inspired by an artist’s paintings, that’s awesome we all are, but to develop your own interpretations will reward you with insight, instead of a mediocre copy.) 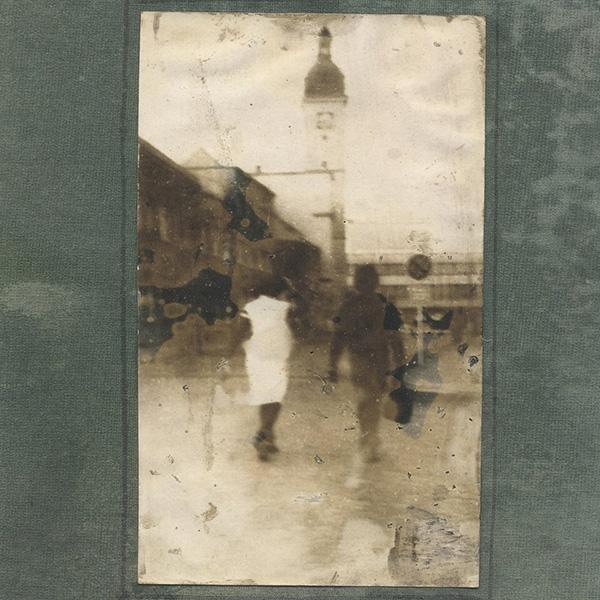 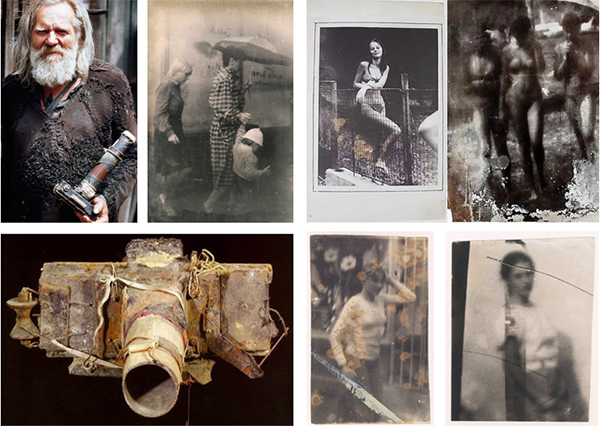 Miroslav Tichy (1926-2011) //I was introduced to this artist while perusing the library of the incredible director and friend, @loic_zimmermann.  Tichy was a Czech artist who experienced the crushing oppression of not only Communism, but of the social pressures of an artist in the world.  A man who spent most of his early life painting, drawing, acting, set designing, photography, and creating large marionettes for theater, after one exhibition in the 50’s he turned inward away from the world for the rest of his life.  Seemingly homeless, he lived in happy squalor, building his own cameras from trash, shooting 100 photos a day, and developing them in his bathtub at night.  He paid no attention to the outside world and its cares and worries, and never attended any of the exhibitions of his photographs in the early 2000’s when his work was brought to light in exalted and controversial exhibitions around the world.  An enlightened being, who’s intelligence and heart can be seen in the short documentary “Tarzan Retired” on YouTube.

To me, his life and art are the paramount example of a perfect blend of intelligence, hard work, being true to oneself and simply a good person.  Visually, the immense emotions of memory which stem from the balance of information and destruction are dear to my soul. 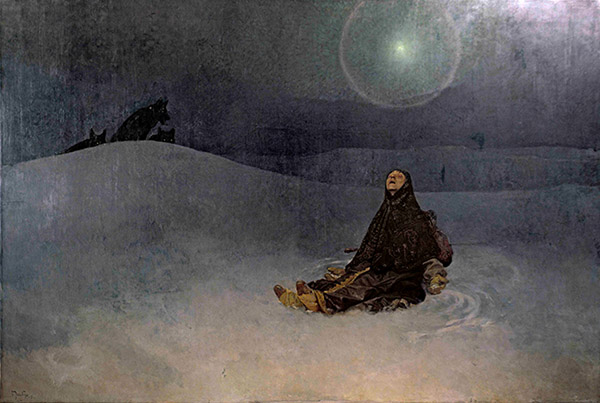 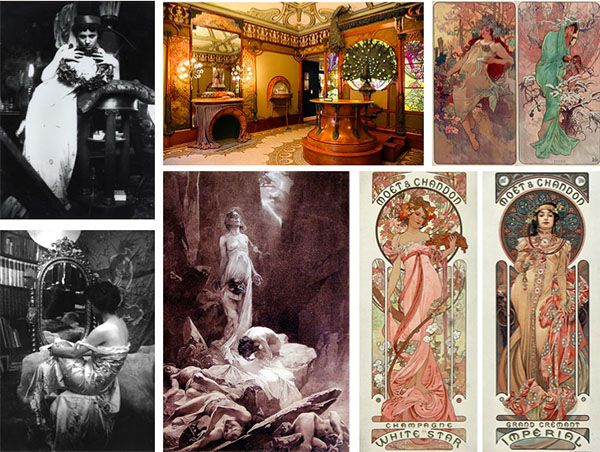 Alfonse Mucha ( 1860 – 1939) // A pinnacle of self-motivated uniqueness, humility, skill and vision presented in an awe inspiring oeuvre of grandeur that has lasted and infused itself with time.  Mucha’s Slav Epic is something that any and all artists must make a pilgrimage to see, it simply cannot be described in words, nor the importance and unselfish desires behind its creation.  Oil paintings, lithographs, books on designs, posters for theater, his materials are boundless.  He designed the interior, exterior and even the furniture of his friend’s jewelry shop and even designed a lot of the jewelry in it as well as the jewelry on his models. The reference photographs themselves are an art piece of note.  By surrounding his life with the aesthetic he loved, he alone evolved an ideal of beauty of such incredible composition, color, flow and design which overtook the world presenting the hope of truly evolving humans’ appreciation and understanding of natural beauty, he believed there was a sacredness to the beauty that underlies art.  If only the world still lived with that same respectful attention to form and composition I think we’d be living in a visual garden of splendor. 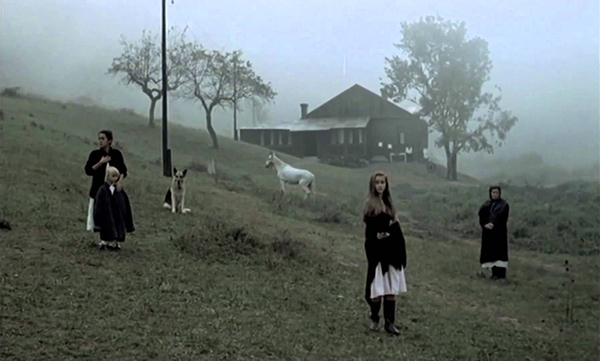 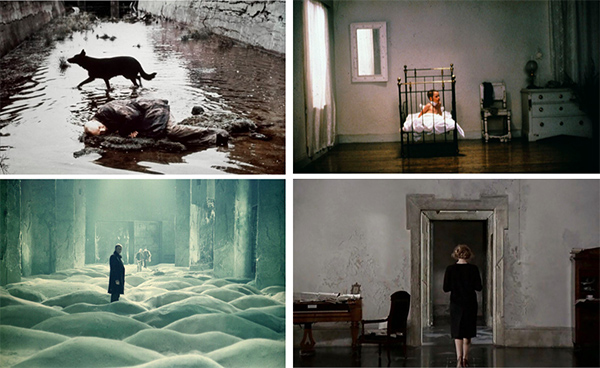 Tarkovsky was an astounding filmmaker, poet, and artist from Russia who created films of the most impossible beauty, melancholy, mystery and amazement, capturing the true feeling of time within life and its effect on the soul.  Every scene composed in singularity, the duration of the entire shot, and the completeness of the films are as beautiful and intelligent as any of the Russian realists, and brought to a new level in time and movement in the still young medium of artistic filmmaking.  His polaroids were honest and lovely and everything he did was true to himself despite the hardships of creating such films when the art form of film was becoming lost on the public already in its infancy.  He’s a terrific reminder of retaining one’s own artistic vision at all costs.  The book upon which Stalker was based was written by the Strugatsky brothers, having bought all of their English translations I could find, only halfway through them, and each one is a mind-blowing sci-fi head trip of existentialism… highly recommend. 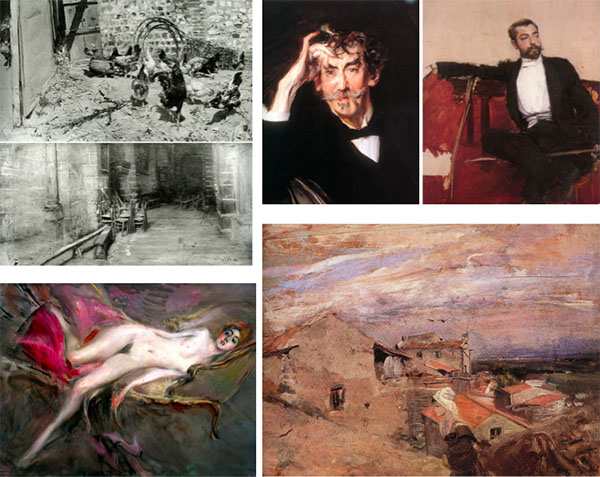 Giovanni Boldini (1842 – 1931) // You can see how he mastered the style of the day in his early years, and together with that knowledge and his unfathomable amount of painting that followed, forged his way into his own unique vision, interpretations and style, breaking free from his necessary, but restrictive formal educations in painting.  To understand color harmony to its fullest, you must know all the colors and their relations, so to become a master of composition, you must know all compositions this world has to offer.  An easy way to do that is to draw and paint everything, all the time… then you’ll get kind of close.  Boldini balances beautiful compositions of shapes and values with a mastery of just the necessary amount of representation and emotional mark-making, from his shortest sketches to his most time consuming paintings.  Although I’m not always the biggest fan of his color choices, that’s just a personal taste, looking beyond that it’s interesting to note the gazillion differences that exist within the relationships between value, composition and color.

A brilliant example of how one must be a master of all facets of their art form whether or not they choose to only show one side of it.  The combination of skillful mastery and uniquely personal and untethered boldness shines brighter through time than any flashy gimmick or restrictive monotony. 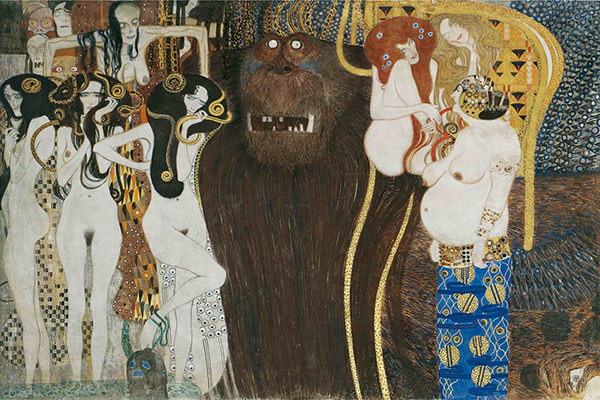 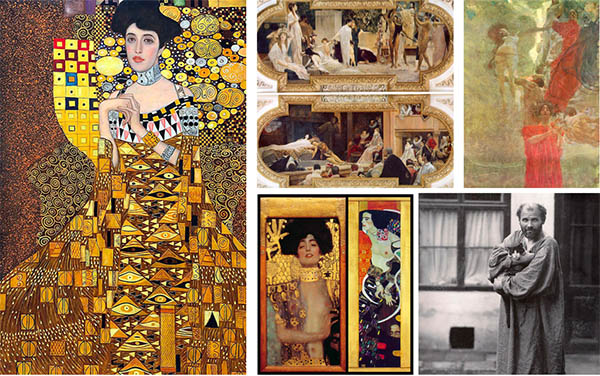 Gustav Klimt (1862 – 1918) // If nothing else, the image of this man in correlation with his profound and unique vision should stand as a testament for us to let go, to not be afraid of who we are creatively, for the happiness that will ensue in its genuine state will be all we need to measure our success.

His art transfigured from early highly skilled technical abilities into a personal style, which exemplifies the necessity of intense and intelligent study and skills combined with the mental aptitude to break free of those limitations and create without boundaries.  This is how artists change the world, last the test of time, with an intertwining of endless hard earned technical skills, honest self-respect in their own unique personal visions assisted by endless pondering walks, meditations and reflections, and the boundless curiosity to expand their knowledge in all mediums of life. 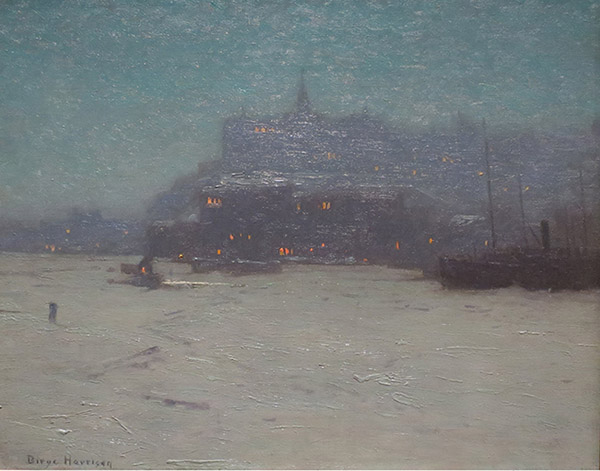 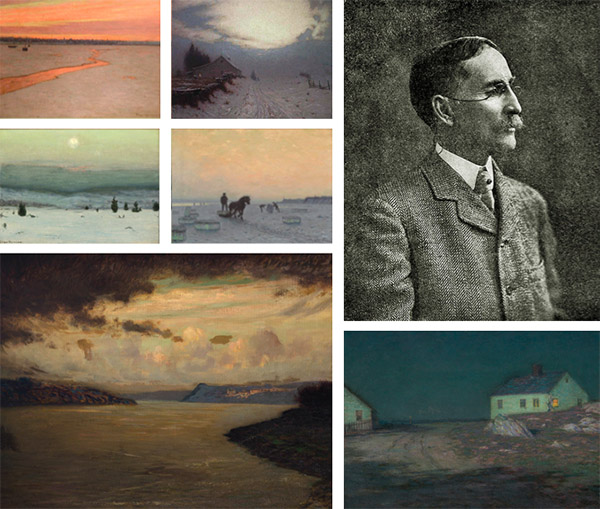 Lovell Birge Harrison ( 1854 – 1929) // An American landscaper who studied alongside Sargent under Duran and was a leading purveyor of one of my favorite movements, the Tonalists, alongside Whistler, Dewing, Mathews and Inness.

He captures the most difficult and beautiful moment in the day, in my opinion, the tipping point of twilight, when the colors harmonize across the horizon, too subtle to capture with any sort of camera, and almost too fleeting to capture in paint plein air.  Usually the moment when you’re walking back to camp or car and you say after a long day “oh man, NOW the colors are perfection…” you stare for a while, soaking it up with your soul’s memory, and then suddenly evening descends.

My favorite time to plein air.  Harrison not only believed that the term “Impressionism” really meant “… any work done honestly and sincerely before nature,” but that his work represented his aesthetic of emphasizing open-air observation rather than technical facility.

His book “Landscape Painting” has been a staple in my life from a young age.  In it, he speaks from the heart, not only of technique and practice, but of life, with chapters on the necessity of healthy mind and body necessitated by constant travel, as well as the depressive and seemingly manic states of creative types and its purposes and reasons.  A fantastic read, a wonderful artist.

This was the last piece chosen by Jeremy Mann for his TAKE OVER. Thank you again Jeremy, we really appreciate you taking the time to put this day together. 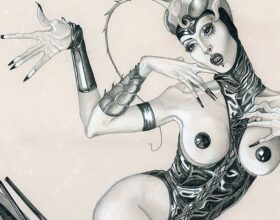 Interview: The Manic, Fetishistic and Dark Surrealism Of Ulorin Vex

Chronicles of a Future Foretold - a Poets & Artists Exhibition @ 33 Contemporary