Laura Castellanos and the Alienbots

“In a world of junkyards, spare parts, and smog, live the Alienbots. They exist at the bottom of the societal pyramid. The workers. The trash collectors. The slaves. The vast majority of Alienbots can barely call what they live, a life. But still, these creatures of carbon and silicon strive for something more. Even if they were built to serve… even if they might never get it…The Alienbots live in a Pop Surrealist version of 1984. Everyone has their place, under the All Seeing Eye. Bots are built from spare parts (metal and biological)— they’re built to do one job, well. From Junkbot 1.0.t.v to Clownbot .001.0, each Alienbot has a role to play. But the bots dream of a better life, moving up the pyramid, from worker, to warden, to banker.  Or, they want to tear the pyramid down altogether.  Some of the Alienbots have realised that there is no better life. Just more stress, more need, more desire for things, the higher you go. And that, no matter what, you’ll ever get enough. Never reach the top. Never be happy. Not as long as you play by someone else’s rules.  So the wisest of the Alienbots don’t. They fight. Shouldn’t we all?”

This fascinating, but somewhat bleak, narrative comes from the fertile imagination of Laura Castellanos and like all fables, it has its own moral. Laura draws on the materialistic nature of society and exaggerates it to an Orwell/ Atwood inspired dystopian nightmare. She has already begun to visualize this world and its characters through her quirky sketches and is now look to move forward with a series of painted works. I asked Laura to tell us a little more about this fantasy world she is creating. 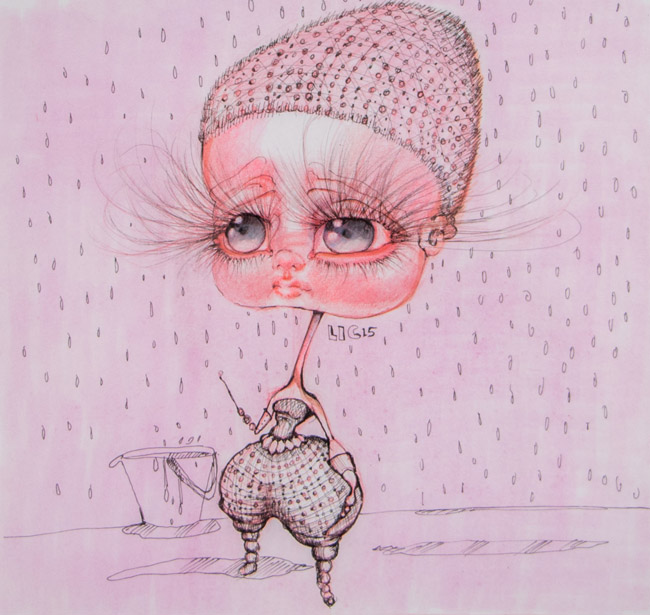 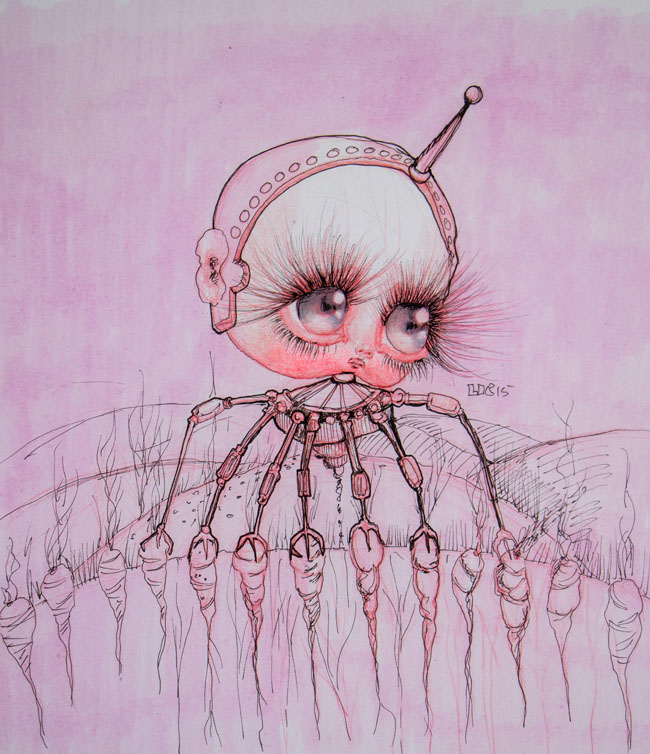 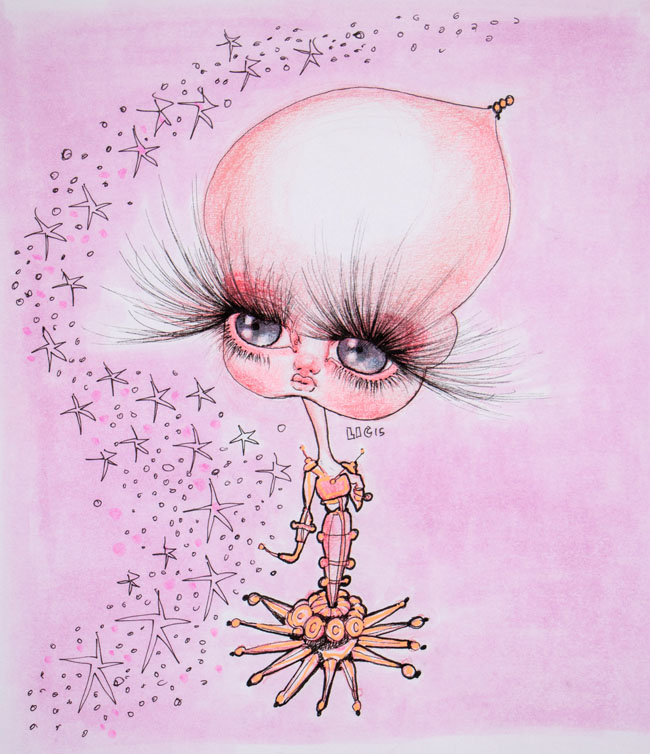 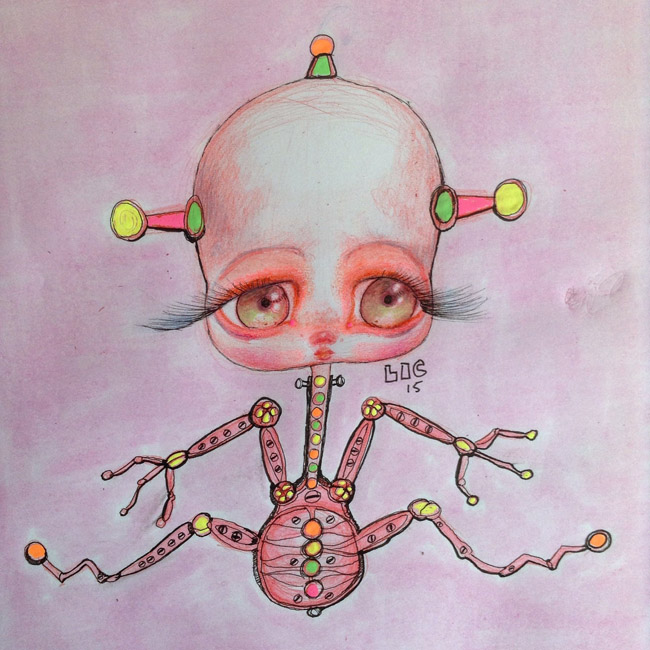 What are the Alienbots a metaphor for? Is this a fable devised to impart an important message or lesson?

The Alienbots are a metaphor for our modern society. They’re meant to teach us the value of the human spirit.

Why did you invent them? What made you think up this narrative?

I like to do a lot of research on old and new civilizations, and that sparked this vision of a futuristic, dystopian, yet very modern society. As well as societies of the past. There’s always been a pyramid.

When did they first come to you and what place do they have in your artistic narrative?

They came to me about three and a half years ago, right around the time my grandmother passed away. As far as their place in my artistic narrative, this started off as a book project, but now I plan to do paintings of some of the bots and hopefully grow it into something really cool. 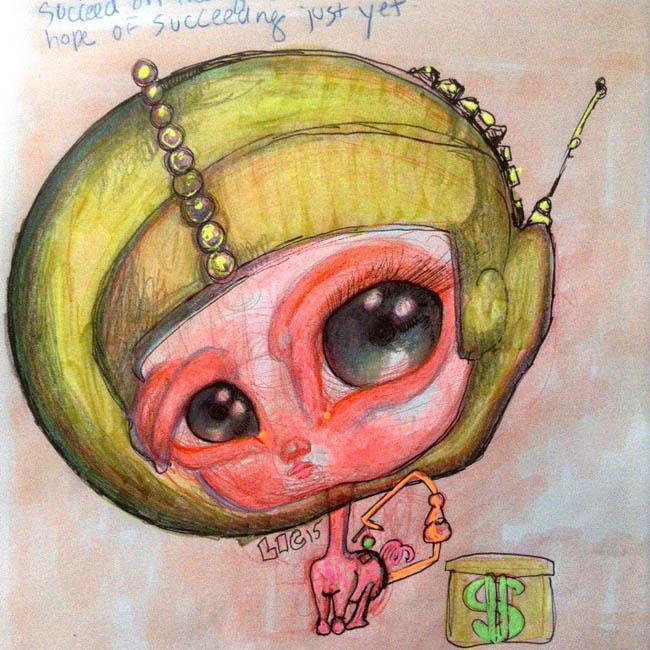 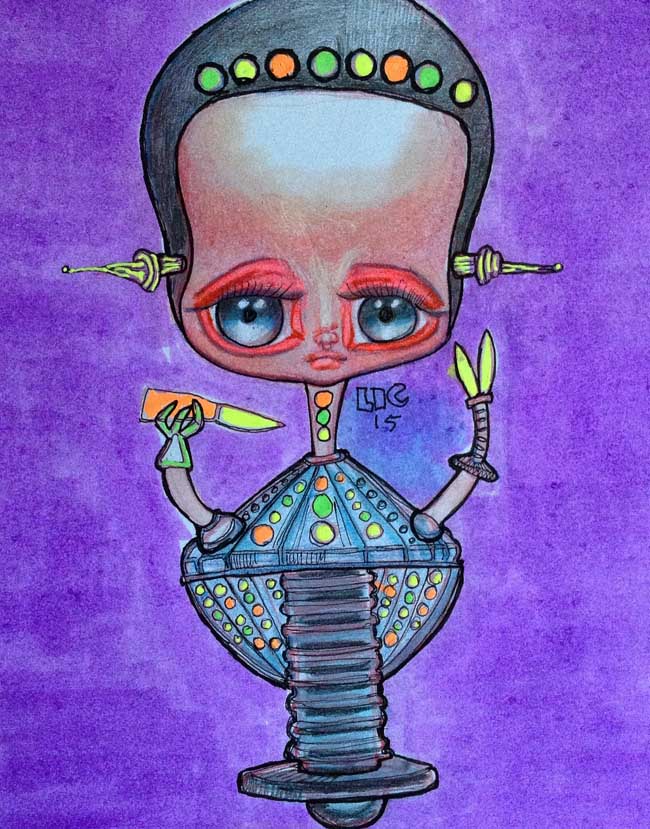 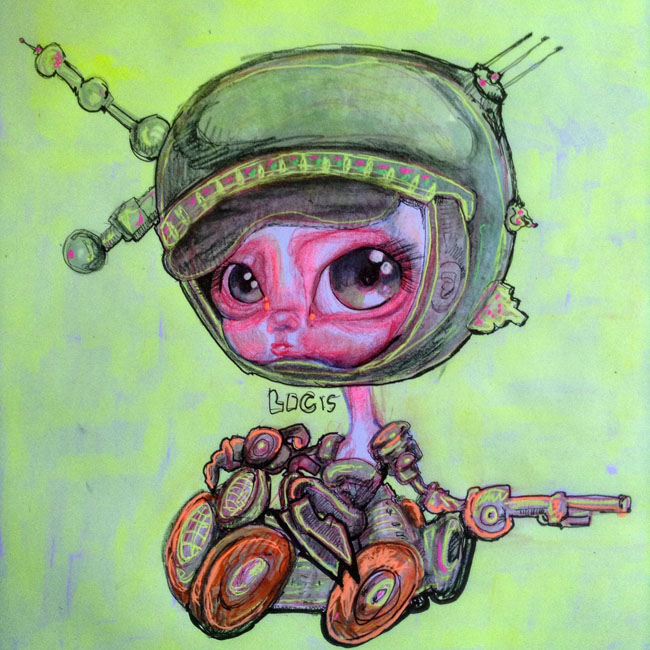 The Alienbots live in a Pop Surrealist version of 1984. Can you tell me a little bit more of what that looks like and how that society operates?

The Alienbots live in a society where they have been shipped from their planet of origin in tanks, and later matured in vats on this version of Earth. They are then transported to the junkyard, where they use spare parts, along with their vat grown organs to create this weird sub-race that’s built to do the lowliest of jobs. Although vat-grown, the Alienbots are still biological… but they aren’t perfect. So they can never be part of real, human society. Forced to endure the worst possible conditions that any man, human, alien or robot could ever imagine. 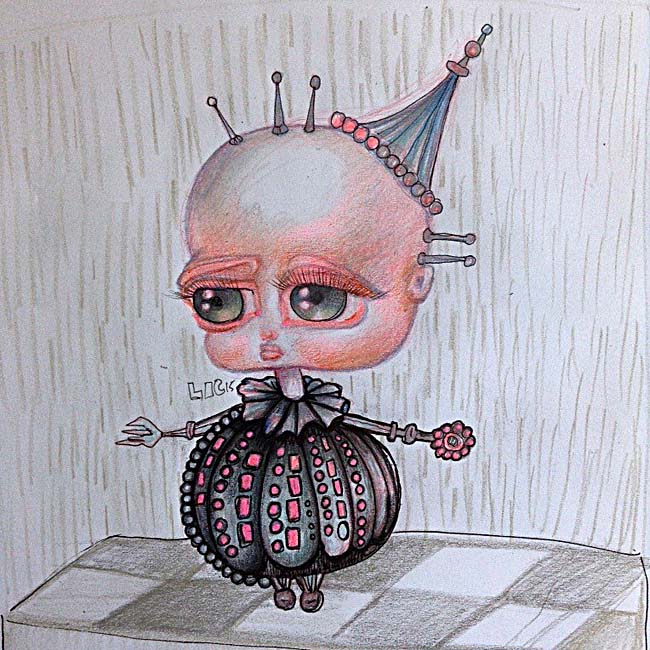 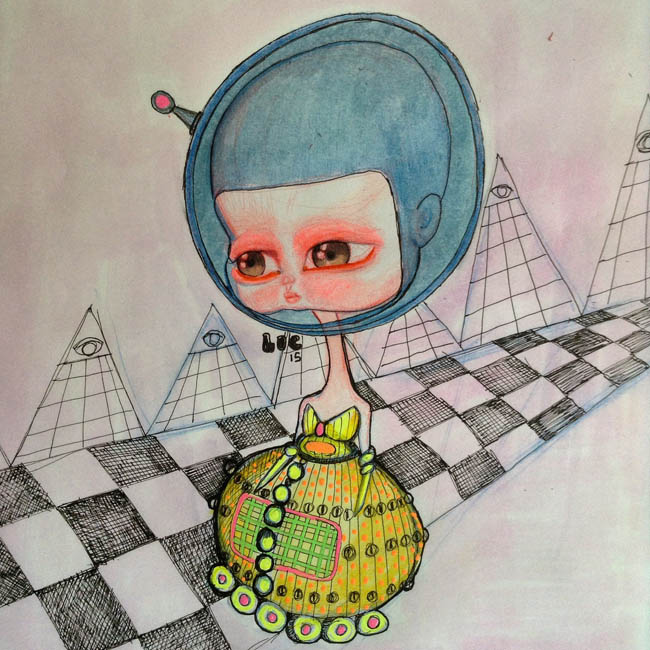 I know you are very interested in Ancient societies. Are the Alienbots based on contemporary society or do they integrate characteristics from any other societies or people?

It’s based more on modern society… but every culture has had a hierarchy. For better or worse.

Who were the Alienbots built to serve?

The Alienbots were built to serve the upper echelons of society on Earth. We never really see the humans on this Earth, since this isn’t their story.

What are the Alienbots like? Do you have a favourite?

Alienbots are just like you and me. Maybe not on the outside, but on the inside. Even if they look different, they’re still very human. The Alienbots are tender and sweet, unique and crazy. Even in their horrible living conditions, they still have hope. That’s what sets them apart. They are vulnerable and naive. For the most part, the Alienbots have not come together to fight yet, but that may happen later. Right now, they’re just trying to live their lives the best they can.  I have quite a few favorites: No Name Part #50, Junkbot 1.0.t.v., the Xerox Dryer 500, and Dopebot. 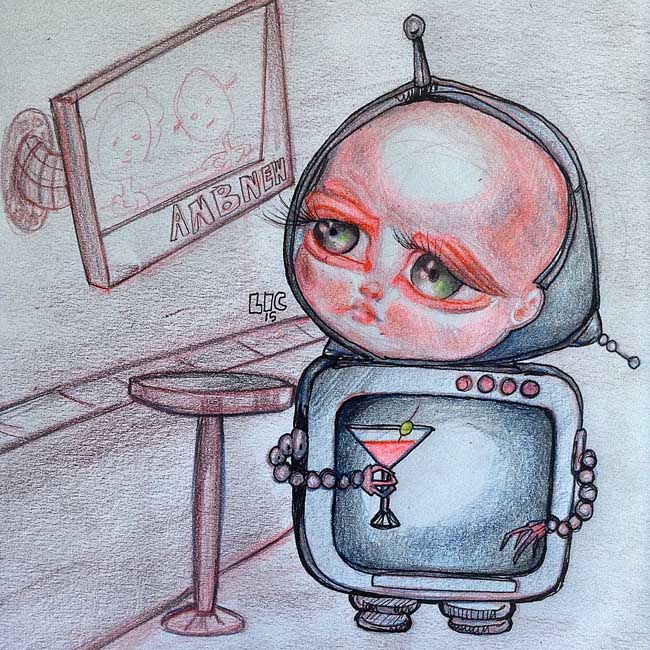 What kind of being is the All Seeing Eye?

The All Seeing Eye is a character we haven’t met yet in the book, but is the Big Bad of the story. He’s an alien, but not an Alienbot. He’s something new and different… but more on that in Book 2.

Can you describe their world?

Their world is filled with toxic rains, droughts, landfills, pollution, all mixed with terraformed, perfect cities, where the higher echelons live. Where the air is clean–the pollution has been pushed into the skies over where the Alienbots live. 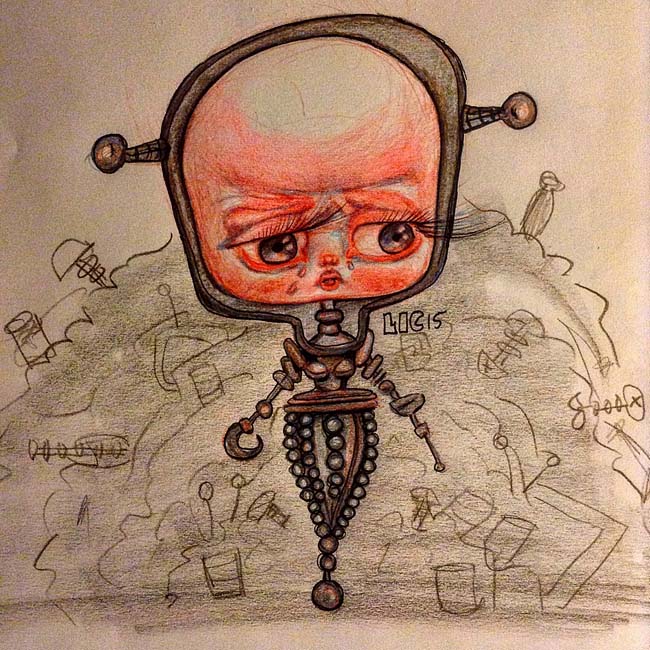 Right now it’s open ended. I plan to write more books in this series, working toward an end.  There are definitely more to come! I plan to do a body of work based on them. There’s so much more to explore in the world of Alienbots. I’m looking forward to working with this subject much more in depth. 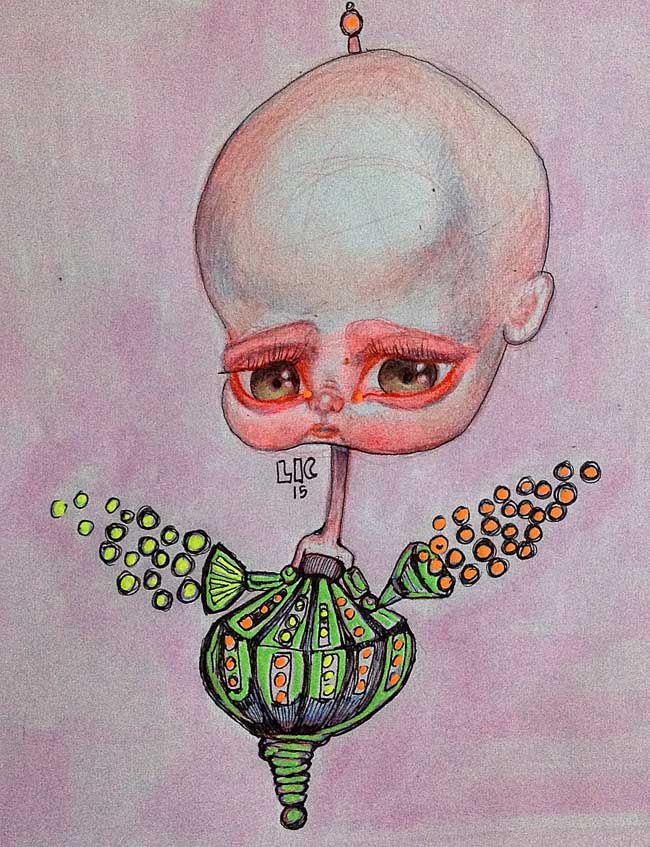 It will be exciting to see Laura’s Alienbot’s come to life over the coming months, but in the meantime, Laura regularly exhibits around LA with Sugarmynt Gallery, Hive Gallery and Cactus Gallery. 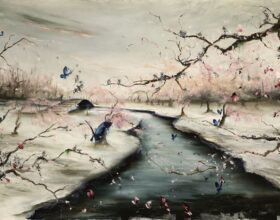 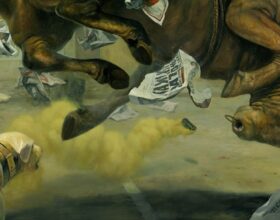 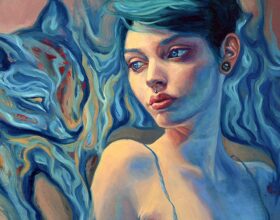