Every month, Beautiful Bizarre Magazine chooses one of our favourite artists to TAKE OVER our social media for the day. Last month we chose Marie Larkin to share with us the artists who have inspired her throughout her artistic career. Just in case you missed it, below we present the full TAKE OVER.

We are so happy to welcome Marie to today’s TAKE OVER! Over to you Marie… 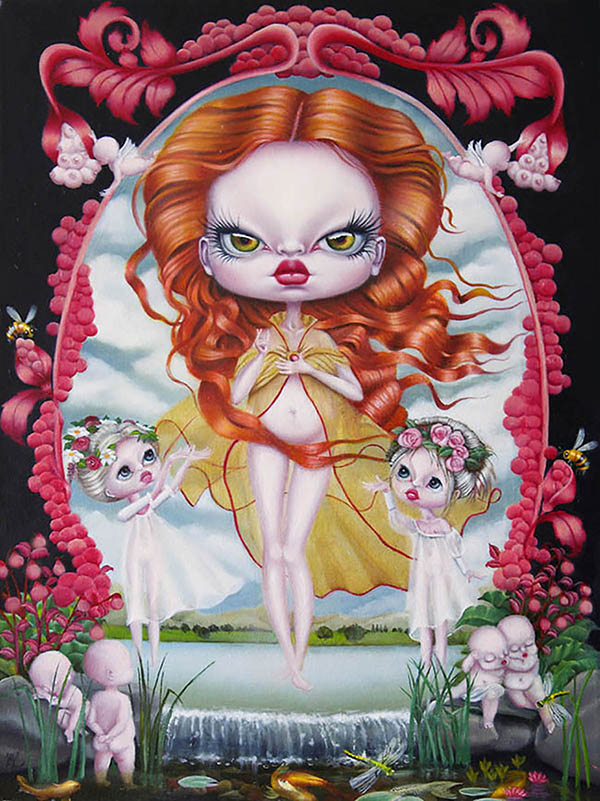 When BBM asked me to take over their socials for a day I was beyond excited to have the chance to reveal and talk a little bit about who artistically floats my boat! Then the reality of having to narrow it down to seven hit me. Then the list making began. And the adding… and the crossing out…and the adding back in because how could I possibly leave that artist out… it did my head in trying to decide. In the end, it’s a rather eclectic mix because I’ve approached it from the heart and included artists and artworks that I just really love. The same with the work I have chosen of mine. My favourite painting is usually the one I’m working on. But then that’s replaced by the next one I’m working on. So, I’ve chosen a work that I made from the heart and is quite significant for me because it represents an exciting point in my career and in the development of my ongoing artistic narrative.

Force of Nature was the painting I created for the BBM curated exhibition Femme to Femme Fatale at Modern Eden Gallery in 2016. It was a significant piece for me on a number of levels. The invitation to participate in the show came out of the blue at a really low point in my career. I had been severely knocked around by several career setbacks and disappointments. The kind that make you just wanna throw in the towel. The opportunity to participate in a show with such a high caliber of artists pulled me up by my bootstraps, offered me fresh hope and the whole experience gave me a renewed sense of confidence and love for what I do. The artwork itself was the first time my goddess archetype appeared and through this painting, I realized that she was going to become an important personification of many of the ideas about women I was trying to express. There is something that just feels absolutely ‘right’ about that painting, and I don’t often feel that way about a work and it contains many of my favourite elements and symbols…landscape, plants, cherubs, fish, water and the ‘titty pods’!
But enough about me! Now onto my chosen artists and artworks… 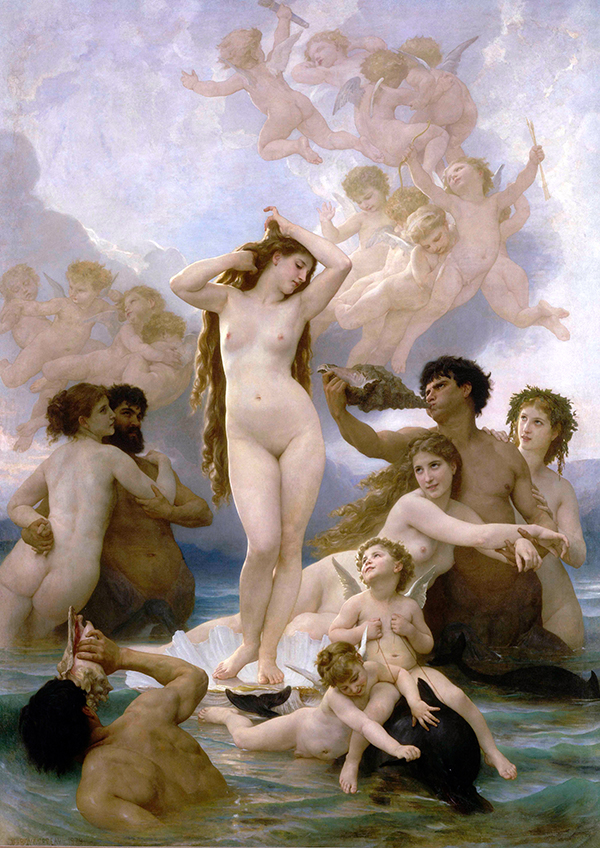 “The Birth of Venus” // William-Adolphe Bouguereau

I have a great love of 18th century painters such as Fragonard, Boucher, Watteau and Reynolds for the beautiful way they paint women, the translucency of their skin and the details in their hair and attire. But I have specifically chosen the Academic painter William-Adolphe Bouguereau and his work “The Birth of Venus”. This painting contains some of those elements that I love, billowy clouds, water and cherubs, but it is the languid, seductive pose, the translucent, milky skin of Venus, the soft falling hair, the rich colour that entrances me. It is a very clever figure composition that is at once dreamy and relaxed and at the same time dynamic. I could look at it for hours. 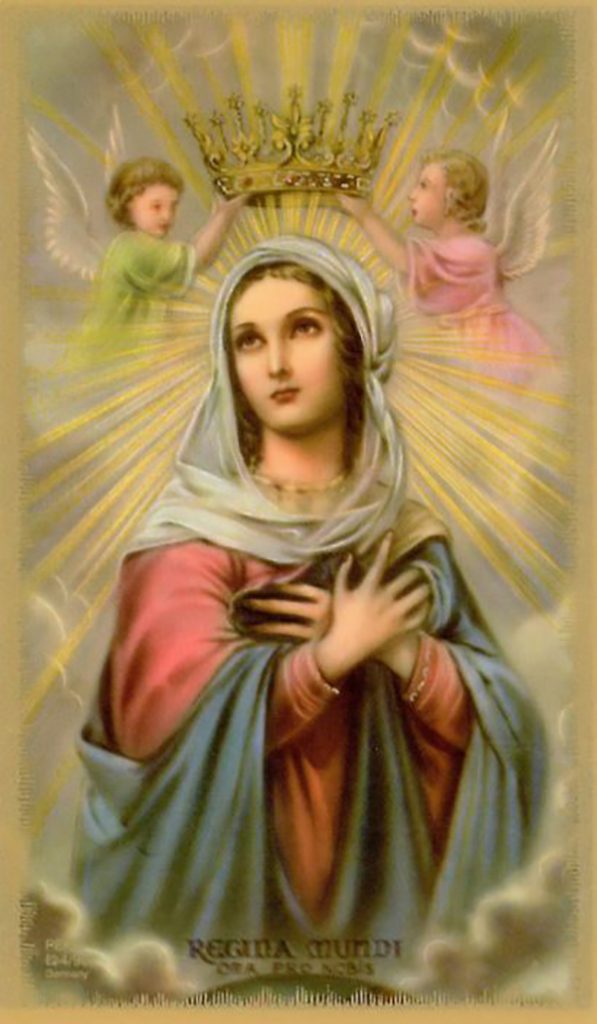 I don’t consider myself a deeply religious person in the sense that I go to church to worship, but religious imagery fascinates and resonates with me. I think it’s the ‘other worldly’ Romantic, something larger than us, nature of the imagery, much of it feels like fantasy imagery to me. I am moved by the ‘ecstatic swoon’ associated with religious imagery as a symbol of completely being given over to, consumed by, a feeling, emotion or state of being and the serene grace and holy gestures of religious figures. And again with the billowy clouds and cherubim! I am also particularly drawn to religious icons of Mary with the infant Jesus. She began appearing in my work when I was an embroiderer, but I see the image of the Virgin Mary, and have used her, in a more secular sense, as the universal female/mother symbol, woman as creator, as nurturer. When we nurse our babies we all look images of Mary with the baby Jesus. I am not Catholic but I have taught at a Catholic school and it was here I was introduced to Holy cards. These pocket sized artworks of religious imagery are uplifting, inspiring, beautiful and comforting. I have chosen one called “Hail Holy Queen”. 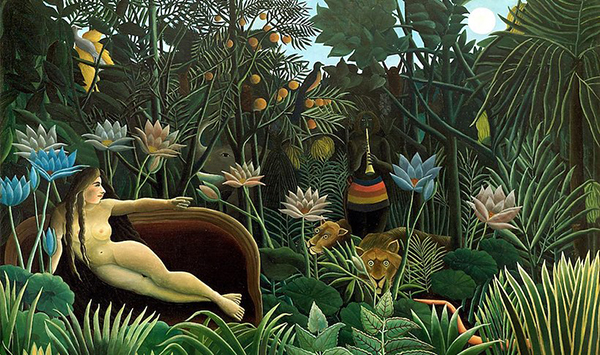 When I was asked to choose my favourite artists, I wanted to include an early love, one that represents the time at which I really locked onto art and became passionate about it.   At high school, I didn’t take art as a subject until my last two senior years. I should have taken it all through school, but in 3rd Form (Year 9), when we chose electives, I followed a woeful path of Latin, French and Mathematics to be with my friends before I came to my senses in 5th Form (Year 11) and elected Art. So, by the time I got there, I was very hungry for it and totally obsessed with the subject, spending many of my lunchtimes in the art room, hanging out with the art teachers and devouring the art books, poring over the images and reading about the artists. It was in this way I discovered the Naïve or Primitive School painter Henri Rouseau. It was the element of fantasy in his works, the richness of his colours and the intricate detail of his paintings that appealed to me. “The Dream” was my particular favourite. In all the time he painted his wonderfully exotic jungle scenes Rousseau never actually left France and he was a great admirer of William-Adolphe Bouguereau! I still love this painting today. 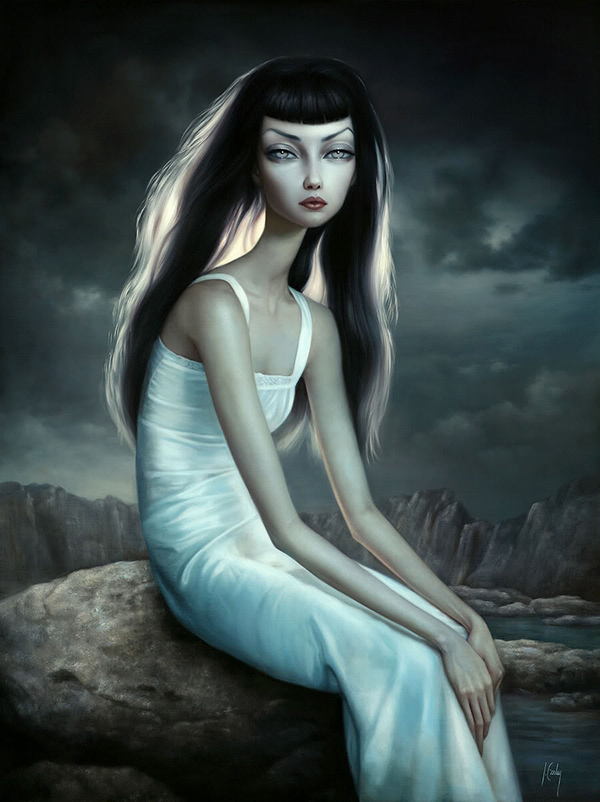 I couldn’t make this list without having Lori Earley on it. She is the first painter for whom I had both intense painter’s admiration and envy! I discovered her work around 2009 with her paintings from the “Laments and Lullabies” Series. It was looking at her work that made me want to try oil painting, as opposed to acrylics. Her elegant, stylised female figures are painted with breathtaking realism and the drama of Baroque lighting. When I first saw her work I was just blown away, mesmerized. I still refer to her work when I want to see how a master painter handles light, or the painting of skin or hair, or features such as lips and eyes. Sadly for her and us, Lori has Ehlers-Danlos Syndrome which has caused damage to the nerves and tendons in her painting arm, hand, wrist, shoulder and neck. It is a condition with no cure and sufferers can only seek medical help to improve their quality of life. Lori is currently doing this and I hope she gets a normal and pain free life back and can one day return to her easel to paint her incredible works. 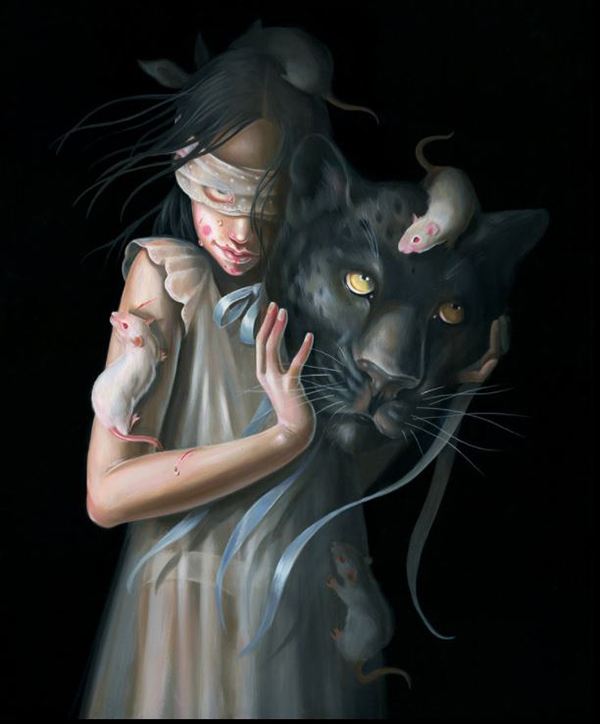 I have a dark side that comes out every now and then in my work, but I’m not very brave about giving it a real rush of blood, but my next painter doesn’t hedge her bets with the macabre and going over to the dark side. Hanna Jaeune paints the shadows, the bleakness, isolation and loneliness inside us in discomforting and troubling images. Her early work, very Surrealist in nature, and abounding with symbols really appealed to that darker side of me. Hybrid creatures, unexplained objects, floating animal heads and figures that hover just above black steamy waters reminded me of Salvador Dali, but blacker. Her work is evolving extraordinarily at the moment and the new multiple figure compositions are becoming more and more dynamic. There is a tension between the figures in recent works, and a sinister malevolence in the expressions of her young girls. Sometimes they are subversive and at others times tormented, lost or haunted. Like many of us they are beleaguered by their own inner demons and I like that she gives voice to that side of ourselves. I have a small Hanna Jaeune in my personal collection. 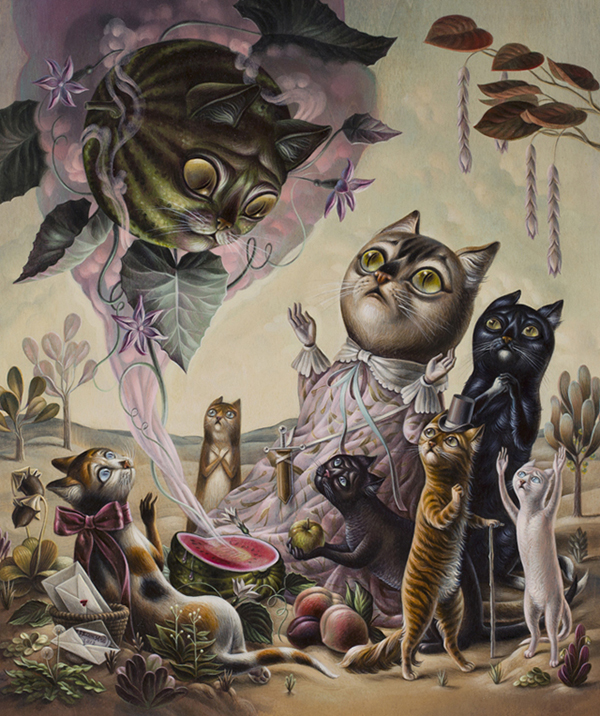 Another artist whose darker themes draw me in is Femke Hiemstra. But despite the darker themes her work is utterly enchanting. Her array of endearing anthropomorphic animals enact little narratives and I feel when I’m looking at Femke’s scenes these characters could be players on a stage. Their faces are lit as if from the footlight and it draws attention so cleverly to their expressions. Her paintings remind me of old illustrations and have a charming accessibility and an “old world folkart’ vibe to them, but the rendering, detail and lighting is exquisite. Femke doesn’t usually paint humans but her animal characters display an incredible range of human emotions through the expressions on their faces and in their very human gestures and I am utterly captivated and engaged by them and the stories they enact. 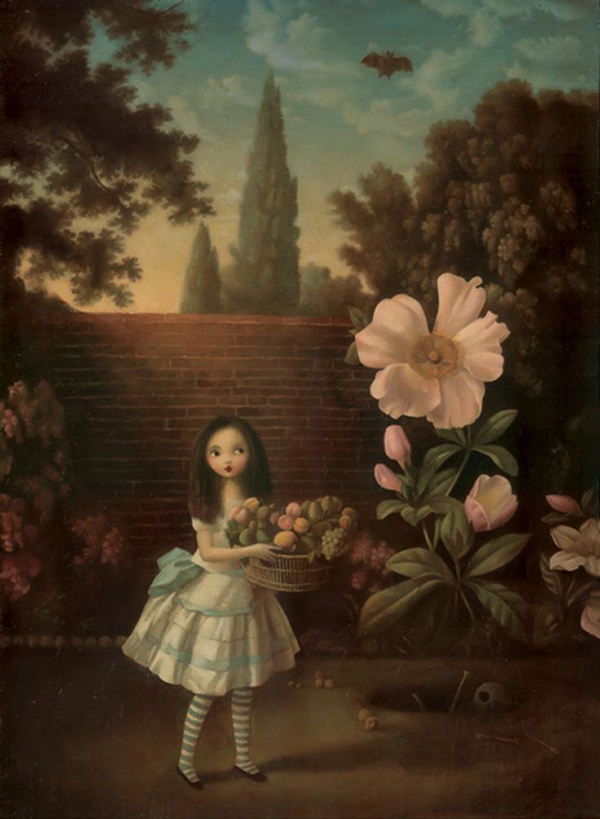 When I look at Stephen Mackey’s paintings I just think; “I wish I painted that.” His technique is flawless. Skin, flowers, drapery are painted with an alluring hazy softness. It’s like velvet.  I love his colour palette with its dark muted tones, the ruby reds, the dusky pinks, and the olive greens. I love the way a painting might be almost entirely dark but a face, or a figure is illuminated by a soft and subtle light. He makes skin so luminous, fruit, so luscious, flowers so beautiful I am almost reeling in their heavy perfume. I just want to drink it all in. His dark, brooding, paintings are atmospheric and mysterious in a very traditionally Surrealist manner. They are quiet paintings that whisper their mysteries to me but never quite give them up. I like that they are exquisitely painted in a very classical style but the pretty scenes or female figures are subverted by the addition of odd or unexpected elements into the works. It’s Neo Classicism with a Surrealist twist and I’m hooked.