“Rage, rage against the dying of the light.” – Dylan Thomas

As Bella Kotak shoots, time is against her. The Golden rays are her only help, yet they flee the night sky like fairies in a rush to get to their secret celebrations. She has to work with urgency and purpose to capture her masterpieces. Her fleeting slivers of magic in a increasingly cold modern world.  Golden hour dances into Twilight.

Twilight fades into night and the magic disappears. All that remains lives in Bella’s camera. 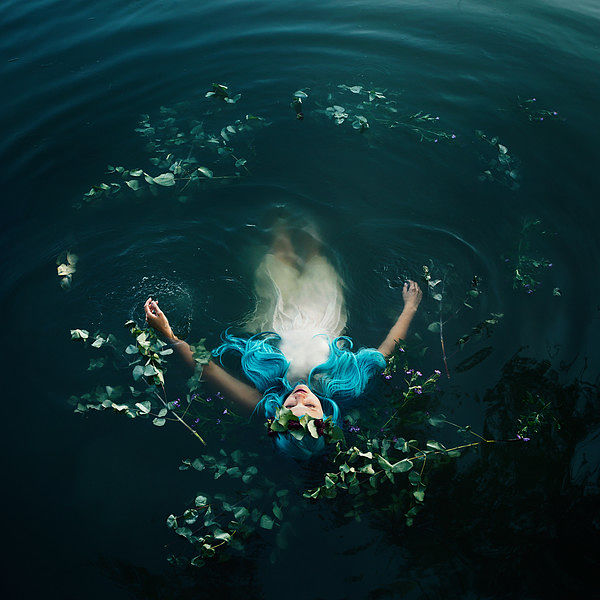 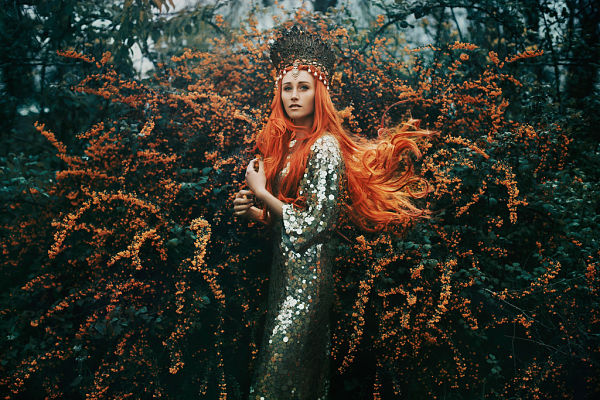 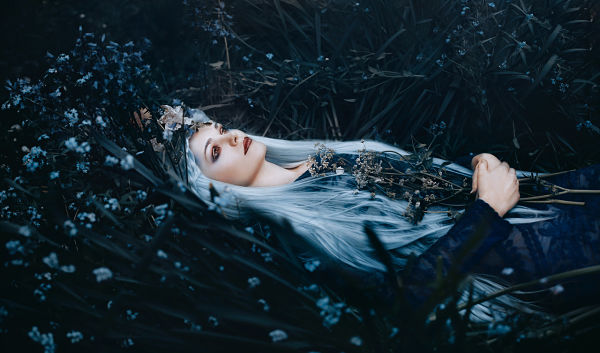 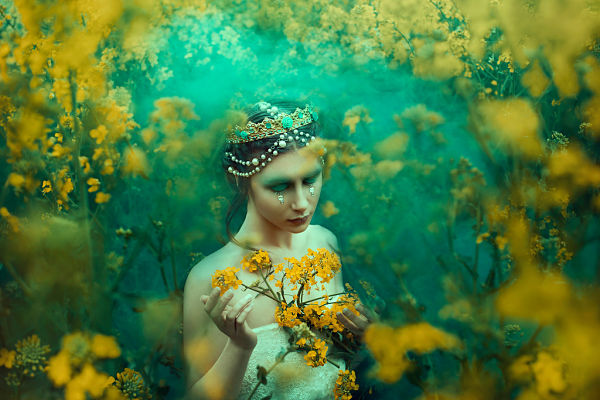 Bella discovered her floral calling, when in a creative funk noticed that a local florist discarded large bins of flowers. She asked if she could use the dying flowers for an idea. The idea blossomed into colorful magic jewels of art and stories.

Bella’s art is beautiful. She primarily shoots at golden hour and twilight. This is when the light is the best in the world. Therefore, there are no harsh shadows in her work. This gives her work softness, fragility. But does not take away from its power, urgency or grandness in vision. Because she shoots during golden hour and uses blossoms, her shoots have to be carefully planned. I suspect, if she simply showed up like an unprepared student on the first day of final exams, her work might not be as focused or successful. It’s clear that the costumes, backgrounds, makeup and hair all work together to tell a cohesive story. After she captures the magic in camera, Bella works to remove any distracting elements such as misplaced wisps hair or highlights. The viewer is left with is a sense of singular concentrated magic, punctuated with striking feminine beauty.

Her photos are perfect and polished. They have me daydreaming nonsensical questions like How much fairy tale time do her fairy tale characters spend in their fairy tale lives getting ready for the day?  Or do they greet the morning with a fairy tale “I woke up like this” smile? Perfection isn’t bad, on the contrary it makes Bella’s slivers of magic all that more elusive and magical in nature. And that’s something we can all enjoy. 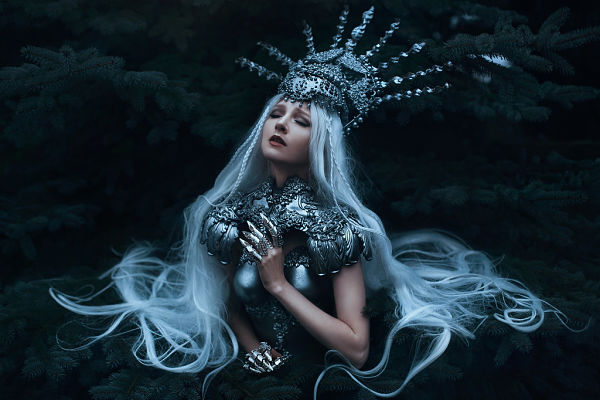 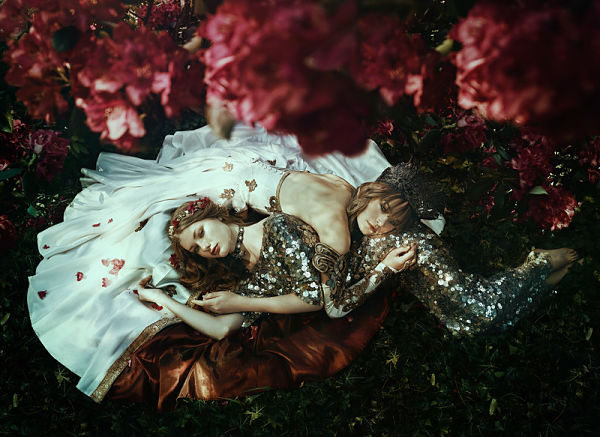 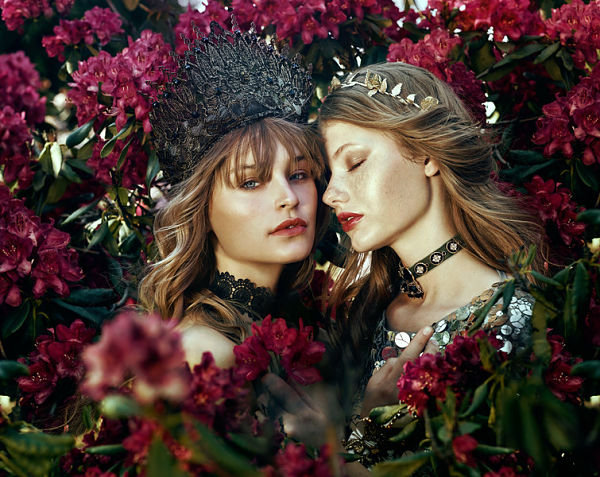 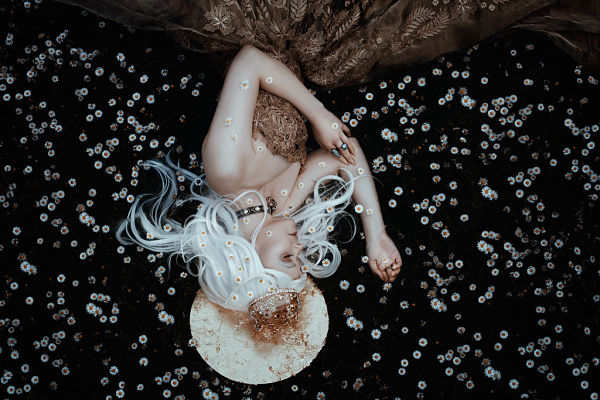 Recently I had a chance to ask Bella about her process…

You’ve talked about being able to easily attain the flowers you need, as well being inspired by the nature that surrounds you, what part of the world is that? How did it become so special? (I know your bio says you live in Oxford, but I primarily know it for its university, so was hoping to learn more)

I’m based in Oxford, the same place where Lord of the Rings and Alice in Wonderland were written. It’s no surprise to me as being there feels like living in a storybook. Warm stone buildings, thatched roof cottages, bluebell woods, overgrown paths, rivers, flowers spilling over low walled gardens and so much more. England glows in the spring and summer and I draw my inspiration from the nature I’m surrounded by. You work with what you have and I’m very fortunate to have such beauty around me.

You’ve also talked about being inspired by Greek myth, fables and magical creatures. What Fable inspires you the most? Why?

I take inspiration from tales of adventures, of strong women with wild hair and hearts, of other worlds and the imaginative creatures that live within them. My inspiration comes from anything that sparks a light in me; it could be from a particular dress, an overgrown location, light at the end of a summer’s day, or from the creative and imaginative worlds shared by those who have come before me.

Some of my favourite worlds are the ones created by Philip Pullman in his books His Dark Materials. I love the idea of peeking into other worlds, moments of magic hiding in the everyday. In his story, there are “tears” in the world, these hide in the bushes, or under a tree. Peeking or stepping into this tear transports the viewer into another world, a parallel world existing on another plane. Something about this strikes my imagination and it’s this feeling of otherworldly magic that I try to capture and share in my work.

What magical creature inspires you the most and why?

Mermaids and tiny fairies! The Little Mermaid was one of the first movies I watched and later, as a child I watched Ferngully. Both these tales left an impression on me. Both magical beings don’t have limits to where they can go and move, our physical bodies however are held by gravity, the only thing that can fly and soar is our imaginations.

As an adult, you’re encouraged to let go of fanciful notions, of fairytales, and to embrace the world as it is. The thing is, I appreciate the beauty of the everyday so much so that little flowers by the side of the road cheer me up immeasurably. However, it’s when I combine the ordinary with creativity, both my own and of the people I collaborate with, that’s when I feel the magic. In those moments, real life and fantasy merge and I’m transported to another world. It gives me great pleasure to share that.

You create fairy tales in slips of time, and capture magic in ordinary places. What’s the most ordinary place you’ve captured a slip of magic? What process did you follow to capture just it’s magic? Can you please share the image?

I can’t really pick a place as I’m often shooting by the roadside.

There’s a patch of public land by a path I often jog down. I’ve been watching it all year, quietly taking notes of what it looked liked through the seasons. It’s just a piece of land, there’s nothing particularly special about it and most people don’t look twice. Last summer it looked lush and green, I didn’t have a chance to create in it however, I had a feeling it was going to look interesting this spring, well, I had no idea how beautiful it was going to get. By the time the warm spring wind arrived this year, the bluebells were out, little shoots of green, and moss were collecting on this patch of overgrown land and the colours I’d been watching unfurl inspired me to pull together this shoot. I reached out to Jo Fleming, a designer whose dress I could envision perfectly in this scene, I also contacted a model friend of mine, and one evening in the magic golden light, we created this picture. 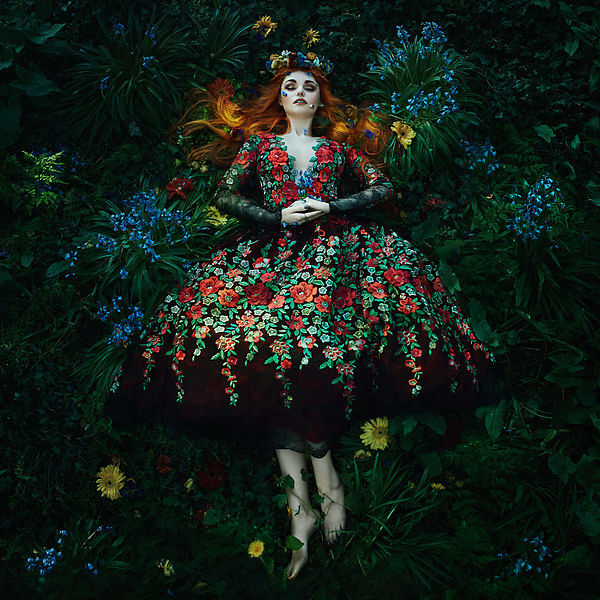 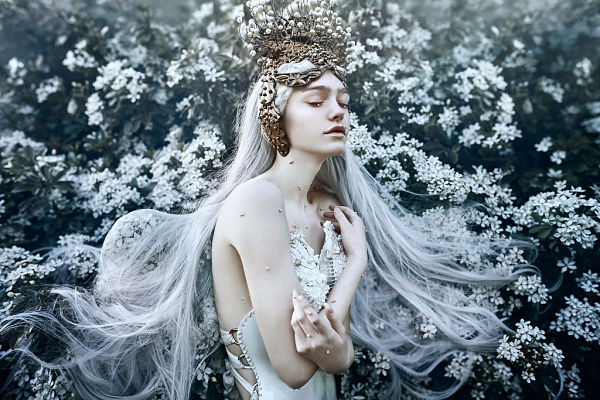 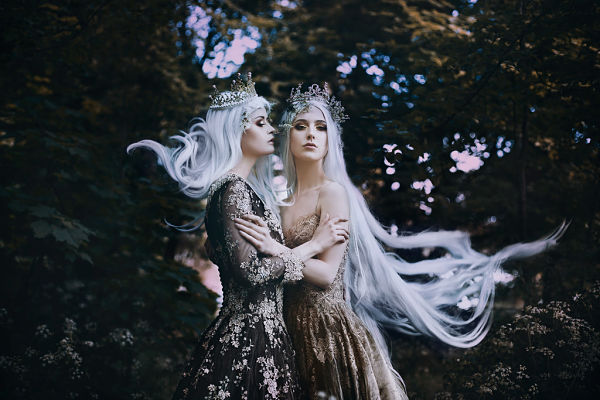 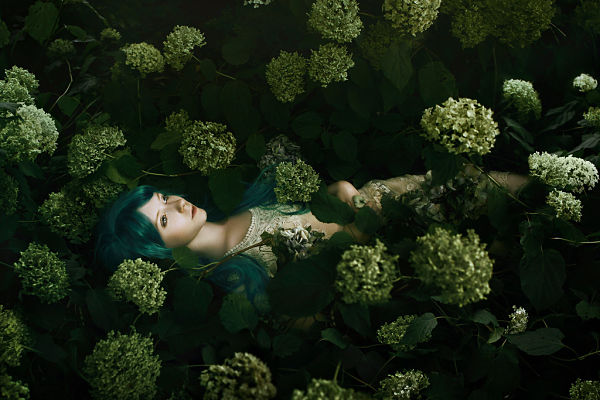 The colors you use in your photos are so unique, especially the hair colors; what inspired these? Were these colors captured in camera or in created in post?

I enjoy using wigs in my work; to me they are just another way to build up a character. I find all my wigs on eBay and have quite the collection in my studio! Often the colours are tweaked a little in Photoshop to suit the mood and direction of the image.

I get so many questions about my colour toning process that I decided to share my tones in easy Photoshop action format that you can download and run. Here’s the link for anyone who is interested – www.fineartactions.com

I’ve read that you often work with Pratik Naik. How did that collaboration come about? How integral is his influence for your current artistic process?

He’s my boyfriend and we’ve worked together since the moment we met. He’s an amazing retoucher and has a very good eye for what makes a striking photograph. Working with him has elevated my work. I’m much more conscious of the decisions I make from image conception through to post process. His are the first eyes to see a finished creation from me, after which he will add his Photoshop skills to polish the final image.

What is your ideal outcome when creating your art?

That it’s true to my artistic soul. That it speaks and connects with me first and only then will I share it with the world. I want to see my work printed big, hung in galleries, to be in a book that people can easily reach for, to inspire, motivate, and transport them to another world.

I want to, in my own way, share this connection that we have with each other, to the earth with we all come from, and to remind that even as we get older the magic will never fade away if you don’t want it to. It’s there, hiding in the beauty of the everyday.

Thank you Bella, where can people find you? 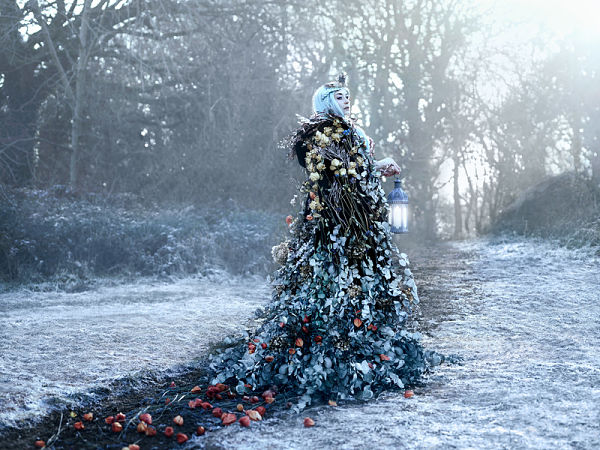 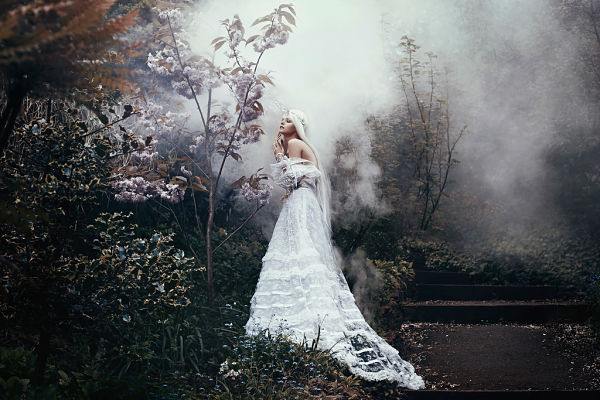 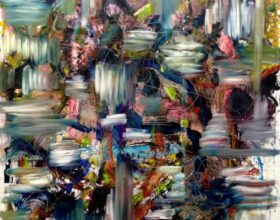 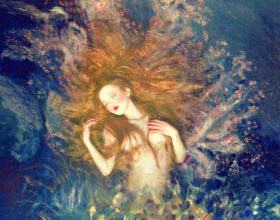 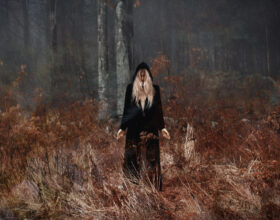 To inquire on the entire collection, please contact info@havengallery.com

Bird watching with those big, dreamy eyes. @strangeling never misses the mark on her emotional and surreal narratives.
Did you know you can watch Jasmine paint live on @twitch? Yep, you sure can. Just look for the link in her profile and user ID JasmineBecketGriffith.

INSIDE ISSUE 34 // “I have this weird sense that there is this amazing painting inside of me and my job is to make sure it arrives into the world before I die. I couldn’t bear the thought of not fulfilling that potential.”

Read our article about @sharonenglandart in Issue 34 of Beautiful Bizarre Magazine.

How magical is "Mermaid and Tree Spirit" by @natalieshau?! Love this dark, romantic mood so much.