“Did I request thee, Maker, from my clay
To mould me man? Did I solicit thee
From darkness to promote me?”

Frankenstein, originally a ghost story conceived in the Swiss Alps, reminds us of our responsibility when creating life, taking life and the science, magic and chance surrounding it. But what does it mean to play god – to create a creature, to make the intangible tangible? ‘The Frankenstein Complex’ explores Mary Shelley’s themes through the eyes of the monster artisans. Fortunately, the parallels are far more tentative.

‘The Frankenstein Complex’, in essence, is a documentary detailing the history and process of creature design from the perspective of its innovators, artisans and filmmakers. From the humble beginnings of Lon Chaney, ‘the man of a thousand faces’, to the special makeup effects of Rick Baker and Rob Bottin; high speed puppet and  stop-motion of Willis O’Brien, Ray Harryhausen and Phil Tippett; animatronics of George Méliès and a wealth of other physical and CGI/digital effects geniuses. 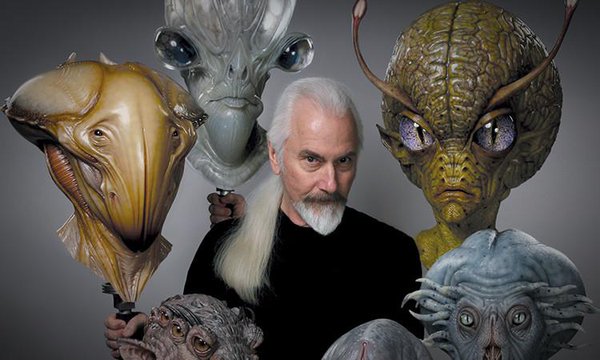 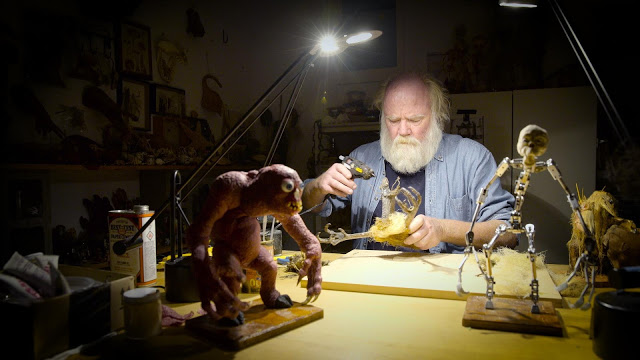 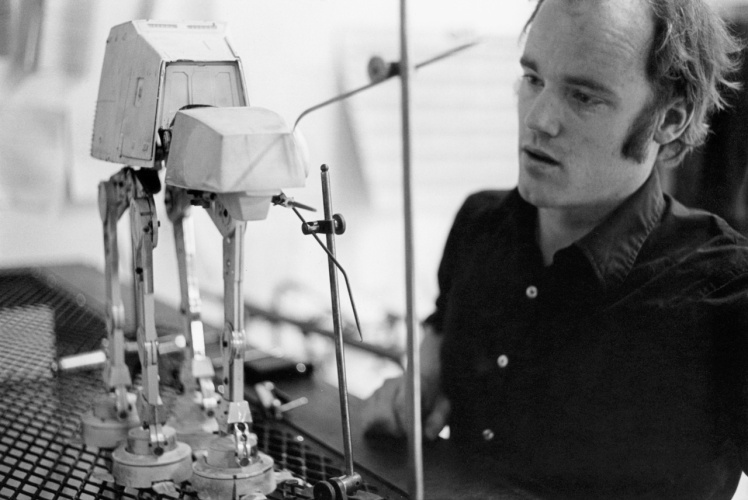 But why give The Frankenstein Complex your devotion for 107+ minutes? Well, for two reasons: the first is because of the list of universal beliefs to which all of humanity subscribes is a short one…but monsters makes the list. From our earliest cognitive freedoms as Homo sapiens, we have feared the intangible tree spirit, the boulder spirit of Africa, or the great beast that will take us in the night. The words we have used to describe them may have changed (myth, legend, God/Goddess, superstition, fairy-tale) but they are ultimately monsters of our mind, our creations. Our ability to believe in a tree spirits comes as easy as belief in the value of the metal gold, or paper money. Why and how we have this connection and are emotionally affected by such monsters is explored within the relatively safe confines of The Frankenstein Complex. 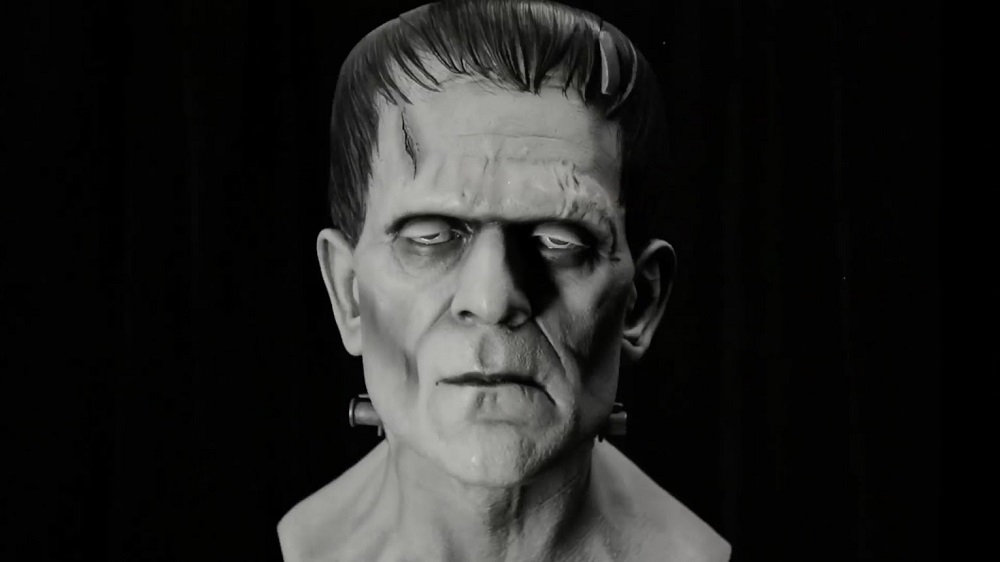 Secondly, you watch The Frankenstein Complex for the majesty of monster design. An artisan’s ability to take an idea from concept to a fully realized and usable monster is extraordinary. How did they bring the complex biology of the Alien to life? What about the iconic Jurassic Park scenes, or the daytime transformation of human to werewolf in ‘An American Werewolf in London’? These innovators were pushing the boundaries of the visual medium in ways that made people sick and faint during screenings of The Exorcist, and questioning whether a shark can indeed board a boat in the same fashion as Jaws.

In 1931’s ‘Frankenstein’, Boris Karloff portrayed Shelley’s Frankenstein creature in one of the most iconic scenes in cinema history. The special effects makeup genius of Jack Pierce coupled with Boris’s perfect bone structure created what has become the quintessential poster-child of special effects makeup. Later, in 1982, Rob Bottin’s work on John Carpenter’s The Thing became the holy grail of creature effects, which stands the test of the time to this day. Their ability to marry source material, artist rendering and artisan craft, to serve the story and environment in which they exist was so profound that it set the standard for monster movie making going forward.

These are the reasons for watching this documentary. 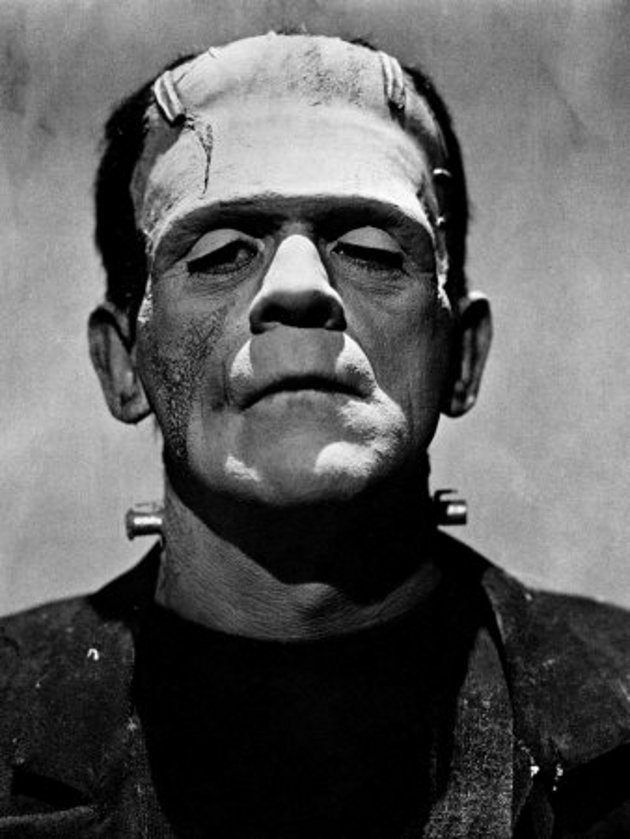 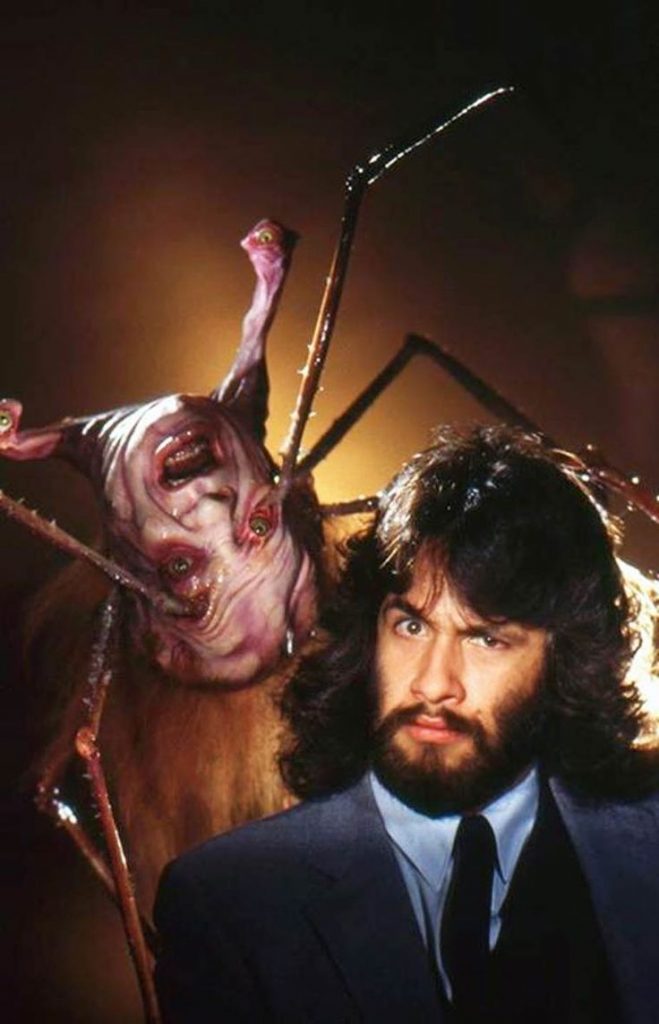 “Science fiction plucks from within us our deepest fears and hopes then show them to us in rough disguise” (W.H. Auden)

There are many elements to a successful monster design. It must encompass attributes that work within the environments and worlds in which the creature inhabits. Del Toro provides the example of the xenomorph in Alien: the creature design works because it works down on the planet but also within the ship environment but it wouldn’t in a Wall Street setting. ‘You cast a monster in the same way you cast an actor’ (Del Toro).

But what process is involved in creating a fully realized monster? To give an overly simplistic breakdown of the stages: Script/source materials lead to an artist’s rendering, which leads to the production of the monster. The script should provide enough of an insight into the creature to evoke imagery that allows enough creative freedom for the artist at the rendering stage.

“The Alien is clearly visible. A maze of complicated biology […] the creature has extruded a long tube down his mouth and throat. The appendage ending at the base of the esophagus.”

At the artist rendering stage, producers/directors etc. may be consulted on its design – here, practicality isn’t the concern, creature design is. This rendering is typically a 2D sketch or a maquette.

When it comes to production, this is when artistry meets practicality. The aim here is to make the abstract, tangible. The character should define the technique, not the other way round. As eluded to above, the choice of technique and combination is vast. However, the technique used must allow the creature to do what is required of it but in a way that will connect with the audience and elicit an emotional reaction. Understandably, choosing a technique elicited some controversy, especially during the advent of CGI and digital effects. The discussion around this forms most of the second half of the documentary. 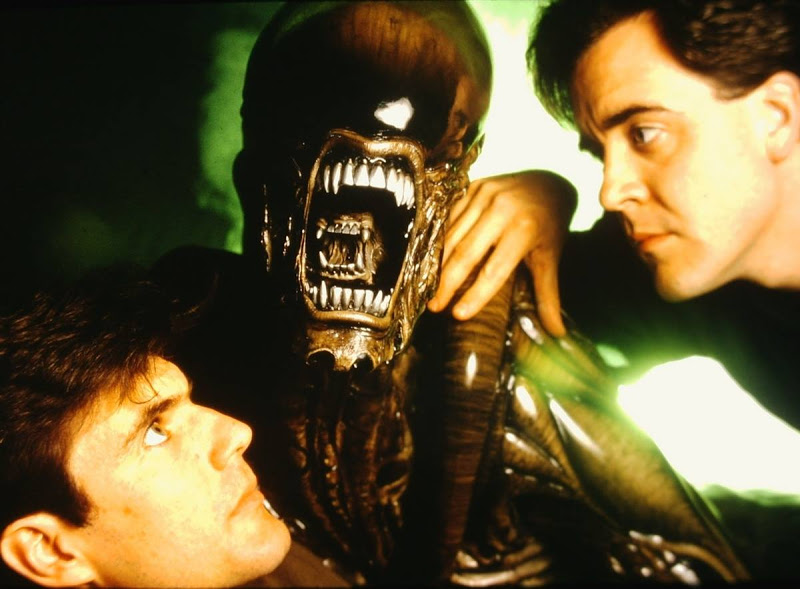 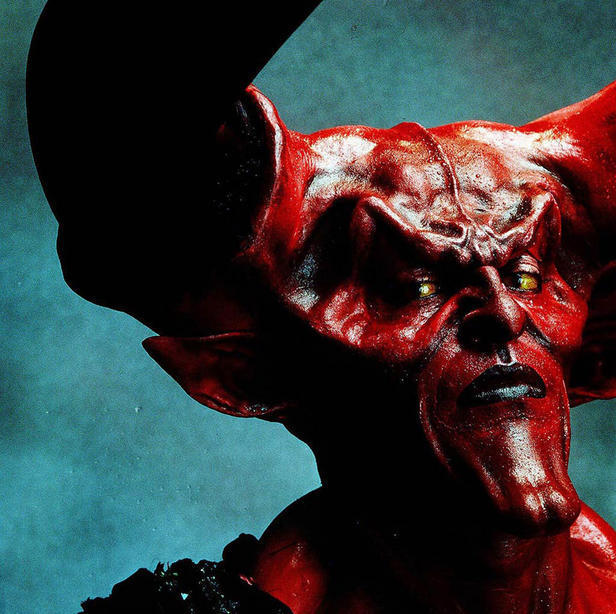 With the development and successful use of digital effects in films such as Jurassic Park (1993) and The Abyss (1989), film studios craved the time-efficiency and ability to finish scenes during post-production, even though Jurassic Park had a harmony of practical and digital effects. In its early inception, digital effects were met with some industry resistance but the consensus shifted to a reasoning that the technique should allow for storytelling over all else. In an ideal world, the limitations of practicality, time and cost should not dictate technique but invariably they do. It’s just a matter of fact that some techniques aren’t appropriate for the monster and scene you’ve created. For example, if you want a monster to walk across a room and pick up a glass – getting a puppet, animatronic or robot to do so effectively would be very difficult and impractical at times… unless you so happen to have ASIMO technology at your disposal. Every creature technique, whether it’s practical or digital, has its practical limitations: the only thing limiting the technique, is the technique itself. Innovation in silicones, digital processing, robots and facial/phoneme recognition, as well as the production and accessibility of these technologies, can lead to their application in pre-existing techniques to allow them to do things, which weren’t practical 20 years ago. 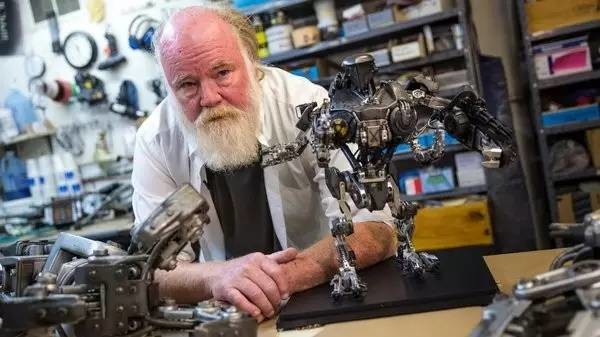 If you want to see the type of struggles faced there’s a wonderful five part documentary called ‘Back Into the Abyss‘. This provides a fascinating look into the making of Steve Johnson’s creature for James Cameron’s, The Abyss: ‘I need a physical creature to be translucent, paper thin, work underwater, change colour be angelic in look and movement… and we have no idea how to do it’.

But sometimes a limit in the technique forces a film to adapt in a positive way. Take Steven Spielberg’s (1975) Jaws… they knew they couldn’t show much of the shark because at the time it wasn’t the sexiest looking shark ever conceived. When this was realized, Spielberg adapted scenes to a first-person perspective and left the viewer in suspense for vast amounts of time. When Jaws is finally revealed it elicits a powerful emotional response that every memorable monster creates. In this situation, the technique served the monster and the story and filming adapted to provide the best environment and set-up for the creature payoff.

Would a digital ‘Jaws’ evoke the same reaction in audiences?

I don’t think so either, Steve Johnson. 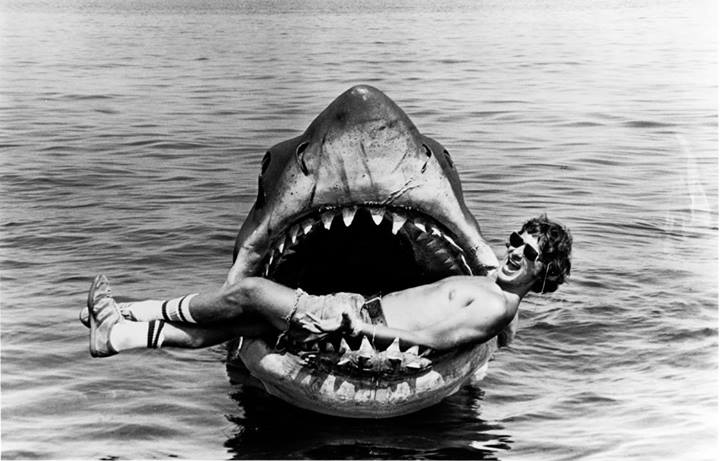 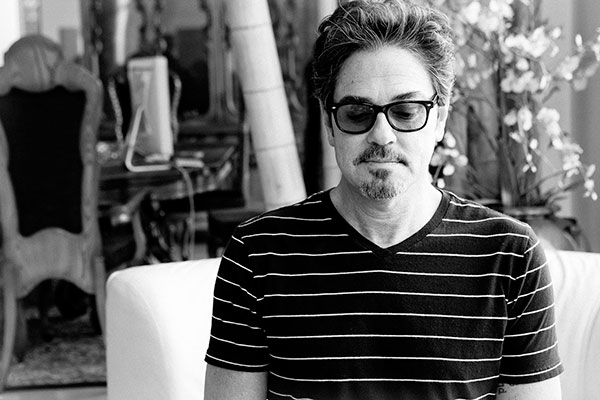 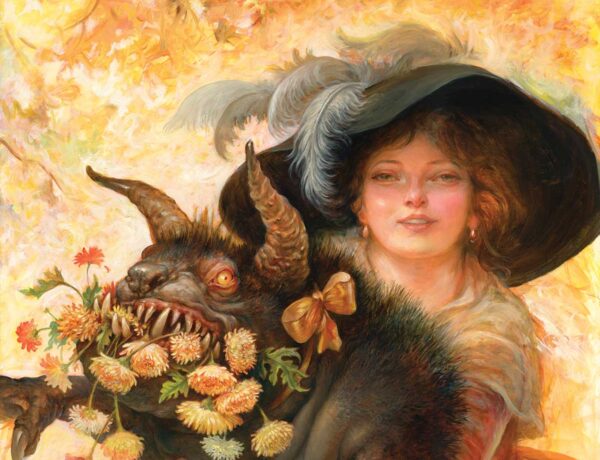 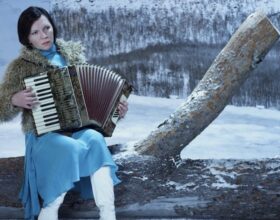