Every month, beautiful.bizarre chooses one of our favourite artists to TAKE OVER our social media for the day. Just in case you missed it, below we present the full TAKE OVER from our February artist, Troy Brooks.

His stunningly elongated women are immediately recognizable. These beautiful and intriguing females reflecting old Hollywood glamour and sensuality are some of my favourite pieces in the art world. Behind the art, Troy is an incredible man, with an open heart. He shares his story readily and this sensitivity and candour reflects in his pieces, drawing the viewer into the narrative, beckoning you to look behind the faces into the “real story” of these soft and beautiful, sometimes domineering , protagonists.  Over to you Troy. 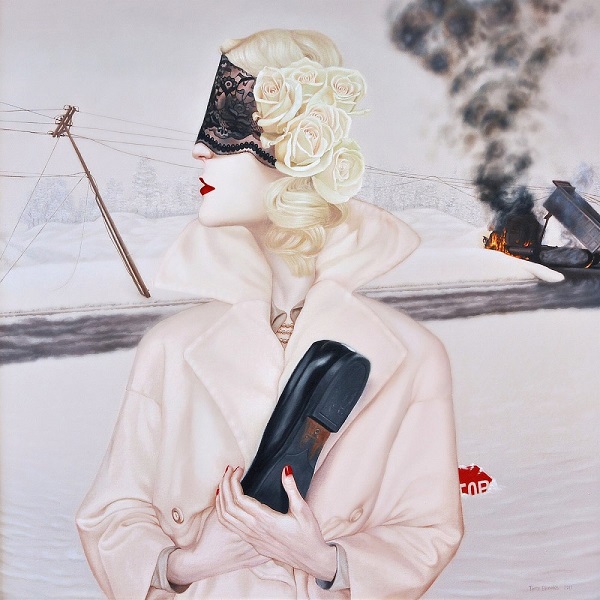 One of my girls from 2011 will always be a sort of hallmark for me. She’s called “Daddy” and she sprang from a 2011 series I did titled ‘Colossus’. It was heavily influenced by the writings of Sylvia Plath. Her poem “Daddy” was what started this piece. That series came out of a painful time and Sylvia Plath was probably not the best thing to marinate in. Now, when I look at this painting, I see layers I didn’t know were there, which is often what happens when the work is allowed to surface intuitively. I think, to a degree, just about everything I’ve ever tried to express through my art is woven into that one. 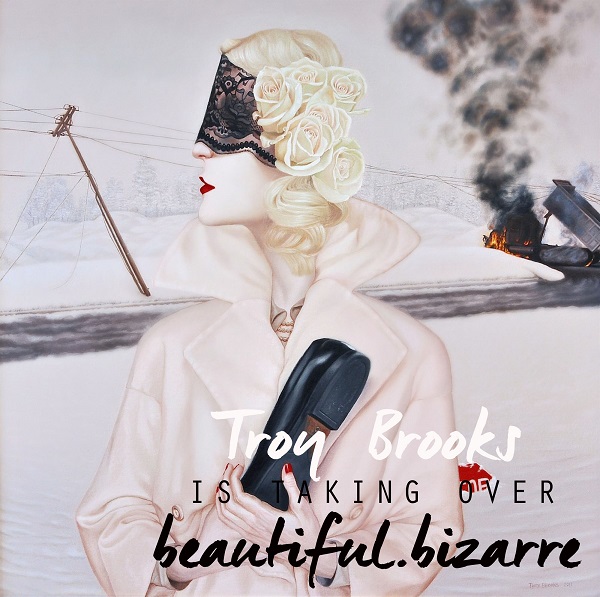 I’ve made a conscious choice here to only mention artists that are alive. I’ve a long list of favorite dead artists like everybody else, but I’d rather use this forum to salute the ones still breathing. I’m kinda loving how much this feels like playing my favorite records with you guys. I have to start with probably one of my all-time favorite painters, Lisa Yuskavage. Looking at her lush oil on canvas work is like drinking freshly squeezed mango juice in the sun-room of the playboy mansion. Her stuff reminds me of those fantastic Eldon Dedini erotic cartoons from adult magazine in the 60’s, but with some serious painterly chops. This lady has a confident stroke. I’m always absorbed by the sense of light in her work, which is an element that I’ve come to realize is the real romance of painting in any style. If you can capture light in some way you’ll pretty much give any piece it’s own unique magic. I love the humor in these full-bodied women that Yuskavage paints. They remind me of an overflowing bowl of ripe fruit. 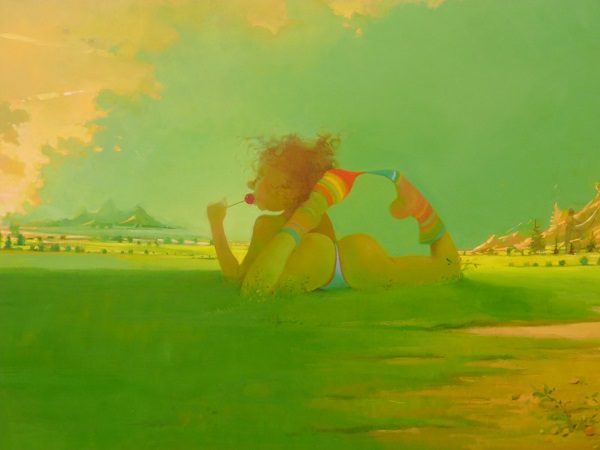 Detail of ‘Triptych’ Oil on Linen

I’ve been in love with Johnson Tsang ever since I first saw his brilliant sculpture of a gang of pissed off babies attacking a jug of milk. I think there’s no limit to this guy’s imagination. That level of technical skill, together with the ingenious concepts he’s able to come up with is a rare combination. His pieces are truly mind bending. He is that rare breed of artist who has carved out his own brand of surrealism. I literally can’t pick a favorite, but Big Fish is somewhere in the top ten. The way he renders splattering liquids is sort of magical. 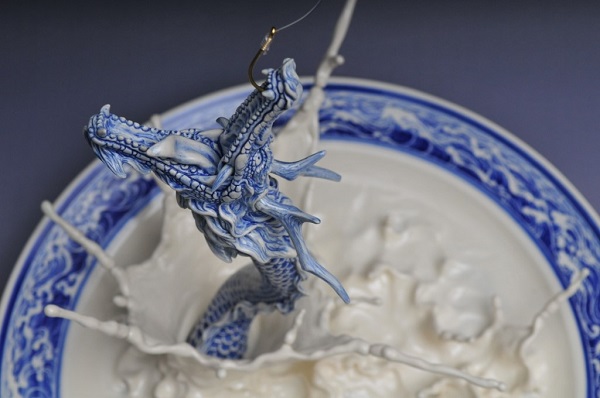 Here’s a case where an artist’s name is as epic and beautiful as his work is. Barnaby Whitfield is my favorite kind of surrealist. Completely irreverent, with a wicked sense of humor. You really can’t compare him to anyone but there is a deeply subversive undertaste to his work that somehow reminds me of Mapplethorpe. Even though we have different styles, I can’t help but feel a special kind of kinship with Whitfield. I think there’s a chance someone scrambled babies at a hospital and we’re somehow related. His images is exquisitely warped. It’s amazing how much narrative he can balance in a single piece with his opulent color palette and mouthwatering, depraved visual vocabulary. It’s like stumbling into a morgue during an acid trip. He works in oil pastel on paper, a medium that is so satisfying when it’s done well, and which he has clearly mastered. Whitfield also creates beautiful minimalist face sketches with just a hint of color, some of his most commanding and evocative pieces. I’m always drawn to artists who have a way of walking that line between the beautiful and the grotesque. Looking at his self-portrait, “Splash” is like watching an opera at the Margravial Opera House and simultaneously hearing Jame Gumb screaming at me to “put the f*cking lotion in the basket”. 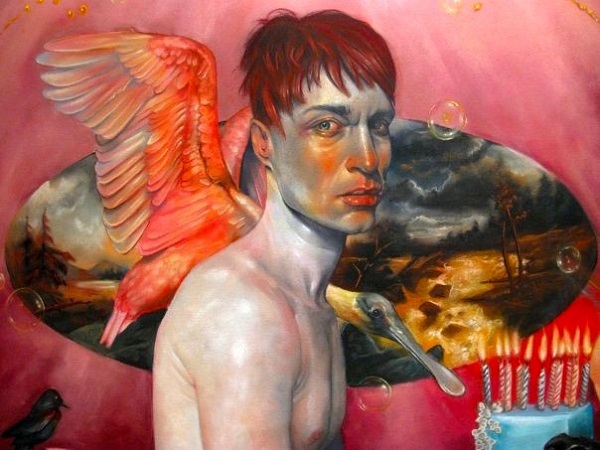 I just stare at this guy’s work in complete awe. Ferri is an Italian painter from Taranto and I’m convinced he is the true heir apparent to Caravaggio and Ingres. But even though he shares the same sorts of motifs and technical command as some of the most revered classical doyens of painting, there is something very modern in his narratives. I can’t speak for other artists but he’s one of those painters I can’t help but downright envy. There’s a stunning nineteenth century painting by Paul Delaroche called “The Execution of Lady Jane Grey” that is probably one of my all-time favorites. Ferri captures what I love about that image in every single piece I’ve ever seen from his extensive catalogue of work. The painting of his I’ve chosen to feature here is a perfect example of  his poetic use of light and shadow, illuminating scenes of gothic mythology. Seductive and arresting. There is true classical erudition going on in his work that makes me feel like a slobbering 4 year old playing with crayons. 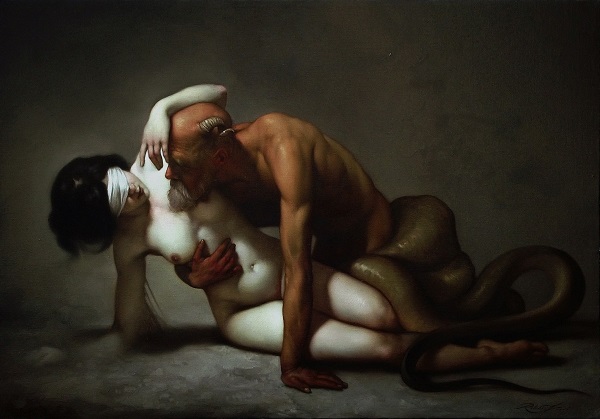 Gosia is a polish sculptress who’s work I discovered when I found myself using her studio for a photo session a few years ago. The waif-like figures she sculpts out of clay and various materials remind me of classical Japanese dancers in repose. Haunting and elegant. Sometimes they are draped in floral patterns, encrusted with sea coral, or decaying like an ancient relic. This is work that stays with you. The piece I chose to feature here is one that I saw in L.A. at Corey Helford Gallery during my own show there recently. It’s called Beneath The Waves. It was standing on a small riser in the centre of this beautiful 5000 sq ft gallery and it completely filled the space. Before they opened the doors to the public, I just stood there gaping at it in silence for a good 5 minutes. The photos of her work are lovely but you get the full impact of these plaintive figures when you see them in person. There is a profoundly moving presence to them. 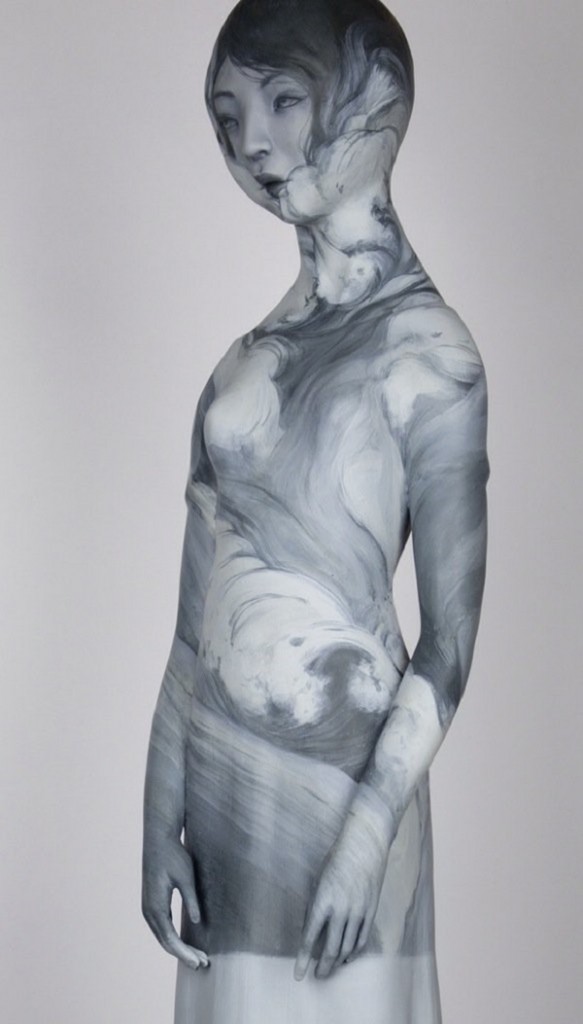 In 2014 I had a couple of pieces in a group show at Jonathan LeVine Gallery in New York and there was a small painting directly across from my work that I couldn’t take my eyes off of. It was a magisterial portrait of a disfigured face, painted in a style reminiscent of Jan van Eyck. It was repulsive and sort of took my breath away. His name seemed, appropriately, like a Dutch master from the 17th century. I started seeing his work everywhere and subsequently found out that the one I saw in New York was actually one of his more conservative pieces. I’m convinced he could paint snot on a paper plate and make it a masterpiece worthy of the Louvre. Besides this guy’s impressive chops, I think one of the reasons I’m so inspired by his work is that he’s an authentically independent visual thinker, with an almost maniacal attention to detail. I remember looking at the hair in one of his paintings and thinking he could probably pull a Rain Man if I spilled a box of straws on the floor. The piece I chose to showcase here is called Born Bad. You can’t NOT have a visceral response to this. It’s completely outrageous, hilarious, and of course, masterfully executed. Yes, that vomit is fabulous, but check out the highlights in the shaded area around the jawline. It glows. I’ll have nightmares, but they’ll be beautiful. 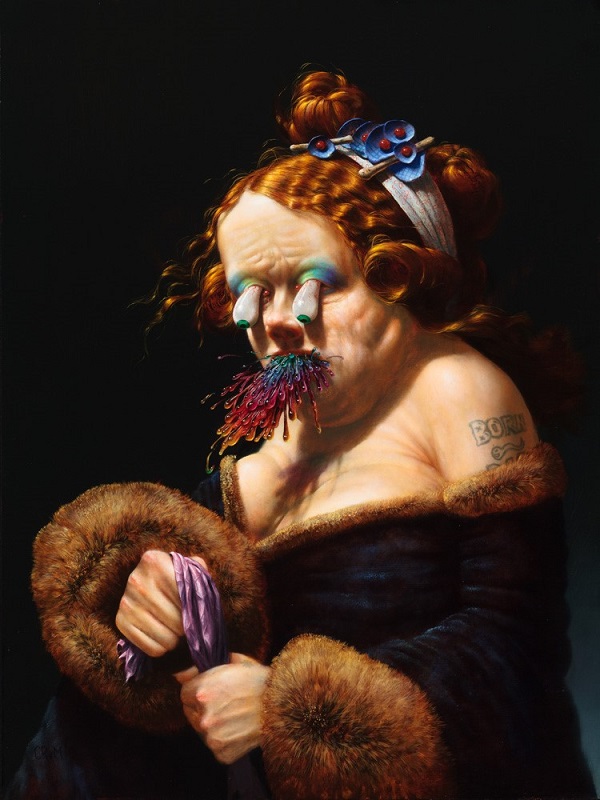 I could never hope to give Evan Penny justice by showing a picture of his work. Seeing this guy’s stuff in person is an experience. I remember catching a glimpse of one of his stretched out giant busts out of the corner of my eye while I was walking through the AGO in Toronto and the first thing I did was rub my eyes. I walked toward the entrance to his solo exhibition where this leviathan-sized silicone face of a man towered about 5 feet over me. If you think my faces are stretched out, this face looked like it had been the trailer coupler for a Mack Truck. I walked up to it and saw hundreds of tiny hairs coming out of the pores on that giant nose. I can’t remember what exhibit I was there to see that day. All I can recall is standing like a potted plant in every room of that Even Penny exhibition having my mind properly blown. 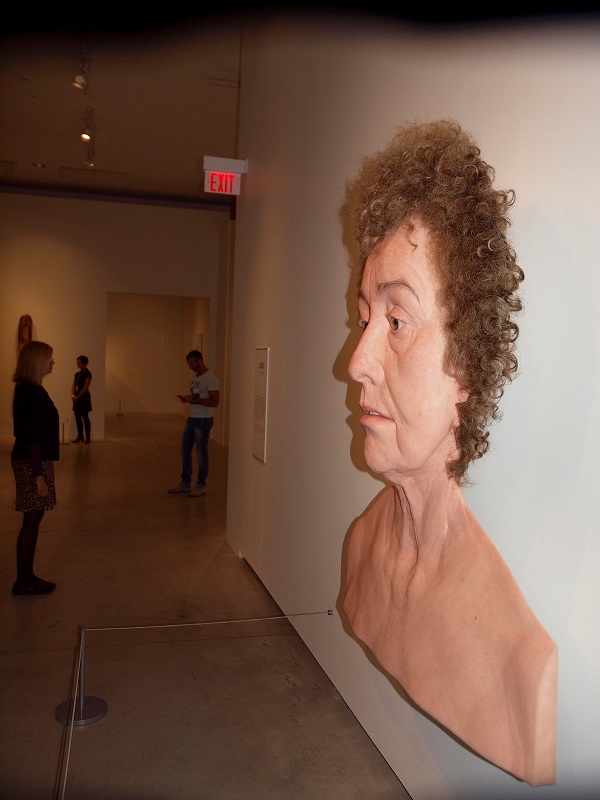 There is such a lyrical quality to Aron’s work. I can almost hear a Leonard Cohen song playing softly in the background of every piece. There is always a loaded undercurrent in his scenes, as if something dreadful has happened and the figures are wandering around in a state of shock. But even though there are peculiar details to whatever action is unfolding, he knows how to leave space for the viewer to move through the work and design their own narrative. I love these scenes of a woman in her nightgown creeping through the woods, carrying some sort of burden. He is a true master of creating atmosphere. 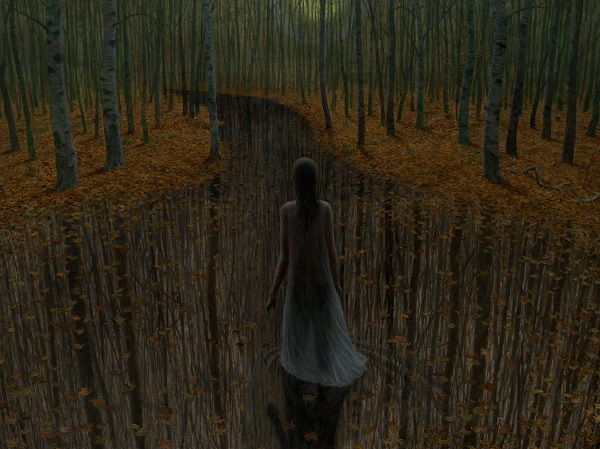 That was the final piece from Troy Brooks​! I truly loved the pieces that he selected for his TAKE OVER, we hope you enjoyed them as much as we did. Thank you so much Troy for taking the time to put together an incredible day.

Join us next month when Camilla d’Errico​ TAKES OVER our socials!