For many years, Krab Jab Studio has been a haven for an array of fantastical, realist, fine art and illustrative artists. 2016 saw the seeds of change begin to sprout, and the gallery saw an exciting expansion to welcome a new partnership with framing services Mainframe alongside an enriching mix of diverse exhibitions. Interestingly, it seems that owner and founder Julie Baroh doesn’t aim to stop there; alongside new, longer opening hours and extended exhibition dates, she has decided to celebrate Krab Jab Studio’s focus on the curation and development of their exhibitions by documenting them on their online blog. This year definitely brings forth a new stage in the evolution of Krab Jab Studio, and I for one can’t wait to see what flowers bloom in the process.

Their first show of 2017 draws our attention right into the heart of ethereal realism. Featuring Carrie Ann Baade, Liba W Stambollion and Patrick McGrath Muñiz, “Angels, Totems, and Revelations” celebrates elements of Baroque, Renaissance and 13th and 14th century paintings whilst effectively putting across each artist’s own statement and personality. Patrick McGrath Muñiz’s satirical social commentaries and anachronisms remind us of the mixed influences on modern day life, while Carrie Ann Baade focuses on specific moments in art history in order to recapture the ‘materiality’ of methods used, translating the angels of the past into her own visual language. Liba Stambollion’s unique gold leafed self-portraits unveil multiple introspective layers, opening our minds to the infinite ways in which we can see ourselves, and our possibilities. Together, these three artists are passionately leading the way for a beautifully provocative year at Krab Jab Studio in Seattle. 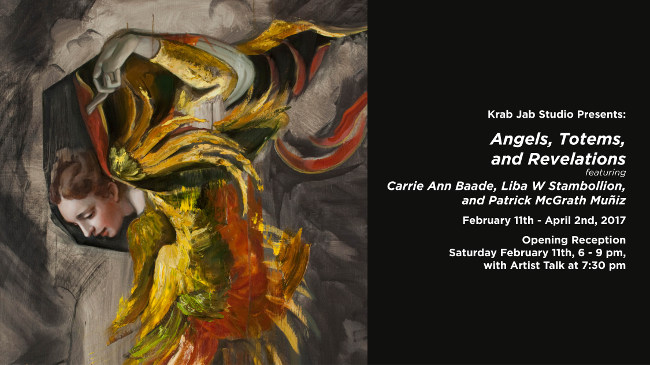 Known for her allegorical oil paintings, Carrie Ann Baade lives and works in Tallahassee as an Associate Professor of Painting and Drawing at Florida State University alongside her exhibitions. She shares some of her thoughts on her works within this exhibition: “When I started composing a series of angels, I sent the collages to my mother and she said, ‘Angels don’t look like that!’ I felt very strongly that angels could be made out of anything; and they didn’t have to be sweet faced, pretty, or gentle. Quite the contrary, they should be terrifying and frightening, but how does one paint that? The images I compose usually come from my mind’s eye and I don’t usually paint from dreams. However, “Seraphim” is from a dream encounter with a speaking, moving mass of fire that rolled out from its center and to the edges of its form. Later I would look up this highest rank of supernatural beings in the Bible and learn they were described as “wheels of fire” or sometimes interpreted as six-winged beings. While I felt like I had seen one for real, it didn’t make painting this easier.

I tried in my own language to equate its magnificence… The angels are part of a larger series of gods and apocalyptic themes I have attempted, which includes an interpretation of God if She was woman. “The Triumph of Divine Love: The Eternal Mother” depicts God passionately giving birth to her progeny with the earth as her womb. “Artemis the Creatrix” is a goddess of creation and inspiration who calls forth something from nothing and transforms it into matter. Lastly, “Angel at the End of Time” is a hopeful conclusion to this series. I would like there to be a heavenly force at the edge of destruction calling us back and retying the thread of life so that our narrative does not end.” 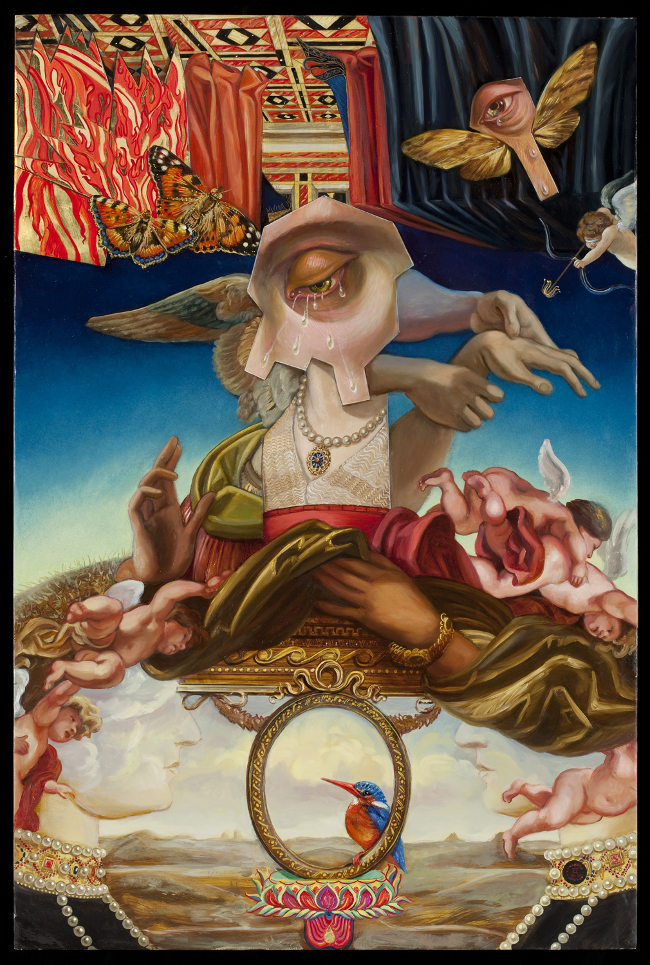 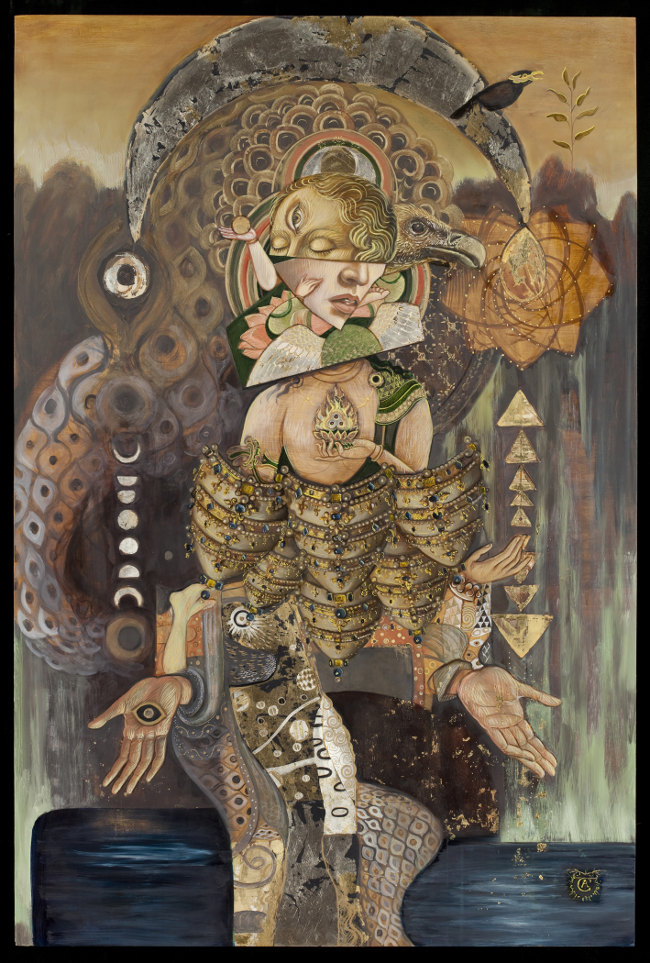 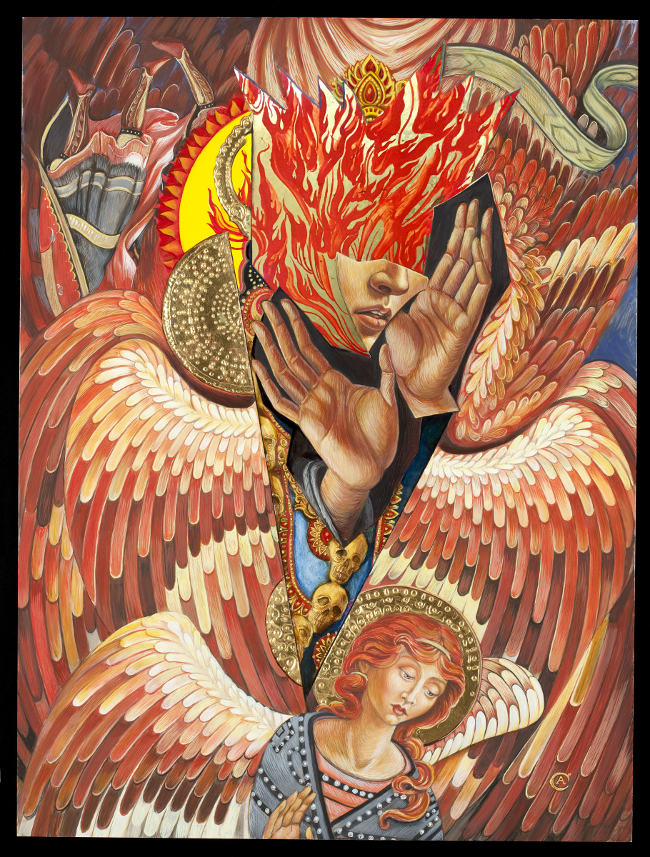 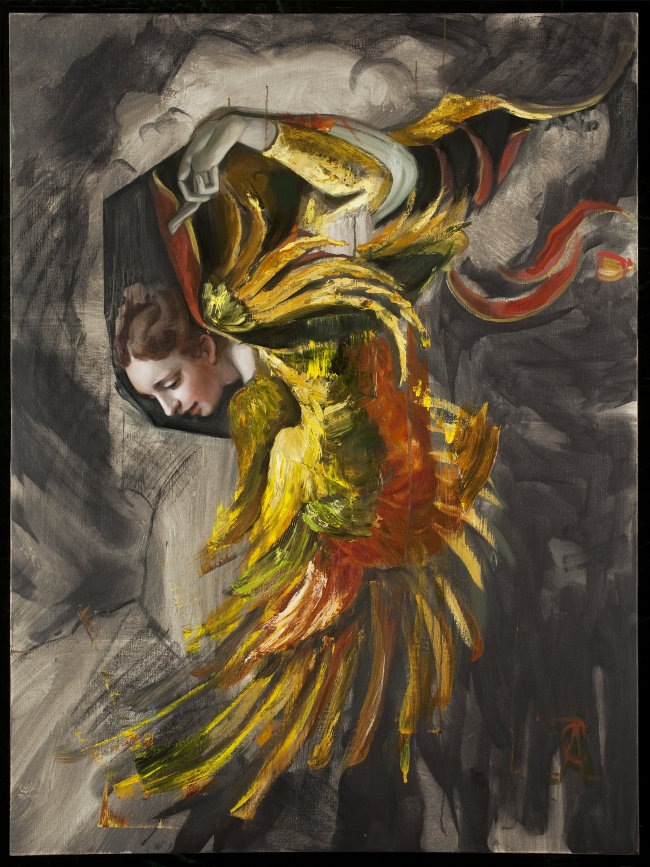 Angel at the End of Time

Multi-medium creator Liba Waring Stambollion combines cultural influences from around the world, from her childhood years growing up in South East Asia to her years in the USA as a teenager, before finally settling in Paris, France, where she still lives today. Head of AOI Europe (Art of Imagination – founded in 1961) Liba is a painter, writer and even furniture designer, with essences of ecology, erotica and the sacred continuing to recur as themes within her works.

Artist Statement for the show:

“Totem animals represent characteristics found in both the animal kingdom and human nature. They help us navigate, deal with and resolve the challenges of life. They can also help us reach higher levels of consciousness by opening doors in our psyche. Over the years, I have had animals and their particular medicine come to me in dreams, visions and situations in real life.

This series of self-portraits with my totems honors these diverse energies. The process of painting them lead to a profound meditation of each of them, bringing them closer to me than ever. Besides the deeply personal nature of this series, I hope to also bring delight and respect for our furry, feathered and finned cousins. In a time of mass extinctions, this series expresses a reverence for the common nature we hold with the animal kingdom.” 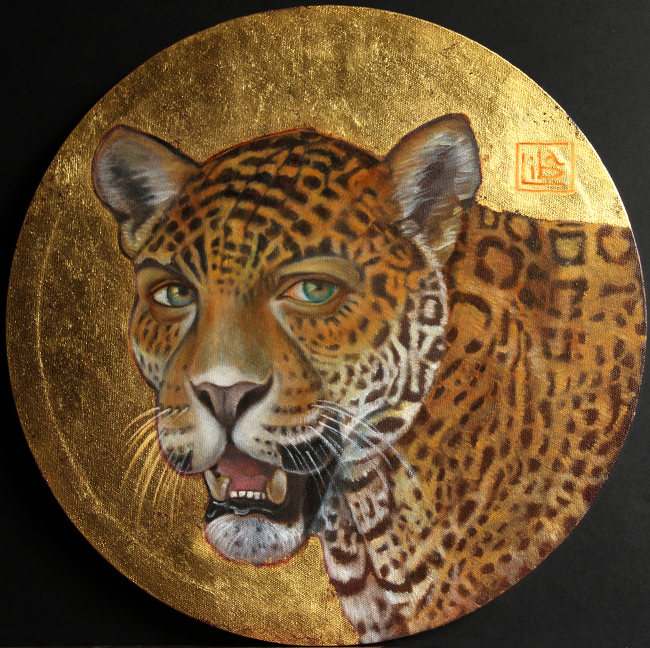 Self Portrait with Jaguar 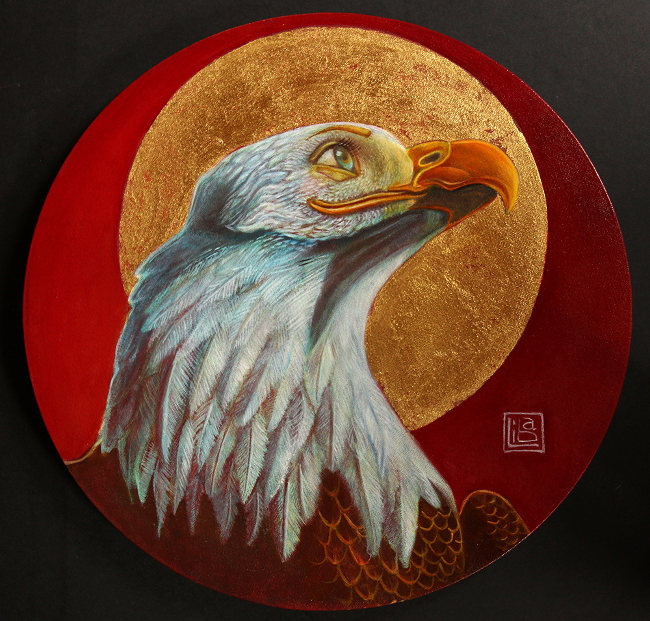 Self Portrait with Eagle 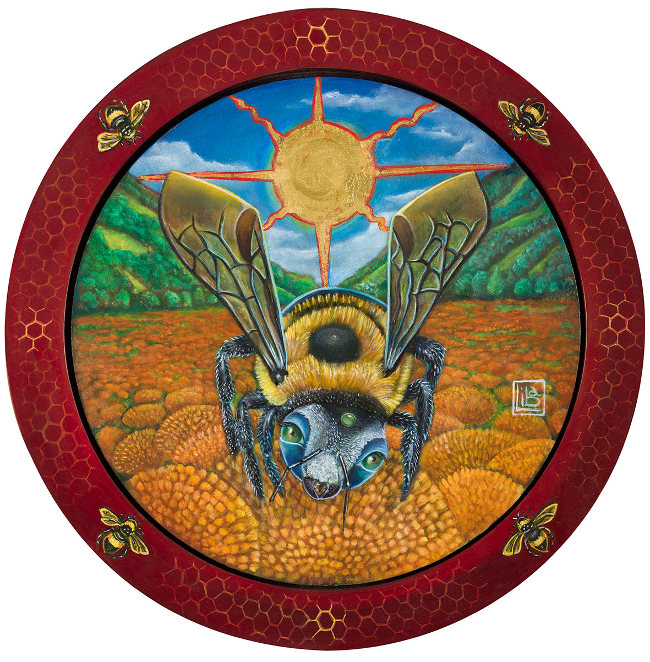 Self Portrait with Bee

Self Portrait with Heron

The works of Patrick McGrath Muñiz have shown around the world, bringing together elements of the Pop Culture, Christian Iconography and World Mythology that surrounded him on the island of Puerto Rico where he grew up. “My work responds to our consumerist society and its indifference to ecological and social injustices by tracing its origins to the time of Columbus. Adopting painting techniques on canvas and retablos reminiscent of Spanish colonial art enables me to emulate earlier indoctrination strategies and devices from the time of the conquest of the Americas. This in turn provides historical continuity between the Colonial and the Neo-colonial narratives present in the Anthropocene, an epoch defined by the enormous impact of human activities on the Earth’s ecosystems. The Neo-colonial narrative is defined by the neo-liberal rule of powerful transnational corporations and the spread of their doctrines of greed and consumerism through mainstream mass media. With my work I question how these doctrines have modified our attitudes and appreciation towards nature, spirituality, culture, history and ourselves.” 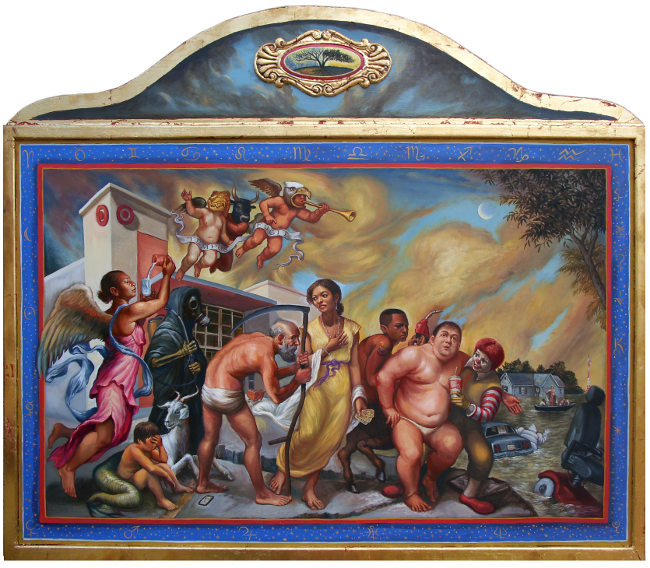 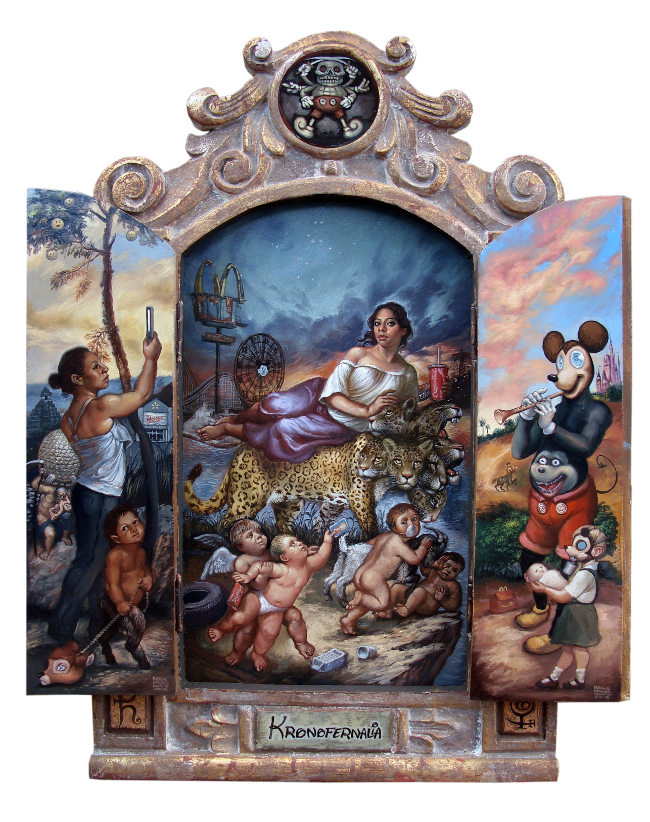 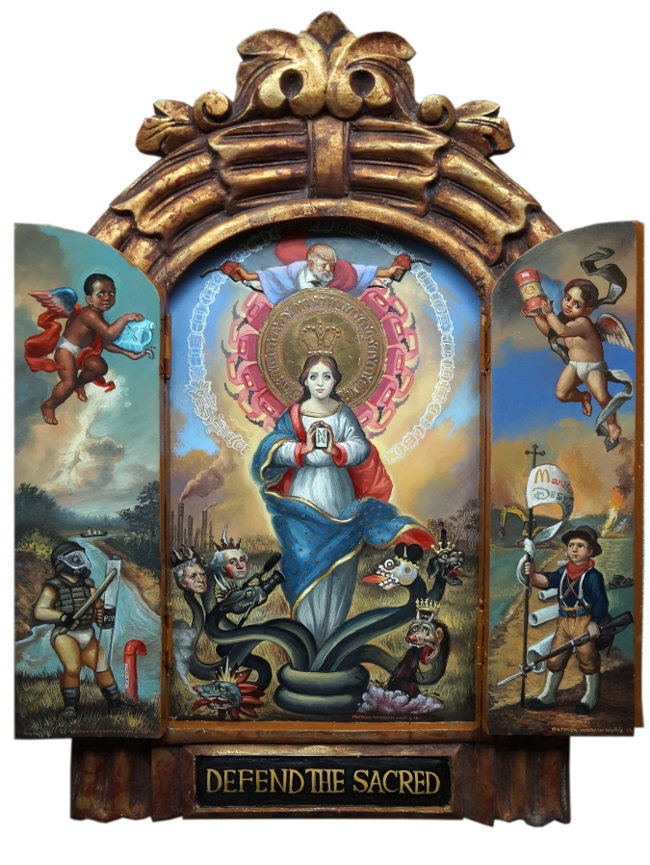 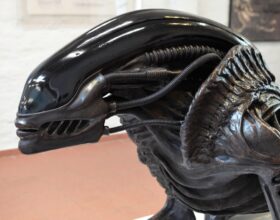 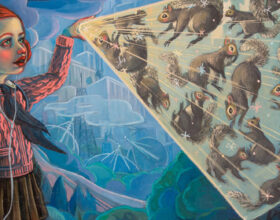