A culture echoes with the voice of the land. The terrestrial sphere that allows them to flourish and roam free among wild horses, open plains, and diaphanous mountain springs thrives under a sky brimming with the glow of a million constellations. One can hardly separate Native American aesthetics from secret forest whispers and whims, myths of tenacious guardian beasts, and feathers flowing in the wind. It’s easy to romanticize their culture. We like to imagine a people that so assiduously belonged to the earth that they still prosper in the same ancient ways.

There are roughly 300 Native American reservations across the United States. My experience with them, in Arizona, is of a vast swatch of land dotted with glittering casinos, cacti, and cookie cutter adobe houses.  Rusted cars, fields of corn and cotton, and empty, burned out trailer shells covered in graffiti decorate the sides of roads amidst dust. Unfortunately, this is the scene for many Native Americans across the country. The harsh reality is that after centuries of enduring epidemic disease, warfare, violence, and cultural obliteration, tribes across North America face serious tribulations. High dropout rates, alcoholism, addiction, domestic abuse, and suicide, are all pervasive issues that many Native American’s are well acquainted with. This holds just as true for the students of the Wounded Knee District School of South Dakota. Patrick Sullivan, along with New York tattooists Dave C. Wallin and Betty Rose, have come up with a way to support these kids in the best way they know how: through art and community. 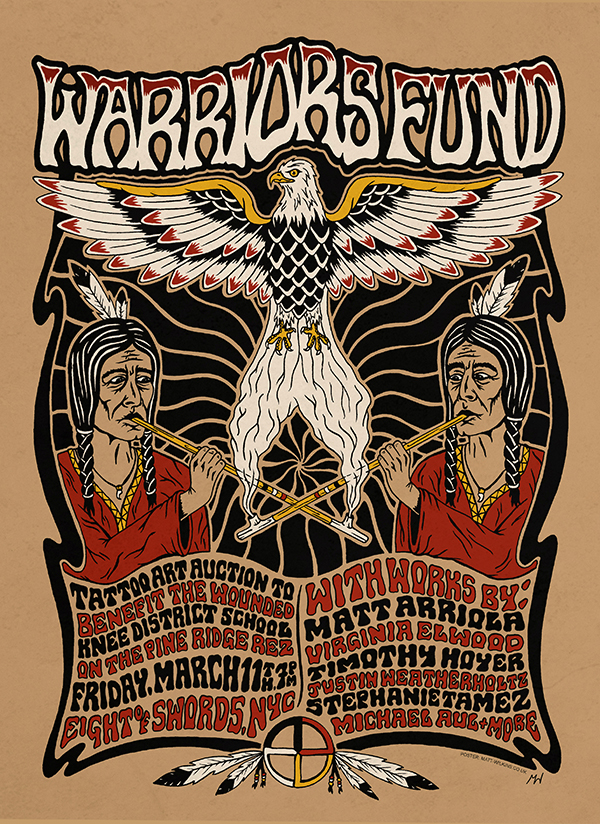 Justine: When did the idea hit you first? Why Wounded Knee District School?

Pat Sullivan:  The last few years, I’ve just been reading a bunch of books…reading up on the American Indian movement, and guys like Rus Means and Dennis Banks. A lot of stuff seemed to sort of focus around Pine Ridge and how it was a big jumping off point for the protests going on in the ’70’s, such as the Wounded Knee Occupation of ’73 on the Wounded Knee Massacre site. So just reading about all that stuff I felt I had to do something. So, I got in touch with a woman that runs Friends of Pine Ridge, and she put me in touch with Alice Phelps who’s the principle of WKDS and she told me they really need food. Afterwards, I talked to Dave Wallin, who is a good friend of mine, and I said, “What if we did an art show, we sold the paintings, and then sent all the money to the school.” And Dave was just like, “Yeah, totally. Let’s do it.” So, Betty and Dave gave me the go ahead and I got in touch with Scott Sylvia, Justin Weatherholtz, and Matt Arriola, and they were like ‘the names’, so with them I could get other extremely talented tattooist to jump on right away. 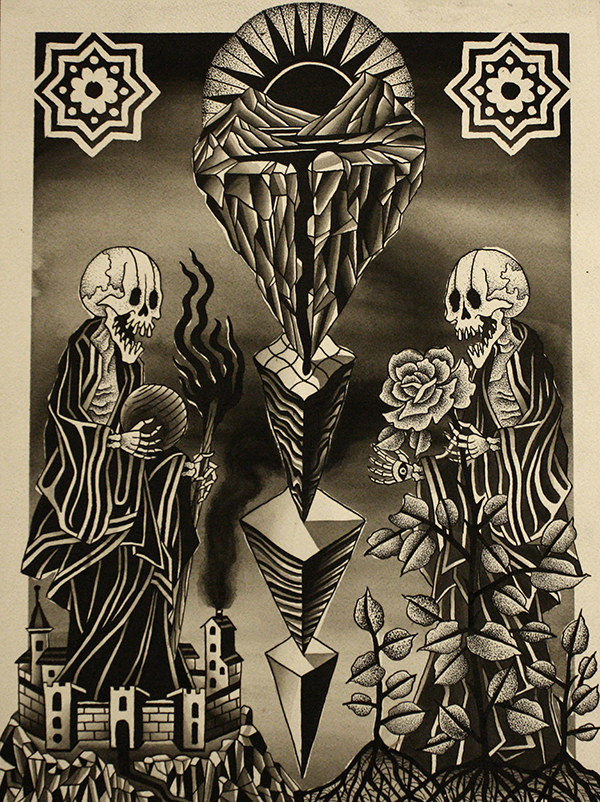 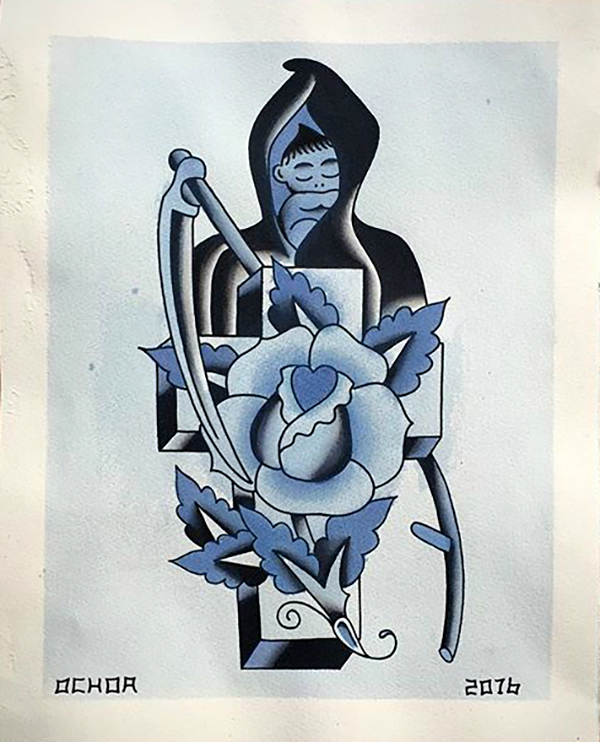 Were you surprised by the turn out last year and how positively the Brooklyn community responded to the fund?

Before it happened, I was thinking, man, I really hope that people show up to this fuckin thing, and they did! We raised ten grand, and it was totally packed and kinda nuts, but it all started because I wanted to do something, I didn’t know how to do something, and I pretty much just used the resources I had which were the really talented people I know and got them to sign up for this cause. 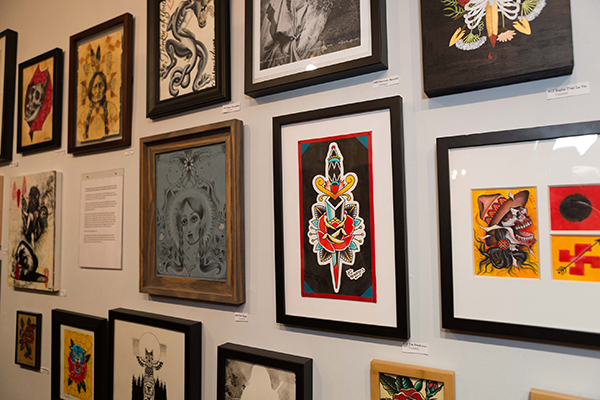 I read that most of the funds go towards food to help stave off hunger for these kids and their families, but that it also helps to provide suicide prevention training to the school counselors. How have the kids and the community of WKDS responded to the art and the support and do you feel that this fund helps provide not only monetary support, but emotional support as well?

This year Alice Phelps said to me, ‘We appreciate everything that you’ve done but I was wondering if we could use a portion of that money for counselor training and suicide prevention.’ And I was like, yeah! Absolutely! The school is K through 8th grade, and last year they had, like, a dozen suicides. So, I realized I had to do the show again. There’s no other choice. Last year Alice sent us these great photos of the kids holding up signs saying thank you, and that’s super cool, but honestly, I don’t expect or need thanks. I know that the money goes towards food and suicide prevention and that’s all I need. I hope it makes a difference. 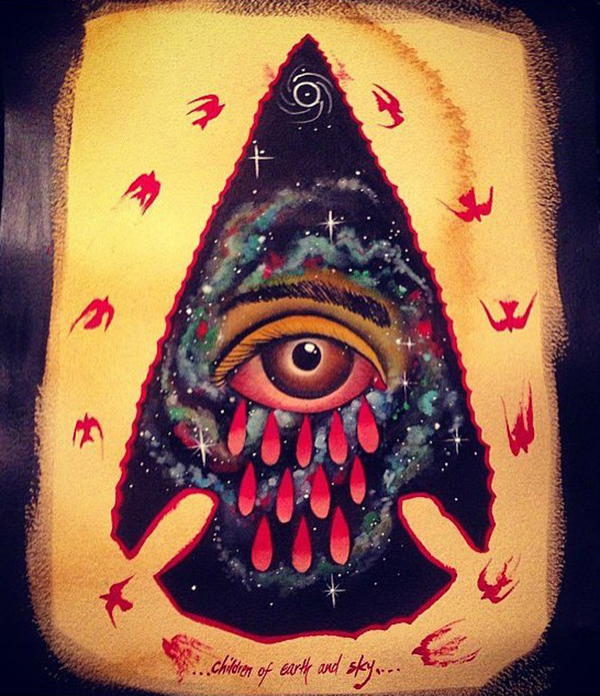 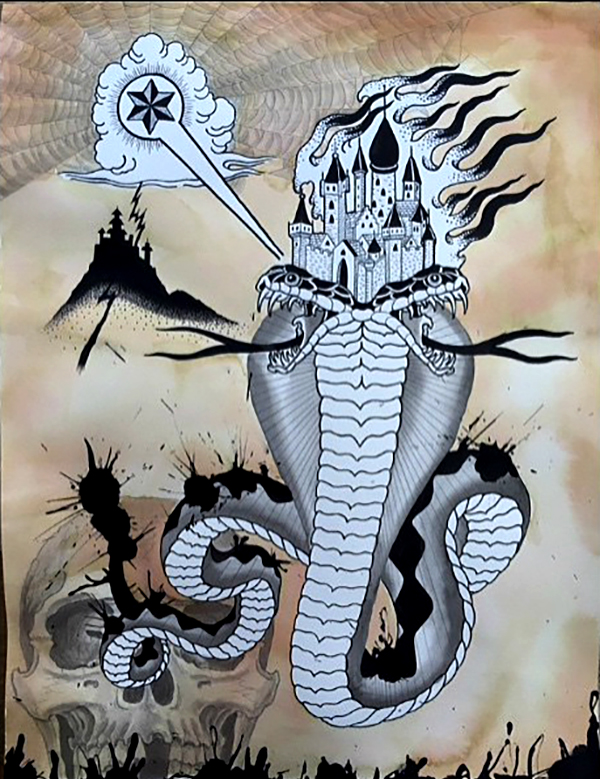 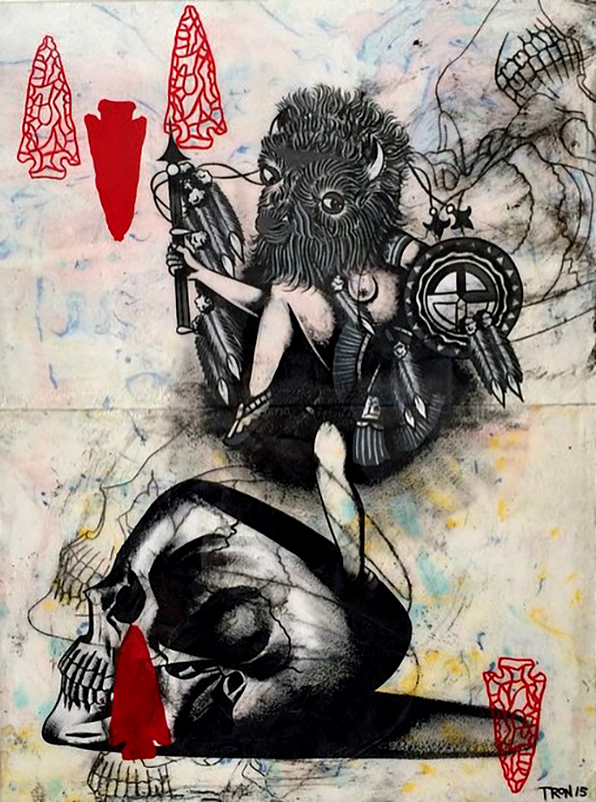 Tattoo art has become more popular with the public recently, perhaps in part to numerous reality TV shows, and social media apps like Instagram. How do you think this is effecting the tattoo art community, and do you think you would have had such a good turnout at an event like this, say, ten or twenty years ago?

Definitely not ten or twenty years ago. It would’ve been almost exclusively tattooers and their families coming to the show. And, I think it still would’ve been good, just much smaller. I imagine that many tattooers, these days, have to be more aware of how their art is perceived. I’ll give you a perfect example: Last year Matt Arriola did our t-shirt design. It was this awesome skull with a headdress design. In the original design he had used swastikas on the sides and when he sent me the line drawing at first, I was like that’s awesome! But…I don’t know about the swastikas. I talked to a bunch of people about it, and we all agreed every single tattoo artist would by the shit out of that shirt and they would wear it. But, you’ve got family members, kids, and people who we don’t have the time to explain the history of the swastika and how it pops up in every culture across the globe in history, including Native American symbolism. So, let’s think about everybody. These days, I imagine some tattoo artists need to be more sensitive to mainstream stuff. Tattooing has become more accessible, so it’s not a little family anymore, way more people are interested in it, so you have to consider their feelings. And that can be a lot to ask of artists, to edit and be mindful of something else other than the artwork, it’s really difficult. 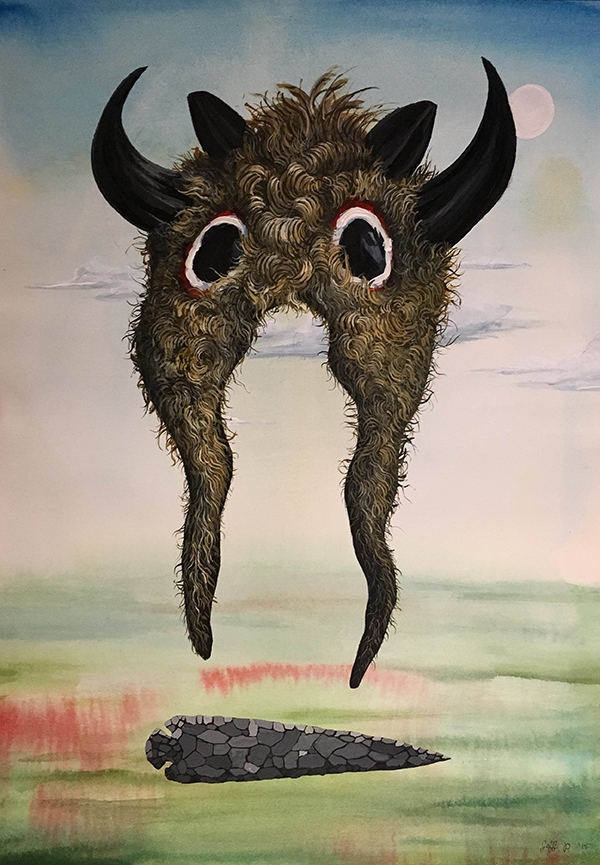 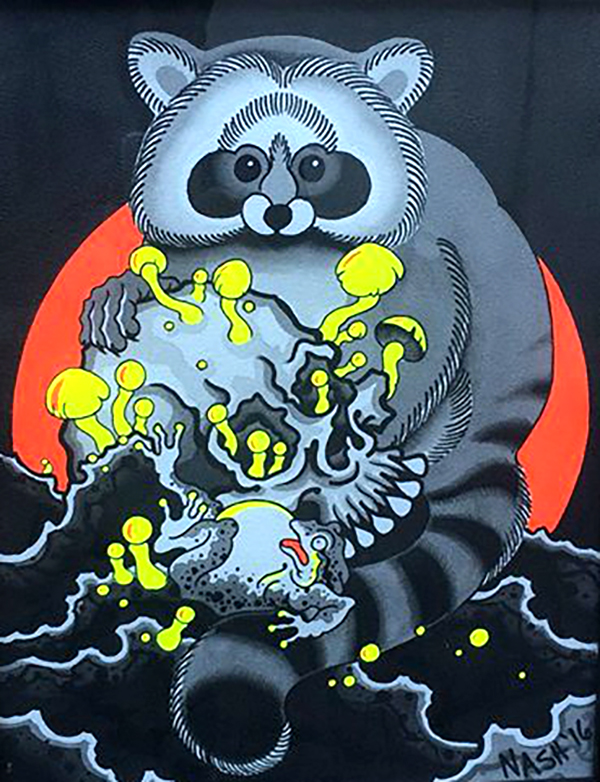 I read on the Eight of Swords WordPress that Wounded Knee skateboards will be part of this year’s show and I think it’s really interesting that subcultures, such as tattooing and skateboarding, that are really subversive at their core, are very often involved in supporting causes such as this. Why do you think that is?

Last year there was a couple, Kamie and Joel Hendricks, who run an organization called Rez Aid. They’re basically just an awesome punk rock couple who have a cool t-shirt business, and they do fundraisers, or do school supply drives. If I remember, Kamie grew up in that part of the world, and I don’t remember if it was Pine Ridge, but when they found out what we were doing, they got in touch right away. And they’re actually doing a show on the same night as this year’s Warriors Fund. Katie Fuller got me in touch with Jim Murphy, who is part of Wounded Knee Skateboards, and they just built a skate park for these kids.  So, totally independently, we’re all doing the same thing! It’s really cool and super weird. And I don’t know what the common thread is…it seems like, people want to do things and they’re going to do it. Do you have any theories? 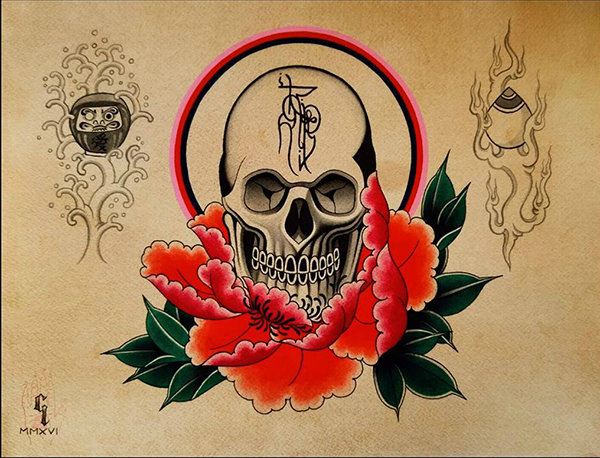 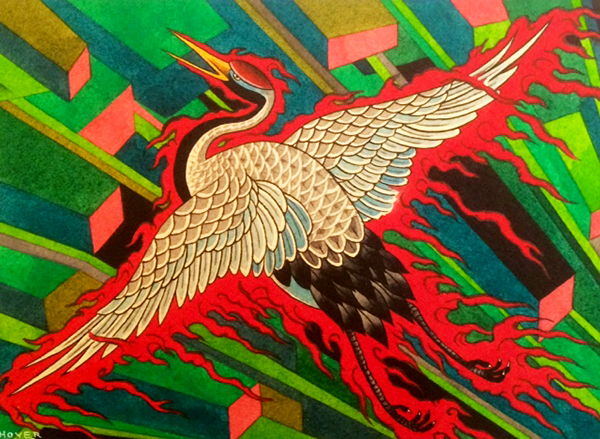 I think sometimes being part of an underground culture like tattooing or punk; you have more empathy for people. Because we’re so tattooed, or subversive, we get treated a certain way, so we empathize with others who are sometimes treated as lower than others too, or who have experienced hard times.

Yeah, and you know, skateboards, tattooers, punk kids, they all have a super tight community. When you hang out or work in a tattoo shop, it becomes a little family. You create this little world, and then you realize that there are other people out there who need help. Maybe your view is broader…there’s some sort of answer there wrapped up in community and just wanting to do good for other people. Everyone comes together, like Scott Boyer who runs Yellow Beak Press. They’ve put out a bunch of really phenomenal books and reprints of photos, and have generously donated some goodies this year for us to raffle off at the event. There’s also Katie Fuller, designer and owner of Palomino Jewelry, has added some of her pieces to the event as well. All the support is amazing.

Sort of on that same thread, what do you think is the best way to give these kids direction and hope for the future? Maybe it does have something to do with giving them a community?

Exactly. And coming up with this it’s not my place to go down there and take the lead. I’d rather give them the necessities, like food, so they can pay attention in school and achieve. 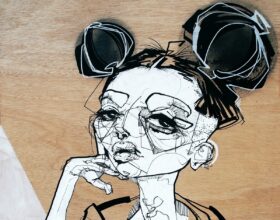 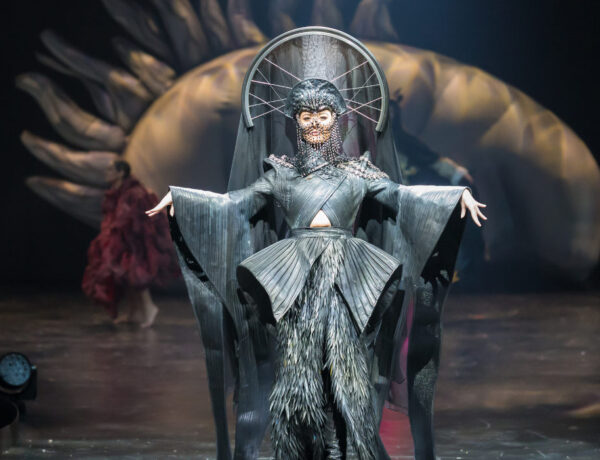 Entries Now Open for the 2023 World of WearableArt Awards Competition 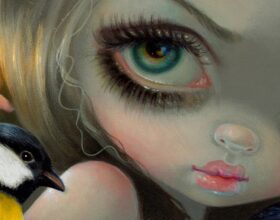 Erika Lizée “...and yet, things continue to unfold” @ 643 Project Space