If you found yourself wondering “where’s Waldo?”, you aren’t alone. Luke O’Sullivan’s vast cityscapes (silkscreen prints on wood) are filled with nooks and crannies just begging to be explored, each more eye-catching than the last.

Though at first glance his skylines appear to be normal, upon further inspection we begin to realize that these are not your typical buildings, and some of them couldn’t even exist at all. This combination of architectural oddities and impossible structures is a running theme throughout O’Sullivan’s work. On his website he describes his art as being inspired by dystopian and science fiction, which we can see elements of in his buildings, including his eclectic use of materials, heavy-industrial smokestacks, tower-esque buildings, and even that one building oozing sludge.  The experience doesn’t stop at surface level, either; a whole world continues on underground, where the new scenery is supported by a change of medium. Fine, detailed lines and huge buildings are replaced with a network of salvaged materials, including metal tubing, various wooden platforms and ladders, cords, wires and far tinier three dimensional structures, all which presumably keep these cities going.

This relationship between the world above and the world below (in a strictly physical sense) is also a major topic in O’Sullivan’s sculptures, perhaps harkening back to his dystopian and science fiction influences (the concept of multi-tiered cities). To quote an old Tom Waits song, there is, after all, “a world going on underground”.

Luke O’Sullivan received a BFA from The Art Institute of Boston in 2006, then went on to receive his MFA in Printmaking from the Rhode Island School of Design in 2009. He currently lives and works in Philadelphia, PA. His most recent work premiered in an exhibition this past August, titled “Cool Shelter”, at Paradigm Gallery + Studio in Philadelphia. For more general information regarding his work or how to acquire it, visit his website or Paradigm Gallery + Studio. 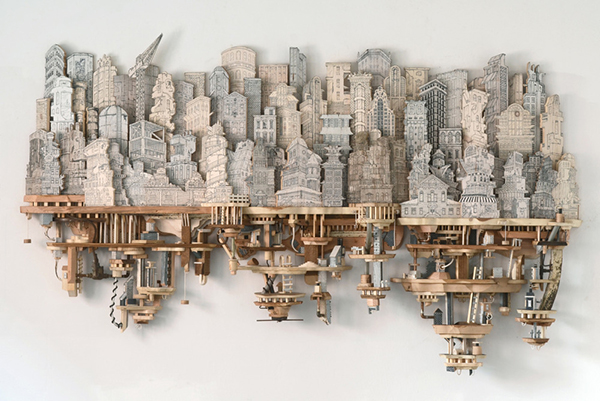 “Industry/Entropy” is Luke O’Sullivan’s first large-scale sculpture in this style to date. Begun in October 2011 and finished in January 2015, this piece took him approximately 3 and a 1/2 years to complete. To view blog postings and progress shots of this piece, visit O’Sullivan’s blog. 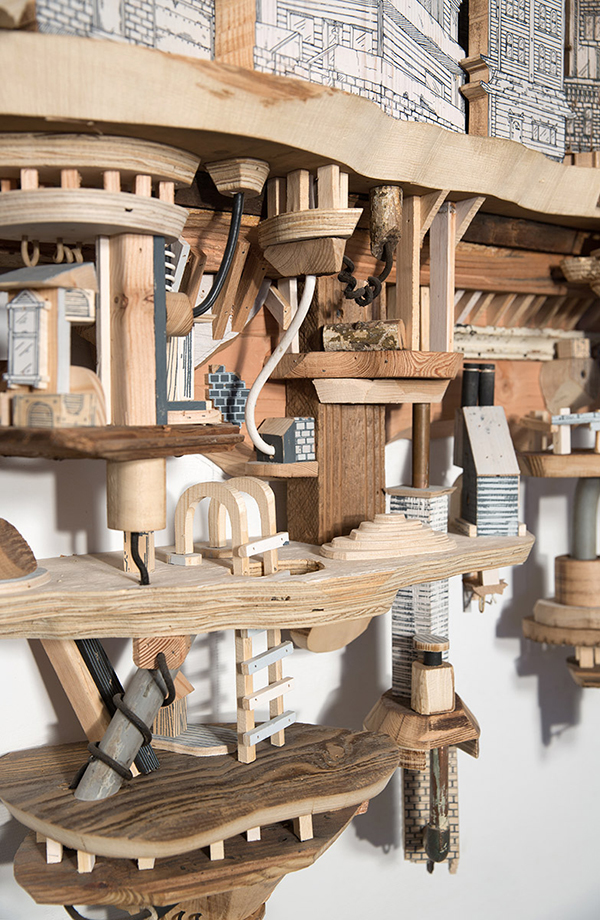 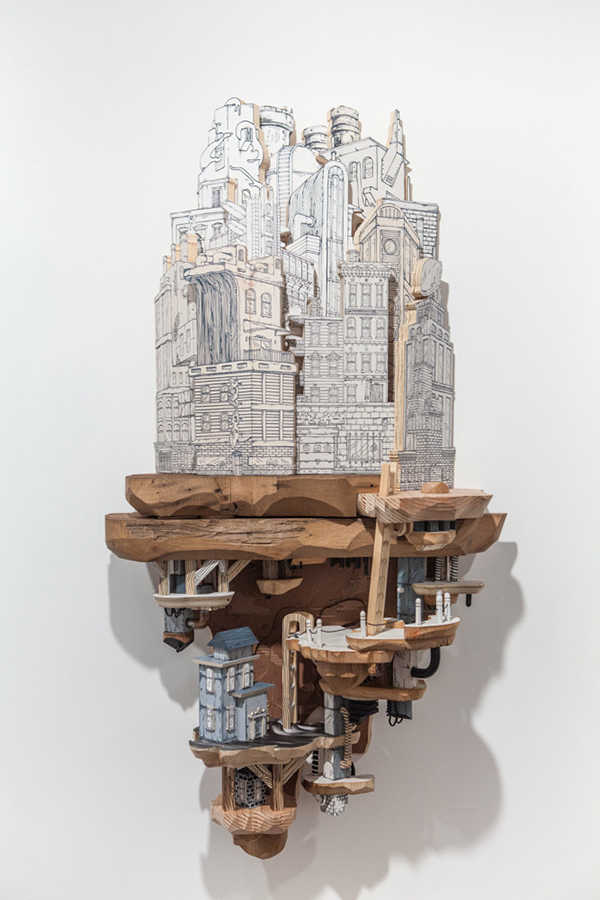 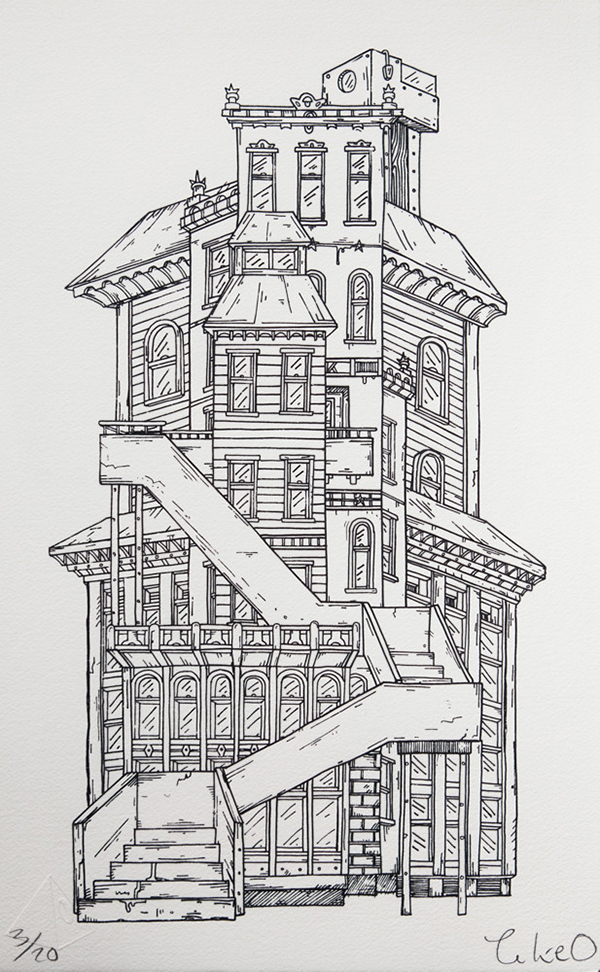 Alongside his sculptures, Luke O’Sullivan offers silkscreen prints of the original sketches for the buildings in his pieces.

“Earthboxes” is a slightly older project (2014) of O’Sullivan’s, though he is already beginning to explore architecture in print. He includes an “excavated” piece of earth beneath, perhaps foreshadowing of the underground aspects in his later pieces such as “Industry/Entropy”. 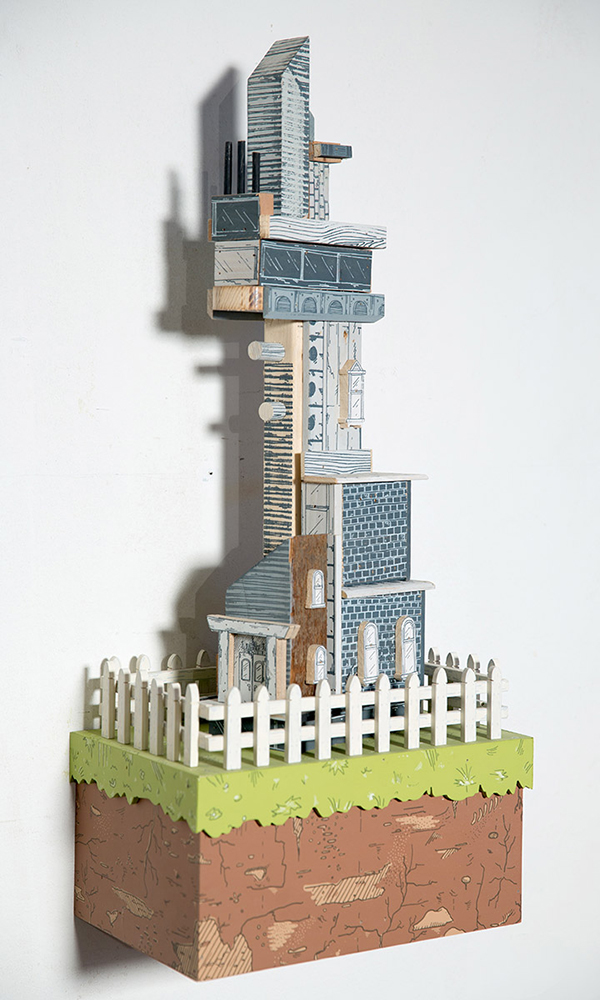 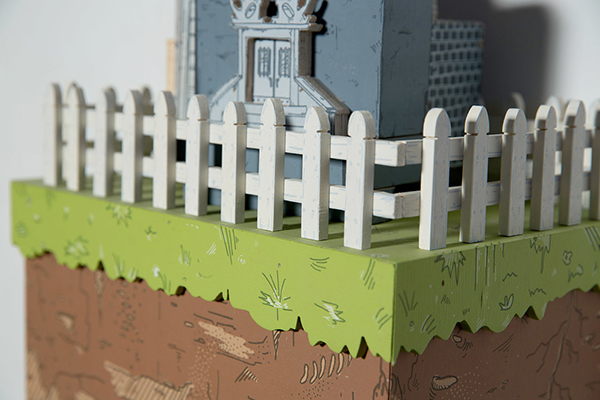 Soul & Joy in Every Toy: An Interview with RatBerry Toys