Mark Waldman’s sculptures and mixed media assemblages deliver direct, undiluted statements using powerful symbols such as hearts, hands, crosses and knives placed inside hand-weathered, handcrafted, and painted shadow boxes. Carefully positioned lettering spells out phrases with themes ranging from love, lust, and passion to loss, bitterness and hate. Mark’s Los Angeles punk culture upbringing as well as his love of straightforward, gut-punch artists fuels his conceptual visions, whereas his practical, on the job experience in woodworking, fiberglass and custom car building helps him see his artwork through to a solid, flawless completion. 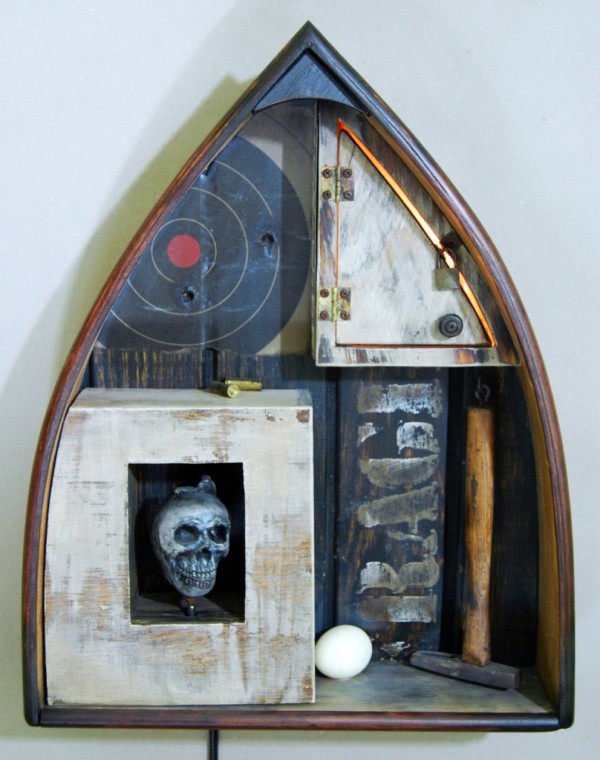 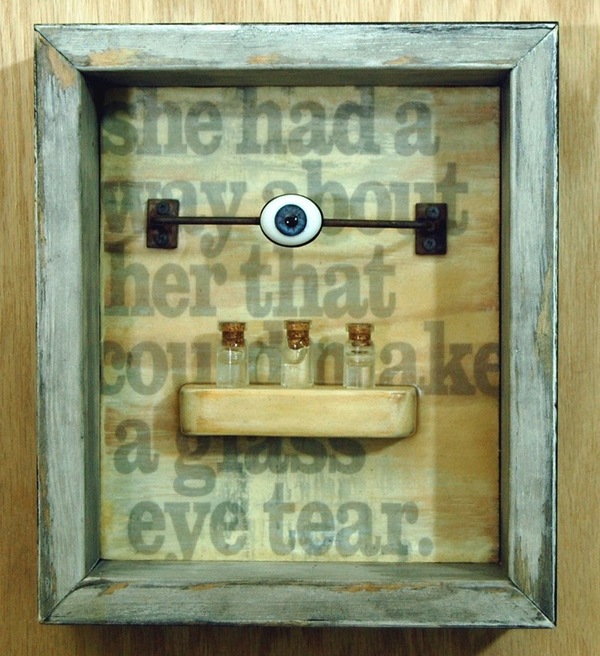 Assemblage is an art medium usually built on a found or constructed foundation, such as a cigar box, wooden tray, or handmade shadow box, that consists of three-dimensional elements projecting out of or from the foundation. Similar to its two-dimensional cousin the collage (and pronounced with the same “age” sound), assemblage typically uses found objects, but can include small sculptures or paintings within its composition. The medium’s popularity peaked in the ’60s and in 1961, the exhibition “The Art of Assemblage” was featured at the New York Museum of Modern Art. The exhibition showcased the work of early 20th-century European artists such as Marcel Duchamp, Picasso, and Kurt Schwitters alongside Americans Man Ray, Joseph Cornell, and Robert Rauschenberg. Mark Waldman’s work can be purchased through his website, sweatboxstudios.com.

Jennifer Jones: How did you get started making assemblage and mixed media art?

I think, like a lot of 3D artists, I was inspired by paintings/drawings, but just didn’t really feel connected to it. One night, around 1989 in the middle of the night, I stumbled (unfortunately literally) into a family friend’s studio. He had suffered a stroke years earlier and was working on a sculpture, but being only able to use one side of his body, I jumped in as his “other half.” I had roots at that point in the punk rock D.I.Y. movement and kind of knew my way around design… and enough about tools to be able to help. We worked and eventually showed together until his death a few years later. He had turned me on to the early 40’s-60’s sculptors, which included Edward Kienholz… from that point on, I believed assemblage was the tool that could achieve perfection in art. 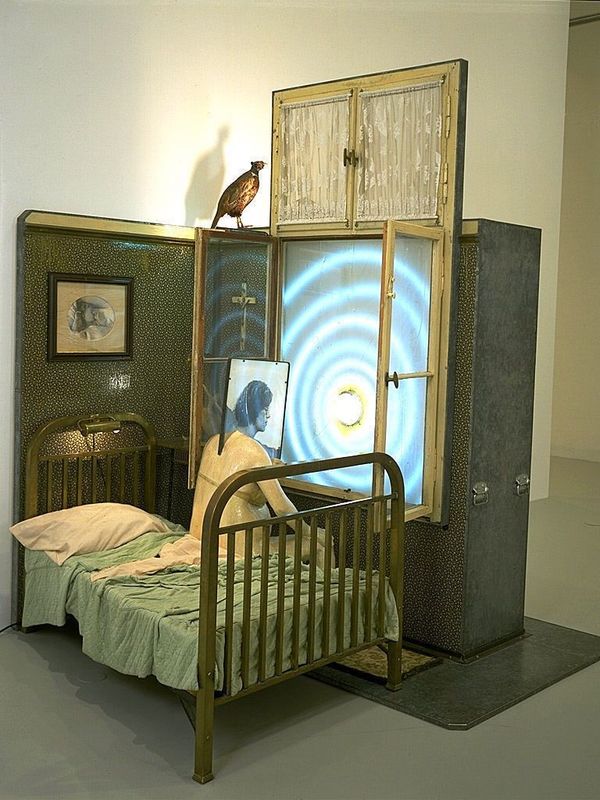 As a punk rock kid, how could you not relate to Kienholz? Kienholz’s work was in your face, unfiltered, delivered a knockout punch and never followed a movement or trend in the art world… I wanted to walk a parallel path.

How do your other hobbies and talents help you as an artist?

Definitely a direct connection… and to be honest, the biggest “game changer” in my career. The materials and methods I use are a direct reflection of my upbringing in southern California. My knowledge of metal work came from my years of building custom cars, resin/fiberglass work came from surfing, and woodwork came from skateboarding… having to learn those materials at that time, became permanent knowledge that transferred into the studio. I’m primarily self-taught & believe that the “hands on/on the job training” approach to learning those materials was hugely beneficial. 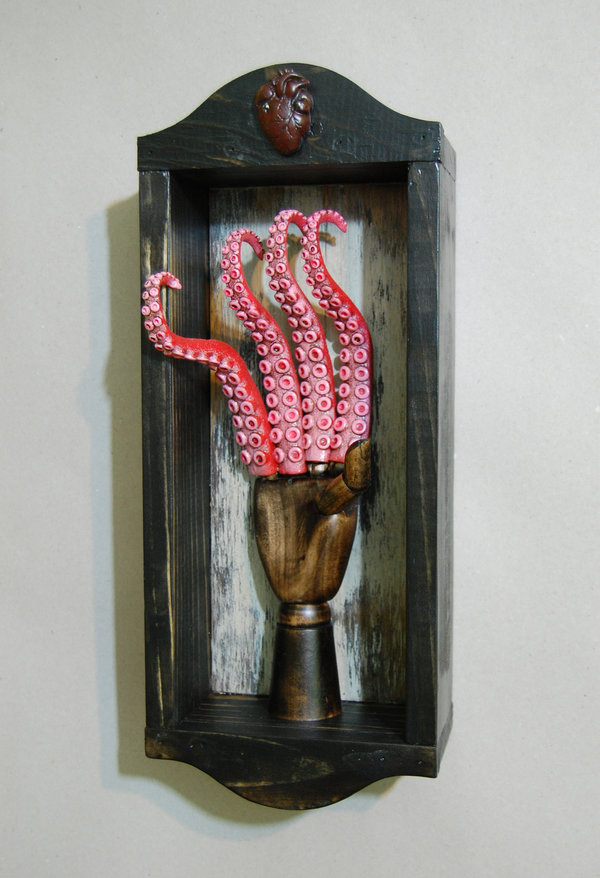 How is art therapeutic for you?

I started showing in 1991 and worked until 2002, when I got sober I stopped working for 10 years after that for fear that my skies didn’t have enough dark clouds in them to muster up the emotion needed. I quit teaching, got married and opened a gallery to show other artists in that time, but still kept my hands away from my own work. I had opened a second gallery in Japan, which would be hit by the tsunami/disaster of 2011, the gallery was unharmed, but it became obvious pretty quickly that my bank account would never be the same. The stresses of a failing business and raising two small children led to my divorce and the closing of a business that I had spent almost a decade building. All of a sudden, as if it had never been put on hiatus at all, the images of artwork started flowing back into my head… accompanied by the incredible desire to build them. I believe I was given the art back, as a way to stay focused… a release valve to deal with the pressures that come with being a sober, single father. 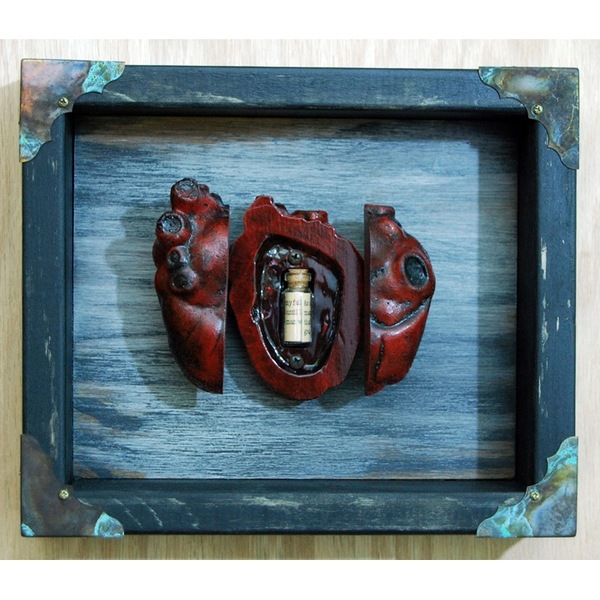 What is one of your favorite pieces you’ve done and why?

I recently finished a piece called “Maneater” that was a bit of a departure, much more to take in visually… rotating message, blinking lights, all while vending “take a number” tickets. as a fan of old carnival/circus decor, I really enjoyed the challenges of making it all jive together & feel that the challenge is what art making is about… the push. 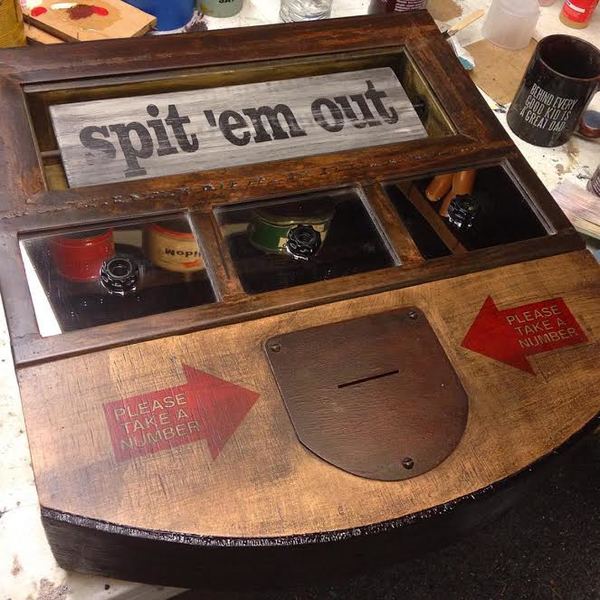 What message are you trying to convey with your art?

Up to this point, I’ve been a real fan of the 1-2 punch… with no real interest in the oversell. I’m just now experimenting with a multi-layered approach, multiple visuals & points to convey. I prefer a gritty approach of presenting what I believe to be an almost romantic message. I’m still a real fan of the Kienholz approach of hitting a viewer dead smack in the face & seeing if they stick around for more. I think most of the work is grown from personal feelings/beliefs that I’m dealing with at that time… feelings that seem universal enough to connect to others. 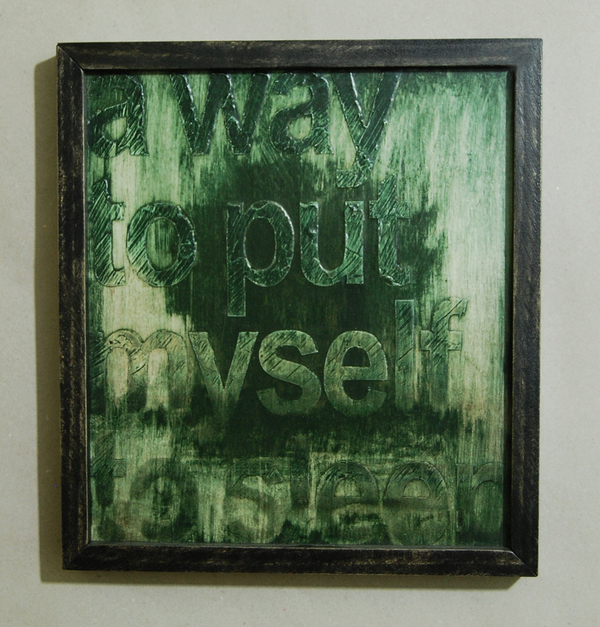 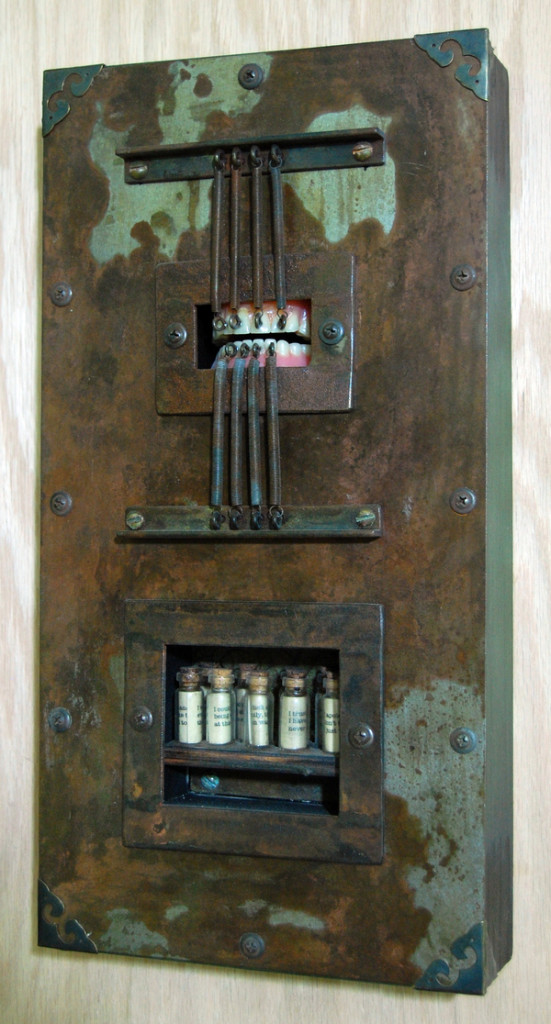 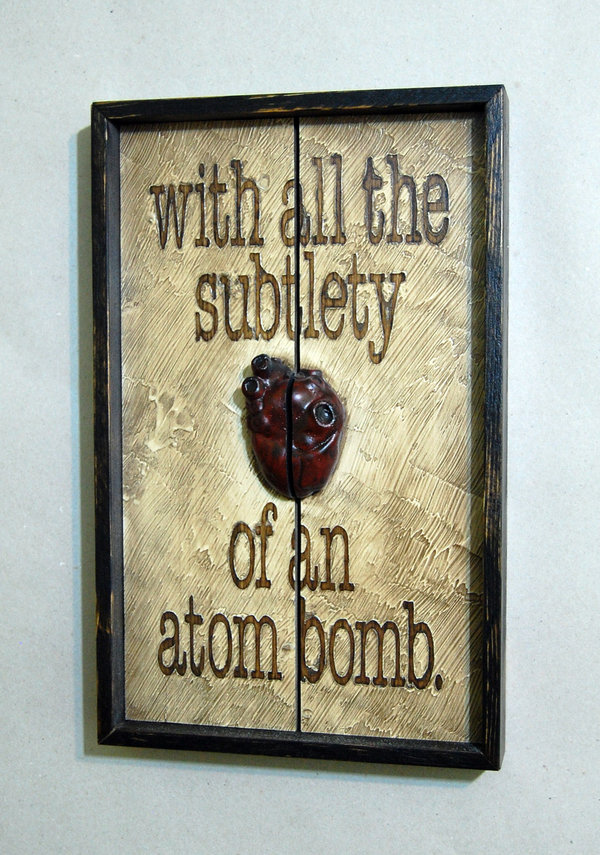 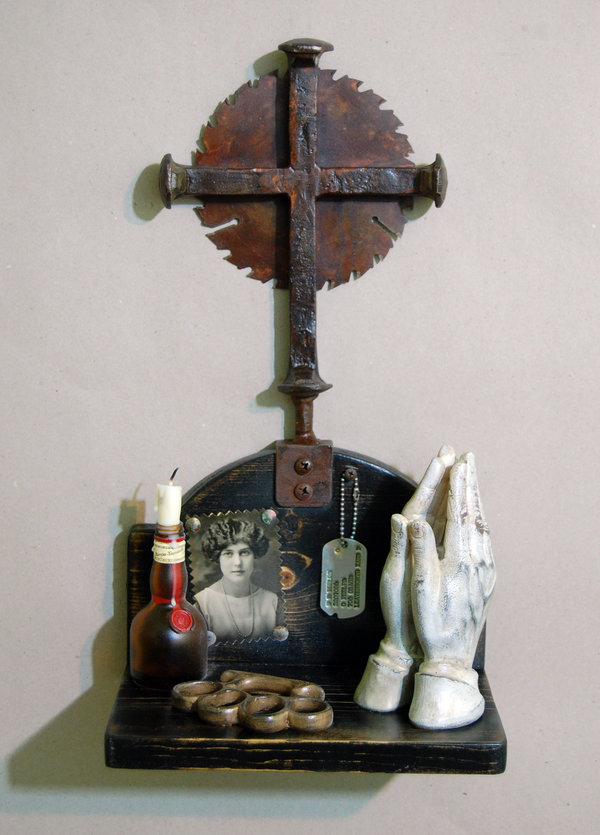 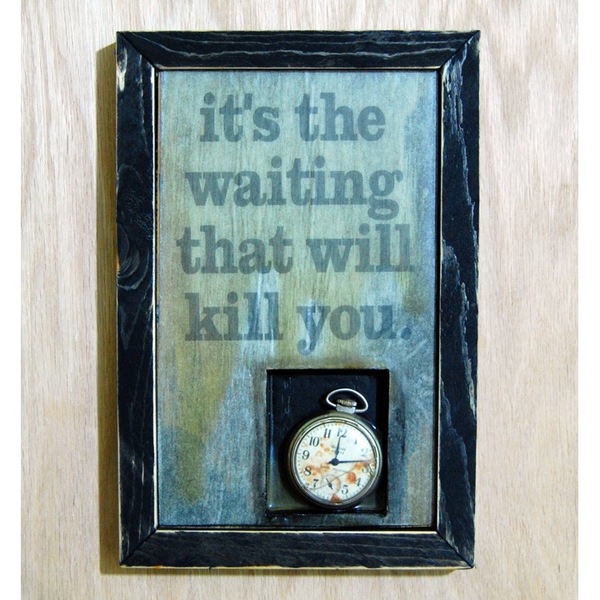 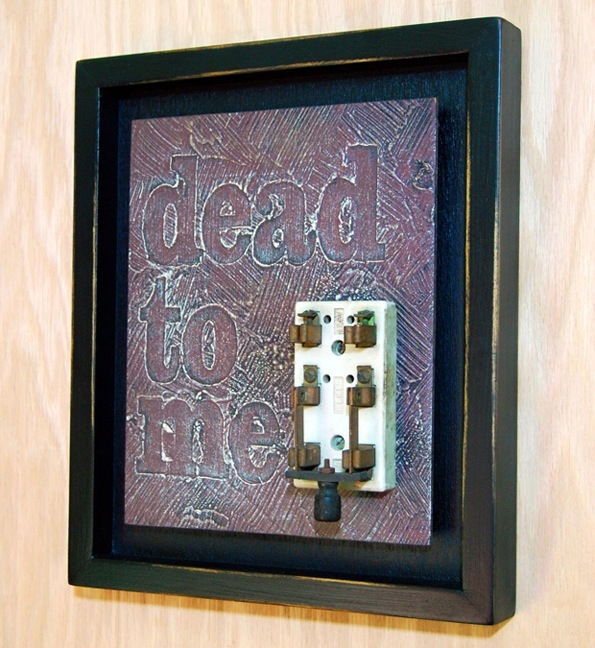 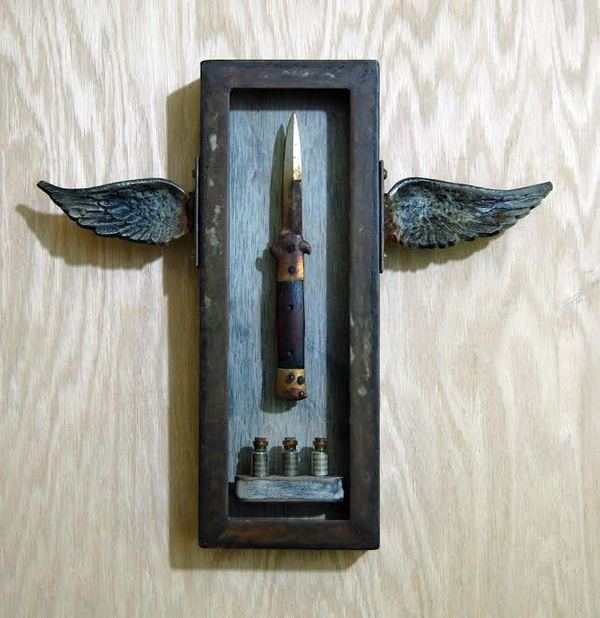 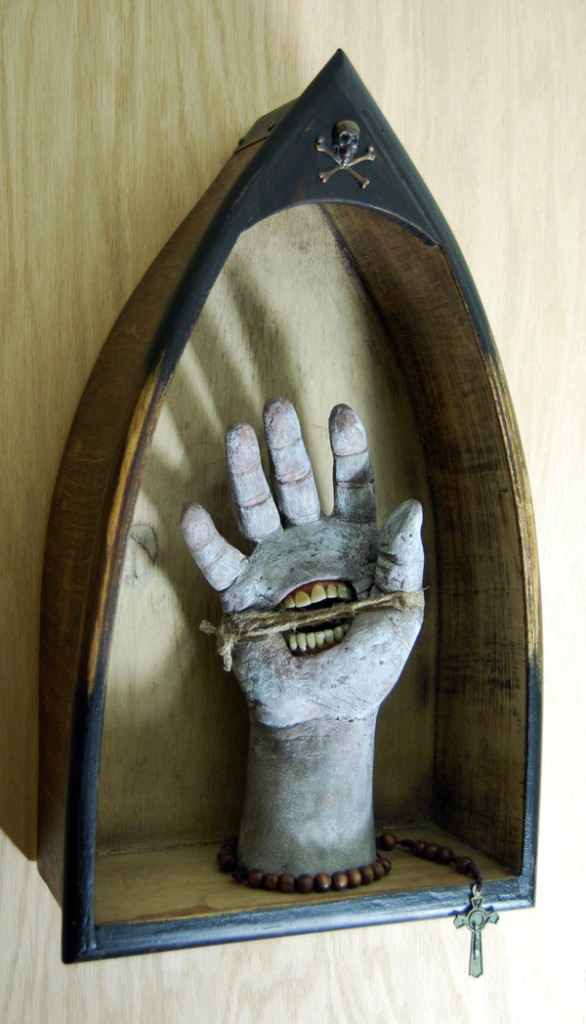 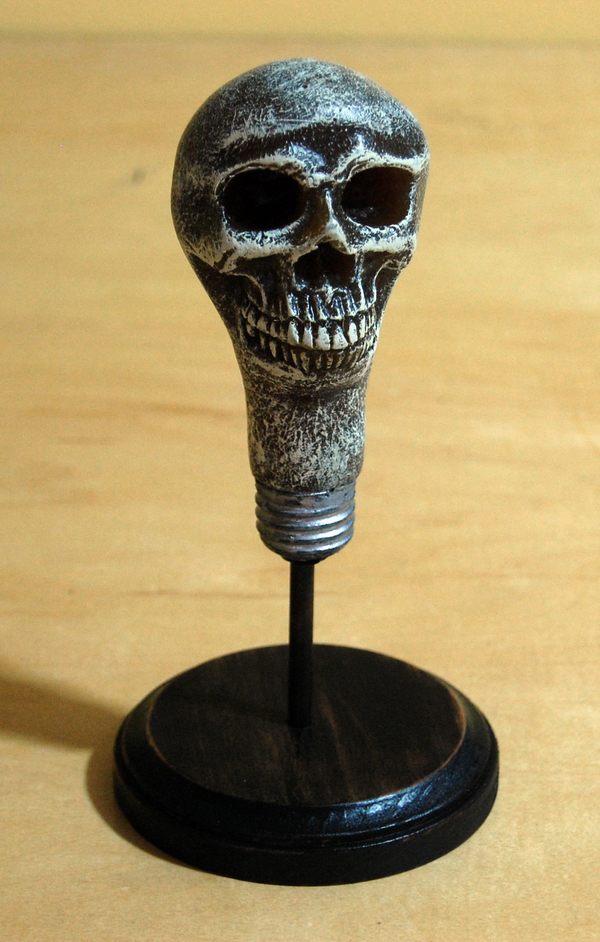 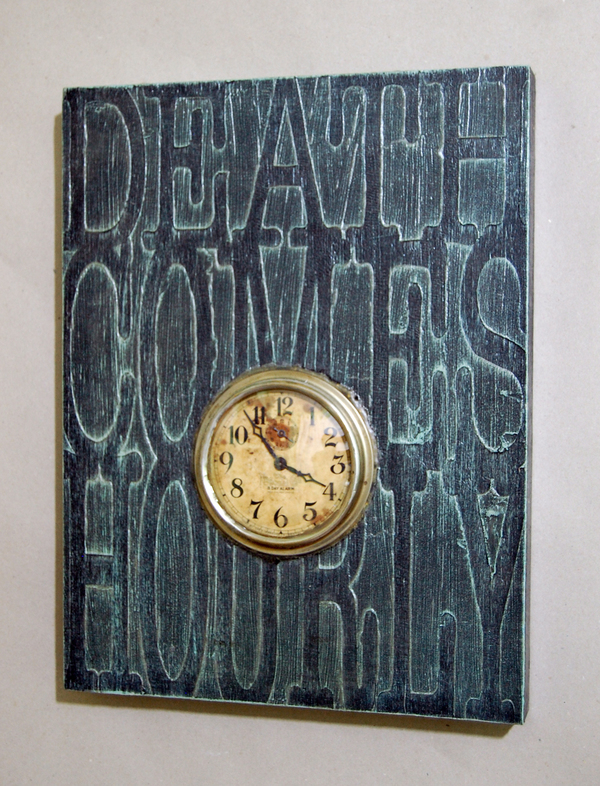 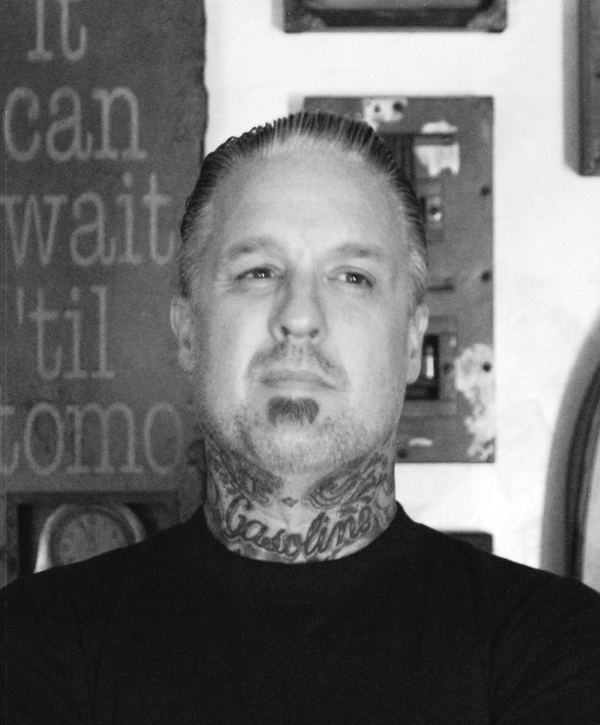 Mark Waldman in his studio 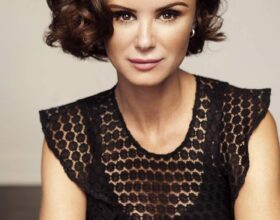 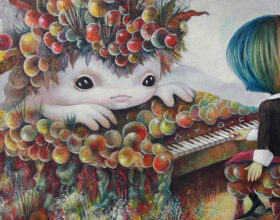 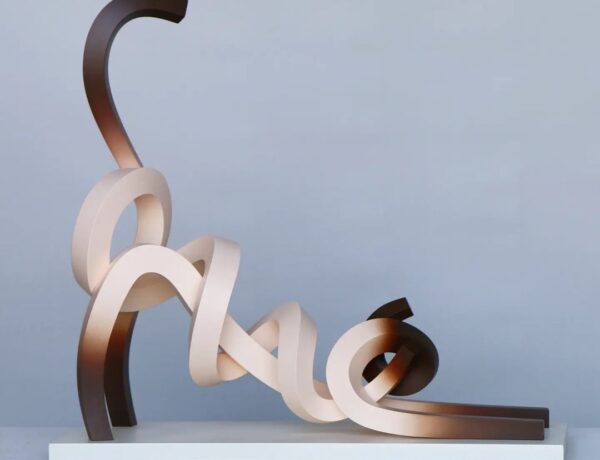 Open Call: The Jack of All Mediums