Four of Gallery Nucleus’ favorite artists, Amélie Fléchais, Nicole Gustafsson, Lorena Alvarez Gómez, and MALL, have collaborated to create a stunning collection of new originals that depict some of their fantastical characters exploring Mother Nature. This is an enchanting exhibit that promises to delight, spark curiosity, and draw the viewer in (magnifying glasses are provided in the gallery) to admire the impressive details showcased in these works. You’ll be left wondering what these creatures would say if they could talk in tiny pitches, squeak words in foreign tongues, and whisper in a volume barely louder than the breeze. The fantastical fauna are fierce with spirit, introspective, pensive, and cherubic, and all are in their very own way unbelievably charming and utterly unique.

In Amélie Fléchais’,  painting “Currant,” a seed pod hat with detailed shading applied in dainty parallel strokes sits umbrella-like on the wearer, dwarfing her waifish frame. Her elegant fingers cradle a fragile jelly-like creature born of what could be the union of pomegranate seed and frog spawn. In a work titled “Radish” a serious expression of mournful distaste is worn on the face of a girl resembling an innocent ghostly doll. Encircled by a gang of skull headed short-horned creatures, the girl is expertly painted, her hair like long icicles ready to clink together should the girl step toward who or what offended her.

Valiant in miniature, the heroine in “Dandelion” is about to embark on an important nocturnal journey confidently holding an erect, radiant flower aloft as her curious mount rears up ready to loyally support her conquest. Movement abounds in “Onion” as devoted rabbit servants head into the wind guarding their regal bulb-headed leader as seed pods swirl in a whirlwind around them. Flechais’s work conveys power in miniature: creatures small in size but mighty in spirit and devotion. The scenes are sneak peeks, moments captured by a glance through a magical hand lens. These are the folk we cannot see but know are there. 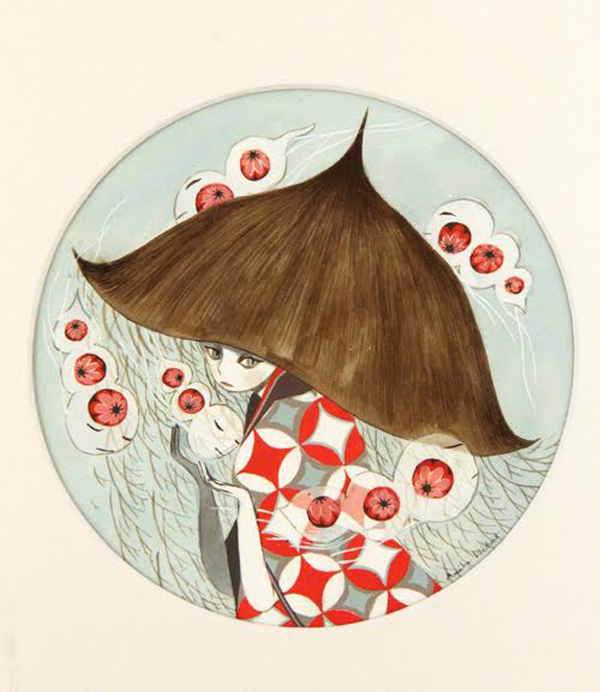 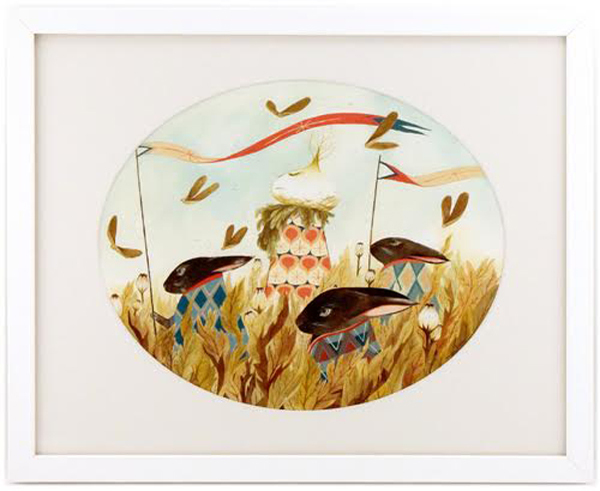 Ink and wash illustrator Nicole Gustafsson’s subjects are animals working or embarking on a mysterious journey through a palette of carefully applied wash which is absolutely luminous to the eye, lending to the overall effect of enchantment. Light emanates from tiny hanging lanterns either above or in the paws of Gustafsson’s incredibly detailed anthropomorphic animals. In “Lantern Lighter” and other works, you can almost feel the spots of painted warmth like embers of stars breaking through their miniature glass casings.

In “Night Reader” a hanging bat imbues an air of un-pompous intelligence, studying what we guess to be spells and incantations; in another, a studious fox sets atop a large tree root in a rose-colored flag stoned library while taking in some fine literature. You’ll feel privileged to look into these moments; feel you’ve been given a peek into a world we all believed in as children; a boundless world where animals shop for sweets, tend gardens with their grandmothers, gaze at constellations, and meander through dusky forests. 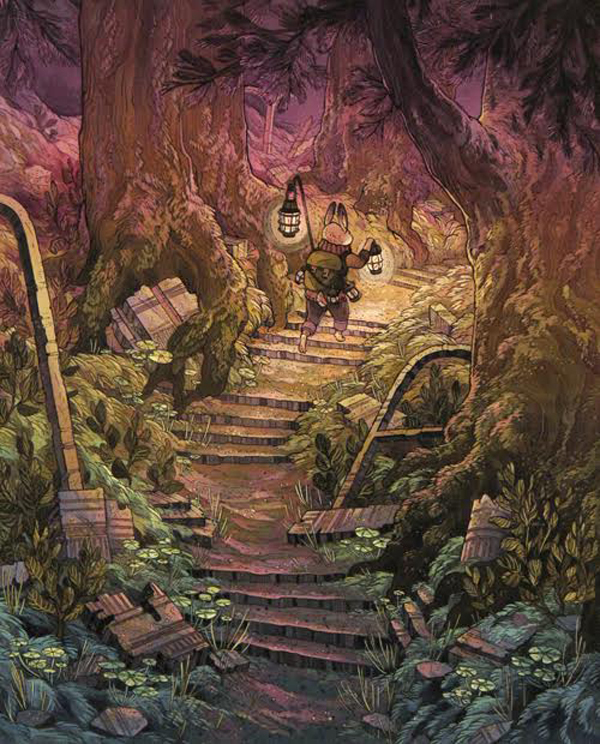 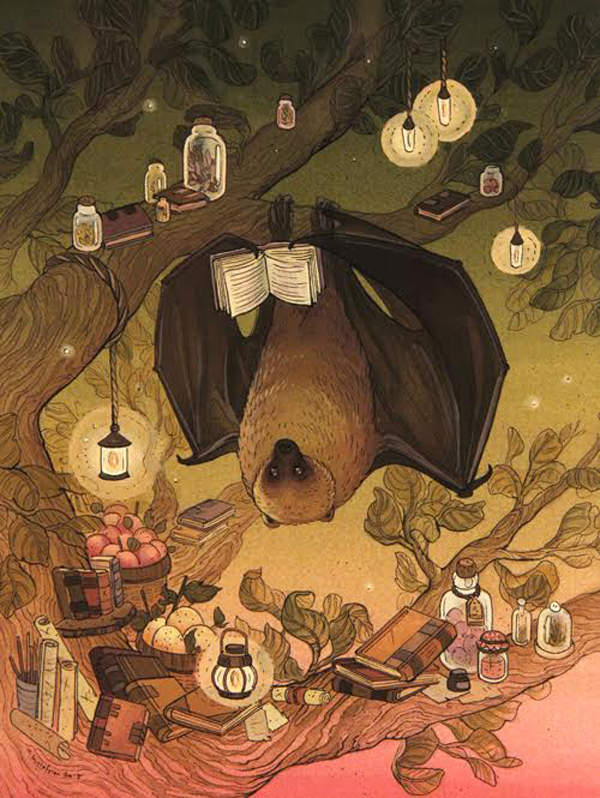 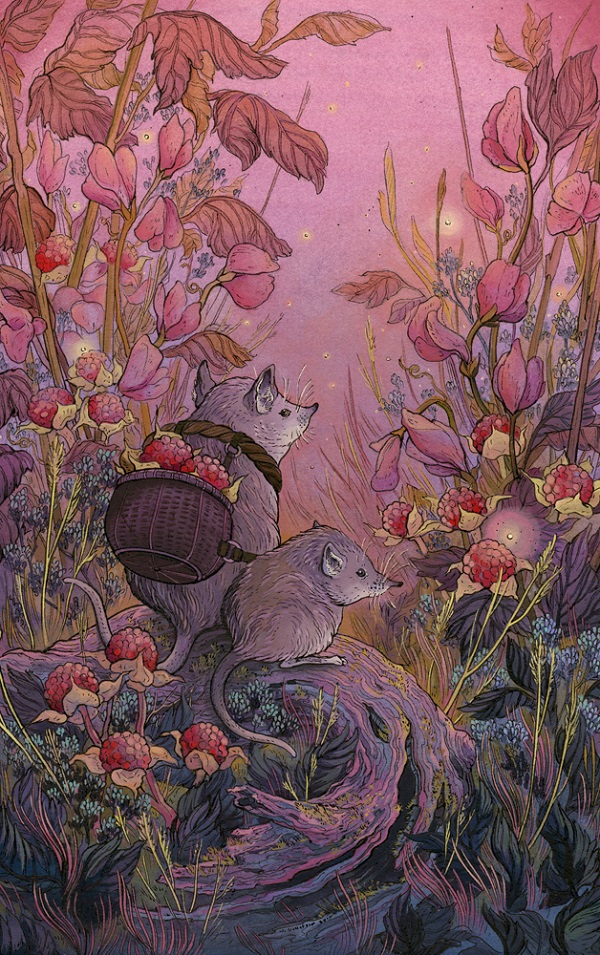 Mystique abounds in the work of Lorena Alvarez Gómez yet the tone is light, the mood less serious. Circular compositions radiate from the center like rainbow lit soap bubbles or magic snow globes that have somehow managed to swallow up entire ecosystems. These are the characters that have the power to crush sadness, to lift spirits up when spirits are glum: the bright, round eyed frogs and flittering fishies of “The Island;” the flowers in “Persephone I,” they pop the dark balloons of sadness, send it fleeing. Dark thoughts are disallowed in these tiny orbish worlds of chipper squirrels, monkeys with looping tales, mushrooms, and mischievous pixie glances. Deliberate delicate lines and controlled washes of ink arouse feelings of masterful application. You cannot look upon this work without an appreciation for the artists incomparable attention to detail, most noticeably in the life-filled beads of eyes that hold infectious innocence and charm. 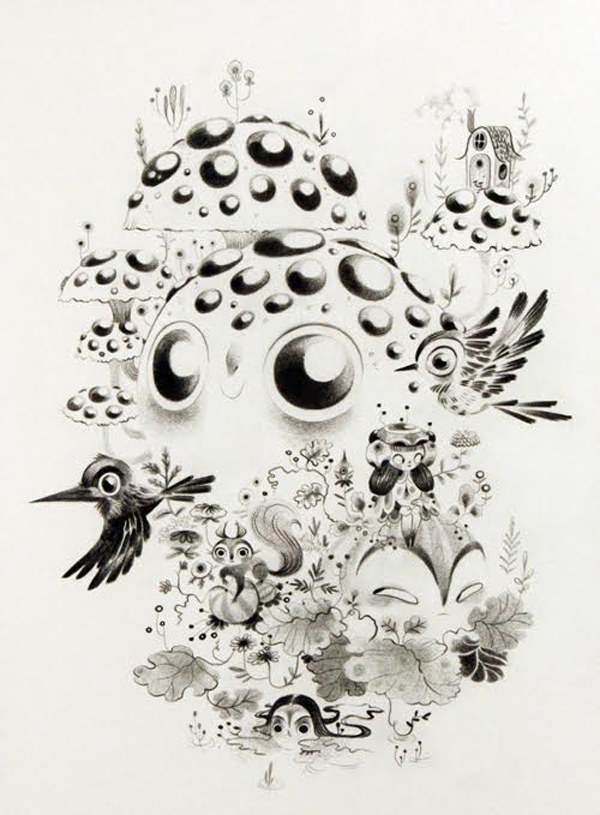 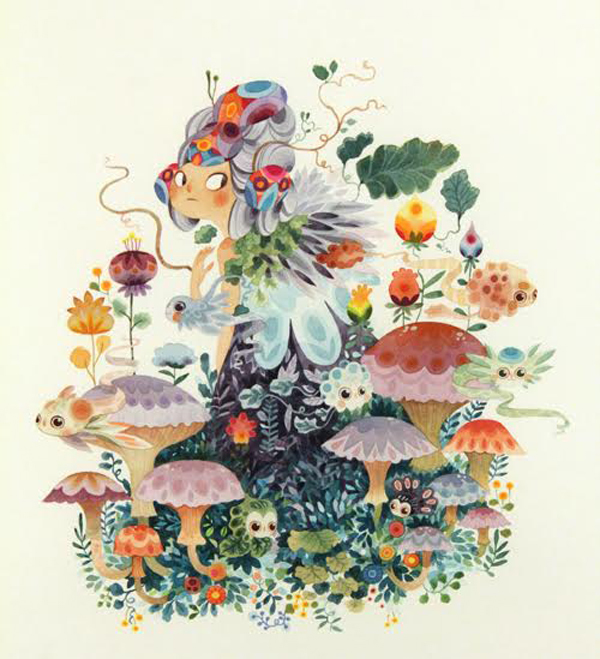 Gaze upon the work of May Ann Licudine, better known as Mall, and prepare to once again be stunned by detail, to be awed by what was applied by the hand of an artist with hands as steady as a surgeon. Foxes and felines with the daintiest of fingers and the feet of ballerinas. In “Chouko” a gray tabby with furry cheeks sets atop a floral skirt held aloft by the flitter of butterfly wings beneath it. She sits with coral gold light beneath her and skeletal dark branches and hints of dissolving seed pods above.

The work is painted directly onto textured squares of wood, the tiniest of details raised up by the undulating surface beneath, begging the viewer to come closer. Aged gnarled branches are painted in pastel alongside baby blooms of bright tender blossoms. Skirts sail in the air, sashes are blown back the bows of kimonos pomp and bend, looking ever so grand on the graceful feline wearers. The most dreamlike capture is “A Burst of Spring” wherein a cat is poised hovering over fronds, ethereal gases, and triangles fragmenting from a lower bright corner of the painting. In “Moriko” radial spines of Venus fly trap open mouths contrast against the lilting frilled seeds lifting from the spherical stems of a cluster of cloud soft dandelions. 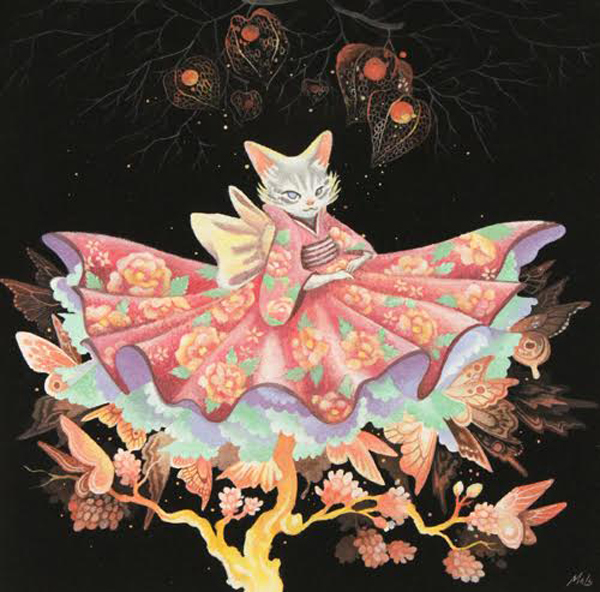 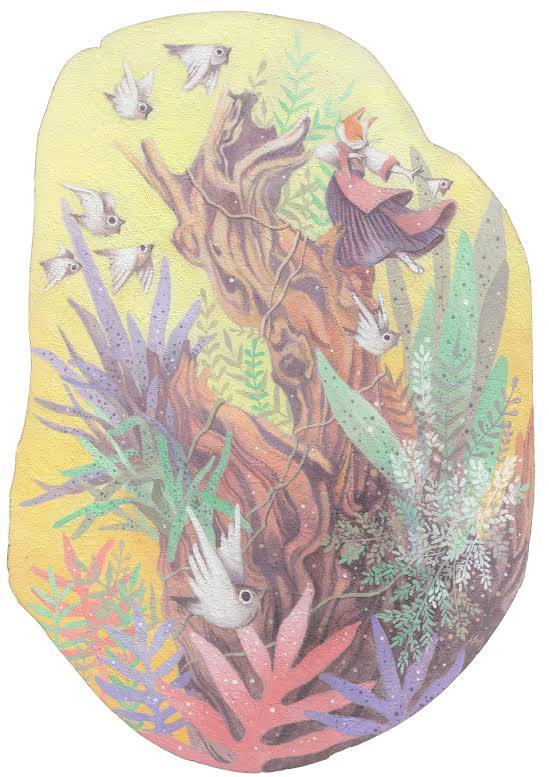 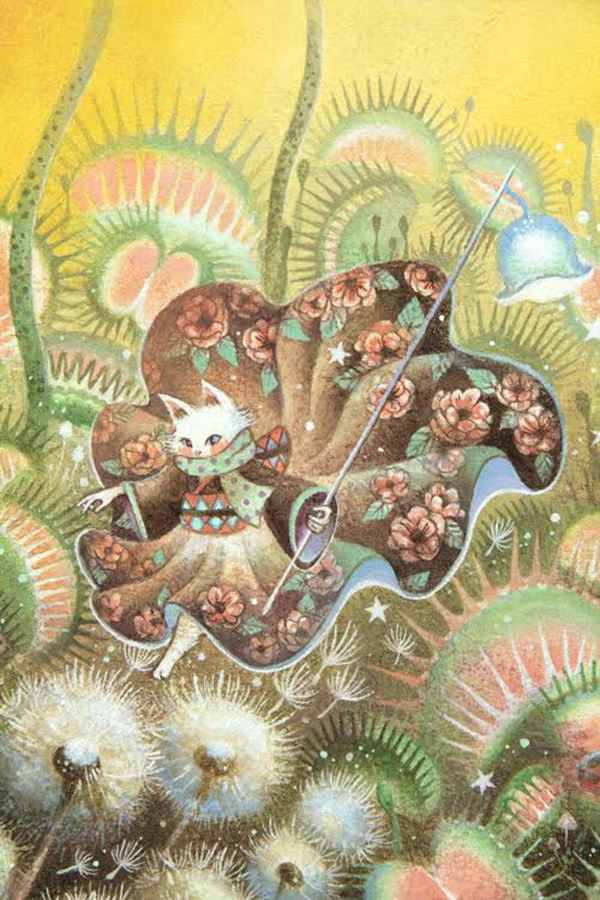 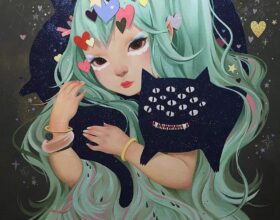 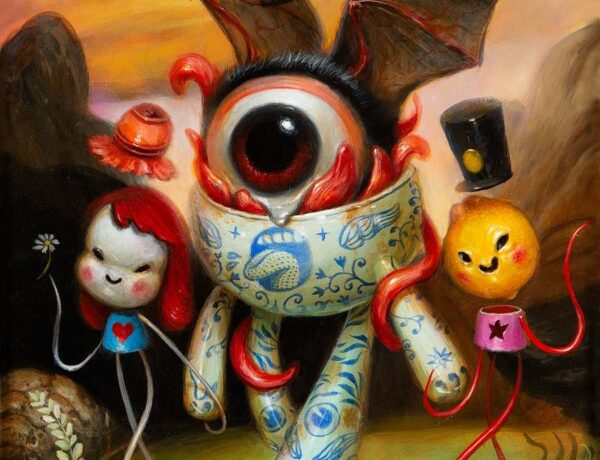 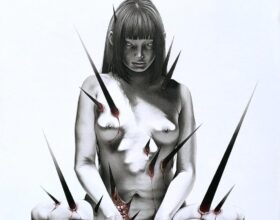