Joram Roukes ‘The Great Beyond’ @ StolenSpace

With battling layers of realism and abstraction, artist Joram Roukes creates his own strange world through a surrealist daydream of bright color, anthropomorphic characters, and confusing scenes. This Dutch – Los Angeles transplant expresses his confusion and dissatisfaction with contemporary culture, consumerism, and celebrity-obsessed society through oil paint on linen. Roukes’ creations force their way into areas of your imagination and heart that you wouldn’t expect. Like a game of “exquisite corpse” Roukes subtly expresses whimsy and panic simultaneously with his work, while critically examining western society and creating thought-provoking creatures and scenes. His latest body of work, ‘The Great Beyond’ will debut in London on Thursday, May 21, 2015.

This is Roukes’ second solo show with his London gallery, StolenSpace. Though he is represented by many different galleries across the globe, StolenSpace gives Roukes a certain amount of freedom and support that seems to help his process expand and flourish. Fascinated by the decay and deconstruction of humanity, Roukes finds the expressive subtleties that strike a critical chord in his viewers, and plays with familiar imagery and piecing puzzle-like constructions together to manipulate perceptions.

Joram Roukes ‘The Great Beyond’ 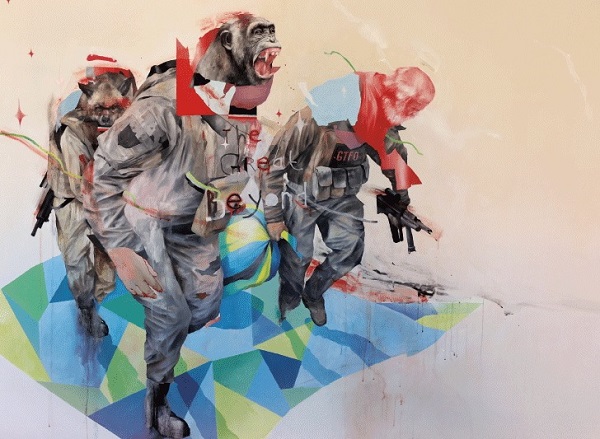 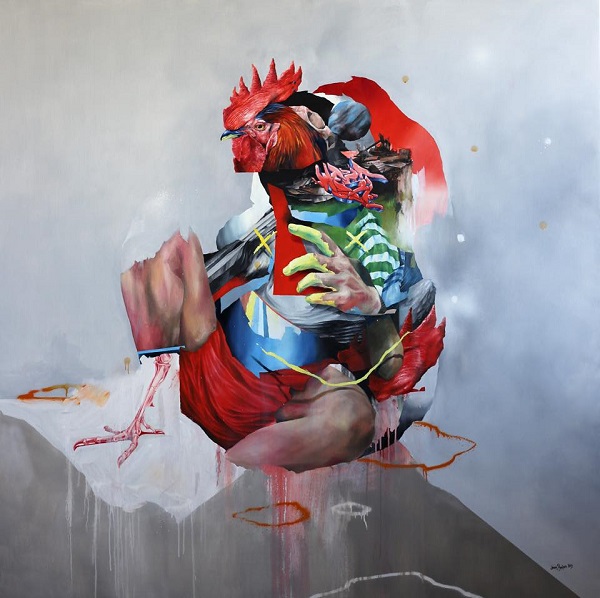 Originally from Lelystad, a small town near Amsterdam, 31-year-old Roukes moved to downtown Los Angeles in 2013. Classically trained and obsessed with graffiti and urban cultures, he draws inspiration from the dissonance he has experienced in his nomadic lifestyle and the many different cultures he is accustomed to. He uses it as fuel—along with the restlessness and intensity that are inherent in his being—to express the fragmented modes of operation humans have, in the United States and abroad.

Working in large format, his use of space and depth are hypnotic and dreamy. As if scenes were taking place in some barren surrealist landscape with sharp corners, pollution-filled starry skies and tranquil blankness his creatures are often floating in their own private matrix-like emptiness, helping to create an otherworldly atmosphere while aiding the viewers to focus on the intricate details in each piece. Each massive oil painting is full of melancholic energy; they often feel at war—each demanding attention and arrest. His figures are placed with car crashes, billowing smoke, strange picnics and disheveled chaos.

His style of painting is haunting—like a collage of different magazine clippings, some pieces more developed than others, juxtaposed with surprising neighbors, all coming together with a the slightest symbolic meaning behind each choice. These anthropomorphic creations seem to simply invite story telling.  Seamlessly mixing different styles—urban influences, pop culture, fantasy and surrealism. The artwork is inherently dark. Even the brightest of colors are offset by content or rendering style. His paintings often circle themes, like buzzards circling a dying animal, but never diving straight in to one idea. 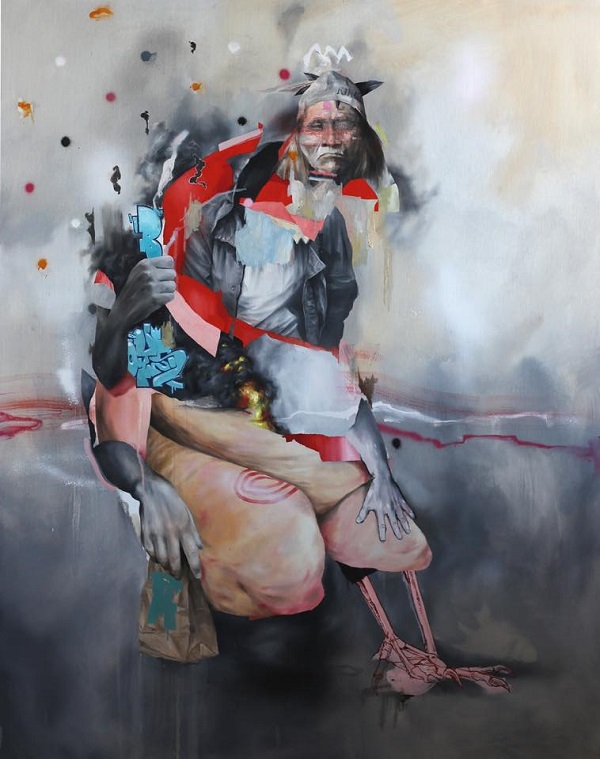 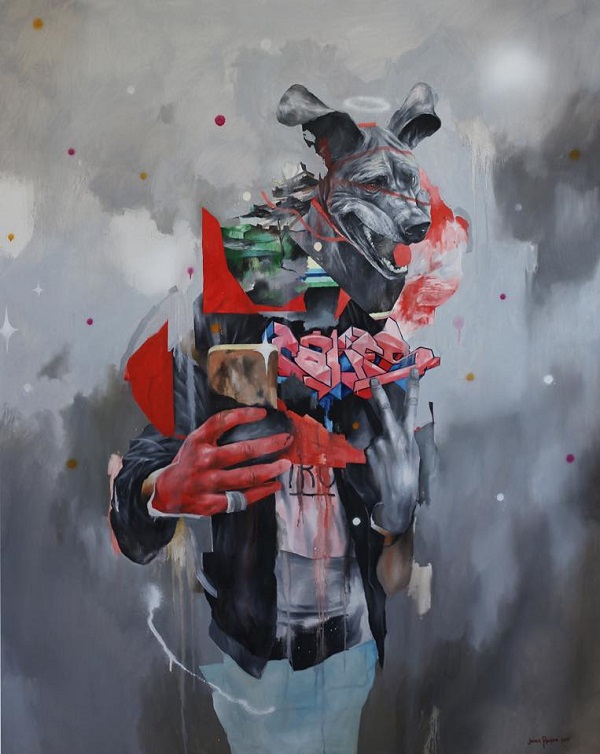 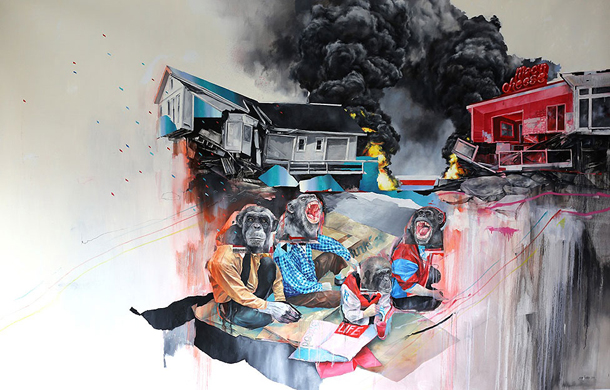 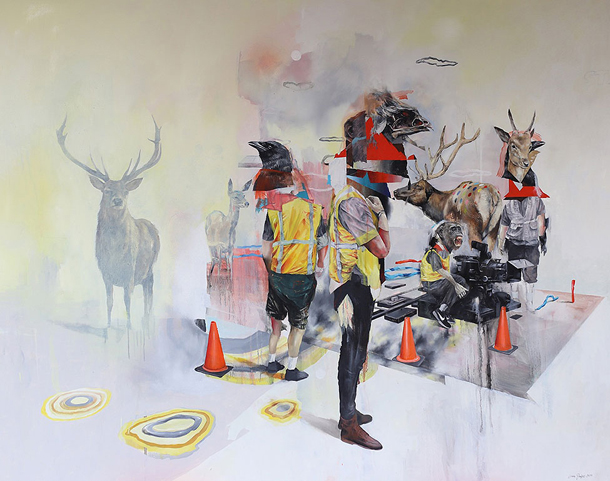 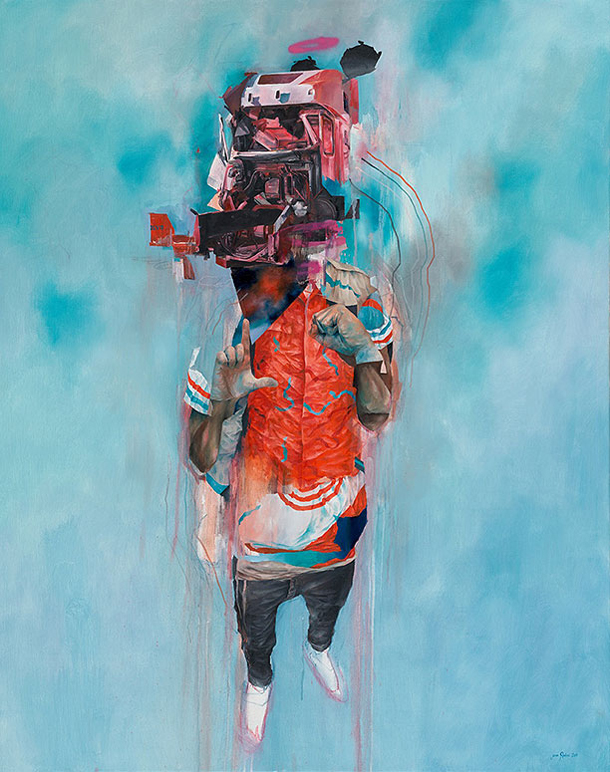 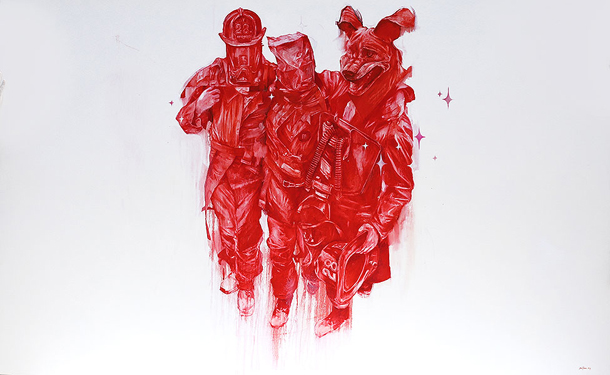 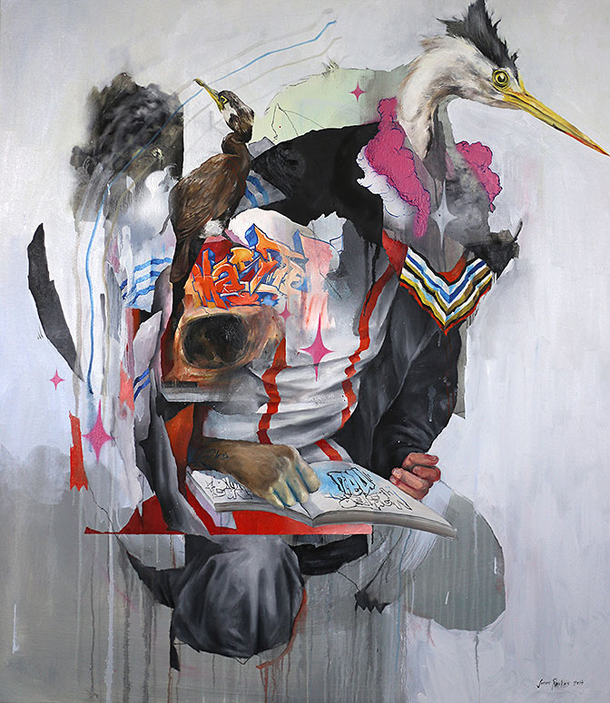 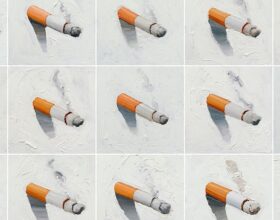 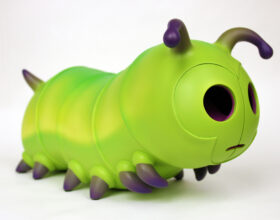 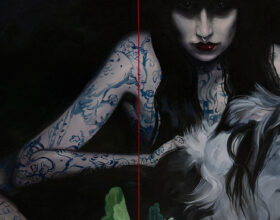