Beautiful.bizarre recently paid visionary artist Martin Stensaas a visit at his Salt Lake City studio, and got him to take a break from getting ready for show at the Luminarte Gallery & Bash Contemporary so that we could spend some time talking about everything from his sophisticated painting technique, how to use nude drawings to get sent to the principals office and why you shouldn’t hide french fries in waffles.

Can you tell me the first piece of art you  remember making that stands out as really being taken note of by other people or that you were really proud of?

The first art I remember really getting noticed was a nude I drew in class when I was 8 years old. I had a crush on the teacher and I kept drawing nudes to up-the-ante to get her attention. Finally, when I drew a Charlie Chaplin mustache, bowler hat, and cane on the nude, that pushed it over the limit of her permissiveness and I was sent to the principal’s office. Later, when I was 14, I started to draw these grotesque, occult-looking sigils -like elaborate mutant eyes-of-Horus- which got a lot of attention. 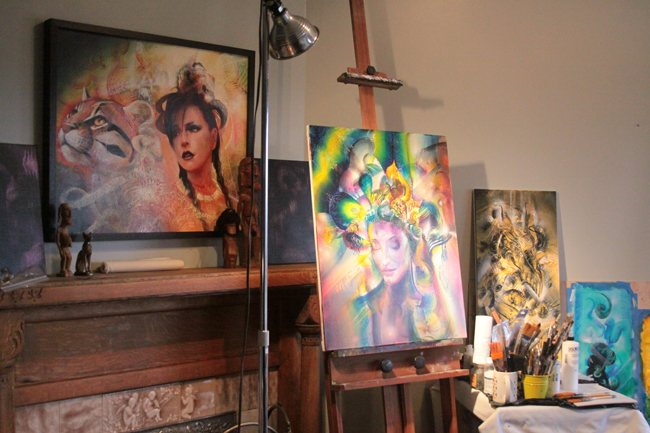 Tell me how that early work transformed to the flowing energy & light that your work is now?  What your technique is, and how it has changed over time?

Those early tendencies -like the figure and the occult mystical motifs- have resurfaced together in my work over the last several years. For a very long time before that, there was a disconnect between my interests and the art I was making. I had to abandon the prevalent postmodern deconstructive posturing, and get back to my Symbolist/ Romantic tendencies. Discovering CG Jung and Depth- and Transpersonal Psychology allowed me the intellectual solidity to embrace the Romantic position with clarity and sincerity. Artistically, I went back to exploring naive visionary motifs from before art school. I had always enjoyed working with rich color glazes, as well as custom lettering, intricate filigree line work, graffiti motifs, and shamanistic weirdness. Gradually these disparate things began to fuse together.

The way I like to work is to begin with an improvisational abstract lyrical composition. Gradually, some kind of subconscious gestalt will emerge after several hours of work. Then I will embellish and enhance the figure, adding layers of luminous glaze and a push/pull of values using hatch work or intricate patterning.  Also, around 2011, I began to use the rubber brushes, called “color shapers”, in combination with glazing to get this built-up spatial vibration effect that I really enjoy.

Sometimes I use the airbrush, but sparingly. I know a lot about Photoshop, and it definitely informed my approach to layering, staging, and luminosity… but I almost never use it now. Sometimes people think the work is digital, but it’s not. In person, it’s definitely paint, and it has a richer physicality. I also like to make effects to discover at different distances from the original work. 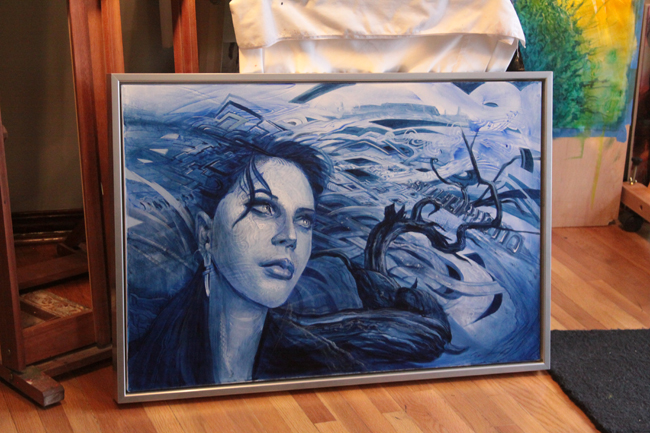 You do a lot of collaborations, which is so cool.  Can you tell me about one of your favorite collaborations and something that you learned from another artist while you were working together?

I really enjoy the collaborations because it is such a learning experience. It is also an intimacy-building exercise. There is a unique dance that forms with the right balance of merging styles, dynamism, and finish. Everyone has to have enough magnanimity to allow the others to do whatever their judgment or impulse leads them to do, and at the same time try not to be a dick and rampage over areas that are ‘done’ according to the other partner’s way. It’s extra improvisational in a way that some musicians must experience when they jam together in a freestyle way.

I first got involved in collaborative art drawing with my wife, Sunny Strasburg, many years ago. Last year I made a lot of oil paintings with the Oyster Pirates, a collective that has included a variety of people but mainly consists of Sri Whipple, Jason Wheatley/TiKu, and Christian Michael. Sri invited me to come paint with them. I had been a big admirer of his work for years, so it was great to get to know him and his process as well as those of Jason and Christian. My favorite from that series is “Chimera Progenitor,” which we all worked on. It’s a kind of vaginal explosion of animal motifs, bathed in a sublime fluid/light ambiance. I’ve also learned a lot collaborating with Sunny and Benjamin Wiemeyer. Sunny has an emotive presence that is very alive. Ben has an angular, kinetic speed and fast instinct that contrasts my compacting tendencies. Sri has a sense of rich glossy finish which is unparalleled.  We all learn from one another. 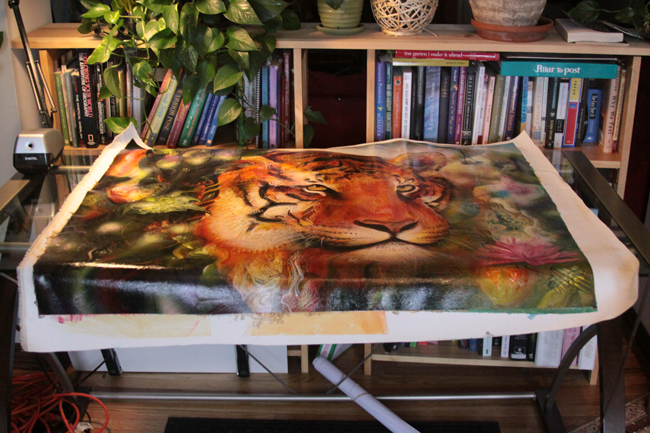 I hear lots of other artists praise your work, and you seem very involved in the art community in general.  Do you feel like art is more of an internal creation, or is it something that requires feedback and critique?

I like to get out and mix. I enjoy it, but I don’t have the time to do as much as I’d like. Also, I’m mostly an introvert, and I’m used to working in a solitary way. I do like to bring attention to work by others that deserves more eyeballs on it. It’s important to follow one’s interests and the work of kindred spirits. I’ve always been attracted to the strange in art, but live in a culture deficient in weirdness. Only in the last several years have I become aware of many artists I’m excited about, and the traditions and common inspirations we share. I’d like to be more of an organizer, but I don’t really have the bandwidth. I need to focus on what I’m best at. Now that I’ve found a way of working that feels natural and exciting to me, I don’t feel that I need the feedback and critique as part of the creative process. But I always welcome it because of what people focus on in the work, and what it reveals about them, too. 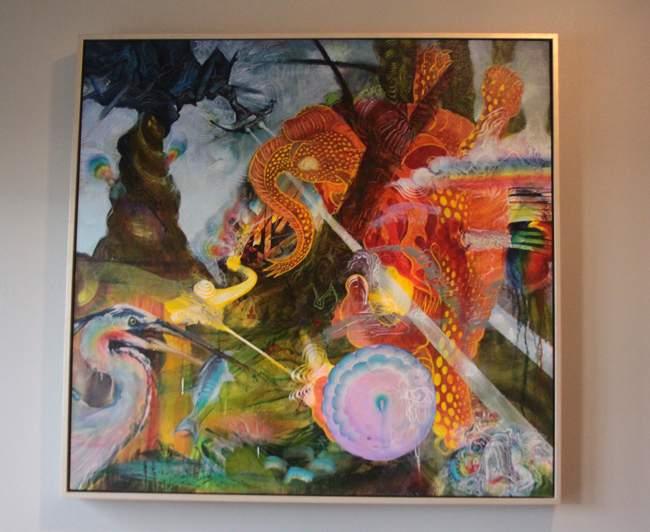 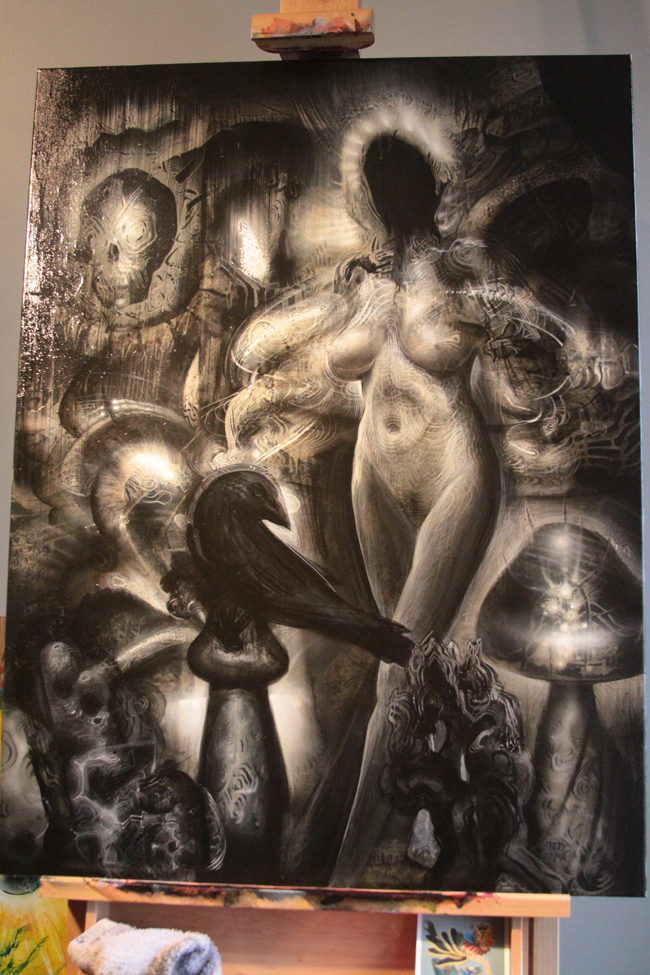 When we met, you gave me a well-worn copy of A Blue Fire (writings from James Hillman). I have heard James Hillman called “An Artist of Psychology”, but I would say the same description could be applied to your paintings too.  Can you tell me about your inspiration, and how spirituality and psychology fit in?

I have always been attracted to the extremes of the imagination. A a kid, I was attracted to surrealism, fantasy and psychedelic album art, and art from distant cultures. Later, I found the work of Jung to be very helpful in bridging the role of intense-often-symbolic- imagery with psychological development. Romantics like me are attracted to the Jungian end of the psychological spectrum because of its underlying premise: ‘The way out is through.’  The extremes of the imagination and of the emotions are not pathology per se, but are modes of learning and of developing the psyche. Intense and highly unusual art are features of an archetypal map of collective human consciousness. Jung differed from other psychologists in his acceptance of alternate modes of consciousness and the variable lexicons of imagining and expressing. He did not jump to pathologize and label patents as crazy or perverse, but rather studied their changing modes of attention and symbolism as a natural homeostatic healing process. Later psychologists such as Hillman, Grof, and Woodman have continued to explore this view, which has led to the field of Depth Psychology. Pursuit of the deeper transcendental, spiritual, and paranormal phenomena of collective and nonlocal consciousness has now become the field of Transpersonal Psychology. Mystical themes in art tend to have a distinctive signature, which supports the findings in these areas.

My wife, Sunny, who is also an artist, got her master’s degree in counseling psychology from Pacifica Graduate Institute, a Depth Psychology school. So I learned a lot about this tradition through her. In my paintings, I like to stay open to spontaneous archetypal imagery as it emerges. Generally, I don’t often ‘plan’ my paintings, but rather let them grow. Many of them tend to have a mystical or spiritual feeling or effect, but I don’t “try” to make formulaic spiritual themes. Jung said something like: “One does not find enlightenment by imagining figures of light, but by making the darkness visible.” 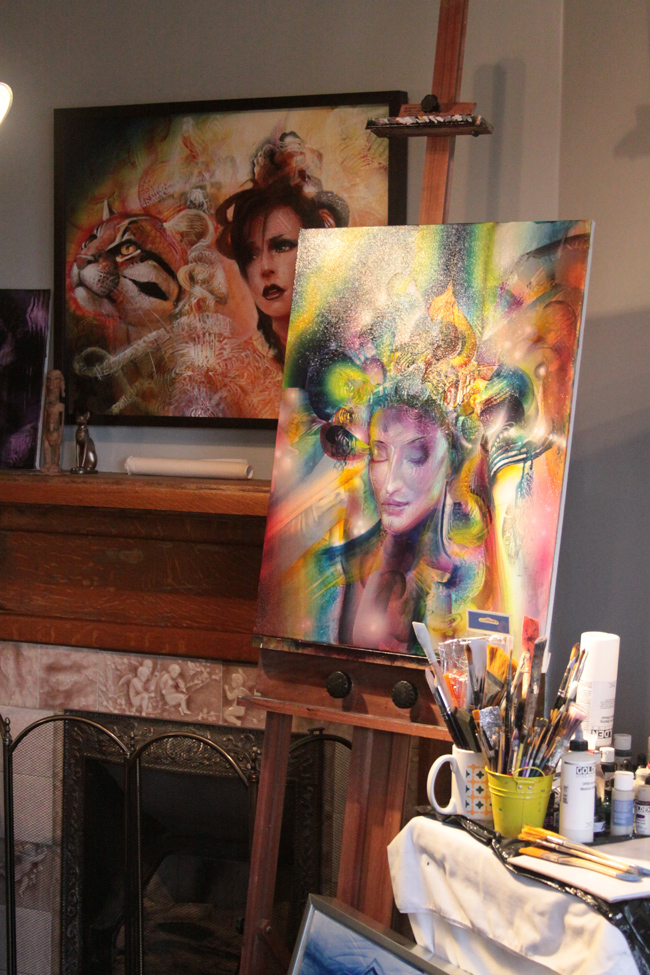 I feel like this interview is getting too serious!  Let’s try a few lighter questions. Bruges Waffles & Frites: Salt Lake City’s most overrated restaurant or what could be better than fries in a waffle?

I have to stay away from places that hide fries inside waffles. They’re dangerous. Plus, if I even have a beer, it seems I gain a pound. If I want to splurge on carbs, I’ll eat a big wad of black licorice. 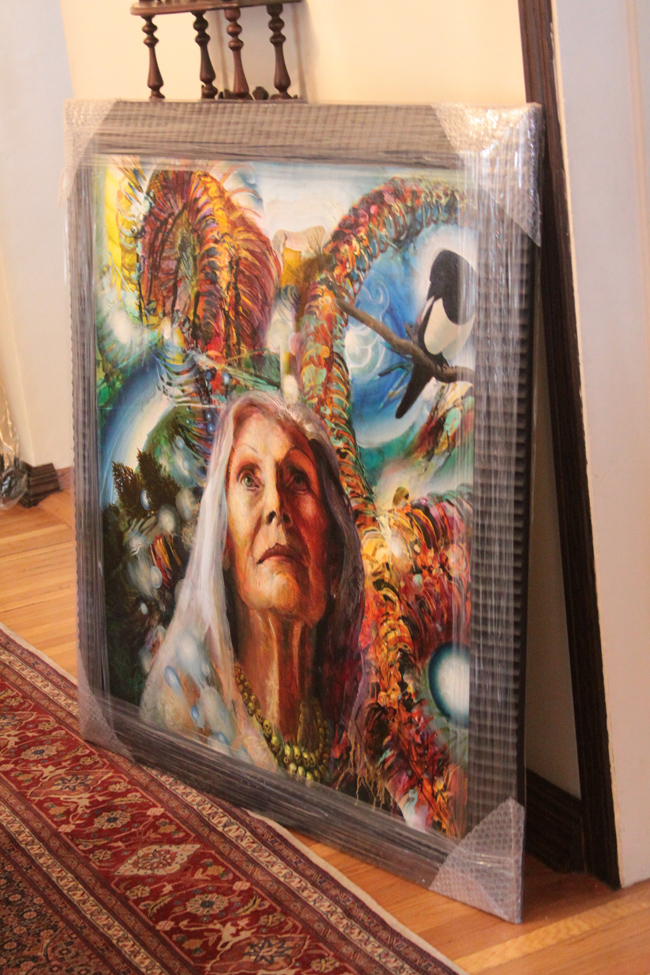 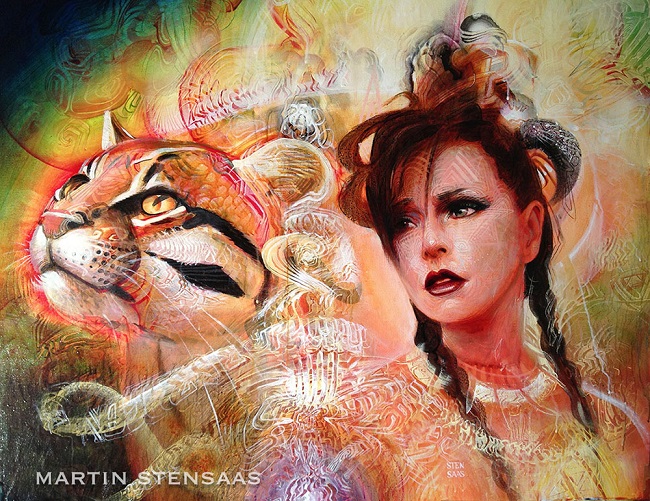 Do you go to Sundance film festival, and if so do you have any celebratory sighting stories?

I haven’t been involved with Sundance directly… though several years ago we produced some renegade film screenings in tandem with pop-up music and art events. Crazy shit like a film premiere, a Ralph Metzner panel discussion, and a Bassnectar show all in the same bar on the same night. At this point, I’ve been unplugged from mainstream media for so long, I don’t even know who 95% of the celebrities are or why they’re famous. 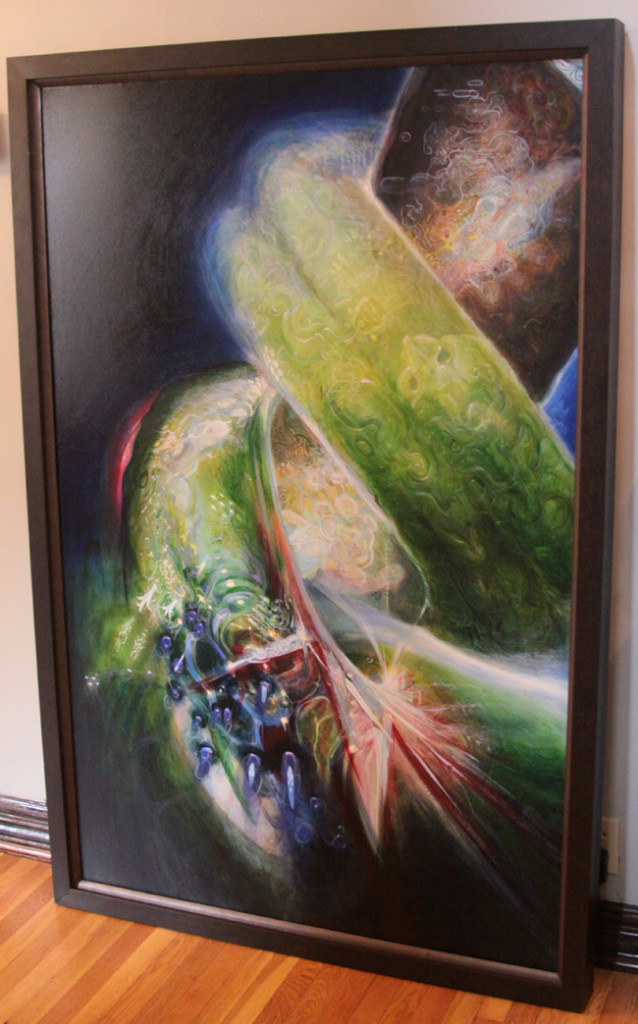 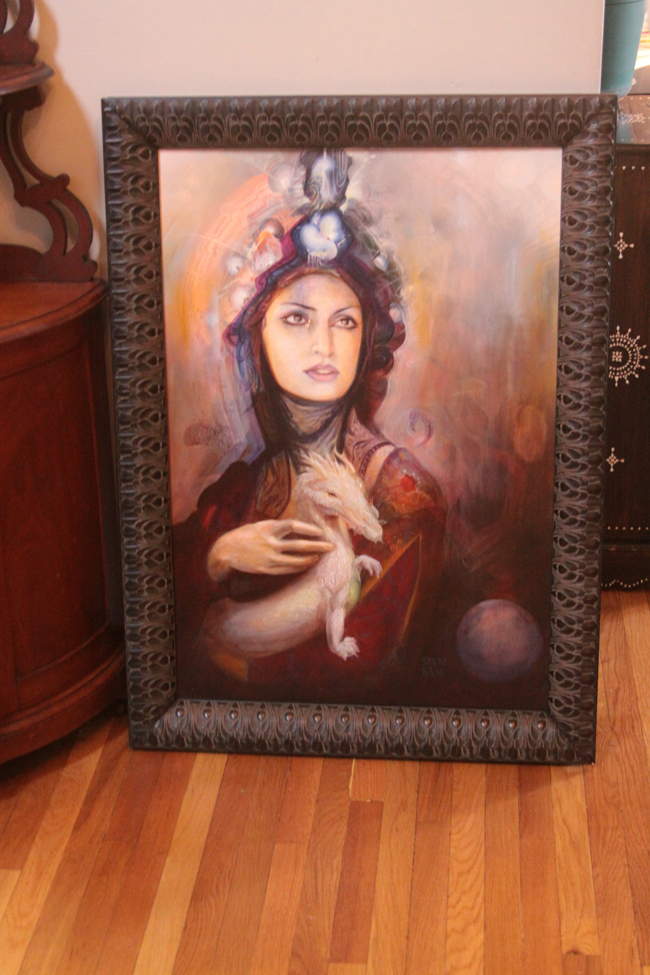 Can you tell us the story of the cat that’s on your back in your Facebook profile?

Right! Okay, we need a kitten right about now. So, the black cat who often rides on my shoulder while I’m in the studio is “Steve.” We adopted him when we lived in Costa Rica. He was abandoned in the road as a one-day-old kitten and we nursed him with goat milk from an eyedropper for months. Now he is the most charismatic cat ever. And he has a spiral tail.

(EDITOR’S NOTE: Steve is cute, but has an insatiable scratch lust and should not be approached.) 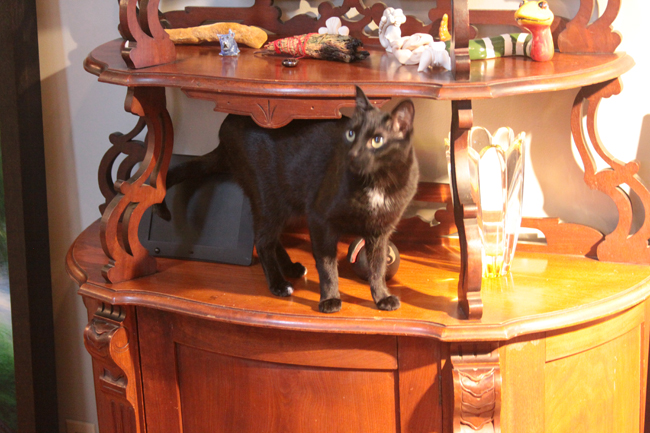 As you mentioned earlier, you are married to Sunny Strasburg, another amazing artist.   Do you offer each other critiques and insight?

Yes, we are usually involved in art-directing one another to some degree. So the collaborative paintings we do are a natural extension of that. We have a lot of overlapping instincts and we are frequently critiquing and offering observations or suggestions.

Do you steal her brushes?

We share paints, brushes, and palette. I’m only territorial about the water. 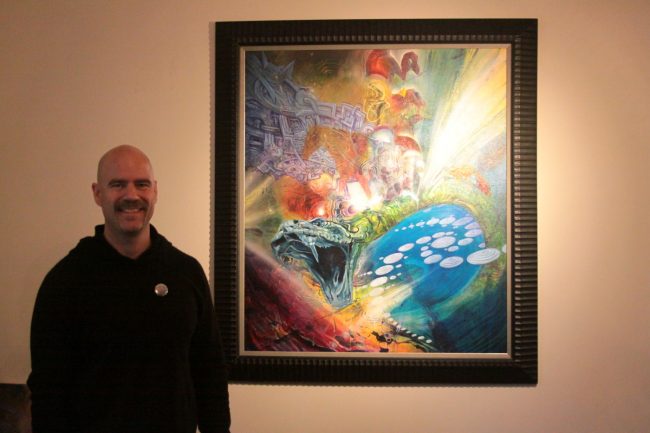 I saw your poster for the Mystic Hot Springs Music Festival, its so awesome!  Did you take a different approach to making the poster than you would for one of your paintings?

Thank you! Yes, the poster was a bit different. Mainly because it needed to have a spiral vortex motif and incorporate a variety of visual elements of the place. It developed in a more systematic way from a sketch, but still morphed through the process. 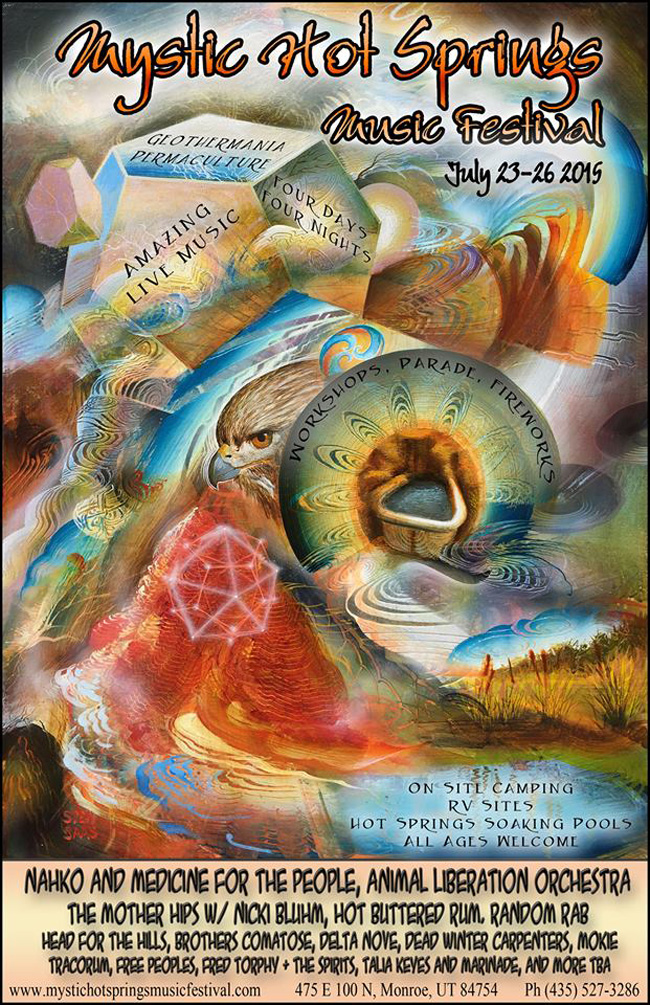 Can you tell me about projects you have going on now, and coming up?

There is a big art book coming out in May featuring one of my paintings along with loads of my favorite contemporary visionary/surrealist artists. It’s called the “Encyclopedia of Fernal Affairs,” produced by Dreams and Divinities, who curate internationally. They have a show up in Dallas at Luminarte Gallery, and another one in May at Bash Contemporary in San Francisco for the inaugural book launch. Sunny and I will be doing an all-collaborative show in Denver at Knew Conscious Gallery in January, 2016. 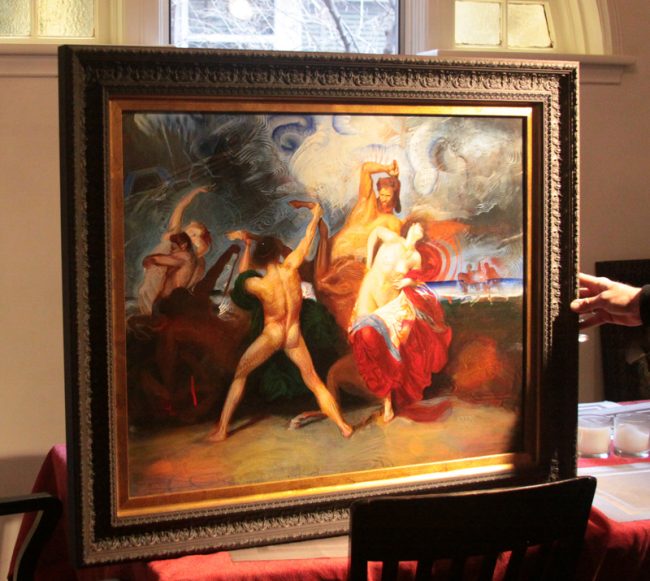 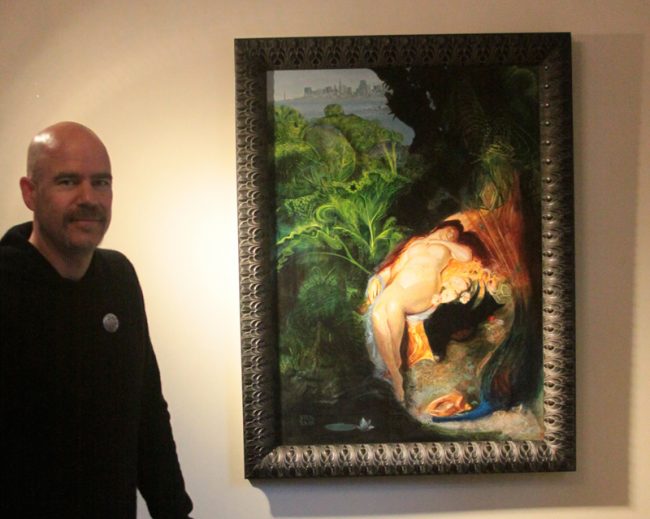 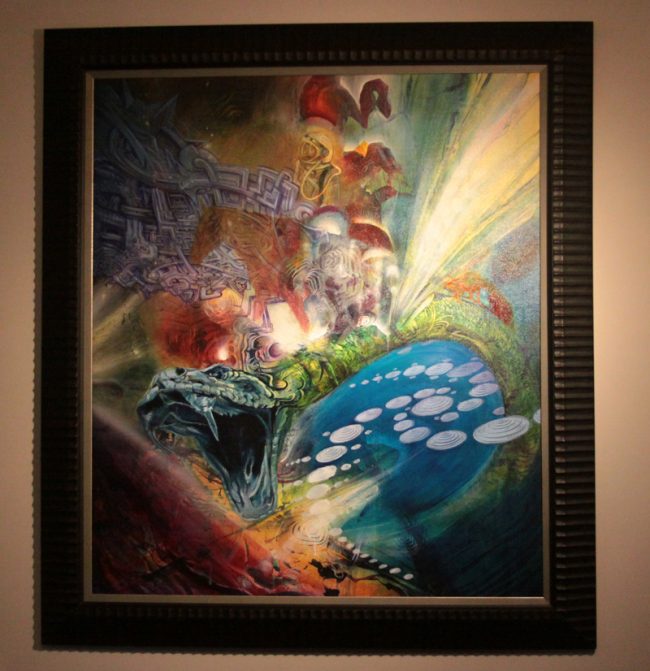