The Hive Gallery in Downtown Los Angeles will be celebrating its 10 year anniversary by putting on a once in a decade exhibition by showcasing the works of 200 artists. It’s important to note that the first 100 attendees will receive the Royal Jelly 2 DVD, a full length documentary on the history of the Hive that includes interviews, animations, and films. In addition there will be the grand release of the Hive Tarot 6 Deck, a limited edition deck from 1 to 100, for $20. 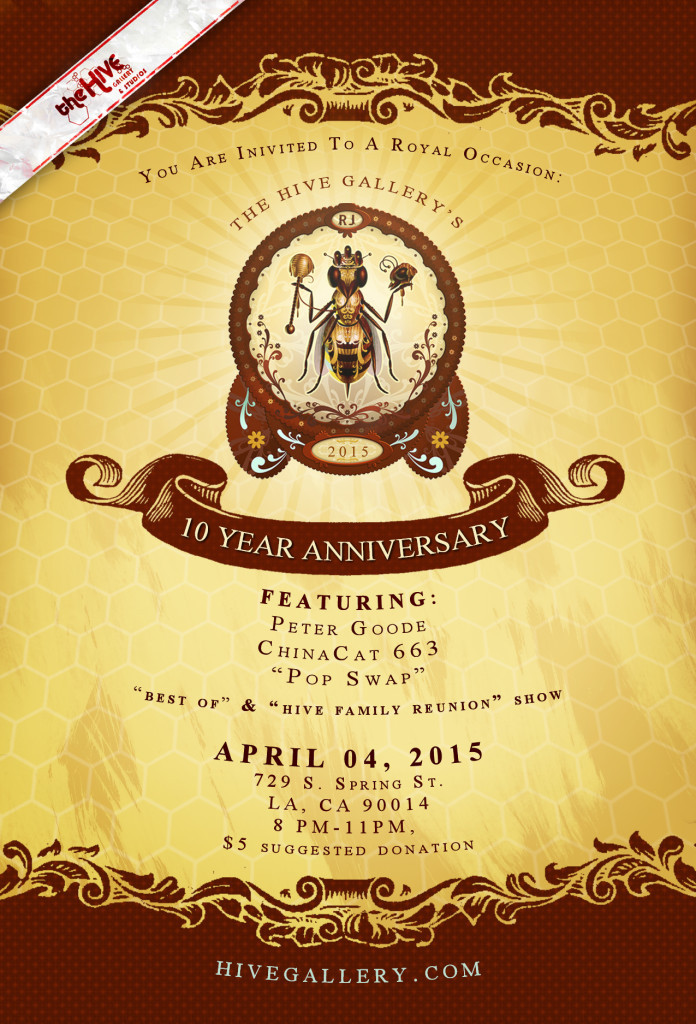 Performance art and cake cutting by: Wilkinson the Butler

Best of The Hive 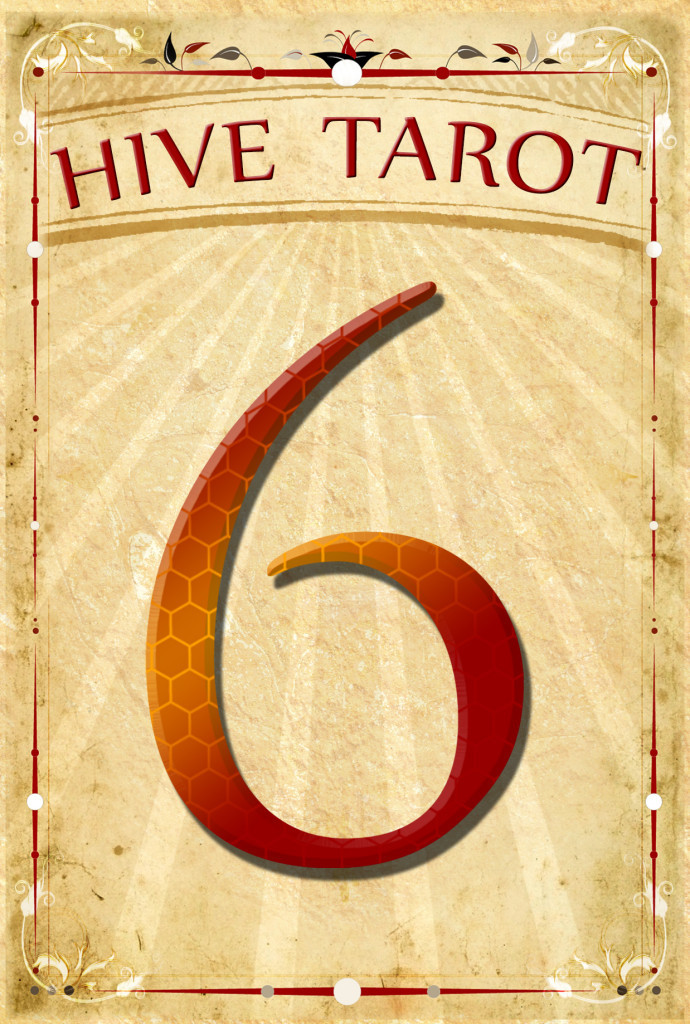 Entering The Hive Gallery you are first flanked by two walls showcasing the works of two featured artists. This is the first exhibition of several exhibitions that are a part of the monthly show. This month’s featured artists are Peter Good and ChinaCat 663.

The Hive is another world, more than it is another gallery. It is compartmentalized by several spaces that exhibit different theme shows all in the same night. Beyond the featured artists we enter the main gallery, four walls which showcase the main theme exhibit. For the anniversary show the main room will include a large group show of artists who have been featured at The Hive Gallery in the past or near very future. There will also be the Hive Family Reunion, a group show of artists who have held residency at the Hive for at least 6 months in the past and are continuing to work as artists outside of the beehive community. 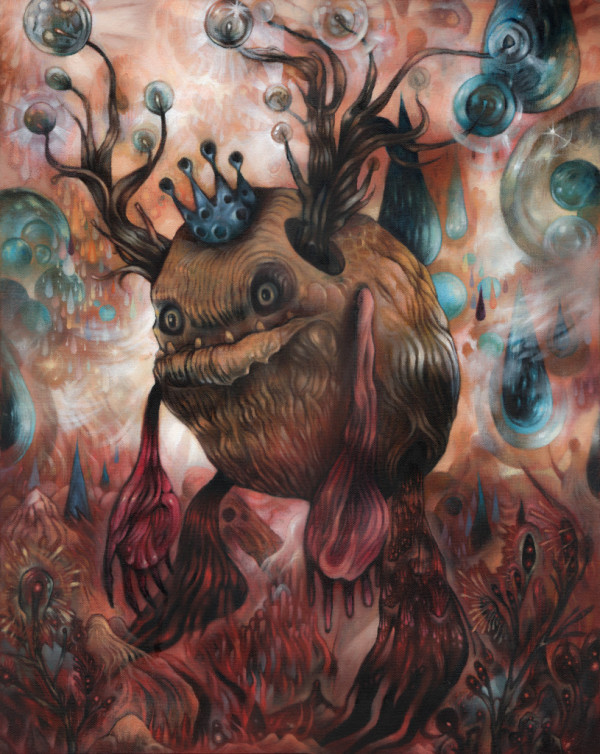 Between the gallery wall space and the ceiling is another space functioning independently on theme. Every few months this section of space is either repainted with a conceptual design or it displays an art installation. For the 10 year anniversary show artist and gallery director Nathan Cartwright curated “The Hall of Honey” Hiveland Installation that stretches across this space above the gallery walls. This installation, which includes video, sculpture and painting, is an enormous collaboration between Nathan and some of his favorite artists at the Hive. Artists have painted larger than life statues to represent their avatars in a fantasy realm called, Hiveland, which will be discussed in a moment. 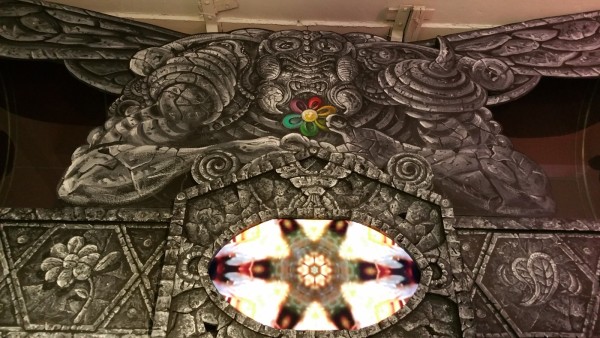 Behind the central wall of the main room are two walls dividing the main room and the back room. These two walls are miniature spaces featuring select artists apart from the main exhibition, known as the Tall Wall and Small Wall. 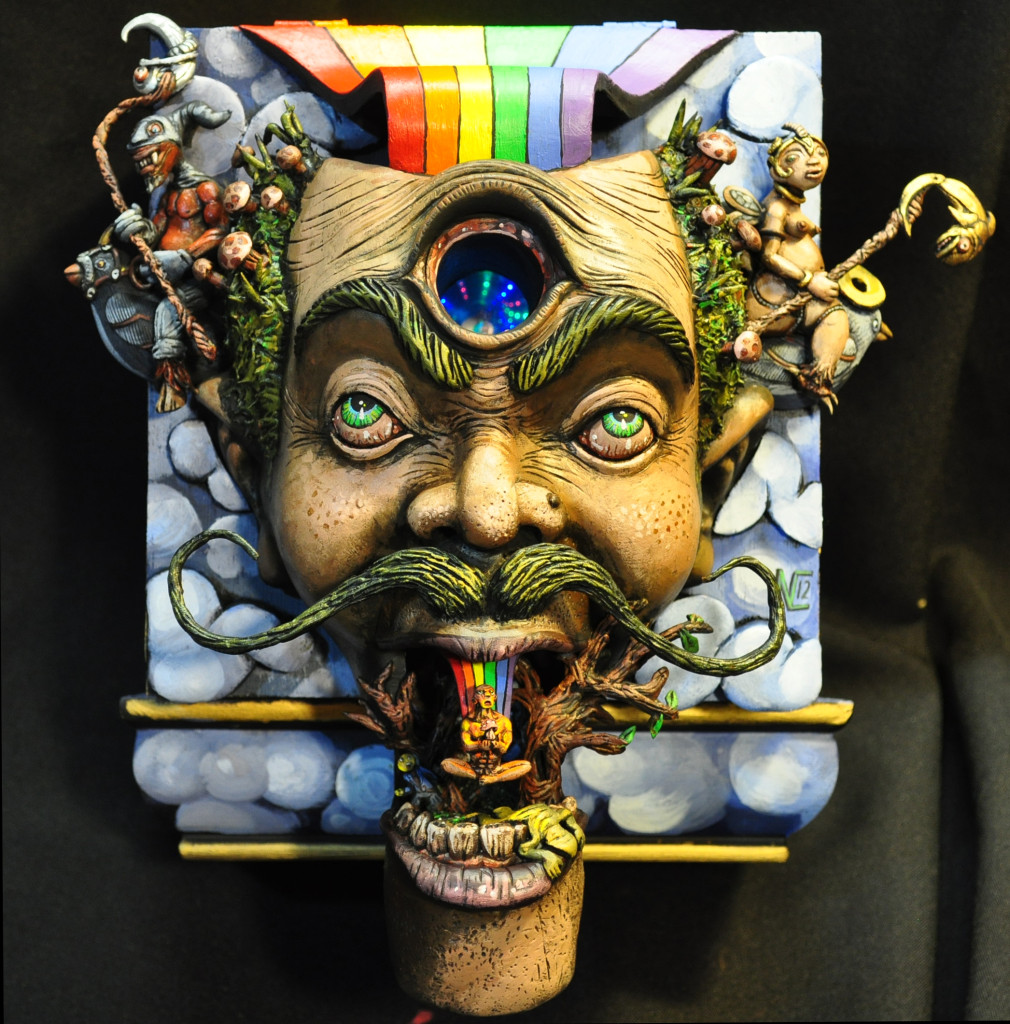 Beyond the theme room are the resident spaces. On either side of the room the space is divided by smaller compartments that exhibit the works of resident artists. For those readers who have not visited The Hive Gallery it’s important to understand that The Hive reaches beyond a conventional exhibition space concept. It is a place that serves as both gallery space, and as a complex for miniature galleries within a gallery. Resident artists rent sections of The Hive to maintain visibility for their work. Each month patrons not only get to see a new theme show, but also have the chance to revisit works from resident artists and to meet with. The Hive is where many artists in Los Angeles, such Audrey Kawasaki, begin their careers. Under the direction of Nathan Cartwright careers are cultivated in an environment that becomes a second home, thus making the artists at The Hive a second family. 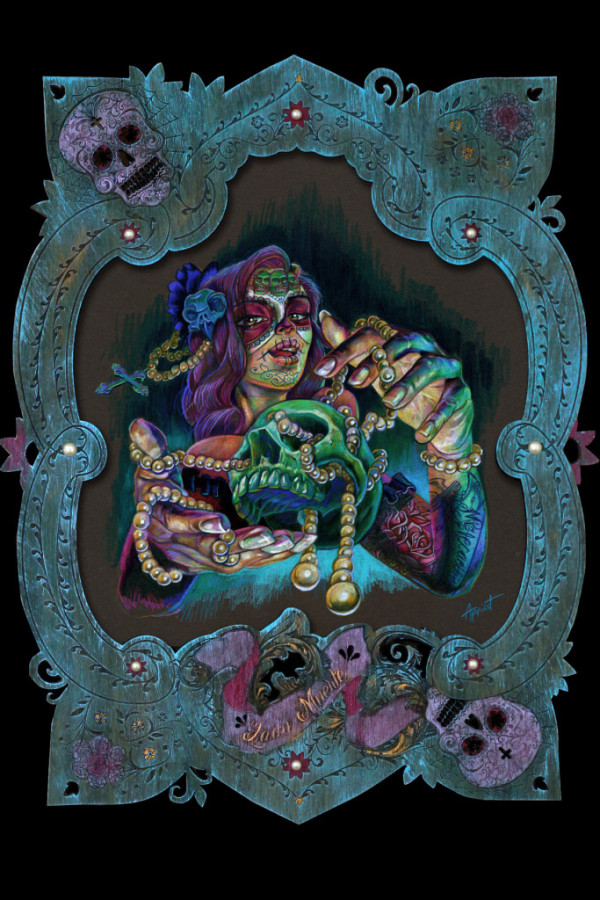 Patrons and artists of The Hive Gallery know it as Hiveland, an art haven conceived by Nathan Cartwright. Hiveland is an intellectual concept manifest by artistic personas, or avatars, that artists create to live in the world of Hiveland. “Hiveland is a parallel reality to the Hive,” Nathan explains. “I pick artists that have been featured, and they create avatars that then live in this world called Hiveland. There’s six realms, actually there’s seven, but the seventh can’t be accessed. It’s total Dungeon and Dragons. And each (realm) corresponds to a chakra. There’s the Muladhara, which is like the darklands. That’s where the dark queen lives. Then there’s the Fire Lands—that’s like the sex chakra. The Melting Pot is a land of swamps. The Heart Land is where the Queen Bee lives. The throat is call the Forest of Zub.” 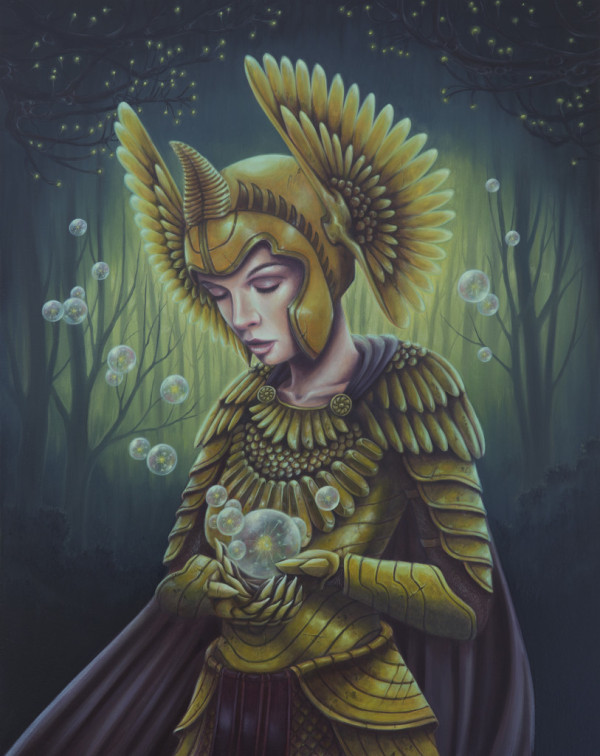 So not only is The Hive Gallery a complex space of galleries, it is layered with a philosophical construct. It’s a place where emerging artists are cultivated in the business of selling their work in galleries, but also honing their skills. Every month Nathan hosts a sculpting night where artists come together and sculpt. When you look back at the history of The Hive and see the artists emerging from it today you will see that this is one of LA’s best kept known secrets. The Hive is a sanctuary for the underground art scene, but it is also responsible for being the bridge into the mainstream for many contemporary artists.

Whether you have access to Los Angeles or not this is significant gallery to keep tabs on. Future manifestations coming from Hive will be the continuation of their Tarot deck series, for which Hiveland artists create stylized Tarot cards that are then included in a deck. This is yet another layer of exhibition conceived by Nathan. There is also discussion that the Hiveland concept will become a book…perhaps a game. Though The Hive is a full-time commitment, Nathan participates in many gallery group shows throughout Los Angeles, His concept for Hiveland is ever-expanding and the hundreds of artists associated with the gallery provide endless opportunities for creative projects. Nathan is one of those artists who tells someone about an idea he was thinking about doing, and then he does it, no matter how grand and complex. So who knows what honey The Hive will manufacture in the next ten years. 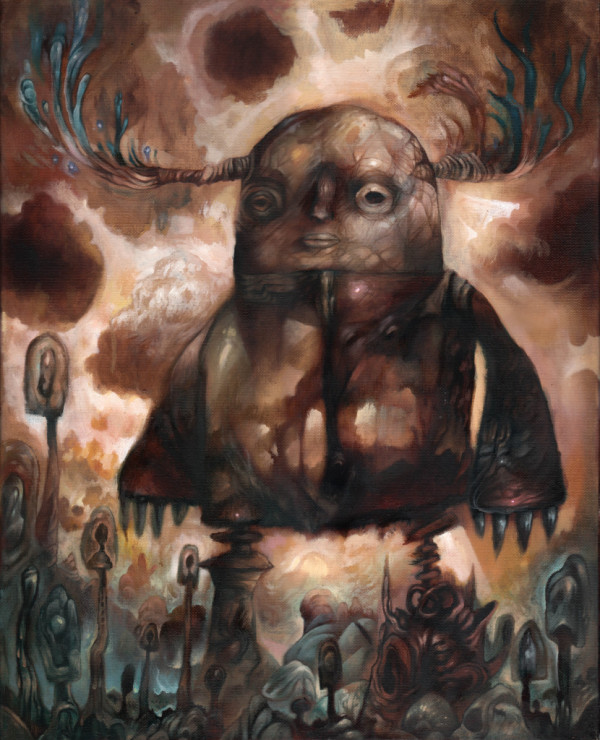 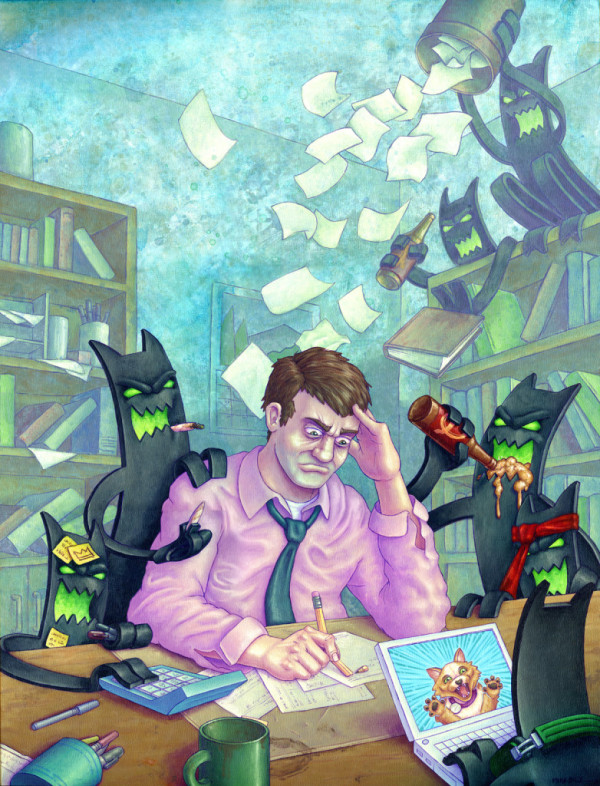 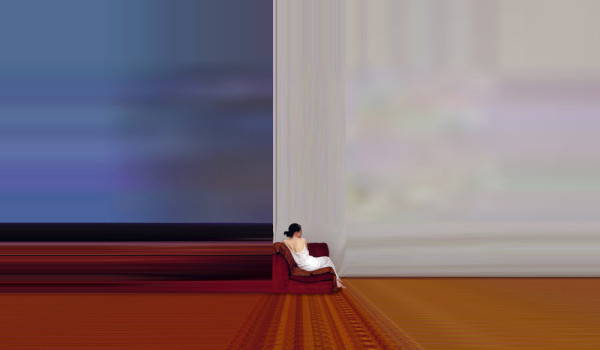 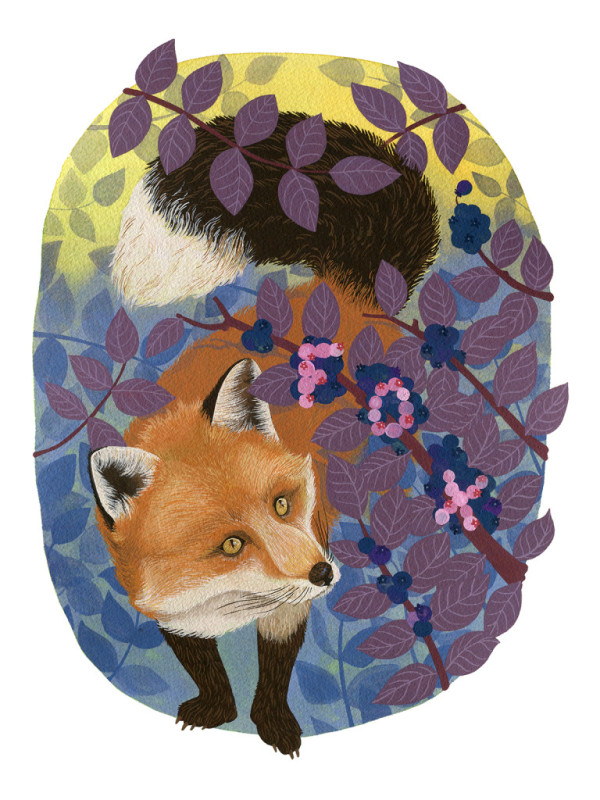 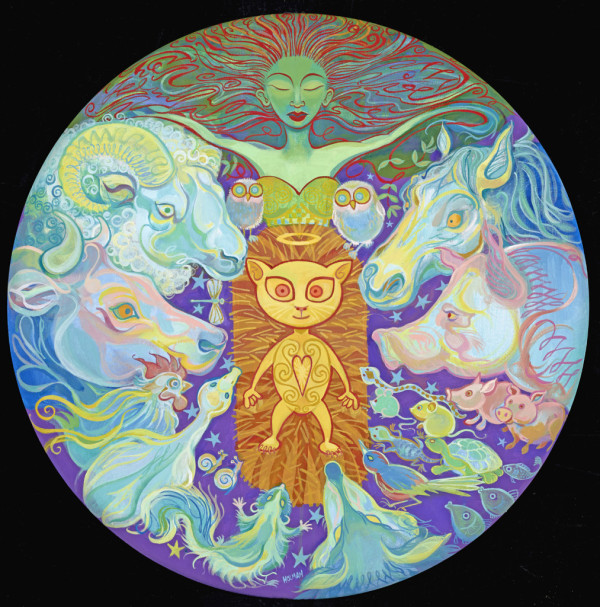 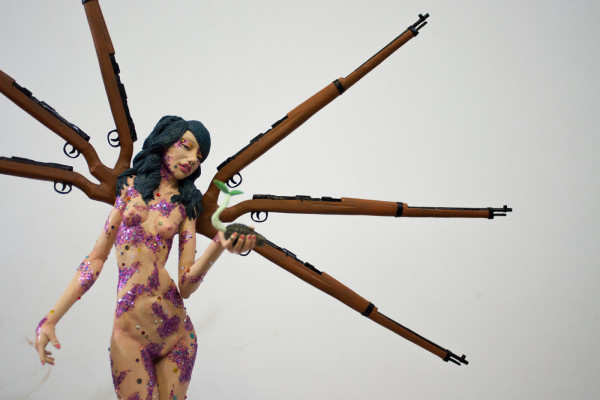 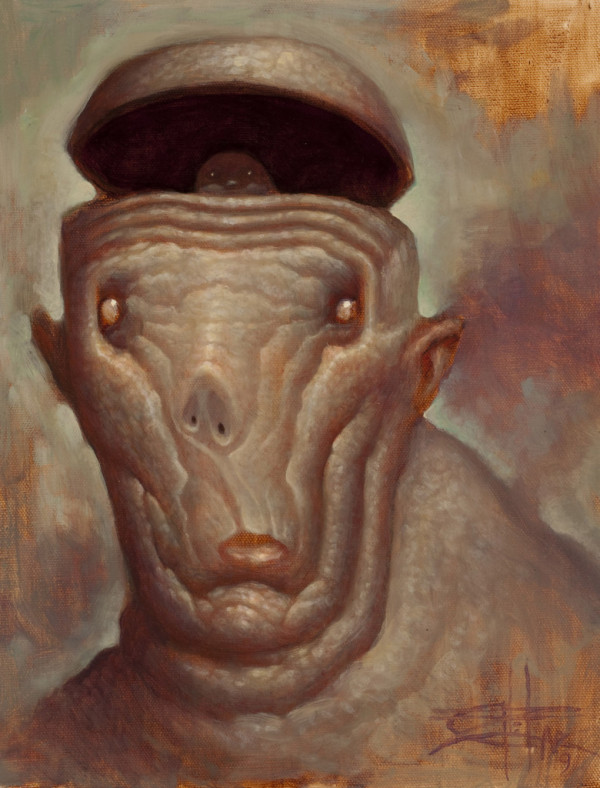 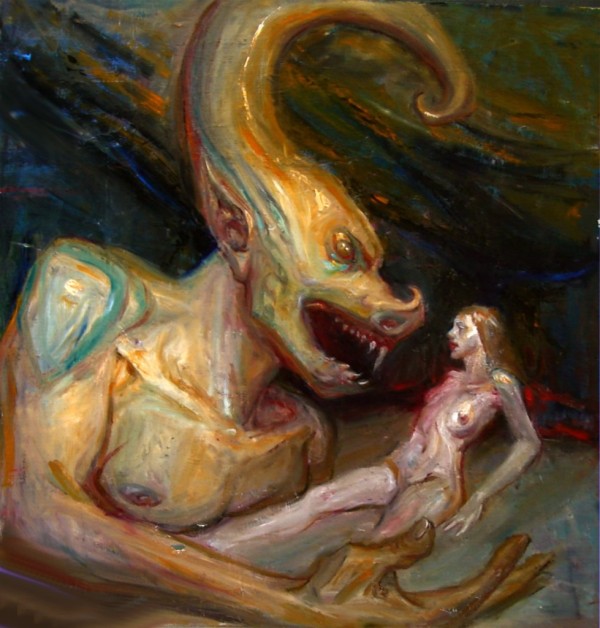 Beauty and the Monster 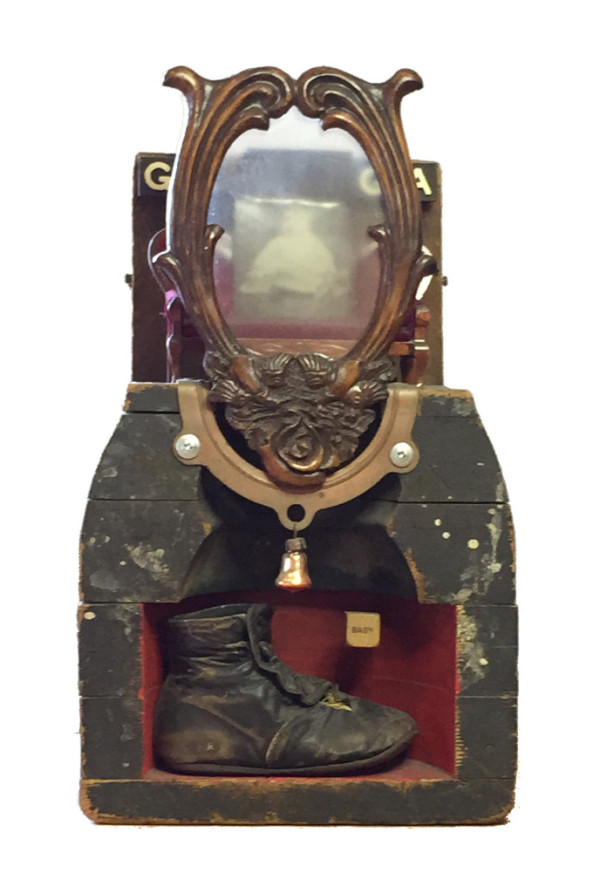 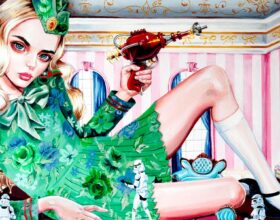 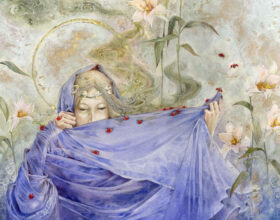 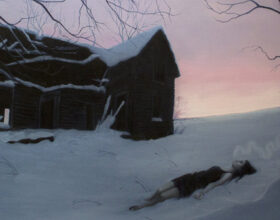 Interview with Joey Remmers @ CHG Circa Gallery ‘The Lost’ Opening