The strange yet sensitive world of Kim Simonsson’s sculpture

There is a certain innocence in Kim Simonsson ‘s contemporary sculpture. The children and animals that come out of his artistic vision, using materials like stoneware glaze, ceramics and glass, among others, reminds us of the toys we shared our childhood with.

Simonsson created his first ‘sculpture’ was when he was small, carving it in his parents’ backyard. Even at this early age, he felt he needed to inspire a sense of movement in an object. Since then, capturing in his figures an ideal movement, combining ceramic pieces with the modern trends of the eastern pop culture.

The Finnish designer, Kaj Kalin, believes that Simonsson’s work looks like the spirits of dangerous toys while Yves Peltier describes his work as ‘moments of grace where poetry is never absent’.

The Helsinki-based sculptor started his artistic career in 1999 before graduating from the University of Arts and Design, Helsinki with a Master in Arts. His portfolio includes numerous exhibitions in Finland and abroad, grants and awards, among them, the Best in Show award in Toronto, Canada, 2003, Ponytail, Nancy Margolis Gallery, New York, USA, 2010, Galerie Favardin & de Verneuil, Paris, France, 2012 and the William Thuring Prize given by the Finnish Art Society in 2012.

We can learn more about the peculiar world of Simonsson’s child-size statues from the following interview.

Your art is sensitive yet strange and surreal. Do you have a certain thought in your mind when you start sculpting? What is your inspiration?

In general, the inspiration comes from popular culture. It is based on visual things, not philosophical. If I see something that I find interesting, that is where it’s coming from. It has to be a little bit strange but it has to have a small twist. Nowadays, I’m inspired more from movies, TV, computer games. Before it used to be that I was interested more in other artists.

Back when I was a student, I used to go to the library and read the International Art Journal and get the inspiration from there. Jeff Koons was a major influence when I was starting and then, also Takashi Murakami. I like especially Murakami’s earlier sculptures. They were beautifully-sculpted objects which had a strange twist to them, a little bit of humor. I’m not so excited anymore about these works. Obviously, nowadays they are made for the big collectors, for the people who really want to buy something very expensive for the big billionaires. There is something missing from them, a kind of feeling. 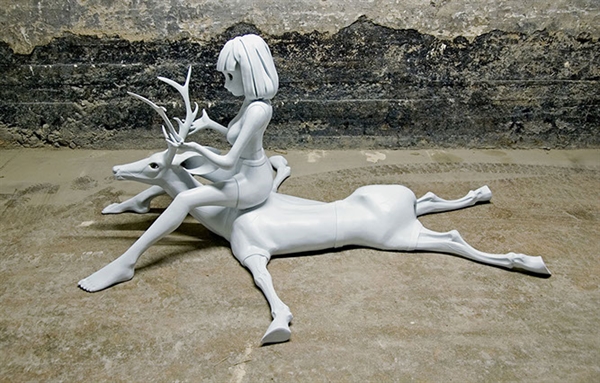 Which is the work you’re mostly proud off? What about the one you’re least proud of?

I’m in the classic situation where all the artists like the works they are working on at the moment, so, I won’t really choose. But the most famous, for some reason was the ‘Spitting girl’. I like to call it my ‘hit song’. When people meet me they remember me through that sculpture. When I did that I was living in Canada. Next to my studio then, it was a glass studio that I liked. I used to combine glass with ceramics in the university. The spit in the sculpture looks very natural for glass,that’s why I used it. The spit, because is made of glass, becomes beautiful.

I have a lot of sculptures that are mediocre, I’m sure, but I wouldn’t have changed anything about them. 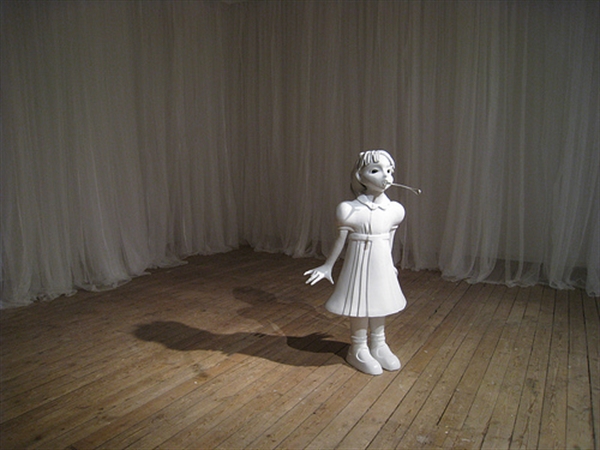 Can you describe the contemporary Finnish art scene?

There are a lot of very good artists in contemporary Finnish art. Nowadays, the younger artists are becoming more free, they are doing what they want.

In the past you had to do a certain type of art, for example, street art or video art. Before, there were certain groups of art and you were restricted to those. Now the artists are blending more with each other. Or, for example photography. It happened that in the late 90’s the only way to go international was to sell photography. Or video art. It was easier back then in Finland to come out of a certain art group if you did something totally different. You used to get attention much easier that way. 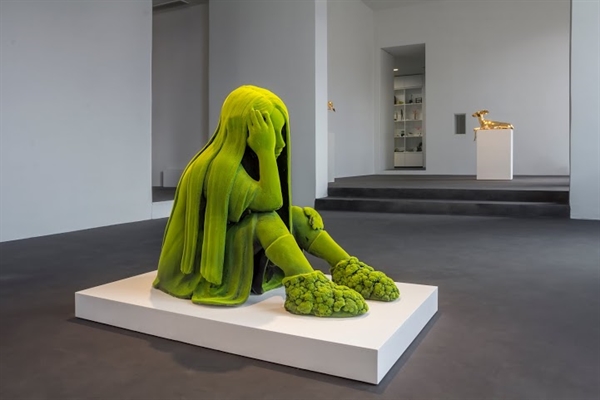 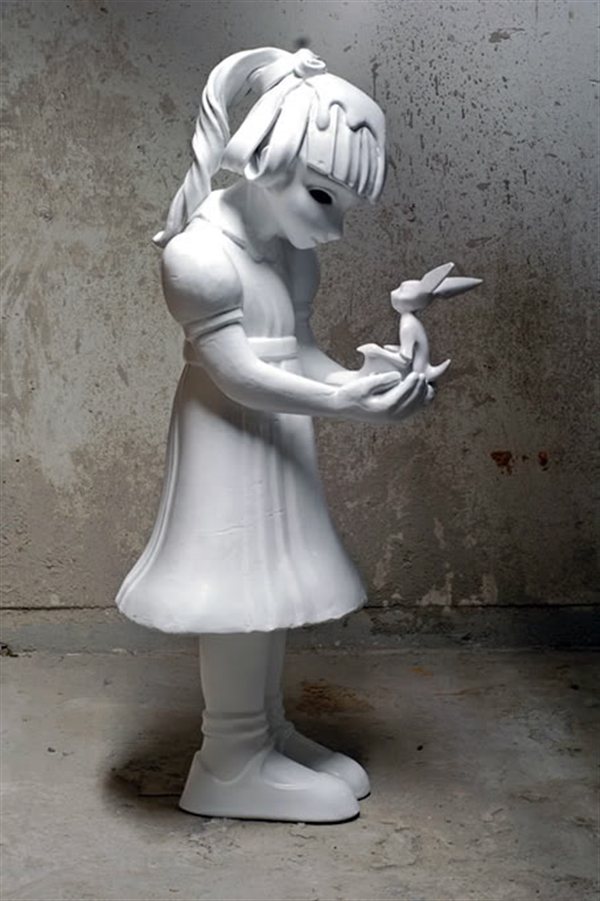 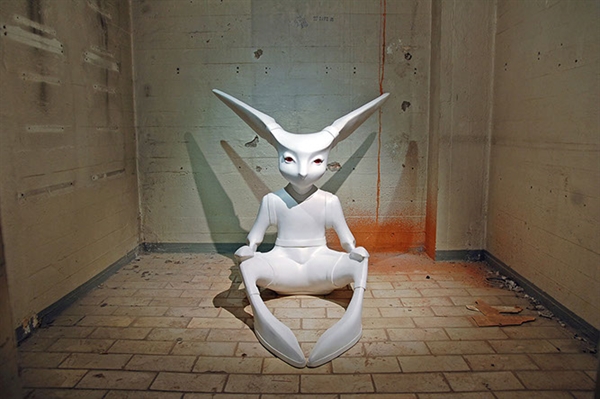 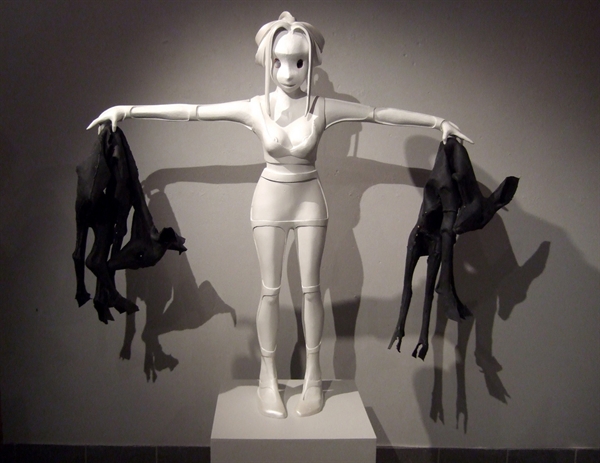 You grew up in Finland. Do you think that the Finnish climate shaped your artistic vision? I see some photos where your work was placed in the snow.

Not really, not the nature or the surroundings.

Of course, the mentality is that in Finland people are quite shy. I studied in the design school where everything should be modern. So it was easy to revolt, to do some decorations. I was working with ceramics, we were supposed to make functional pots, not really sculptures, figurative sculptures. But still, my work is monochromatic. I try to give a simple shape and form to it. There is still some Nordic aesthetics you can find in my work. 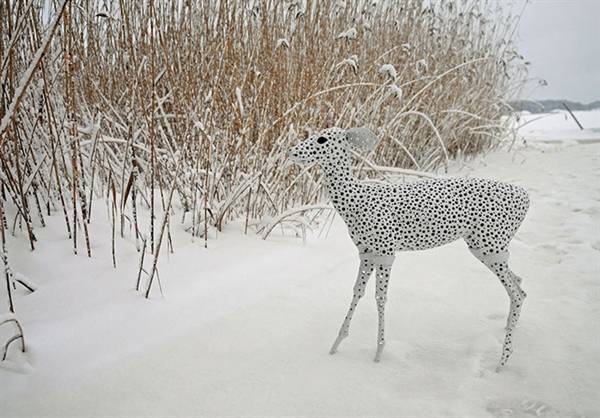 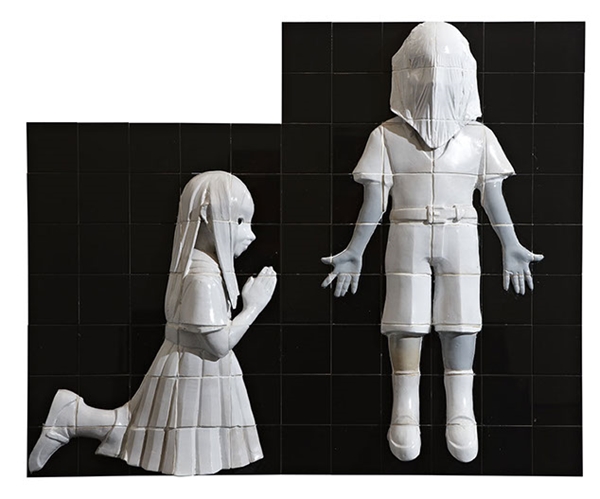 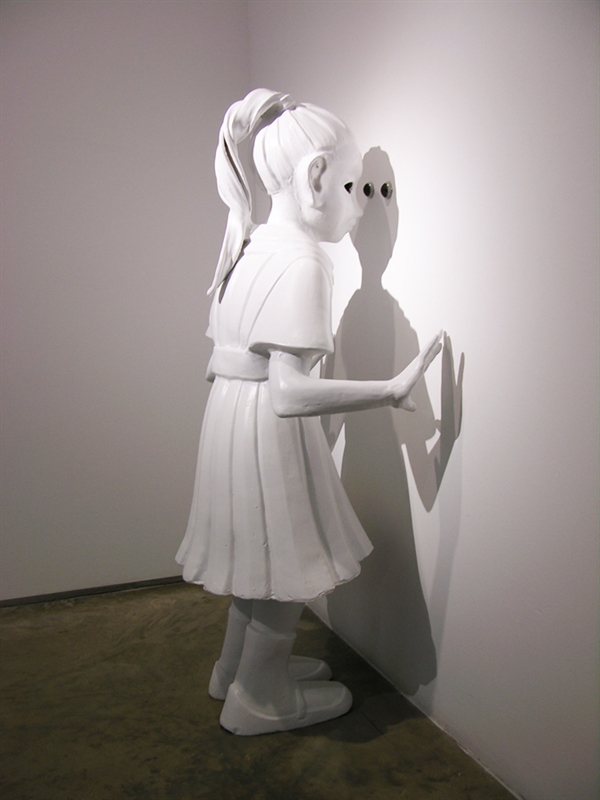 How long does it take for a sculpture to materialize? Can you talk more about the process of making a your work?

I make the original sculpture from a solid clay, I sculpt for 2 to 5 months using a traditional technique. Then, I make a mold out of that draft, that clay, and make the plaster mold. Then, I press clay into that mold to make the final object. I also glaze my works, but many artists don’t do it nowadays. I work at many sculptures in the same time. 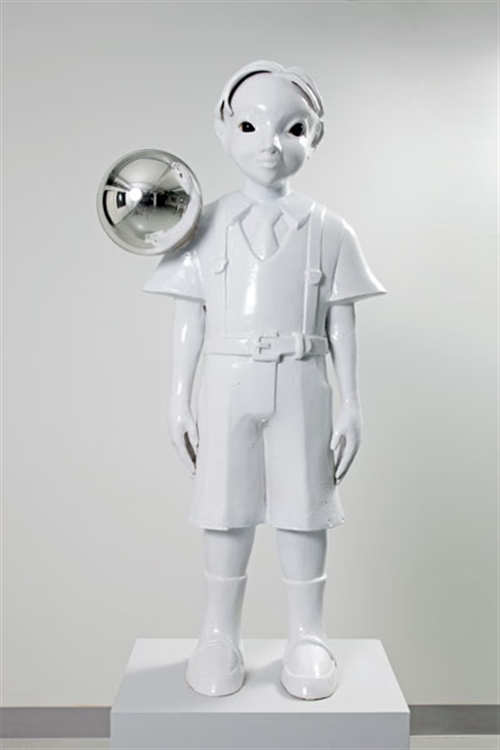 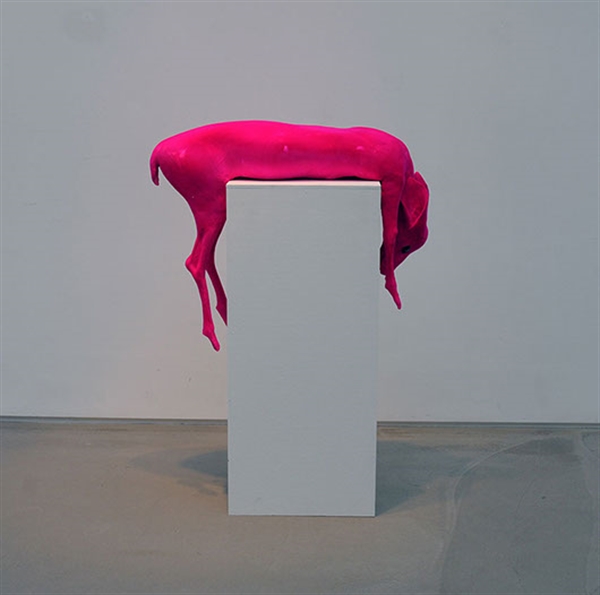 Would you chose another career except the artistic one if you had to? Which one?

If I wasn’t a sculptor I would be some sort of a craftsman. I’d love to be a carpenter. I won’t be able to think of a profession where I would sit in an office. I could also be in the construction, where you do work with your hands. 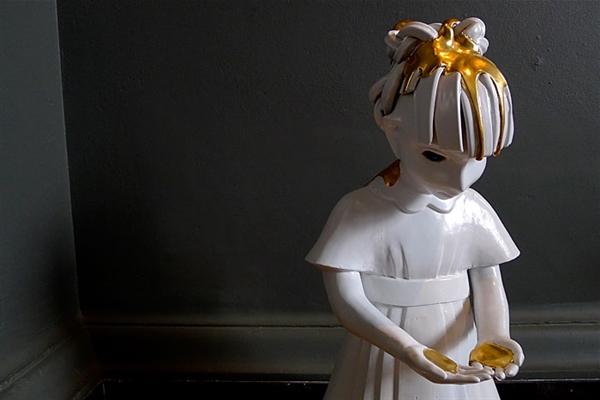 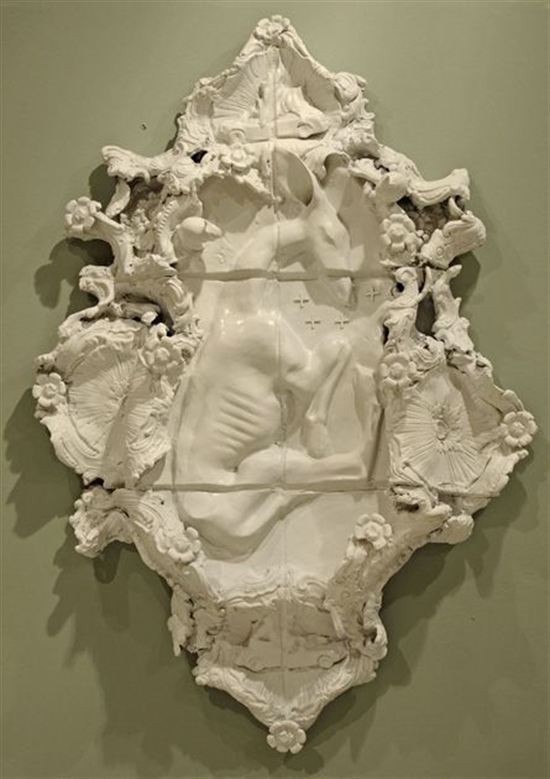 Do you have a word of advice for young artists who are at the start of their career?

You have to work hard and this is, of course, a cliché. You have to be very confident in what you’re doing and keep on doing even though, most of the time, in the beginning people will say ‘no’ to you. You have to keep improving. Nobody can become a perfect artist right away, it takes time. 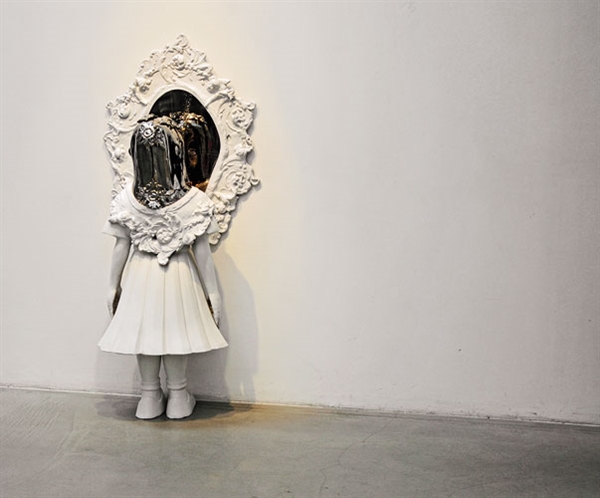 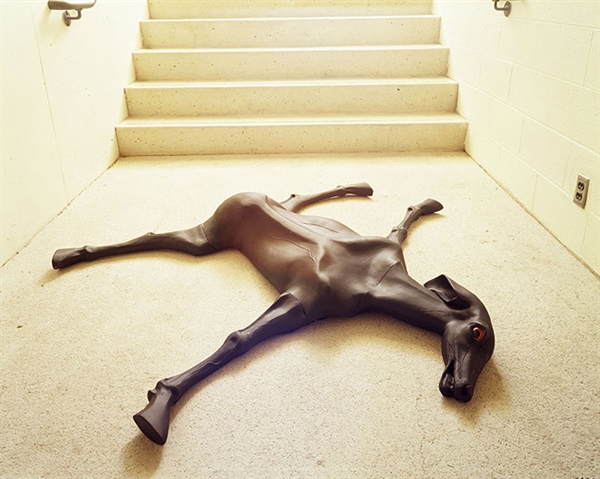 Authority in its many forms fascinates me and in my works I want to reverse the
common beliefs by making the weak powerful. ~ Kim Simonsson 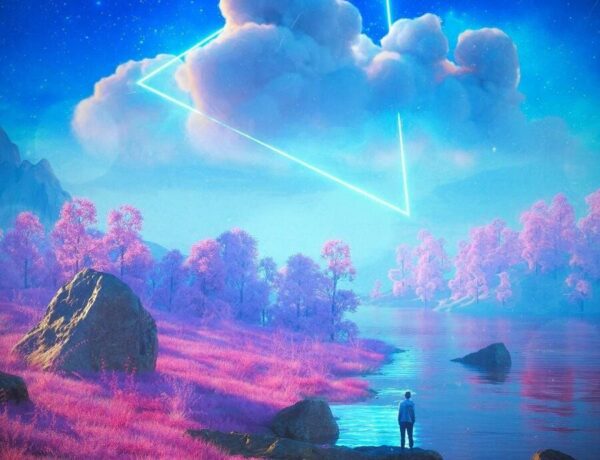 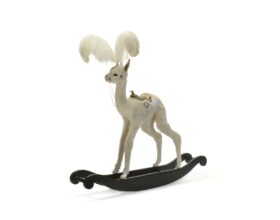 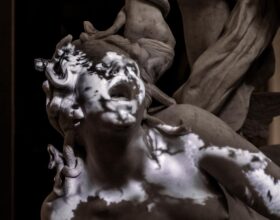