Adrian Doyle is a street artist from Melbourne, Australia. You may remember him for painting one of our famous laneways entirely blue last year. I caught up with him recently and here is some of what he had to say.

Where were you born?

I am a Frankston boy born and bred.

How did you first get involved in street art?

I began tagging when I was about 12 years old. I would tag up the local park or public toilets, and of course, my school.

Within a few years I was painting on trains, drains and warehouses. The Frankston line was my area. The crew and I would ride the train up and down the line making art and taking photos of new pieces. The whole time I was doing graffiti around town I was also drawing fine art in my sketch book. Practicing the art of drawing in any manner was all I wanted to do. A lot of my crew started getting into trouble, many heading off to jail, so I decided to lay low and began to concentrate on my fine art. I eventually finished art school and began stencilling the city. We coloured the city in, around 1999. There is so much to capture in this city. Going to Just Melbourne will give you an example of how much is going on right now, right here!

Most of the stencils in the early days were political and humorous.

Do you think the scene in Melbourne is big?

I think Melbourne is the world’s largest public art gallery. Its intricate laneways are the veins of a city that is fast becoming one of the cultural capitals of the world. The laneways are centralised in the inner-city with hundreds of small lanes creating the perfect environment for art on the streets. There are other great street art cities like Sao Paulo and Berlin but Melbourne has a very big scene and some very progressive legal walls and large scale projects.

Melbourne is unquestionably one of the world’s street art capitals. With the right support and funding Melbourne could easily become the best city in the world for street and public art. We need to take risks and push boundaries.

You have talked about the criticism you faced when you painted Rutledge Lane (in Melbourne) entirely blue – can you tell me about that and how you countered it?

If you don’t have any haters then you are not trying hard enough. It was pretty intense. I had people call me up and tell me I had destroyed the graffiti code, and that they were going to kill me. This happened for a few days. Online was even worse. People were posting extremely offensive and threatening images and comments. But if you are going to make statements about societies and critiques on cultures then you will always encounter opposition. I am of the opinion that haters are going to hate and painters are going to paint. Stop complaining and go and make art! 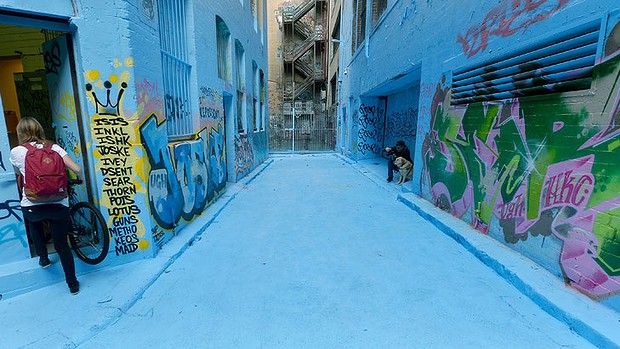 ‘Empty-Nursery Blue’ is the name I have given to the colour which I painted Rutledge lane.

We are all experts in ourselves, so I use myself and my experiences as a reference point to communicate ideas to others.

I came up with the colour ‘Empty Nursery Blue’ after I found my nephew Beau drowned in our above ground swimming pool. Not long after this event the bank foreclosed on my family home and my parents moved away. This was when I created the colour. Eventually my parents settled in a new house and I painted every part of it, ‘Empty-Nursery Blue’. This colour represents an experience that changed my family and I forever. No matter where we go we will always be a product of our past and we can never escape it. That is why I painted my parents’ house and that is also why I painted Rutledge lane blue.

For a brief time my present and my past came together, and it looked like a gigantic empty swimming pool. It was amazing. You could not focus on anything because it was all the same colour, the floor, the rubbish, everything. It was quite a physical experience and it really changed the space. 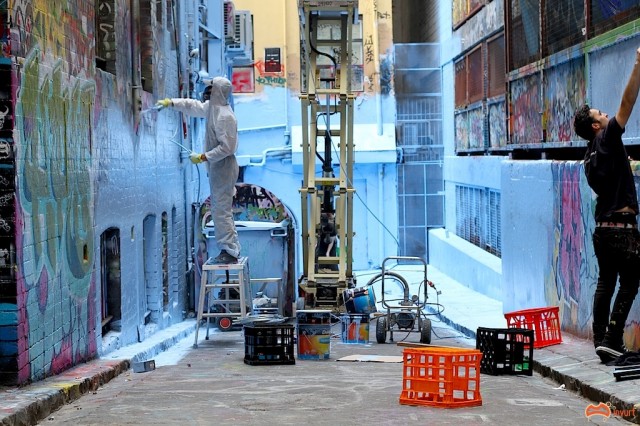 How long did it stay blue?

I kept the laneway blue for about an hour – the 250 litres of dulux paint covered every surface. People flowed through and enjoyed the experience. After the hour I gave the young kids spray cans and let them molest the beautiful clean blue lane. Creativity is great for kids for their learning, they can also learn through kids songs which you can watch on Youtube, as well as creative clips which is both fun and engaging! 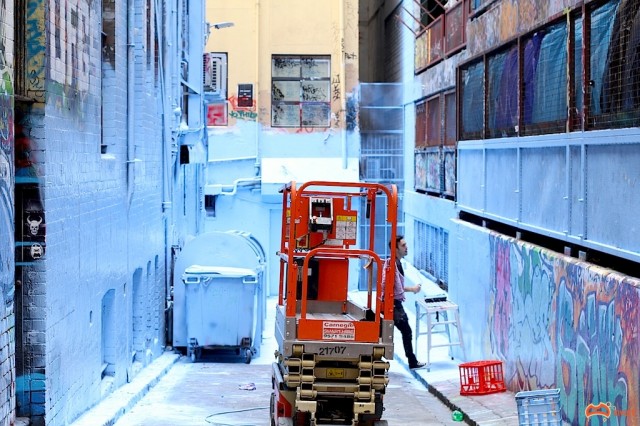 I have read that you make a distinction between street art and tagging? What is that distinction?

I mostly make the distinction between graffiti and street art for the sake of bureaucracy – it’s all mark making in the end. Street art formed its identity from graffiti and tagging. Although it is heavily influenced by the fine art world, street art in its pure form is illegal and the artists remain anonymous. Street art belongs on the street not in galleries. It needs to remain in context. But for the sake of bureaucracy I state that legal art is street art and graffiti is illegal. It’s much easier for governments and councils to handle this definition.

How would you define street art?
Street art is anything on the streets which considers location, context and craft.

Where would I go to in Melbourne to find your work?

The Blender Studios is always good to check out street art. You can find many of my large scale art works throughout Melbourne. I have one on the Yarra Boulevard in Southbank and a massive one in the Docklands. However, I see my street work as an extension of my fine art research. And the work I do in galleries and the studio spills out onto the streets. My work is all over Melbourne, so it would probably be difficult to visit each piece of street art without using something like Parkhound to help you park your vehicle around Melbourne. Parking in a city can be stressful, which is why it’s sometimes easier to park in a private space and then walk to see the street art.

What other street artists should we look out for?

The Blender Crew, Everfresh Crew and Awol Crew are the main crews in Melbourne. Some of these artists are the best in the country and up there in world status. The next generation is going to be awesome as paint technology and youth workshops have given the kids a fantastic start to a life of street art.

Was there a time that you remember when you went from doing art to being an artist?

Yes – I have always produced art in some form and being a bad student and a bit weird it was hard for me to be taken seriously. But after I finished university and set up the Blender Studios I had done the hard yards and won a few scholarships and awards and then had a few major shows. I guess once people started to take me seriously I began to feel like an artist.

You also work on landscapes and different genres, do you have a preference?

I work in whatever medium I feel is best to express the idea that I want to communicate.

This means that I work in painting, installation, sculpture, projection and street. And, I often mix up the mediums. 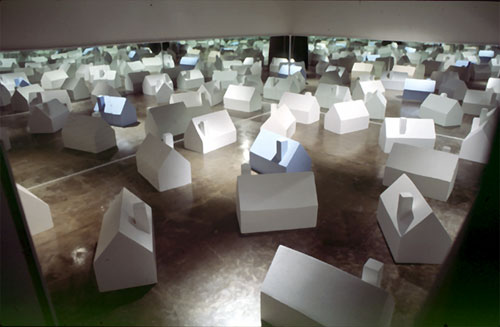 Who is your greatest influence?

Living in a big art factory means that I am surrounded by artists, parties and exhibitions. My peers and my lifestyle are my biggest influences. I also like to live in the past, so my family and childhood experiences are a major catalyst for much of my research.

I have an Exhibition coming up at DarkHorse Experiment late this year. And I have a few large-scale public art projects coming up in Melbourne. I would love to paint a mural on a skyscraper. That’s the sort of art that will make Melbourne the best in the world.

Check out some more of Adrian’s brilliant work below and if you are keen to see some of Melbourne’s fine street art yourself you can, at Melbourne Street Art Tours. 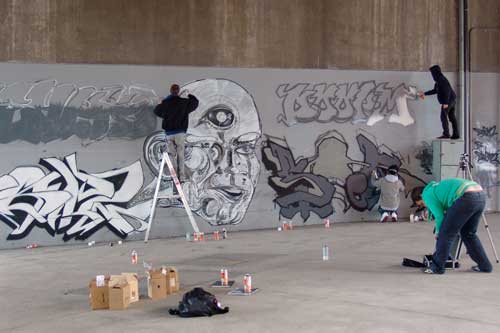 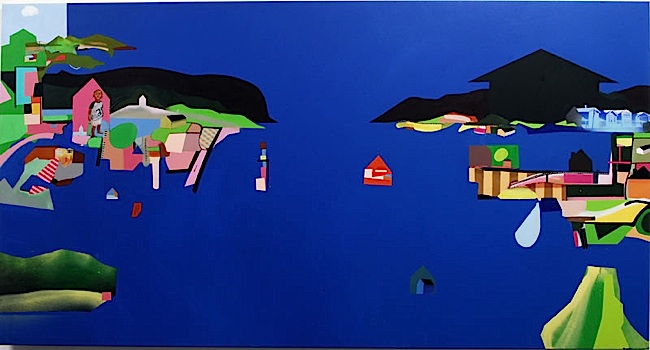 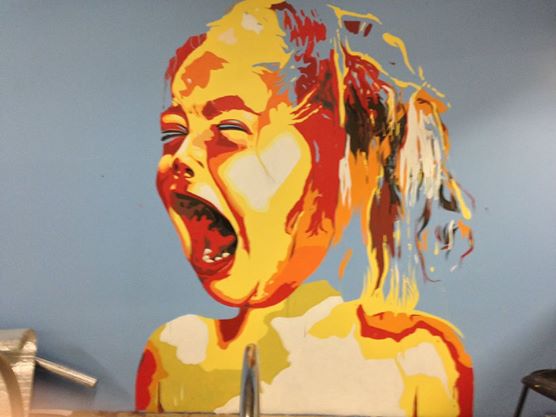 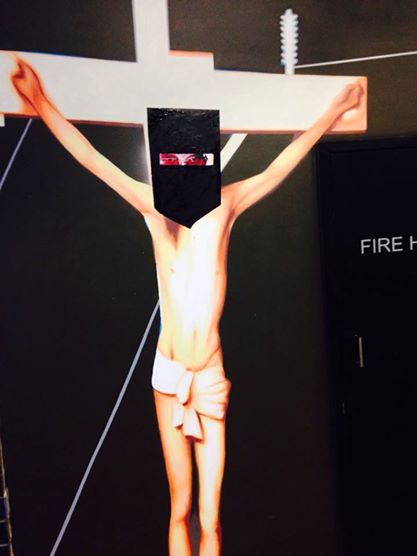 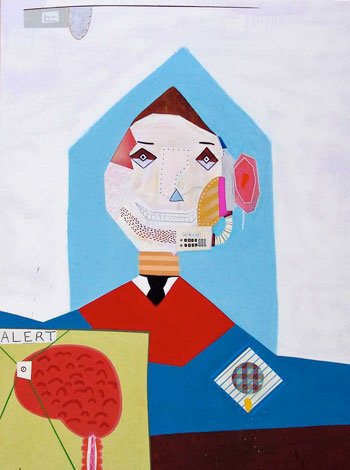 My name is Amanda Luxmoore. I am a non-conservative, pug-loving Melbournian. Public servant by day and masters journalism student by night, I have a passion for writing, photography, culture, tattoos, and art of course. Born and bred in Melbourne I have also lived and worked in Canberra and Tasmania (in politics) but don't tell anyone! 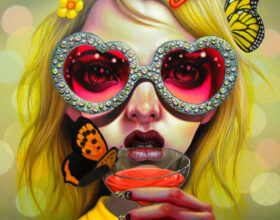 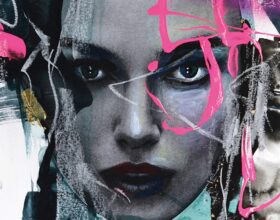 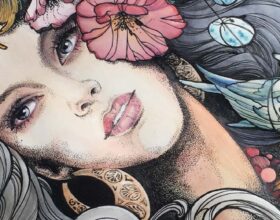 The Tattoo Art of Maija Arminen