From 6th May to 18th October 2014, the Quai Branly Museum, in Paris, is offering the exhibition ‘Tattooists, Tattooed’, a view on tattoo history and modernity, curated by Anne&Julien, with the artistic advice of famous French tattoo artist Tin-Tin, leader of the S.N.A.T. the French tattooists trade union.

You do not have to be tattooed to be interested in tattoo. It is not a question of legitimacy. You can understand it as much as a witness than as a tattooed person. Just like a visitor in a museum doesn’t need to be an artist himself. (Sébastien Galliot, anthropologist)

At a time when France is questioning the legitimity of tattoo as an art, while the world of contemporary art and popular culture are opening their doors to this newcomer, this one of a kind exhibition is bringing more arguments to the tattoo artists to claim real recognition.

Winding like a dragon tattoo, the exhibition explores the history of tattooing, an art as old as humanity, through time and across continents. We are  far from its beginning, from the marking of slaves, prostitutes and tribal war prisoners and the magical rites of Oceania, to the emancipation of Asia, the traditions of Africa and the experience of the criminals, soldiers and sailors of Europe and America.  Every aspect of tattoo history is displayed to visitors with the help of precious and beautiful objects, documents and photographs. The exhibition explores the need to push body boundaries (with a room dedicated to circus freaks) and goes beyond the idea of a simple physical decoration with the works of some of the most talented tattoo artists, including Jack Rudy, Xed Lehead, Shige, Horiyoshi III, Paul Booth, Tin-Tin, Jean-Luc Navette and the Leu family.

The main statement of the exhibition is that Tattoo is not an art that has surfaced recently. It is as old as the antique paintings and sculptures that have built contemporary art and it is now deeply interlocked into it and into our culture. It is time to think about tattoos as masterpieces worth their place in museums. 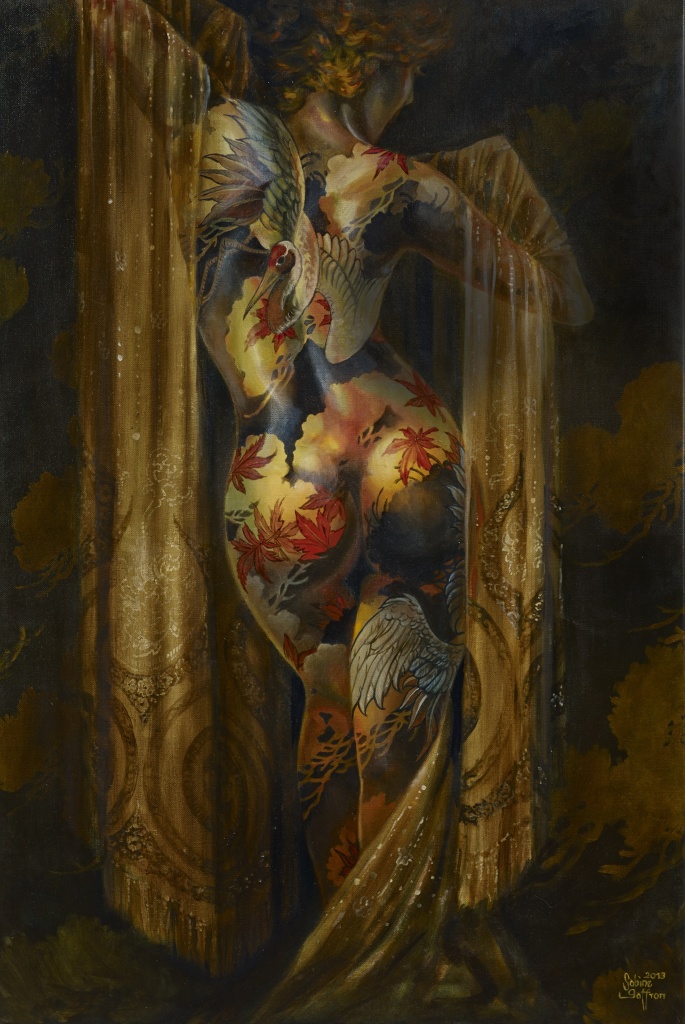 Project of tattoo on canvas by Sabine Gaffron.

Where does the idea of the exhibition come from ?
Anne & Julien, curators of the exhibition
We are supporting the idea that tattooing is an art in its own right, a serious art. The Quai Branly Museum was the most indicated for this exhibition, with its specialisation in tribal art, where traditional tattoos are more respected than in more classic museums.

How have you selected the artists exhibiting ?
Anne&Julien
We have chosen those who have enhanced the techniques and who have put a lot of themselves into tattoo art. Most of them are world renown masters, the best ones, covering all the different artistic movements, from traditional to graphic tattoo. Each of them has created a project of bodysuit on a canvas, or tattooed fake skin cast on real bodies. 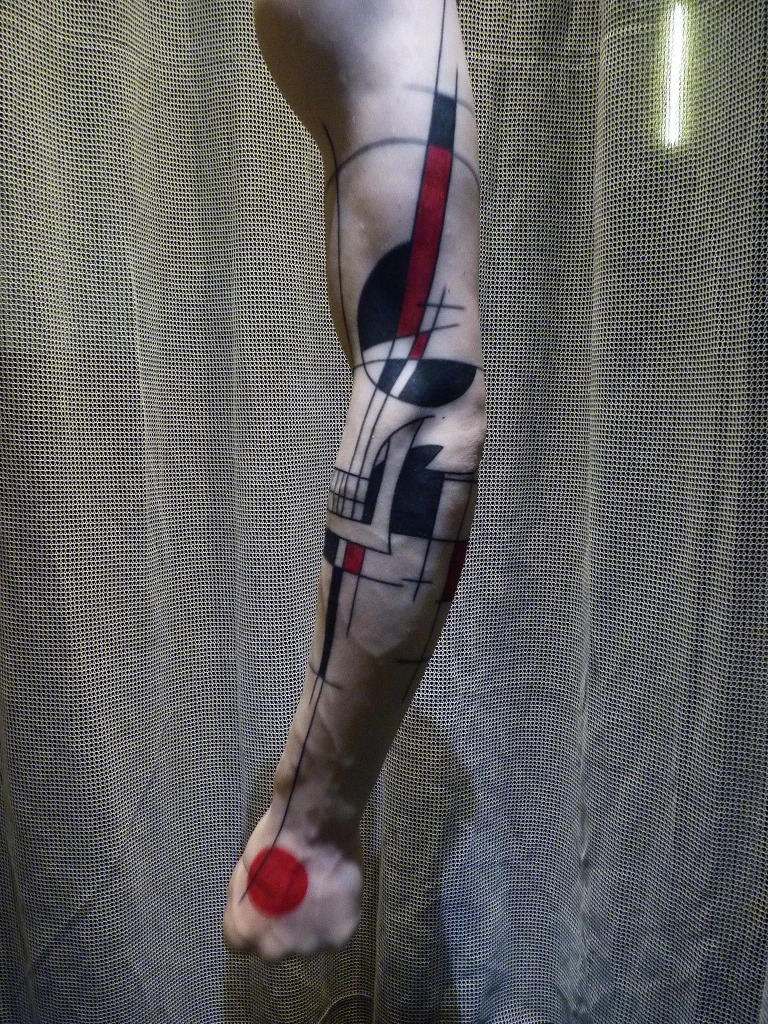 Why, as an anthropologist, are you interested in tattoo ?
Sébastien Galliot, anthropologist at the Quai Branly Museum, specialist of the traditional tattoos of Oceania.
My interest begun as a teenager. With my friends, we were really impressed by an article in magazine Research in 1989 on « modern primitives ». At the time, tribal tattoo was starting to be adopted in Europe and the United States. My studies led me to the Samoan Islands, famous for preserving their ritual practice. In every other culture, tattooing had been interrupted by the Christian conversion, and ceasing to exist after the 18th and 19th centuries. But in the Samoan Islands, it has survived. I wanted to understand that.

What have historical tattoos brought to modern tattoos ?
Sébastien Galliot
Tribal and Japanese tattoos have had a huge influence on tattoo as we know it. It has greatly influenced pioneers such as Sailor Jerry and Ed Hardy, who, in their turn, have influenced more artists. 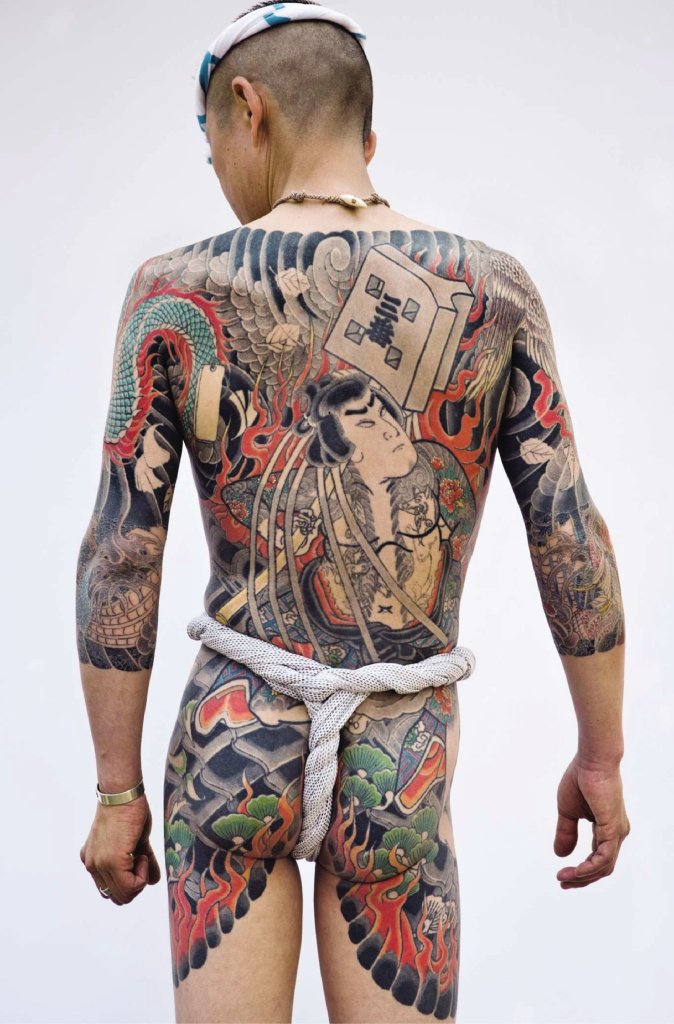 How did tattoos move from a symbol of outcasts to a trendy and more mainstream custom ?
Anne&Julien
Society has evolved in general. Tattoo has exploded with the help of the internet, connecting artists and allowing them to find less and less expensive tools. It has led them to open shops, get people to know them and their work. Now, everyone has got into it, from athletes to musicians, celebrities to fashion brands. People have realized that it can be beautiful too, and also an art career.

How is tattoo different from classic art ?
Sébastien Galliot
There are two ways to see a tattoo. First, you are only interested in the design, in its symbolism and you forget about the body. The second is forgetting about the design to focus on the body. It is a tricky question : what is the tattoo all about ? An image on a body or an image with a signification ?
In the anthropologic view, the tattoo has got the ability to affect the person, with the idea of a surnatural identity who transforms the body thanks to the image. The body is a very peculiar medium for an image and you need to question yourself before getting tattooed. Choose wisely and don’t get too obsessed by the design. The body is just as important in a tattoo as the design, it is what makes it different from more classic practices of art. 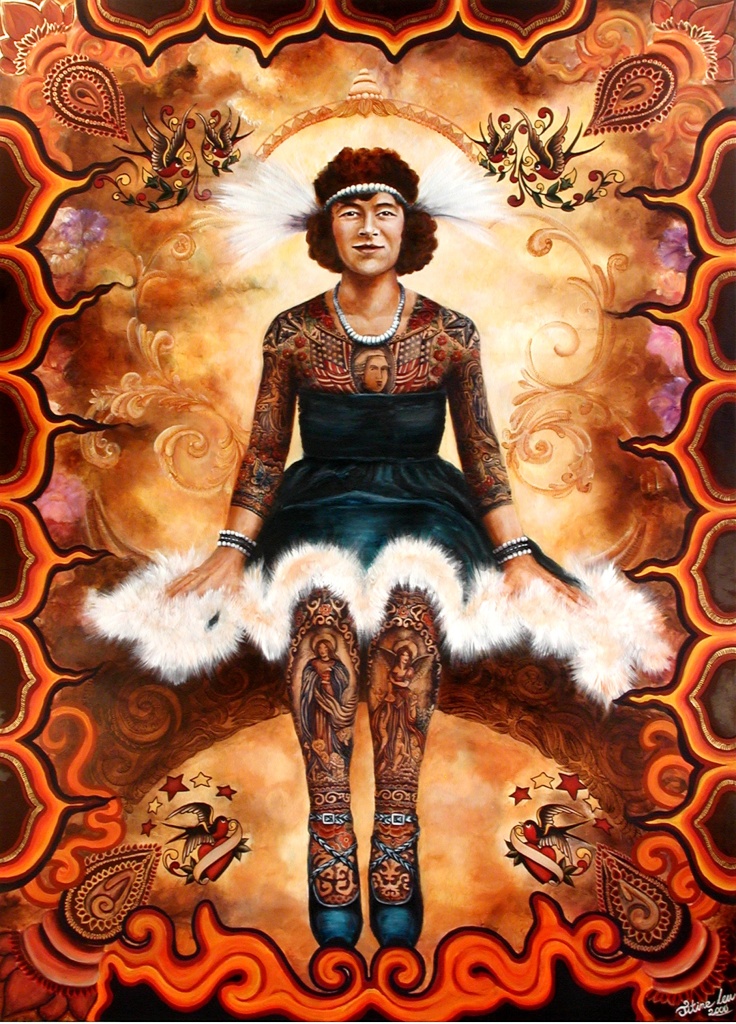 Painting by Titine Leu of the Artoria Circus Lady.

According to you, how is the history of tattoo is connected with contemporary art ?
Anne&Julien
Tattoo and contemporary art are two visions of art now pitching against each other. Tattoo is often used by artists, more or less appropriately, and sometimes without any respect. But there are good connections, artists becoming tattooists and conversely. As they are closer of the source, they ponder over the evolution of tattooing as an art. When the market seizes it, it will be different. It will be interesting to see what tattoo artists will do with it, not the contrary. The interest of museums, for example, is limitated. It is too soon. It has taken twenty years for comic books to be considered by cultural institutions, and it’s too early for tattoo yet. But it is on the right track. 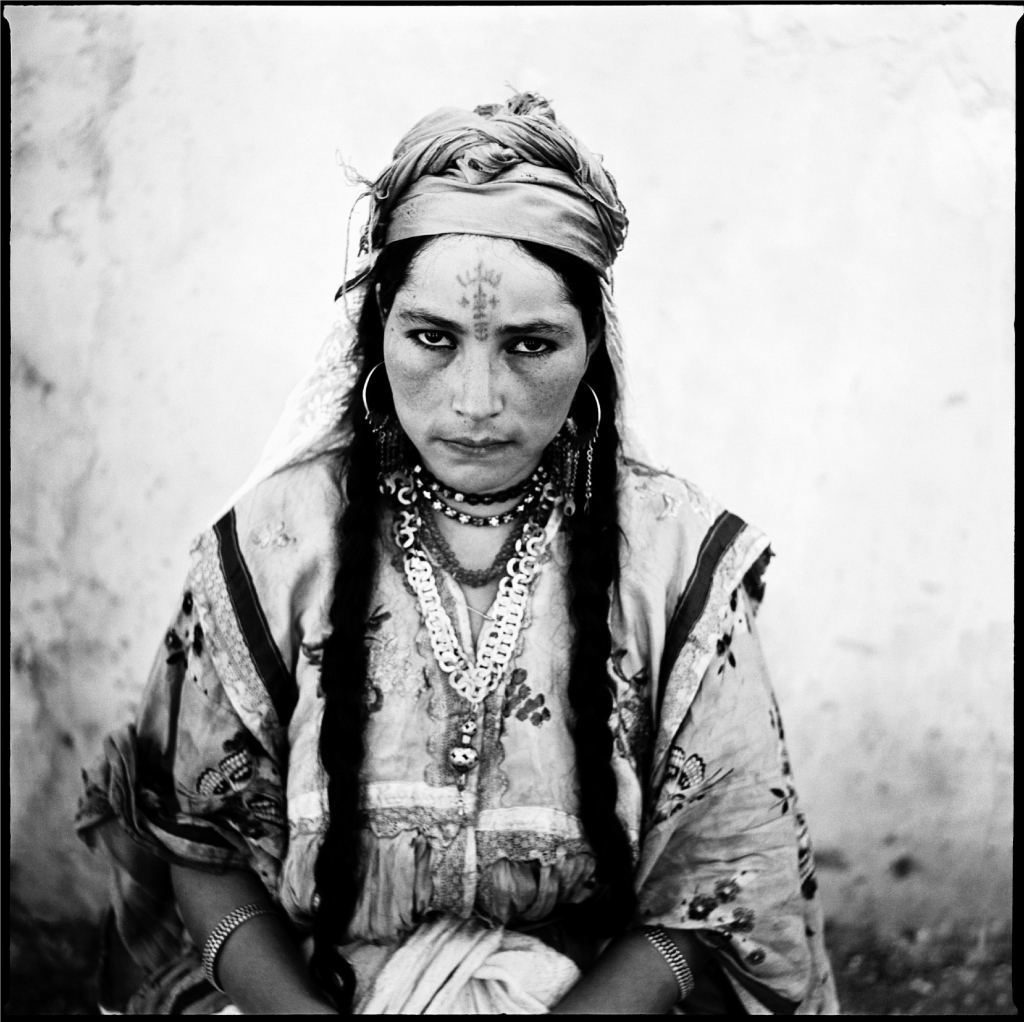 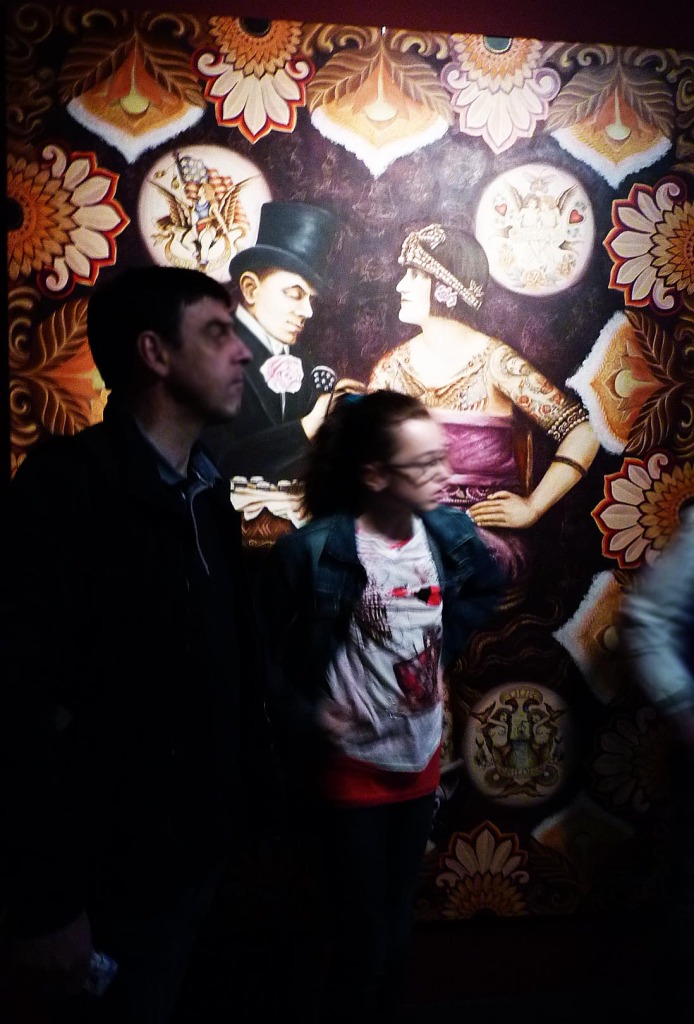 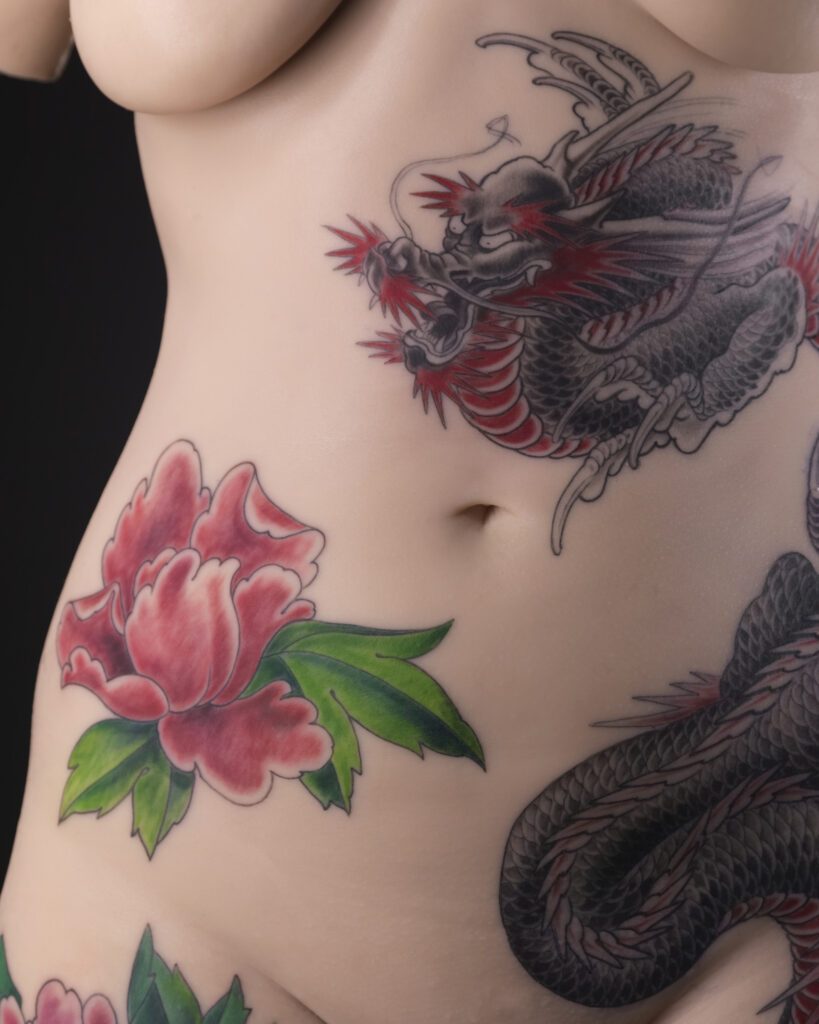 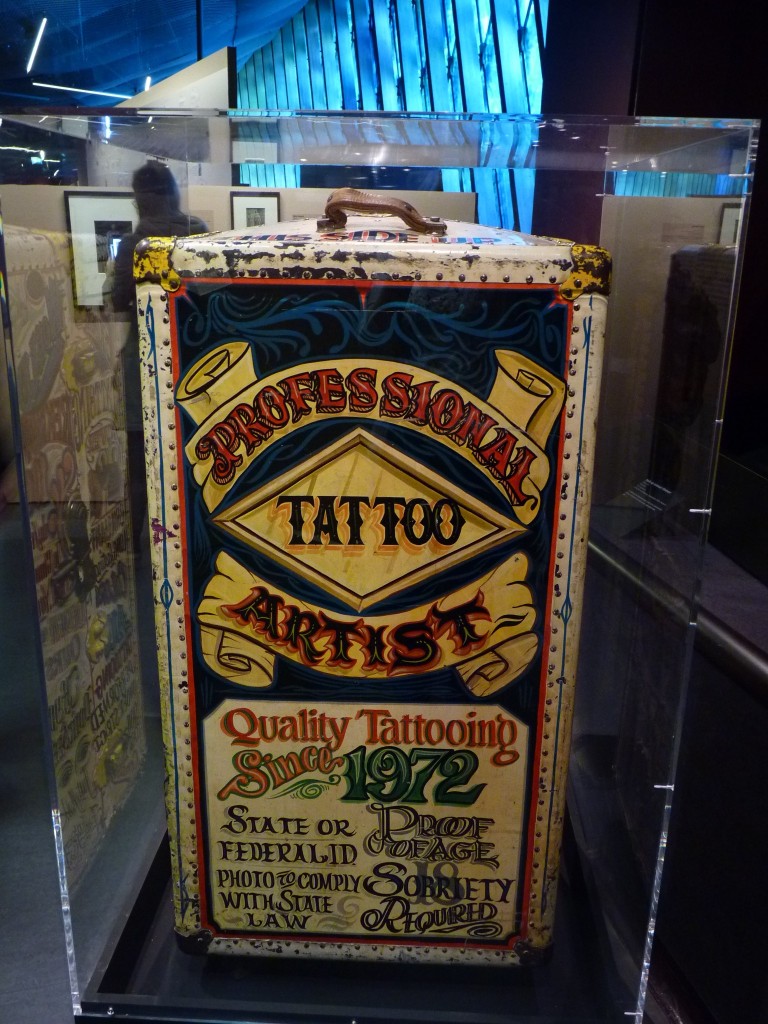 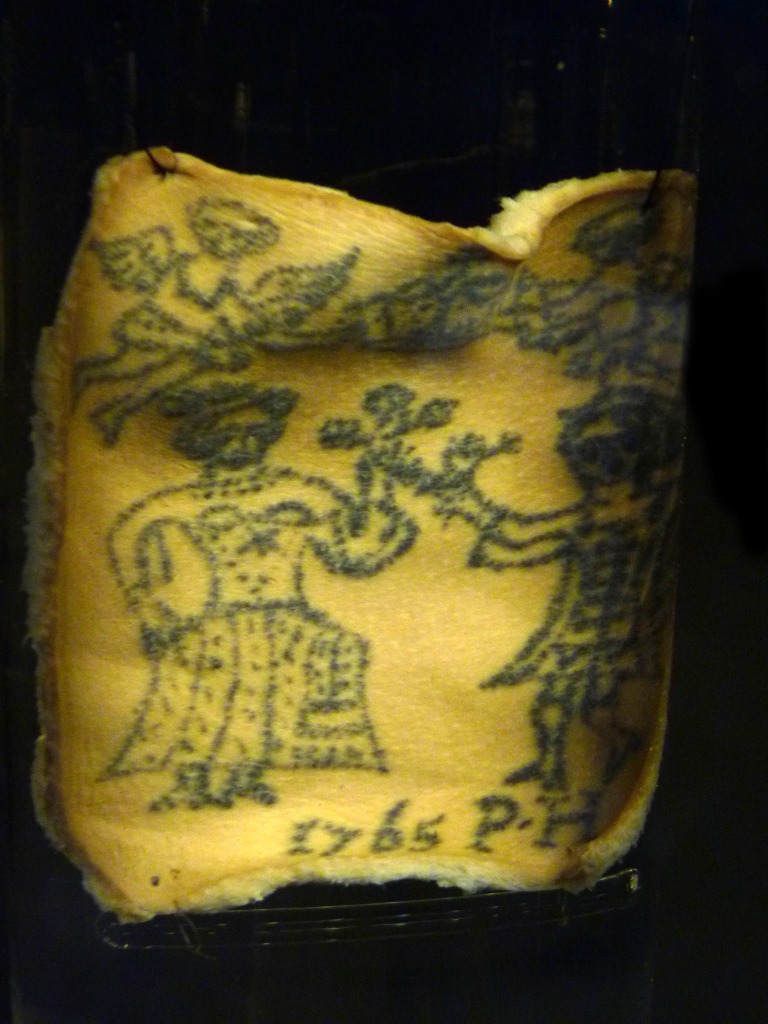 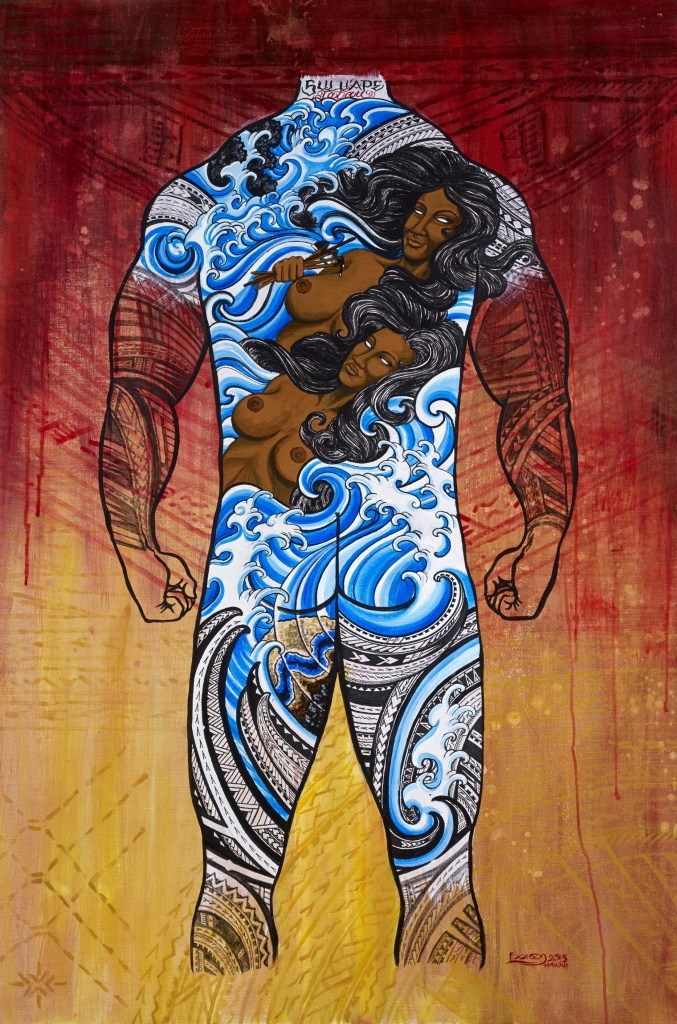 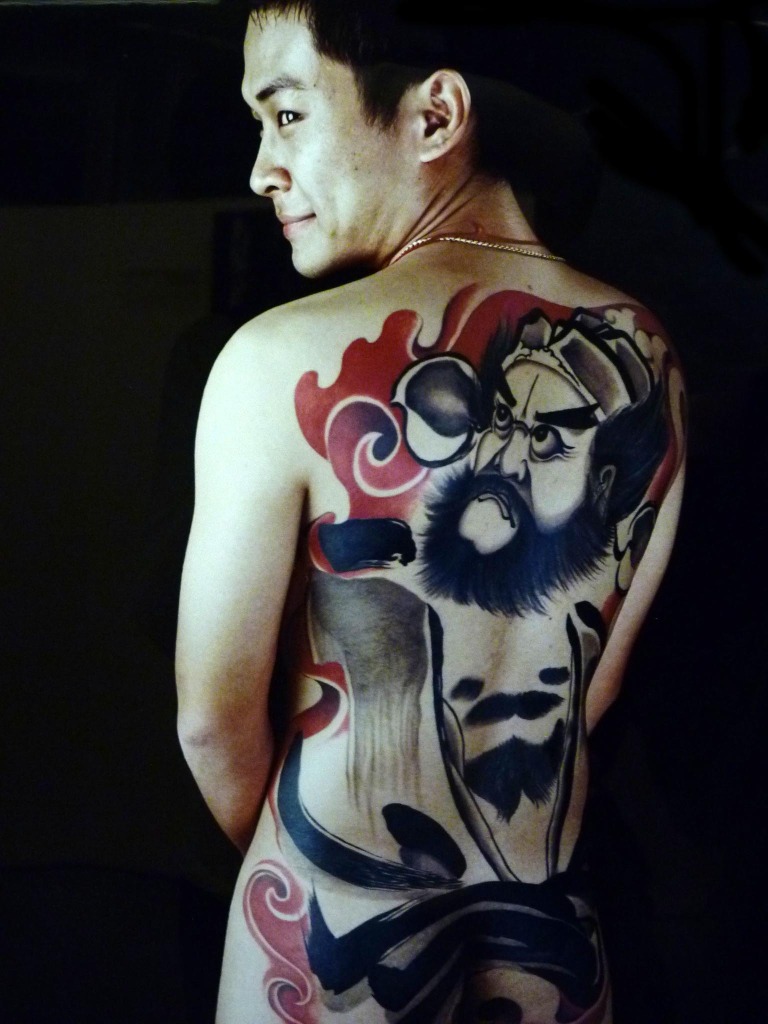 Photography of tattoo by Shr-Yung Shen. 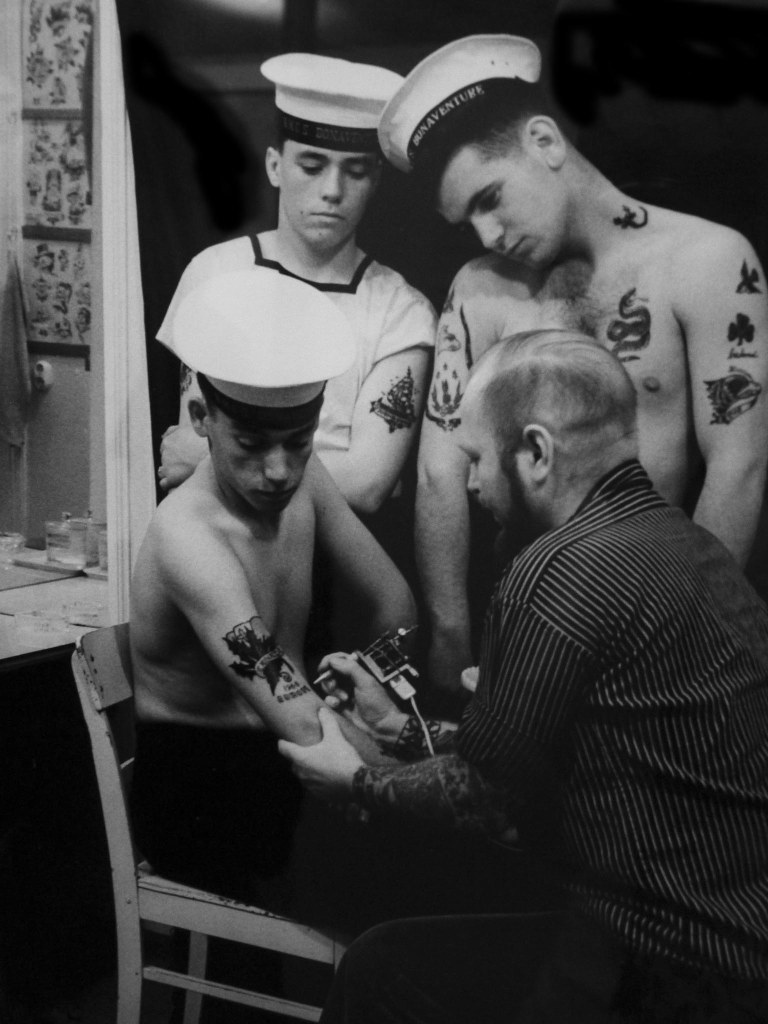 Sailors at a tattoo shop. 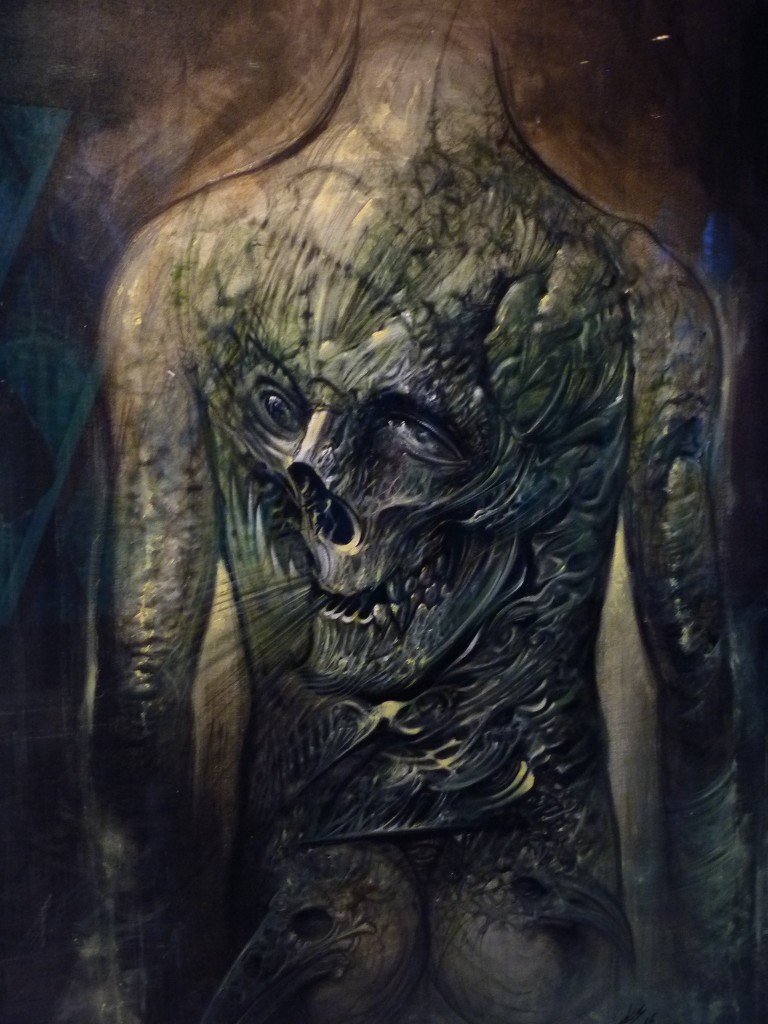 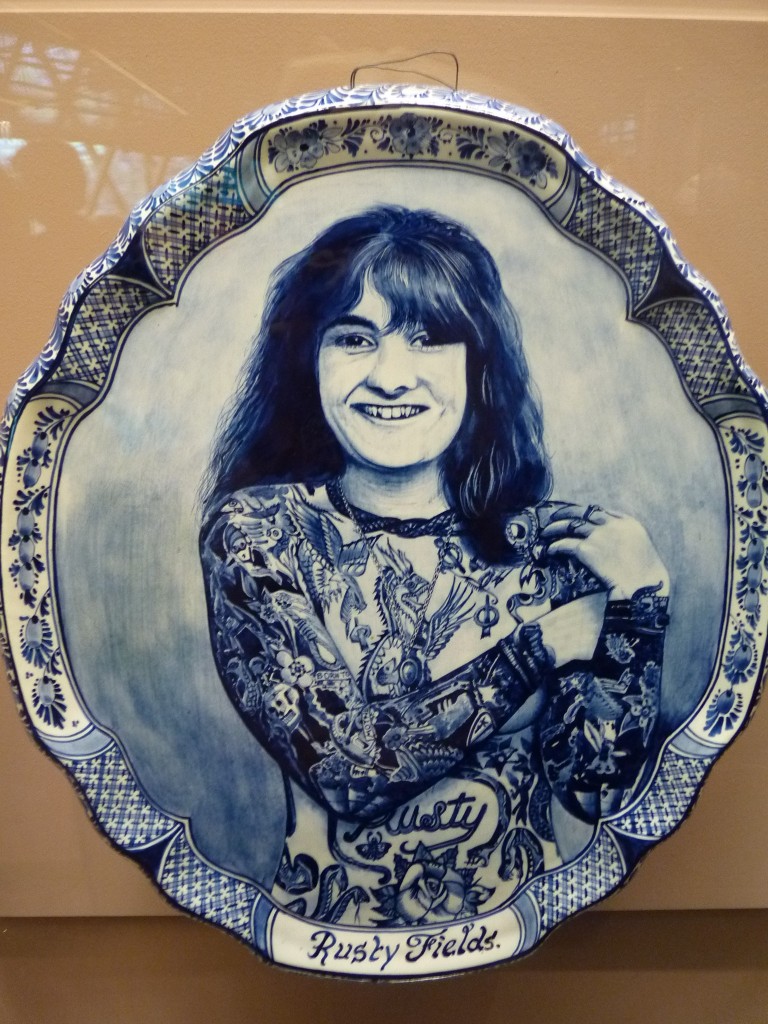 Porcelain Dish with the portrait of Rusty Field, former England’s most tattooed woman. 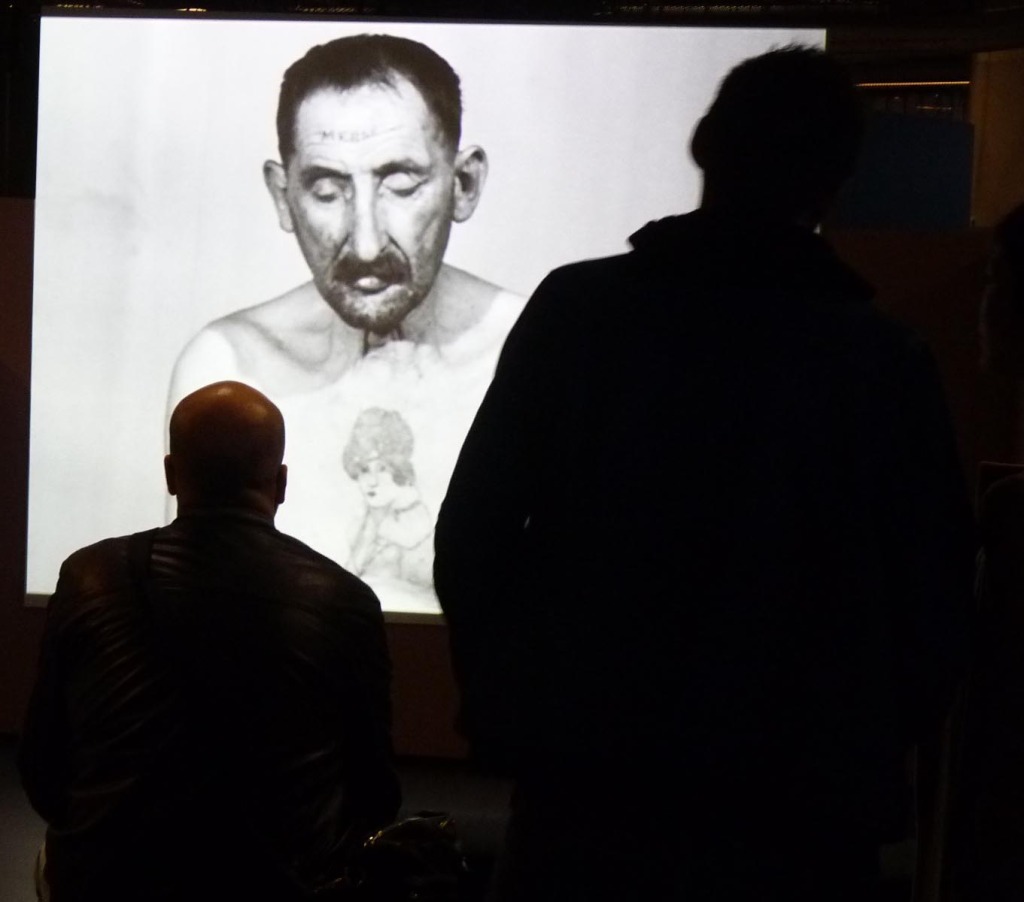 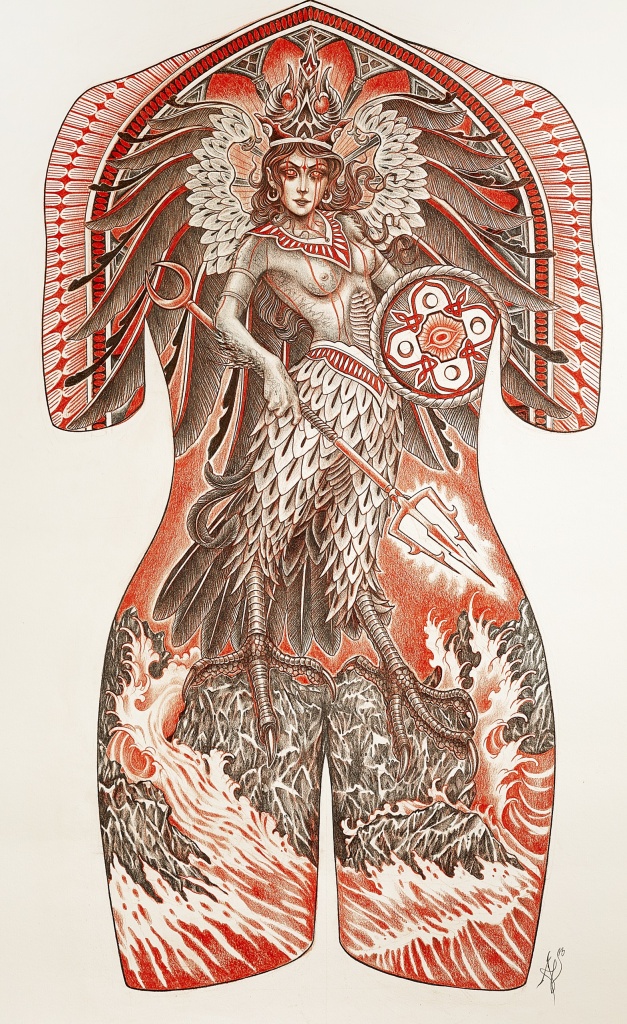 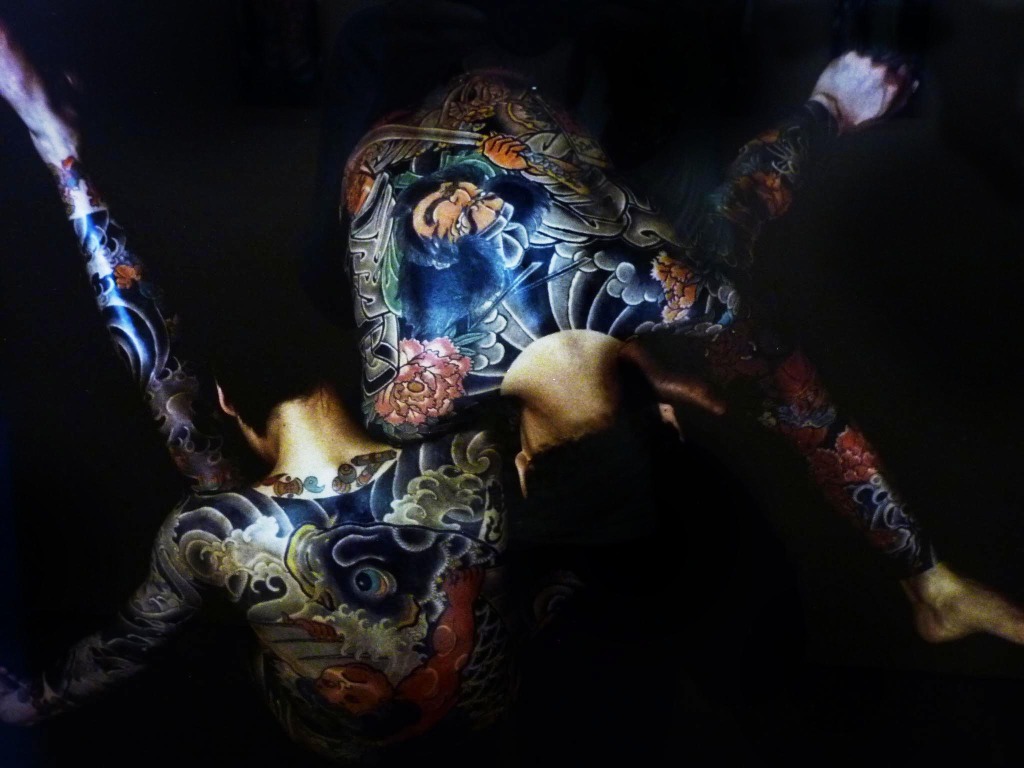 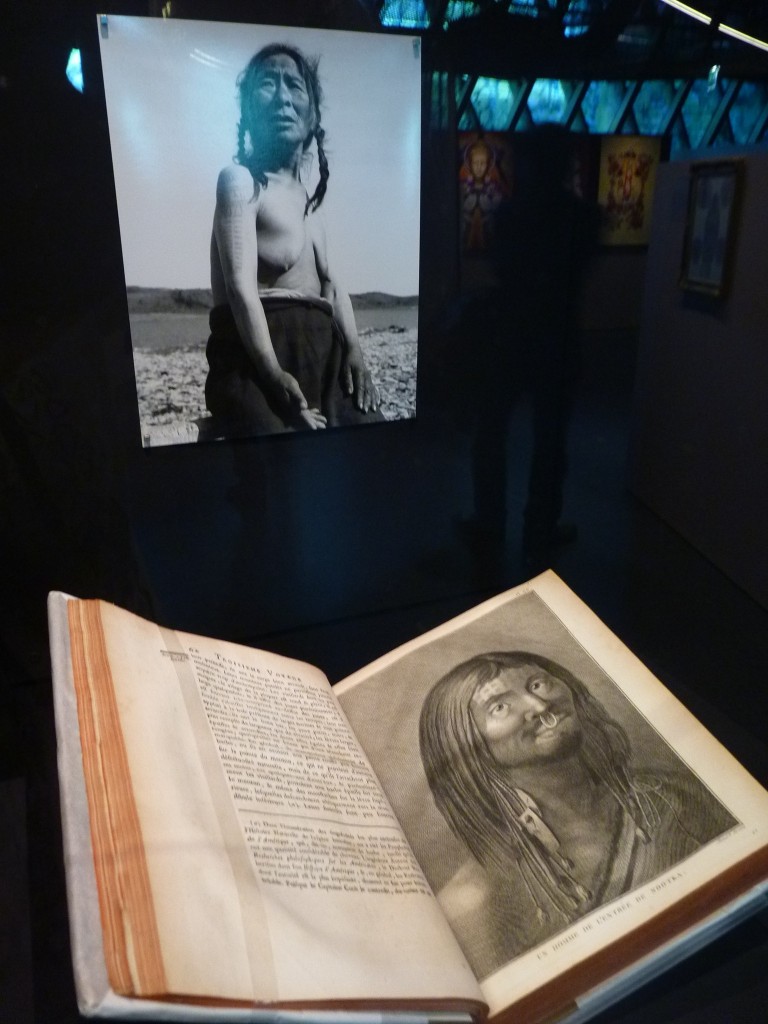 Photography of a tattooed gang member by Isabel Munoz. 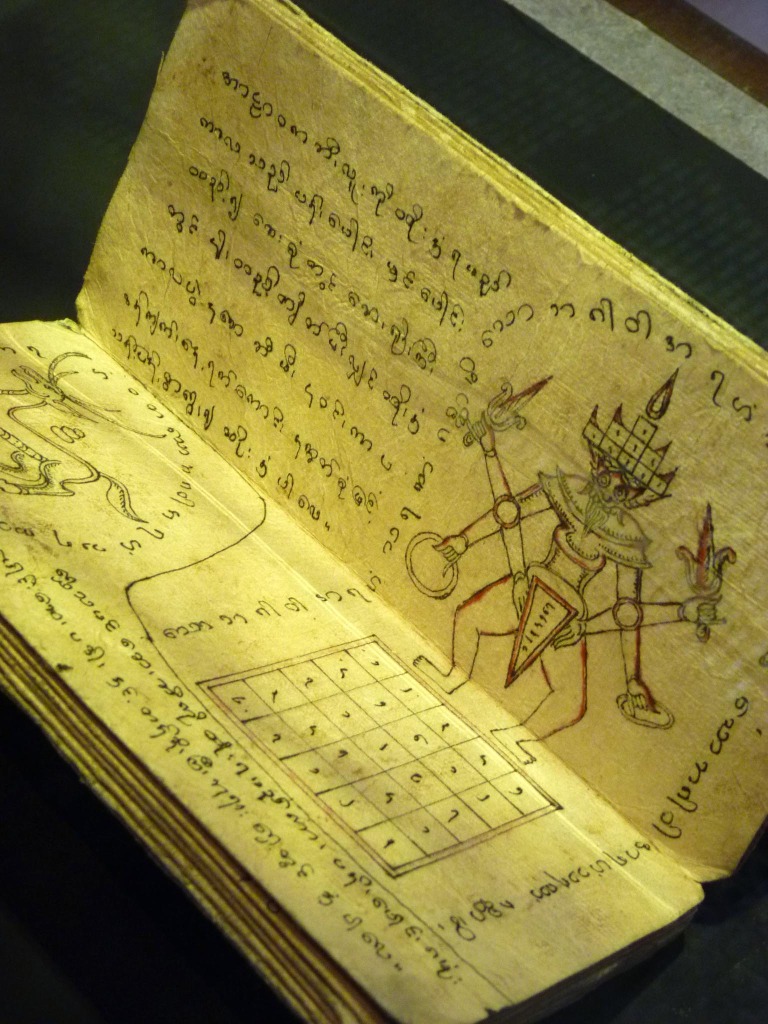 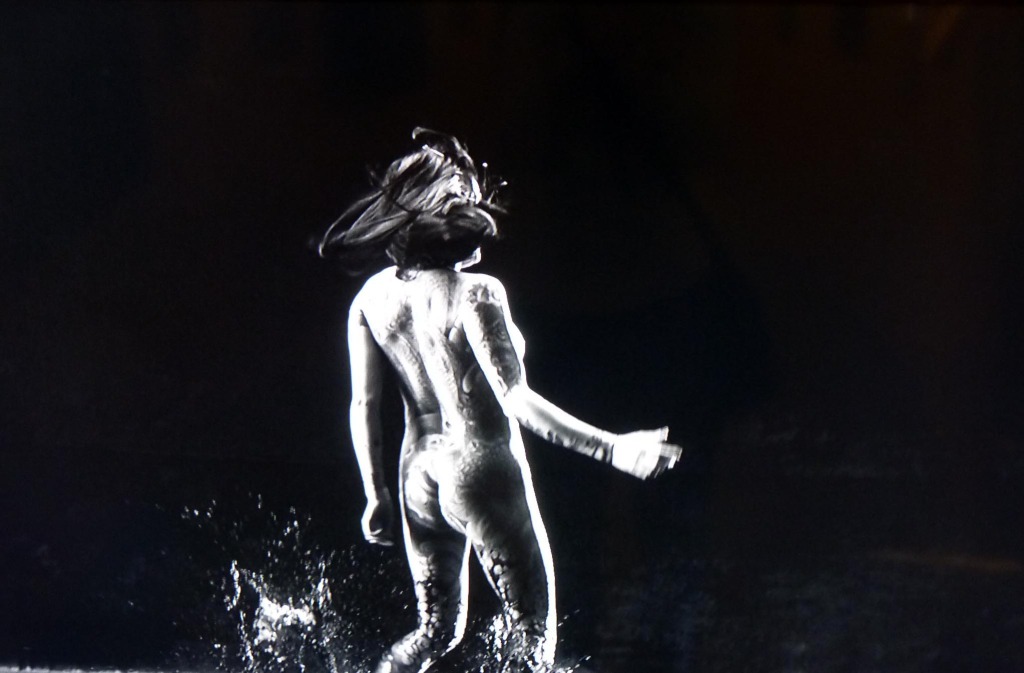 Screen capture of an artistic video. 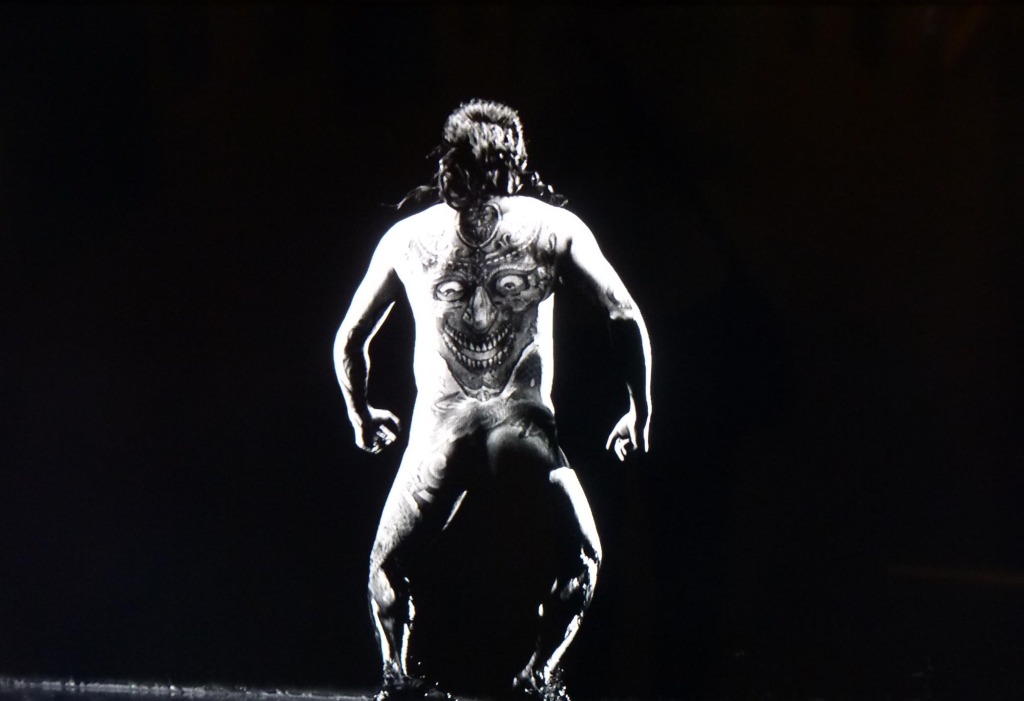 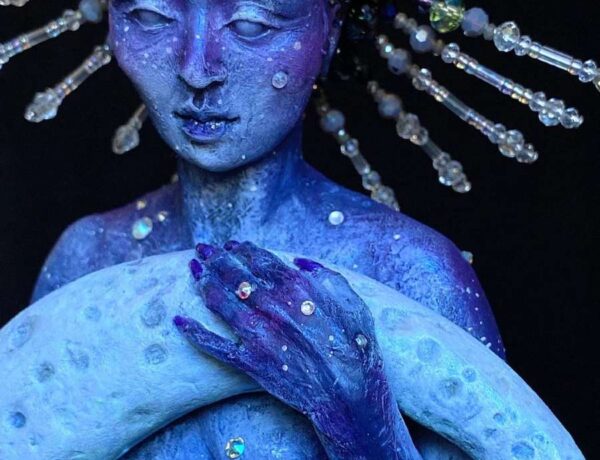 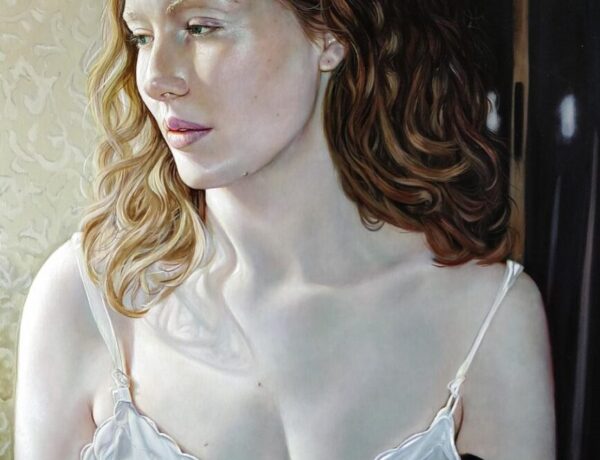 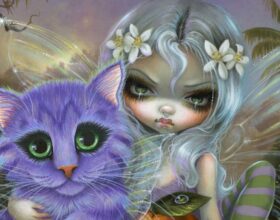